Whole Foods Market gave Rob O'Connor the chance to move back to Western New York after several years away in Providence, R.I., at culinary school.

"I missed the food most while I was gone. After I left, there were so many things that kept popping up, restaurants, breweries. It's become a Renaissance," said O'Connor, 29, a North Tonawanda native who worked part-time in the produce department of the national grocery chain near Johnson & Wales University, moved up the ranks there, and became produce team leader at the Amherst store when it opened last September.

O'Connor relishes ordering fresh fruits and vegetables, and teaching his staff and customers how to put them to good use.

He also still loves to cook.

Brittany Wilson, marketing and community liaison at the Sheridan Drive store, came up with platform to further showcase O'Connor's skills. Once a month – generally at 6 p.m. on the last Wednesday – he leads a cooking demonstration for up to 30 people, providing a non-alcoholic beverage, appetizer, entrée and dessert. The free classes include prep work, tastings and take-home recipes.

"Everyone's kind of a foodie in some way, shape or form in this store," Wilson said. "I love when Rob's cooking. I don't have to pack a dinner."

Q: How do the themes and recipes come together? 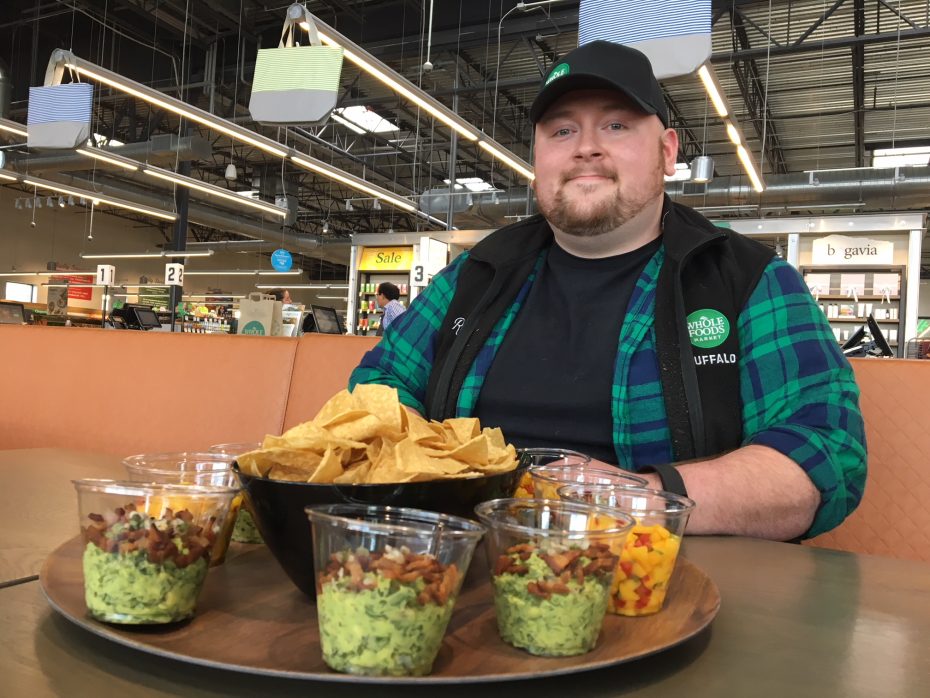 Rob O'Connor featured a Cinco de Mayo theme in his April cooking demonstration. Dishes included a mango salsa with red bell pepper and cilantro, and a Tomatillo guacamole with bacon and grilled ramps, the latter of which is a seasonal springtime scallion-type veggie with a reddish hue. (Scott Scanlon/Buffalo News)

O'Connor: I try to include seasonality in the themes. One of the first classes we did was in November and we used a ton of winter squash. I try to include things that customers are going to see when they walk in and wonder, "What do I do with that?" The last class we had was the week before Cinco de Mayo, so I decided to do a Cinco de Mayo theme and tried to use some authentic Mexican recipes along with some of the products in the store to help out with that. I did a guacamole with grilled cactus in it and 10 variations of salsa, four that we sell in-store. Others were made from dried chilies that we sell in the store that people might not necessarily pick up because they don't know what to do with them. That's the whole point. It's super easy to make stuff at home with it but I think people can be intimidated.

Wilson: We had Mexican hot chocolate ice cream for dessert. That was really good.

Q: Is everything cooked in advance?

O'Connor: Kind of half and half. I'm plating things in front of people. As everyone's enjoying a particular dish, I go back and teach them how to prep certain things. Cactus guacamole, for example, I don't expect people to know how to handle a cactus leaf. There's little prickers on it, so I'm not going to let people do it themselves. I'll teach them how to trim it and slice it while they're eating it. It's kind of like dinner theater.

Q: What are your top three tips to get more produce into your diet?

O'Connor: Don't be afraid to try new things. Jack fruit looks like this big, gruesome, spiny thing but tastes almost like Juicy Fruit to me. Try one new item every week.

Wilson: Anyone on our produce team is happy to describe it and talk about how they use it.

O'Connor: We'll cut something open. I would rather have you try it here and decide whether you'd like it.

Smoothies are a huge thing to try. We make them here at the coffee bar. It's a great way to add healthy things that you might not necessarily like. A handful of fresh berries in the summertime with some kale and some coconut water with some ice, and you've got a great smoothie.

Think out of the box. Try new combinations of sweet and savory. You might think berries are a sweet item but sauté up some strawberries, cook 'em down and put them with chicken or steak.