For a sense of why Kevan Busa feels so driven to honor Dr. Philip McCarthy in this weekend's Ride for Roswell, consider a moment that occurred about three months before Busa arrived in 2012 at the Roswell Park Comprehensive Cancer Center. That was the day Busa learned, out of nowhere, that he had acute lymphoblastic leukemia.

An ambulance brought the Marcellus native to a hospital in Syracuse, and Busa figured he might as well do one thing: He asked the ambulance crew to turn on the lights and sirens, because who knew if he would ever get a chance like that again?

That kind of curiosity demands an equally curious doctor. Busa, then 23, had been a varsity soccer player at the SUNY School of Environmental Science and Forestry. Intense pain in his leg, pain on a level beyond anything he had experienced, caused him to make an appointment for a checkup.

The staff told him, if he had not come in when he did, he might have been dead within two weeks.

A few months later Busa was in Buffalo, preparing for a blood stem cell transplant that was the best chance to save his life.

In walked McCarthy, director of Roswell's blood and marrow transplant program, a guy wearing John Lennon eyeglasses and a multi-colored bow tie. He sat down and laid out exactly what was coming, in language slightly sanitized for print:

Sean Kirst: A tale of friendship that winds through the Ride for Roswell

While that advice turned out to be true, neither man could possibly have anticipated the turnabout that will occur at the Ride for Roswell Saturday. Thousands of cyclists, many of whom underwent treatment at the center, will ride from Roswell or the University at Buffalo in honor of countless lives changed by the disease.

McCarthy, who hopes to watch at least part of the race, is the guy now recovering from cancer.

Busa, with deep gratitude, leads a team that will ride 20 miles for him.

"He deserves this," Busa said. "He's a very humble person, and he doesn't want this attention, but I trust him with my life."

From their first conversation, Busa felt an intense and utter sincerity in his doctor. He had no doubt McCarthy was telling him the truth, and the truth – as hard as it might be – had an extraordinary effect. 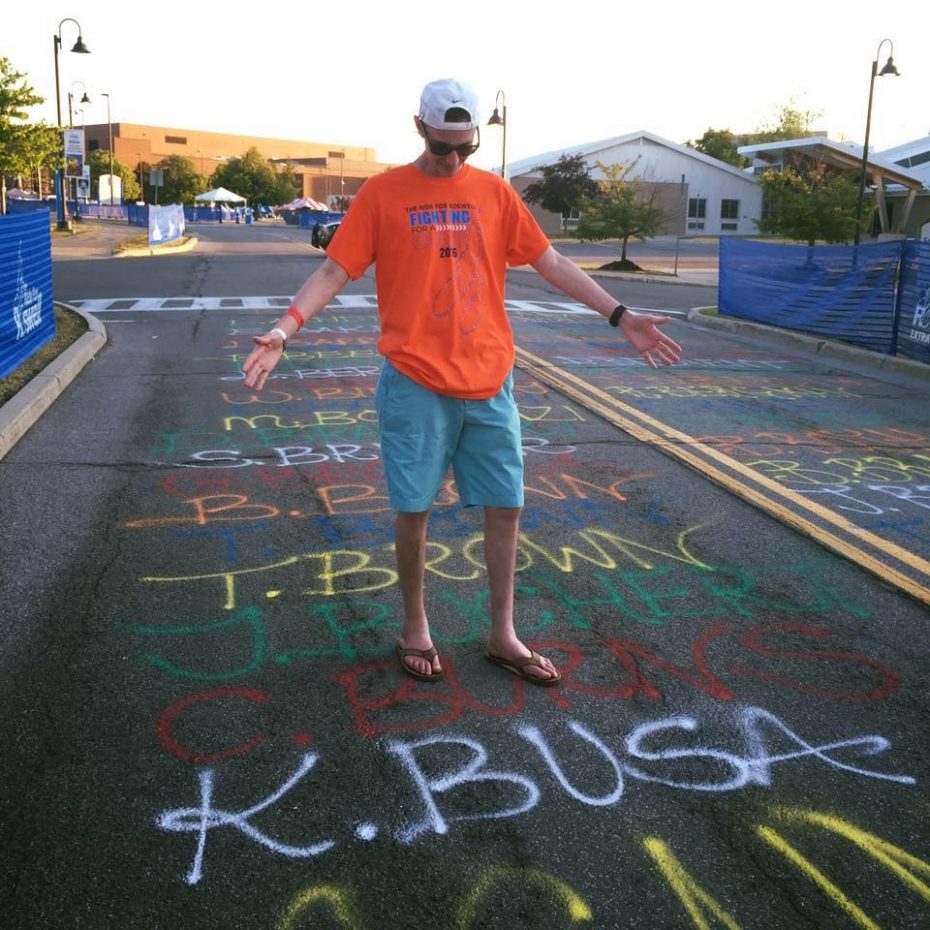 Kevan Busa a few years ago, with his name written on the road just before the Ride for Roswell. (Kevan Busa image)

It gave Busa a plan, and a plan is what he needed to get through it.

Almost six years later, everything McCarthy told him rings true. Busa weighs 130 pounds now, down from his soccer weight of 185. From time to time, he still confronts significant problems linked to the transplant.

Last autumn, for instance, a fungal infection forced doctors to put him into an induced coma. Busa woke up after five days with his hands confined in heavy gloves, breathing on a respirator, with no idea for a few moments of how he got there.

He willed himself to calm down. Within a few weeks he was back to doing what he loves to do, in keeping with McCarthy's promise. Busa works as a transportation planner in Syracuse, and he serves as an assistant coach with the Christian Brothers Academy High School girls soccer team, where his gift is a perspective every high school coach could use.

Busa knows what ought to keep you up at night, and what really does not matter.

He is also captain of "McCarthy's Mafia," a cycling team ready for the Ride for Roswell. Four years ago, Busa rode for himself and for Frank "Brud" Wilson, his grandfather, who died of cancer. Two years ago he rode for Leah Hennessey, a fellow transplant survivor.

This time, he had no doubt about his choice. Busa and his team are riding as a tribute to McCarthy, who discovered about a year ago that he had this little lump in his mouth that would not go away.

McCarthy's dentist loves to joke around, but amid his joking he told McCarthy: You need a biopsy.

The dentist was right. McCarthy, 65, had mouth cancer. The brilliant medical oncologist – who once gave a bone marrow sample during a study as a way of better understanding what his patients feel – was suddenly locked in for the ultimate lesson. 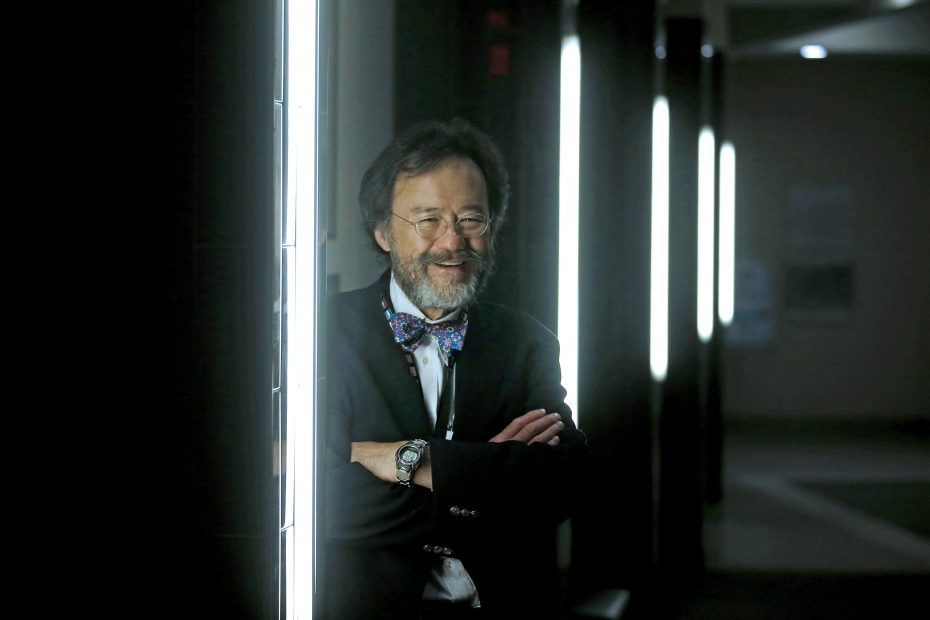 McCarthy said he was fortunate. He did not need radiation or chemotherapy. Still, surgeons left a four-inch scar on his neck after they removed tissue and lymph nodes. McCarthy was out of work for five weeks – his doctors wanted it to be even longer - and he grew a salt-and-pepper beard because it felt so strange shaving an area where the nerve was severed.

To McCarthy, Busa's journey was far more difficult. At Roswell, Busa went through chemotherapy, and then a radiation oncology team turned high-dose radiation against both his good and bad marrow. It was enough to push Busa to the brink of endurance, until he was finally ready for a transplant from a living donor.

He dealt with months of sickness and pain as his body gradually recovered. Busa ended up spending 100 days at Roswell, a time frame he did not allow to go to waste. 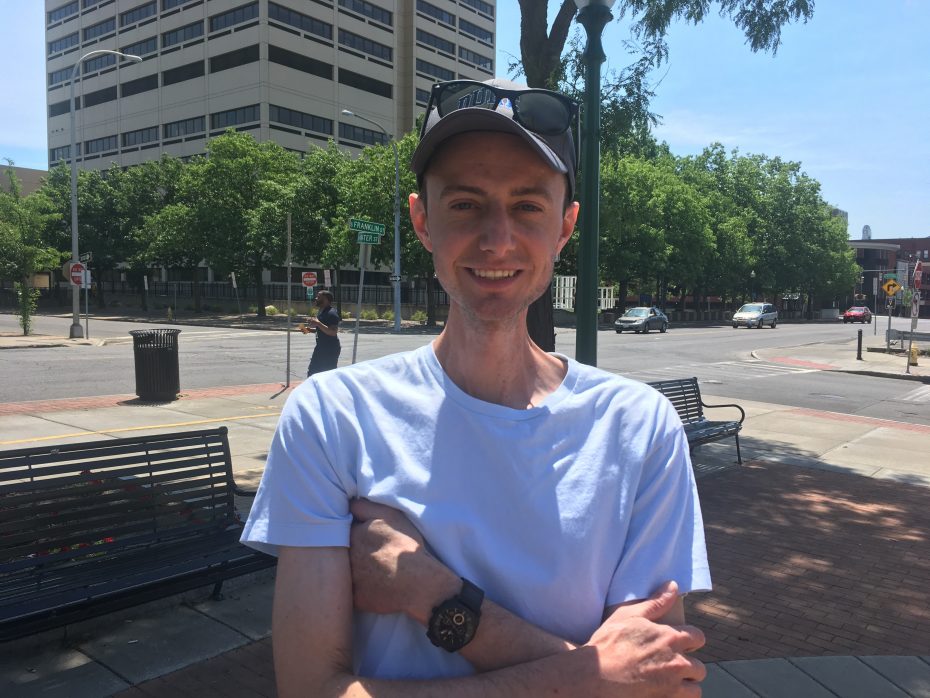 Kevan Busa has a deep love for cities and embraced Buffalo during his time here. (Sean Kirst/Buffalo News)

His passion is the fabric of cities. While he was here, he embraced Buffalo. He read about landscape architect Frederick Law Olmsted and his work on the grounds of the old psychiatric center, how Olmsted believed access to wind and rain and sky could be a soothing antidote for patients. Once Busa was capable of doing it, he took little trips with his dad to such places as the Albright Knox Art Gallery, where they once heard an excited voice, around a corner, expressing joy about a painting.

Busa laughed. It was McCarthy, on a visit with his wife and one of their daughters.

During those long weeks, Busa spent hours in wide open conversations with his doctor, who seemed to hold some insight about almost any topic. Busa happened to attend a Coldplay concert? It turns out McCarthy was there, as well. If Busa named a movie, an HBO series, a musician? McCarthy would light up, offer some thought and then ask Busa's opinion.

It reached a point where McCarthy often sent patients facing a transplant to speak with Busa, because McCarthy was confident of what Busa would tell them:

It's going to stink, really stink.

And then it will get better.

"He's an amazing doctor," Busa said of McCarthy, "and a better person."

Busa believes cancer only elevated those innate qualities in McCarthy, that a guy with the greatest bedside manner Busa ever saw now has an even better sense of empathy. Yet McCarthy, so willing to talk about just about anything else, downplays that praise.

With his own tests free of cancer, he would much rather talk about his patients. Of the disease, he said he tried to do exactly what he recommends as a doctor: He broke his treatment into mental compartments, then focused on getting through each one, rather than allowing his thoughts to wander into unknowns beyond his control.

This week, McCarthy had some back surgery unrelated to cancer. If he bounces back in the way that he expects, he intends to drive Saturday to UB. He does not think he will be able to stand and wait for the cyclists to complete the entire ride, but he will time it so he can again enjoy the best part of his job.

As he promised, he and Busa will stand together, at the finish.