In search of Italian-American cuisine worth celebrating, I have encountered miles of pallid pasta and oceans of weak tomato sauce. There have been bright spots, certainly, places with plenty of dishes to recommend. But of the 20-something red sauce purveyors whose Southern Italian dishes I've had the privilege to evaluate, none ran the table.

Then I went to Sinatra's.

The restaurant has loomed large in the Buffalo Italian landscape for decades, but recently made its move to a much bigger place, where its kitchen would have to operate at a much higher volume.

Yet from the opening Italian bread with butter and caponatina, a tangy eggplant relish, to the closing bananas Foster, every dish I tried was pitch-perfect. Sinatra's isn't named after the most famous crooner to ever emerge from Hoboken. But its smooth swagger, backed up by killer talent, will have you tapping your toes in no time.

Over 37 years, on the other side of Kenmore Avenue, Sinatra's grew from a tavern with wings into one of Buffalo's favorite Italian restaurants under the direction of founder John Sinatra Sr. He died in 2017, but still greets each customer, via portrait beside the host's stand. The new place, which opened in March, is brighter and less clubby, with a four-season patio to extend its charms outdoors. 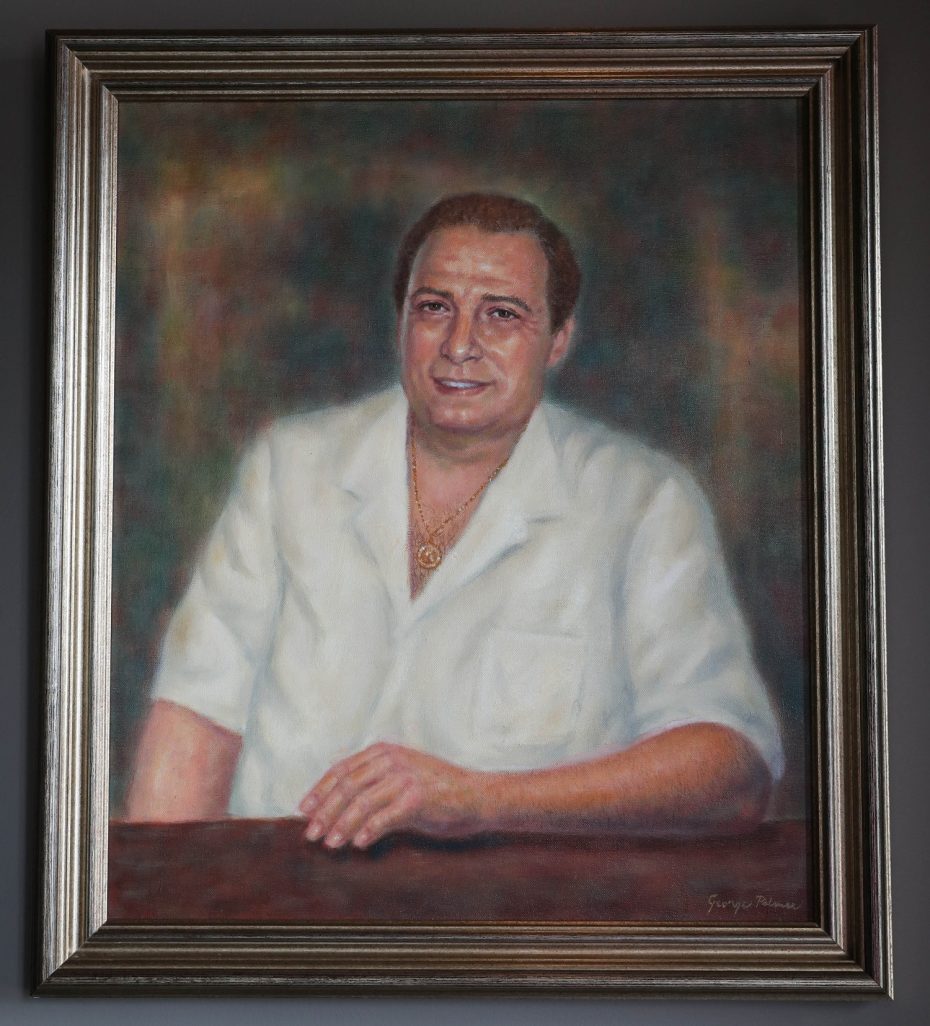 A portrait of the late John Sinatra Sr. hangs at the entrance. He opened the restaurant in 1981 with the help of his wife, Camille. (Sharon Cantillon/Buffalo News)

There are still Jim Beam train cars above the new bar. More importantly, chef-owner Michael Sinatra, who took over from his father in 1992, kept key staff while training new members. In a town with a shortage of solid restaurant veterans, Sinatra's success is a reminder that restaurants are made of people.

Our server was a fount of wine knowledge, which came in useful when choosing a bottle at my price point from an expanded list long on Italian vintages. He delivered specials verbally, which always leaves me wishing for a card, but patiently repeated all the details at request.

Any competent cook can impress you with steak and lobster. At Sinatra's, even beans and grilled zucchini left me wishing more restaurants paid attention to the humble basics as well as the center of the plate.

Fava beans ($10.95) were a bowl of firm-tender beans swimming in garlic oil. A spoonful of grated cheese from the dish on the table, and their satisfying simplicity had me mashing some with my fork so I could soak up more of that garlic oil.

Zucchini is a frequent-flyer on my grill. But I'm reluctant to order it in restaurants, where it's either put on the grate just long enough to get marks, arriving warm but raw, or cooked to mush. These squash slices were gently browned to firm tenderness, and served with a dab of good balsamic.

When the artichokes francese ($13.95) arrived, I recalled why Sinatra's version has ruined me for lesser models. Artichoke hearts, clad in puffy egg batter sautéed to golden, were dressed in a light sauce of white wine, lemon and butter, with capers. The balance between lemon, egg and romano cheese made a gilded frame for these vegetable hearts. 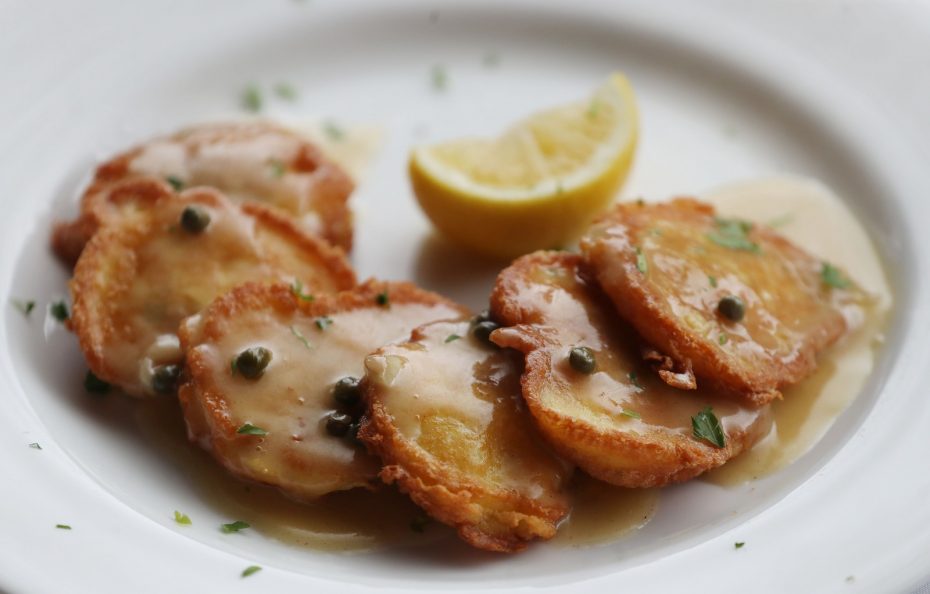 Clams casino (6/$12) are freshly shucked clams that cozy up to shredded lobster, shrimp and crab under buttery crumbs and a bacon bite. A grilled seafood appetizer ($25) brought half a lobster tail, a massive shrimp and segment of king crab leg with clarified butter, tender seafood seasoned subtly with a wisp of smoke from the grill.

Instead of a letdown, house salad is an engaging mélange of romaine lettuce, tomato, cucumber, chickpeas, roasted peppers, radish, celery, fresh mushroom and a slice of hardboiled egg, under house vinaigrette and crumbled blue cheese.

Entrees maintained the momentum. Pan-seared halibut on a stew of escarole and Tuscan white beans ($35) featured a steaklike cut of fish that was bronzed crusty but velvety tender inside. Spooned up with tomatoes and greens cooked down in seafood broth, it brought the seaside to Tonawanda. 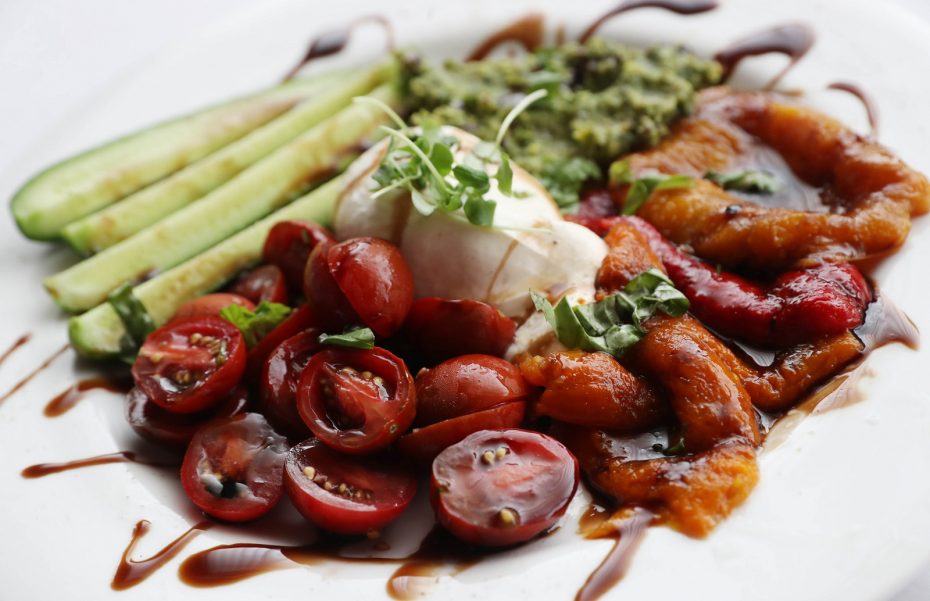 Bolognese ($22) on pappardelle was a mound of al dente pasta ribbons carrying just enough sauce to coat, with none pooled in the bowl. Ground veal was simmered with a touch of tomato until it surrendered its beefy essence, creating an intensely savory glaze.

House-made gnocchi puttanesca ($21.95) punctuated a jumble of chunky, fruity San Marzano tomatoes with lively bursts of brine from capers, plus olives in black and green, with enough anchovy to deepen its umami without saying "fish." The potato dumplings were light enough to float, unlike so many sinkers.

Average beef bracioles turn out stringy, but Sinatra's ($28.95) uses pork shoulder, for a silkier texture. It's filled with a sausagelike mixture and hard-boiled egg, braised in tomato sauce and served with its bathwater. That sauce, rich and deep with enough sweetness to tame the acid, is enough by itself on spaghetti. Finally, I understood why some Italians call it gravy. 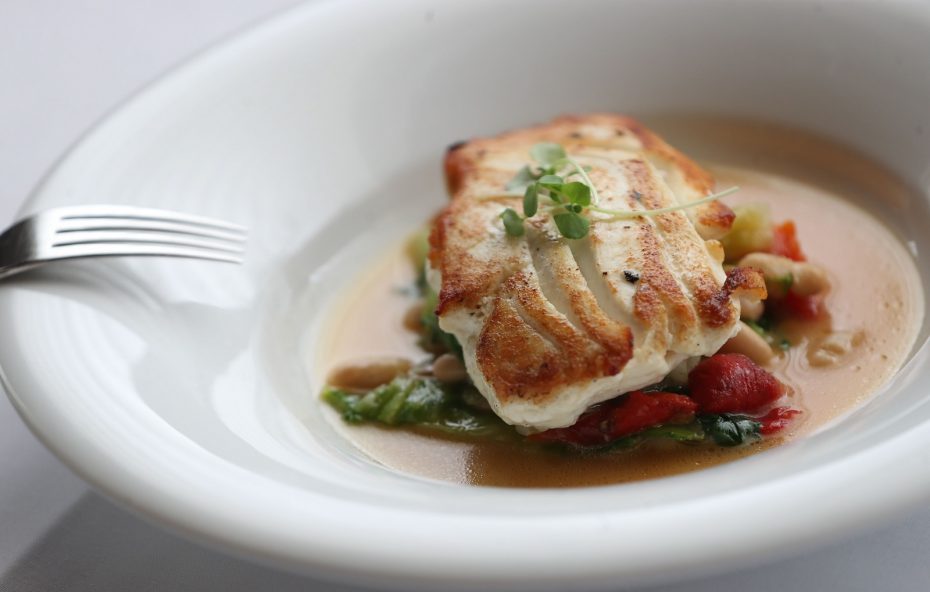 A special, this is Sinatra's halibut seared over a Tuscan white bean and escarole stew. (Sharon Cantillon/Buffalo News)

Desserts ($8) included paragons of cassata cake, tinted with rum, and airy tiramisu, sweet mascarpone around ladyfingers in espresso and Kahlua.

Bananas foster ($12) ladled around a scoop of melting vanilla ice cream, got its caramel banana flavor from caramelizing bananas and brown sugar, not dousing it with artificially flavored banana liqueur, which is cheating. 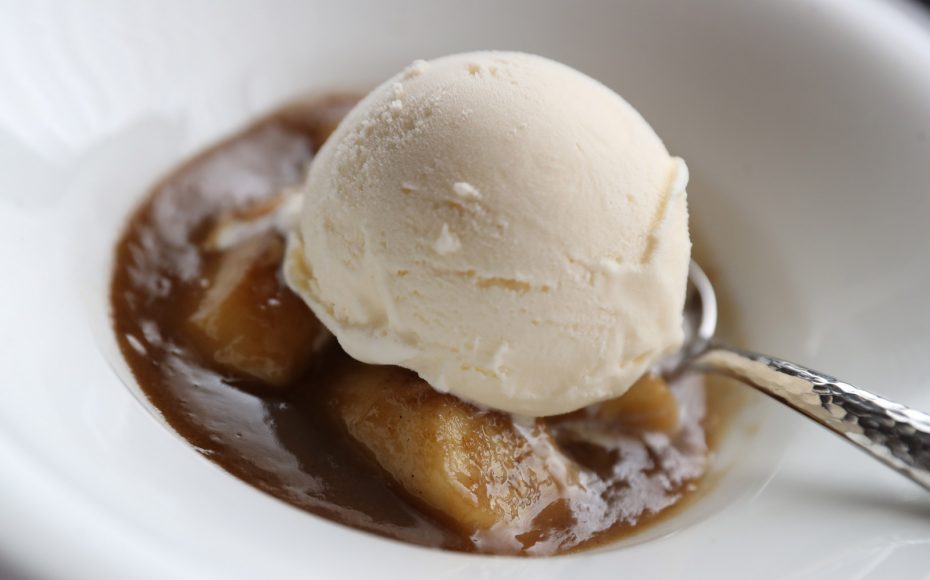 Sinatra's bananas Foster is made with rum and brown sugar and topped with vanilla bean ice cream. (Sharon Cantillon/Buffalo News)

My demerits are minor. Our table wasn't crumbed between courses, due to an oversight. When full, the room's hubbub at times stymied polite conversation. Overall, though, with winning cuisine, stylish surroundings, and deft service, by the end of the night it was clear that dinner at Sinatra's is nothing short of peak Buffalo.

If you like your Italian food with tomato sauce, you owe yourself a trip to Sinatra's. See for yourself why it's king of the hill, top of the heap. 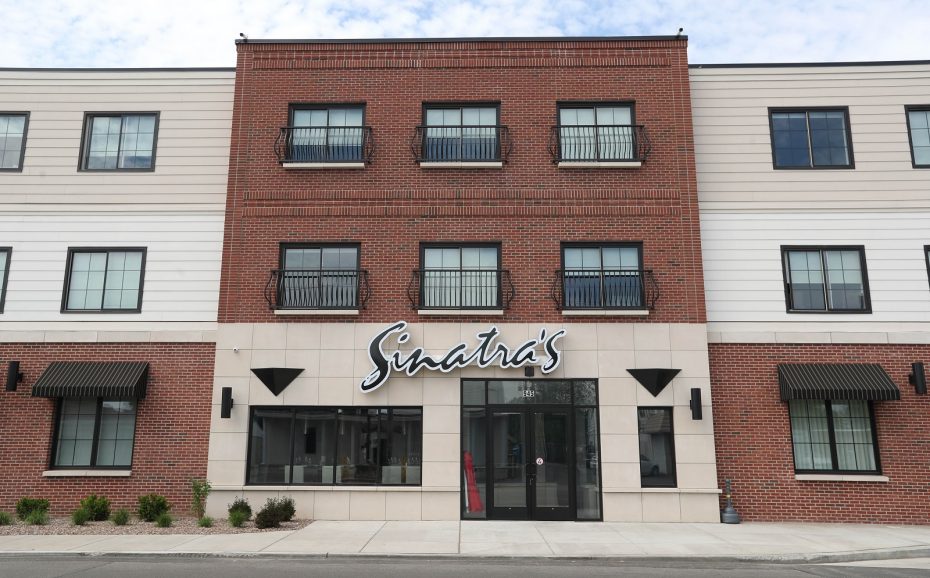 Sinatra's opened its new location at 945 Kenmore Ave. in Kenmore across the street from its old place on March 22. (Sharon Cantillon/Buffalo News)