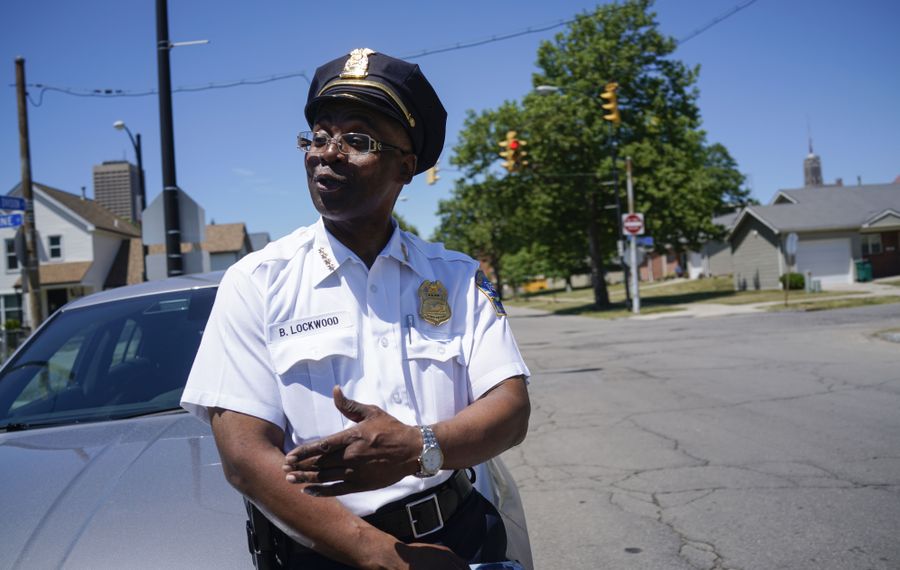 In the summer of 1967, Byron Lockwood was a child living in the old Ellicott Mall housing projects east of downtown when a police car, sirens blaring, pulled up to the curb.

Four African-American police officers jumped out of the car, he said.

“They were like diesel. Big and stuff. I looked up and said: ‘Wow, I want to be just like that,’ ” Lockwood recounted.

But Lockwood, now the Buffalo police commissioner, sometimes saw another side of the police, like the time officers took over the PA system at Ellicott Mall. “They used to make sounds of monkeys. Like ape sounds,” Lockwood said.

He still dreamed of being a cop. But not that kind. “I just wanted to help people. I thought: I want to be one of the good guys,” he said.

With a new initiative being announced Wednesday, he hopes to use his position to take community policing to a new level and show residents that the police are the good guys.

Called the Neighborhood Engagement Team, it’s a 100-day pilot project that began last week. Comprising about a dozen officers, all of whom volunteered, the team will be sent to neighborhoods where there’s a lot of crime, especially crimes involving drugs.

“These neighborhoods that we are targeting,” said Lockwood, stopping himself. “I don’t want to use the word ‘targeting.’ Neighborhoods we’re ‘going’ into,” he corrected himself. “They are hard-pressed neighborhoods. We know there are a lot of drugs there but also good people living there. Some of these people are like being held hostage in their own neighborhoods or their own homes.”

The officers will go door-to-door to introduce themselves to neighbors, work with or help set up neighborhood watch groups and coordinate efforts with members of the community groups Buffalo Peacemakers and SNUG.

“This is well beyond enforcement. It’s significant engagement with the community,” Mayor Byron W. Brown said of the initiative.

The officers’ duties include:

Lockwood, who was officially appointed to his post in March after serving two months in an interim capacity, wants his officers to be the kind of police people across the city can trust and respect.

“Let’s not go in there as soldiers,” Lockwood said. “Let’s go in there as officers who are going to reach out and see where we can help in the community. I’m not saying we can fix all of the problems, but … as far as public safety, we can help them with that – making sure their neighborhoods are safe.”

In February, Lockwood, 59, announced that he wanted all of the more than 700 uniformed police officers in the department to be “community police officers,” not just the 11 who were specifically designated as such.

He also disbanded the Strike Force Unit, which worked with state troopers and Erie County Sheriff’s investigators in areas police identified as crime hot spots, often conducting traffic checkpoints in those areas, a practice that has led to an investigation by the state Attorney General’s Office.

The new Neighborhood Engagement Team is a different kind of approach to policing. Its members are encouraged to work with residents to organize events, like cookouts and day trips with neighborhood kids. Victory Sports, a sporting goods company, is donating equipment that police can bring into neighborhoods.

In tandem with the police efforts, the city will conduct “Clean Sweeps” in the neighborhoods, clearing trash, cutting grass, fixing street signs and filling potholes.

The initiatives will include a “law enforcement component” involving other police units, Lockwood said. Arrests will be involved, he said, but he didn’t want to give out too many operational details ahead of time.

Members of the team also will be expected to take action if they see dangerous activity.

“Don’t get me wrong: They are still police officers,” Lockwood said. “They’re going to do their jobs. But their main goal is to interact with the neighborhood, with residents there.”

Brown said Lockwood is the right person to be leading the effort.

“I think it’s critically important for young people on the East Side, the young people throughout the City of Buffalo, to see a commissioner who grew up in challenging circumstances who understands the community, who comes from parts of the community that haven’t always felt like they’ve gotten a fair shake from the police department, to be leading the Buffalo Police Department and helping to lead efforts to make it a true partner with the community.”

The unit already works closely with groups such as Buffalo Peacemakers and SNUG at large community events, including last weekend’s Juneteenth Festival. 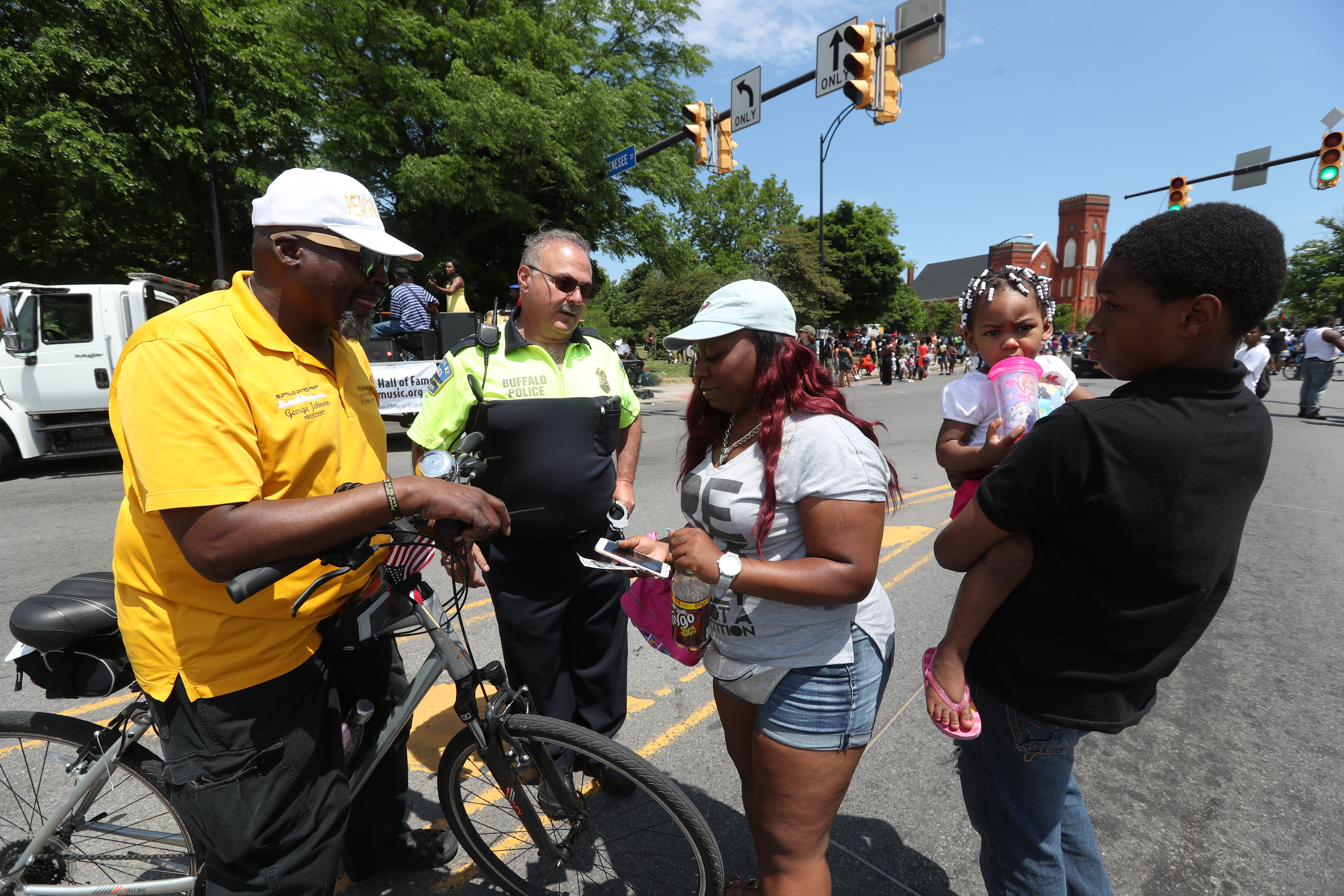 On a sunny, steamy Saturday, hundreds were at the park, lined up at booths and food trucks and seated in groups under any shade they could find.

Twelve years ago, the festival was marred by violence. Capt. Steve Nichols, who now heads the department’s community policing unit, walked through the crowds at this year’s celebration and recalled what happened in 2006.

He was a lieutenant then and was on patrol at the festival when he heard gunfire. He saw a teenager firing an assault rifle into a crowd, Nichols said. He chased after him as he ran down Sweeney Street.

“I lost him,” Nichols recalled. He saw a car speeding by at the end of the street but it seemed too far away. Then a man on a porch gestured toward a nearby backyard. Nichols said he quietly walked into the yard and saw the teen bent over and breathless, the gun still smoking at his feet.

“I charged him and knocked him to the ground,” Nichols said. He did not fire his gun. The young man was arrested.

In the years following, the Buffalo police started working with local anti-violence organizations to help them keep the peace at the popular festival.

The anti-violence activists are familiar with the young people in their communities, including the ones who might cause trouble. They help identify them and keep them from congregating in large groups.

The police maintain a large presence, but the officers hang back. “We’re not here to arrest them,” he said. “But we let them know we’re here.”

On Saturday, dozens of teenagers circled the park, excitedly talking and checking each other out.

“The kids know us,” said Tim Newkirk of the violence prevention group SNUG. “All the kids, the gang-affiliated ones, they see us, we neutralize the situation.”

It’s that sort of approach that Lockwood hopes NET will bring to neighborhoods dealing with crime.

Rev. James Giles, supervisor of the Buffalo Peacemakers, is hopeful for the new program.

“I think it’s going to do a lot to enhance relationships between the community and law enforcement but most of all, galvanize the community to work together to reducing crime, especially violence.”

Police watchdog groups, who have criticized the Buffalo Police Department’s use of Strike Force and checkpoints, have advocated for more community policing. In 2016, the Partnership for the Public Good published a report calling for Buffalo police officers to receive more training in community policing and to emphasize problem solving and relationship building.

He also raised concerns about police responding to crime hot spots. “That’s ‘broken windows’ policing,” he said, referring to policing tactics that target all levels of crime and violations in an area. Critics say it leads to unfair treatment of people in poor communities of color.

“Vehicles will only be used when it’s necessary,” he said. “You park the vehicle. You get out and knock on doors and talk to the neighbors.”

“The cookout is to bring the neighborhood together, so we can interact with them and let them know we’re here,” he said.

With more police interacting regularly in the neighborhood, the hope is that opportunities for crime will diminish.

The officers won’t be judged on how many arrests they make or tickets they give out, he said.

“I can judge how well they’re doing when I go where they work and hear the response from the community,” Lockwood said.