More than 2,000 miles from the Mexican border where immigration authorities are facing international outrage for separating parents trying to enter to the U.S. from their children, a Congolese woman in Buffalo is waiting to be reunited with her 4-year-old daughter.

The woman is currently at Vive, a shelter for asylum-seekers on Wyoming Avenue run by Jericho Road Community Health Center. Her other child is with her. Both were detained at the South Texas Family Residential Center, an immigration detention center in Dilley, Texas, before a donor provided travel to Vive.

According to Mariah Walker, legal services manager at Vive, the woman learned just last week after months of searching that her husband and 4-year-old daughter, who crossed the Mexican border separately, had also been detained – and then separated. Her husband was taken to a detention center in Texas. The little girl was sent to a shelter for immigrant minors in Chicago.

“She’s extremely traumatized,” said Walker, who did not give the woman’s name because of the sensitive legal situation she is in. “She’s very worried about her family. She spoke to her husband for the first time last week after months of not knowing where he was. We have been trying to track him down for a while. Our lawyer was able to find him.”

While there have been no reports of families being separated at the Canadian border, the Congolese woman’s case shows that the Trump administration’s policy of separating parents from their children at the Mexican border to deter illegal border crossing is having an impact across the country, said Walker and Anna Ireland Mongo, the chief program officer of Vive.

The New York Times on Wednesday reported that at least 106 children have been sent to shelters in New York. Gov. Andrew M. Cuomo's office confirmed the number with six of the nine shelters that contract with the federal government to take unaccompanied minors. Cuomo on Tuesday said that New York State would sue to overturn the Trump administration’s immigration policy.

But on Wednesday, Trump announced he would sign an executive order ending the policy but immigrant advocates don’t expect the move will have an immediate impact on parents and children who already are being detained.

Since the beginning of Trump’s presidency, Vive’s clients have felt the impact. Early last year, the shelter was overwhelmed with people hoping to be granted asylum in Canada. During its three decades, Vive has provided shelter and advocacy to people from around the world seeking shelter in both the United States and Canada. By March 2017, the shelter had run out of space and local families and churches were allowing asylum-seekers to stay with them until Canadian immigration authorities could hear their cases. 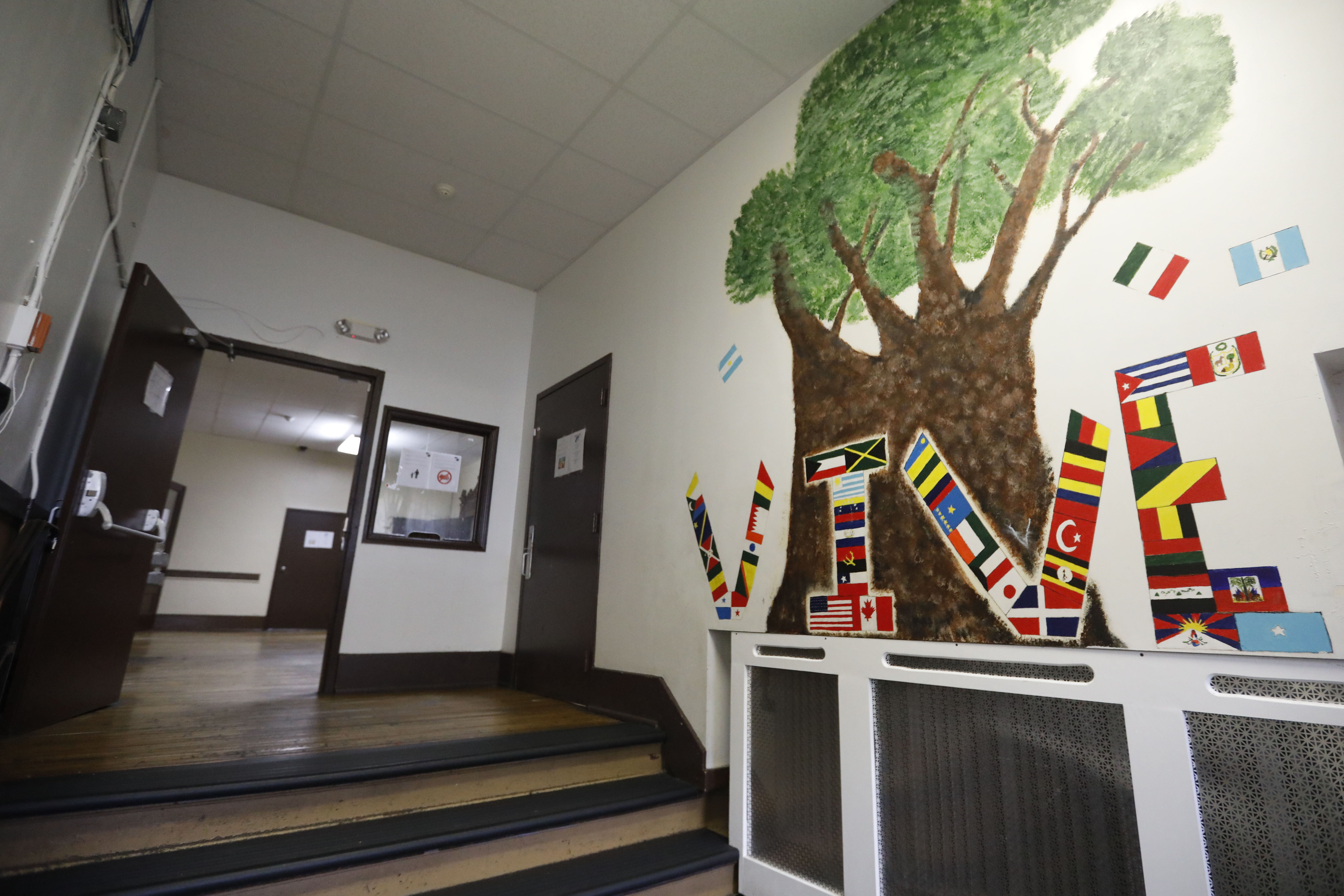 A mural at the entrance to the Vive shelter, Wednesday, June 20, 2018. (Derek Gee/Buffalo News)

This year, the number of asylum-seekers has slowed, Mongo said.

Right now, they have more than 80 residents at the shelter. Most are long-term residents who are hoping the United States will grant them asylum. About 500,000 asylum are cases pending in the U.S., Mongo said.

It’s a lengthy process that can take three years. But the shift in recent immigration policies has seemed to speed up the process, Walker noted. Some people are having their cases heard as early as three months after applying.

The change in pace has been tricky for immigrant advocates who had previously began the asylum process before gathering all the necessary documentation, believing the case wouldn’t be heard for years. Now, they must get all their documentation together first before trying – or risk their clients being rejected.

Asylum-seekers often lose their documents while fleeing. “People who are on this journey are so vulnerable,” Mongo said. “They get robbed and get all their ID taken. It’s just bound to happen. Even if they started out with money, they are certainly not going to have it in the end.”

The Vive staff are working with the Congolese woman to reconnect with her family. They are in contact with the shelter where her daughter is being kept. In the meantime they are working with Office of Refugee Resettlement, part of the U.S. Department of Homeland Security, to confirm that the girl is really the mom’s daughter.

In the meantime, the mother will stay at Vive. She’ll be offered English classes and given some chores, just like other residents at Vive.

“And we’ll just keep working on her case,” Walker said.