“The silent Chinese of Buffalo are good and happy folk,” read the headline describing “Buffalo’s Chinese colony” in the Courier-Express in 1940. “Not one of them has been on police record in 20 years.”

There were 96 Chinese in Buffalo in 1900. That number had grown to 110 by 1930. In the intervening years, a small Chinatown sprouted up along Michigan Avenue around William and Broadway, but most of Buffalo’s Chinese population was located close to the many laundry businesses and chop suey restaurants located in all parts of the city.

By 1940, only two Chinese stores were left in the area that is today better known as the African American Heritage Corridor. Those two stores were located on the same block as the historic Michigan Street Baptist Church at 511 Michigan Ave.

Suey Gee Chang was located at 507 Michigan Ave. It was a retail outlet that catered to Buffalo’s Chinese population.

Between the church and Suey Gee Chang was the home of two organizations, the Chinese Benevolent Protective Association and the Chinese Merchants Association. Here, the Chinese gathered to exchange news from back home, iron out differences among themselves, collect money for relief of the poor in China and, especially for the older Chinese, play mahjong.

A partial list of laundries in Buffalo in 1920, with many Chinese names among them. (Buffalo Stories archives)

It was mostly the oldest members of the group who also maintained a Buddhist shrine at 509 Michigan Ave. Twice a month they’d drink tea and practice incense burning rituals.

George Wong was a leader of the Buffalo Chinese community and owned a laundry at 718 Elmwood. He said that even though most of the area’s Chinese were no longer practicing the religion, that Buddhism “indirectly still maintain(ed) a hold over his people.”

"The Chinese always try to imagine how an act would feel if done on themselves," Wong said. "If they feel they wouldn't like it, then they think it wrong to do it to someone else. Above all they hate stealing."

A generation earlier, the organization of Chinese businessmen was much more robust and was located at 475 Michigan Ave., near the corner of William Street. Unless they used a Chinese-operated laundry service, the only time most of Buffalo heard from the city’s Chinese population was when both newspapers wrote about colorful and exotic Chinese New Year celebrations every year or when the businessmen would collect money for the starving people of China. The impoverished conditions in many parts of China were the result of a long war with Japan. It’s also the origin of the bromide about “starving kids in China.”

Buffalonians were always particularly generous to the efforts to collect for poor of China, especially when, for example, Mayor J.N. Adam gave his office as a collection point and encouraged the people of the city to give.

Fook-Lip Liu was a graduate of Burgard High School and a mechanic at Curtiss Aeroplane. "We are very happy because the living conditions here are so much better than in China," Fook-Lip explained to Courier-Express reporter Lucian C. Warren in that 1940 article. "Americans are very nice to us and Buffalonians in particular have been nice to the Chinese."

Buffalo’s early Chinese population mostly came to Buffalo from southern China; among them was Wallace Lee. He came to Buffalo in 1918 and worked as a chef. In the Town of Tonawanda, he and his wife raised six children, among whom there were at least two doctors, a pharmacist, an engineer and a school teacher.

The Chinese men said they were treated well in Buffalo, but that wasn’t always the case for Chinese here, particularly at the height of an opium epidemic in the mid-1890s.

“Slippery Jim” Lee was a trafficker of opium into Buffalo across the Canadian border. Under cover of darkness, he and his cohorts climbed into rowboats in Canada to take the drugs from across the Niagara River. Once on this side of the river, the drugs were taken to the Michigan Avenue Chinatown for distribution.

In 1897, a Buffalo Courier reporter followed a U.S. Marshals detective to 234 Michigan Ave. and wrote an ugly, racist accounting of what unfolded there.

With a series of shrieks similar to those that might be uttered by wild animals, Jim Lee’s two henchmen leaped to their feet, and rushed upon (the detective). The latter threw back his coat displaying his badge, at the same time announcing that he was an officer and wanted Jim Lee.

He proceeded to look through the place, paying no attention to the ravings of the Chinks.

Finally, one of them, an unusually dark skinned fellow, with fierce, villainous looking black eyes, grabbed up an-iron weight with a string attached, and swinging it around his head, threatening to knock the officer's head off if he did not get out. 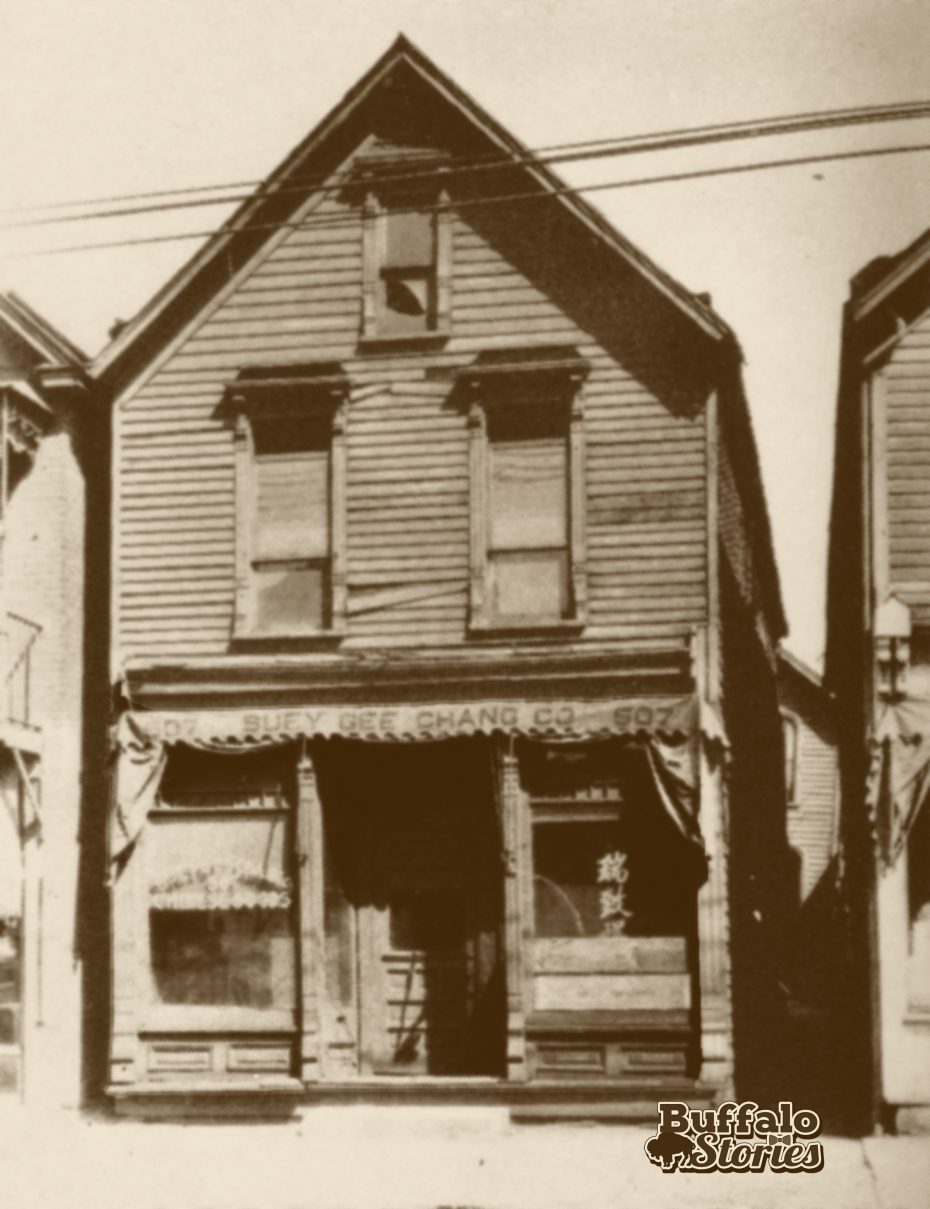 Once the opium trade died down, so did the hostility between Buffalo and the Chinese.

The writer of a glowing 1905 review of the Chinese New Year was apparently awestruck by the $300 worth of fireworks set alight in front of the Michigan Avenue shop of Hop Chong Wah.

The Chinese in attendance considered it Buffalo’s first professional fireworks display. The review read: "To the average spectator the Chinese seemed to have mastered the art of handling fireworks, and the display was well worth seeing. Even the street car motormen stopped their cars for a few moments while the din was at its height in order to allow the passengers to take in the scene."

An account of the preparations for the 1912 New Year celebration gives an idea of what it must have been like:

Sam Lee, one of the best known Chinese in Buffalo, said last night that his countrymen were making elaborate preparations for the event this year, which will be doubly important, owing to the creation of a new republic in China, with Dr. Sun at its head.

"Our people in Buffalo will feast for days, and maybe weeks," said Lee.

At a Chinese restaurant in Michigan street a banquet is planned at which most of the Chinese and their "Melican friends" will be present.

Here there will be bird nest soup, shark fins, which somebody a year ago dubbed "fish with whiskers," geese gizzards, lobster, young duck and a dozen other strange dishes of the Orient.

The place will be elaborately decorated for the occasion with Chinese lanterns, a joss altar and vari-colored lights. There will be quaint Chinese pottery and chopsticks, "Gum boi," the favorite Chinese red wine, will be very much in evidence.

All good Chinamen are now paying their debts. New Year's cards are now being sent around from one Chinese to another. Laundries, restaurants and tea houses are being cleaned up and put in readiness for days and even weeks of eating, drinking and visiting. It means idleness for the Chinese. That's the way they celebrate their New Year's. 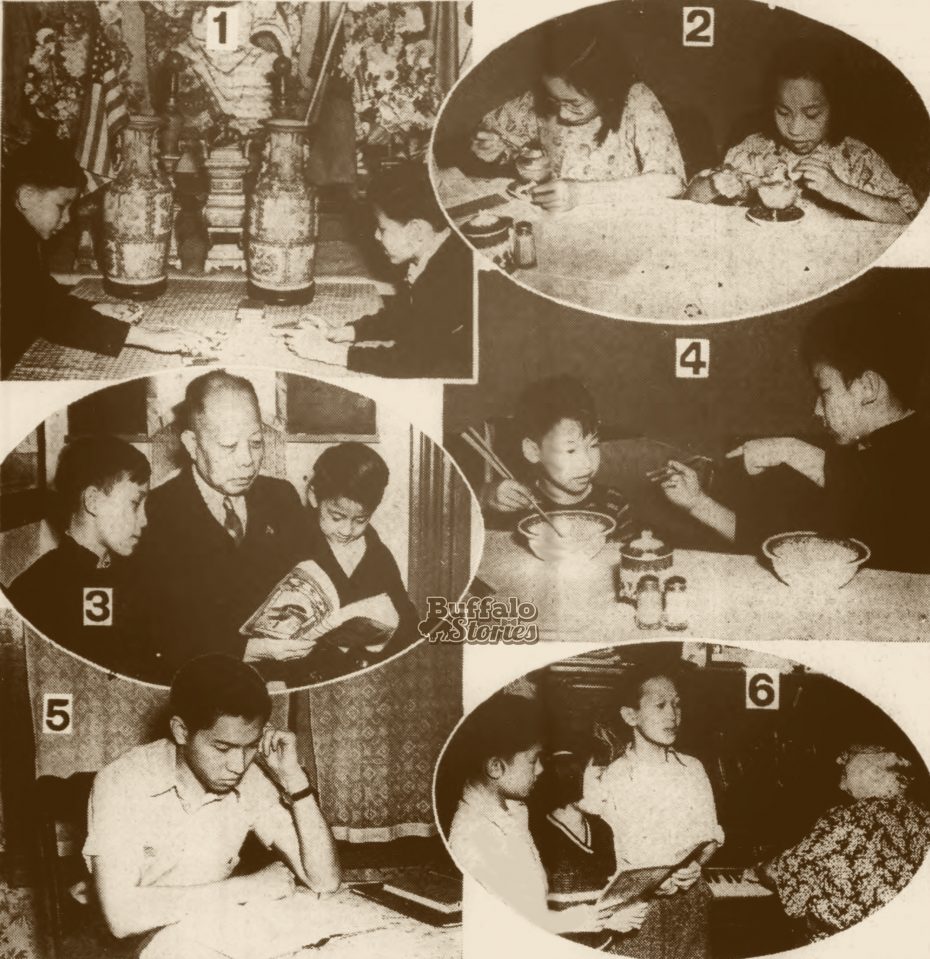 The caption to this photo collage from 1940 read: "The last names of Chinese children in Buffalo are as Oriental as chop sticks, but their given names are as American as baseball. The names and these pictures generally show that the SO Chinese children are highly Americanized, although they still retain some elements of their native culture. In picture No. 1 James and Johnny Jew, ten and twelve, respectively, are playing dominoes with the trappings of the Buddhist shrine at 509 Michigan Avenue as a background; 2—Clothed In native costume, Rose Marie Yee, twelve, and her sister, Elsie, eight, are being treated to ice cream; 3—Yee Ying Wo, president of the Chinese Benevolent Protective Association, reads a Chinese story to Fred and Luther Yee, ten and seven, respectively, while 4—Frank Yee, eleven (right) teaches his five-year-old brother, Howard, how to manipulate chop sticks; 5—at his school lessons is Frank Wong, a student at Seneca Vocational High School; 6—Fred Wong, eleven (left) Jean Wong, eight, and Buddy Wu, sing Christian hymns with Mrs. Fred Fairbanks, director of the Chinese Junior Benevolent Association, at the piano."