Jamie Leszczynski was talking through a Bluetooth speaker as she drove, the highway landscape flowing past her car at a velocity that seemed fitting to the way our culture moves these days.

At that moment, it was less than a week since Anthony Bourdain – chef, author and television star – took his own life, his death occurring only days after famed designer Kate Spade made the same choice. For what seemed like an instant, suicide was the focal point of national attention, but then President Donald Trump went to Singapore to meet with North Korea's Kim Jong Un, and the news cycle churned on like it inevitably does, and soon the searing focus on suicide was beginning to slip into yesterday's news.

Except for people like Leszczynski, for whom it is always waiting in the morning.

She was a big fan of Bourdain's, a guy she saw as an inspiring and thoughtful entertainer, and the shock about his death – the idea that almost no one saw it coming – only reinforces the things she fears the most. So Leszczynski had a thought to share as she drove the other day, a lesson she wishes she never had to learn in a nation where the suicide rate has climbed 30 percent in half the states since 1999.

Maybe no one, she said, will ever fully know why Bourdain and Spade chose to take their lives, but their deaths underline the reality that traditional visions of wealth and material success do not always equate to peace or well-being.

Instead, suicide is built upon a mysteriously singular and often hidden blend of despair, emotional struggle and illness, on a crushing and unbearable corrosion of self-worth; according to the Centers for Disease Control and Prevention, about 54 percent of suicide victims had no known prior mental health condition.

Leszczynski does not try to guess at the individual genesis of forces of such tragedy and power, and she has only one piece of wisdom she can recommend as a means of prevention, one commitment she hopes might stay with all of us.

In a society where people are often overworked or distracted, where simple courtesy has too often lost its meaning, where the digital world is filled with harsh and taunting voices, where kindness is routinely written off as weakness ….

Listen, and respond with understanding.

Because you never know which call or conversation could be a turning point. 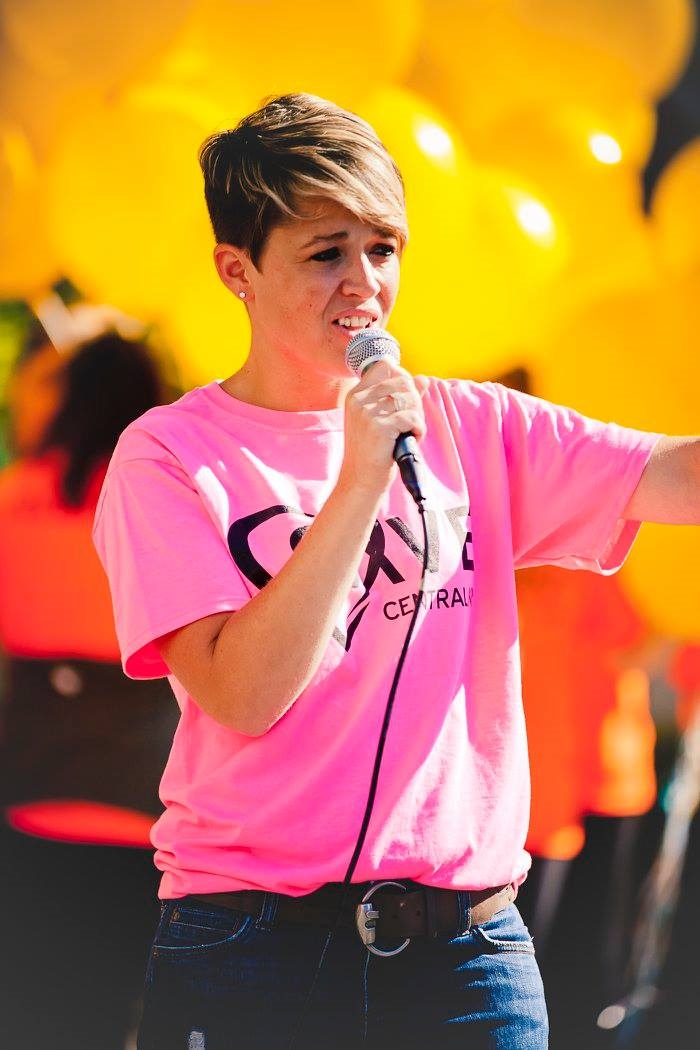 Jamie Leszczynski remembers her brother, Ryan Stack, at a SAVE walk at SUNY Oswego. (Family photo)

She looks around and sees a nation where the opioid crisis is at an epidemic stage, where unhappiness and isolation are too often the dominant results of a digital world that supposedly brings people closer together, where too many lives seem caught in orbit around a gaping void.

"I know we're not all counselors, we're not all therapists," Leszczynski said. Still, she said it is critically important to remember how events or encounters that might seem like no big deal can be a breaking point for someone doubled over by depression.

She makes that point because she is a witness.

Leszczynski was raised in Medina. Her brother, Ryan Stack, took his own life there in 2002, when he was 16. At the time, Leszczynski was a 20-year-old student at SUNY Oswego. She knew her brother was growing more rebellious at home. She remembers being exasperated with him, in a typically big sister way, in their last few conversations.

Ryan, she said, was outgoing, an extrovert, a guy who loved music. He was the last person she would have believed was suicidal. But as he accelerated from childhood into his teenage years – a time of high emotion and often turbulence for adolescent boys – he began to display a few changes in behavior that Leszczynski at the time saw as predictable restlessness.

A couple of weeks before Ryan died, he called his sister at Oswego. He asked if he could move there and live with her. Based on what he told her, she thought it was standard teenage drama. She advised him to tough it out, promising that college would lift him out of high school soon enough, that everyone goes through what he was going through.

A week later, on her birthday, he failed to call her. They had always been close. That had never happened before. Leszczynski called her brother, upset. She questioned his attitude. She wondered why he seemed so self-absorbed. She believed, by challenging him, she could bring him fully back to his old self.

Even now, at 35, she carries the weight from the kind of conversation that would usually be quickly forgotten. She offers the tale, painful in the telling, in an attempt to spare someone else from what came next.

A few days later, on a quiet summer afternoon, Ryan went into the attic of his home and hung himself. Jamie does not believe he wanted to succeed. She thinks, based on the timing and circumstance, that he thought someone would interrupt that act.

For Leszczynski, it took a few years to find a path through utter grief. She remembered that bleak time as she watched the coverage of Bourdain and Spade, the stories celebrating their achievements and their lives. Taking it all in, she experienced one fear: Some people who are suicidal might see all the eulogies, the spotlight of bereaved attention and be drawn toward it.

"What you don't see is the way the people who loved them will be sitting at a kitchen table, crying and wondering why, many years from now," Leszczynski said.

As for healing, it came through the gradual awareness of a purpose. Leszczynski dedicated herself to the idea that the best way of honoring Ryan is to talk about his life and any signals that he sent. She asks people to take nothing for granted, to listen intently when someone seems to be suffering, to be conscious of the friend whose mood seem subtly or unexpectedly different.

She believes her brother, if he had weathered that crisis, would be alive and happy.

What she is left with is the lesson, and this chance to pass it on. Leszczynski, now married and the mother of three young children, became active in a national group called Suicide Awareness Voices of Education. She founded an Oswego chapter that sponsors a suicide awareness walk every September. Last autumn, 1,000 people from around the state gathered to take part.

A few years ago, Leszczynski said, a woman arrived in the company of a 14-year-old daughter who had been talking about suicide. This time, Leszczynski knew what to do. She grabbed the girl and hugged her, and they both started to cry, and Leszczynski said:

I wish I could still do this for my brother.

For the last two years, joined by her mother, the girl came back and walked.

In Western New York, those seeking help with thoughts of suicide can call a 24-hour hotline at Crisis Services, at 716-834-3131. Sean Kirst is a columnist with The Buffalo News. Email him at skirst@buffnews.com or read more of his work in this archive.