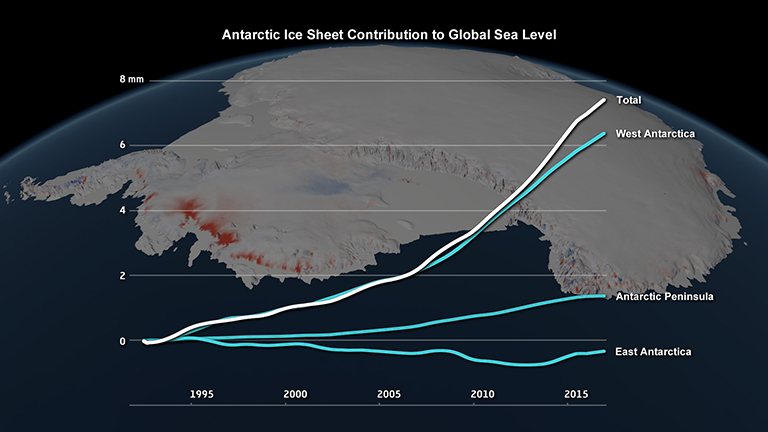 The ice on the western side of the Antarctic continent is melting much faster than just a few years ago. That’s especially significant because this ice melt speeds up sea-level rise. (When sea ice thaws, that doesn’t contribute to the rise, but when land ice melts in these quantities, it spells trouble.) The NASA-supplied image at right tells part of the story.

In the most robust study of Antarctic ice to date, funded by NASA and the European Space Agency, the Nature paper shows the rate of ice melt from west Antarctica has tripled since 2012, increasing global sea levels by 0.12 inch. The study shows this ice melt has caused sea-level rise to occur faster than any time in the last 25 years.

The work was performed by 80 scientists from 42 international organizations and included 24 satellite surveys of Antarctic ice, far surpassing the detail of previous studies. Between 1992 and 2017, the total sea level rise has been 0.3 inch from this Antarctic contribution. But in the last five years there has been this disturbing tripling of the melt rate compared to 1992–2012.

The land ice melt has increased dramatically mainly due to warmer ocean waters flowing beneath the ice shelf at the sea’s edge. The loss of this marginal sea ice then allows inland glaciers to accelerate toward the sea, greatly increasing the annual melt rate from the mean land mass. Antarctica’s ice mass is 7.5 times greater than the mass of all other land ice in the world, including the enormous Greenland ice cap.

Don Paul
The weather is looking good for the coming holiday weekend
Hot weather may help with Covid-19
Much of May has been disappointing, but genuine warmup is coming
Warmer air expected to follow mid-May rainfall
More Stories

Of course, no one and no glacial or climate models are predicting the majority of Antarctic ice will disappear. But just to give you some perspective on ice mass, if all of Antarctica’s ice were to melt, it would raise global sea levels by 58 meters, or 190 feet.

In other ice melt news at the other end of the world — which is NOT contributing to sea level rise — sea ice in the Bering Sea has been at a record low. According to NOAA and the International Arctic Research Center, sea ice was essentially gone in the Bering Sea by the end of April, when there is still typically 500,000 square kilometers of ice in place. Three consecutively amazingly warm Arctic winters have brought Arctic sea ice in general to record low levels. But as for the Bering Sea, historical surveys going back 150 years indicate this minimum measured on April 29 was unprecedented in that time span.

If you’d like to keep tabs on the state of the world’s ice and other major environmental issues, here is a terrific link from NASA’s Jet Propulsion Laboratory. Personally, I think it’s worth bookmarking: https://eyes.jpl.nasa.gov/eyes-on-the-earth.html.