Five summer editions of 107.7 Alternative Buffalo’s Kerfuffle are now in the books. And after its latest affair on June 16, the station can check off another rollicking amalgamation of Fender rock, electro pop and all points between along Buffalo’s Canalside waterfront.

Here were some of the highlights:

When the Kerfuffle lineup was announced, some were confused as to why Atlanta’s Manchester Orchestra wasn’t a headliner. Its muscular, albeit emotive performance at Canalside did nothing to weaken this wonder. Led by Andy Hall – and flanked by guitarist Robert Hall and bassist Andy Prince – the quintet’s exhibition was a chord-driven storm, with explosive favorites like “I’ve Got Friends” and “Cope” responsible for highlighting a set hard to top.

End with a NATION

As for the actual festival headliner, Aaron Bruno's AWOLNATION didn’t disappoint. Those who endured the day’s wait until its evening-ending set were treated to older tracks (“Kill Your Heroes”), sublime new material (the sublime “Handyman”) or a variety of wailers that rode the lightning and metal-level chops of lead guitarist Zach Irons.

Balloons. Confetti. On-stage histrionics. Mash it all together and you have live music’s answer to the T-shirt cannon, Matt & Kim. Over its hourlong set of giddy dance pop, the Brooklyn duo unleashed its expected glee on tracks like “Get It” and “Hey Now,” all while spreading its positive vibes to Prime Street. 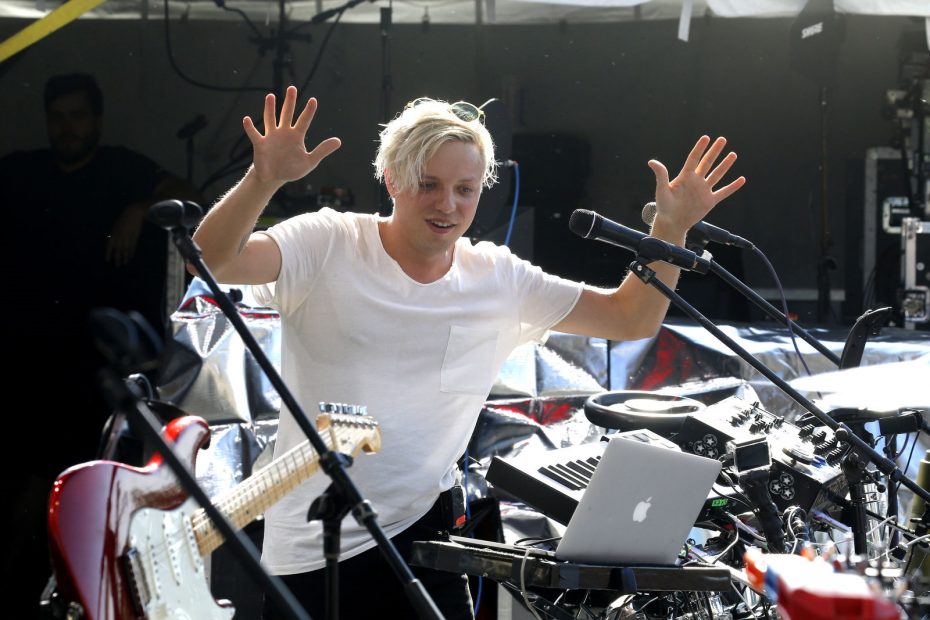 Disaster is when a tech-dependent artist’s technology malfunctions at the start of a show. Terrifying, but when this happened to vocalist and multi-instrumentalist Robert DeLong – causing a 15-minute delay – he recovered. Once he regrouped, he jumped behind his drum kit for an incendiary version of “Global Concepts,” then proceeded to tear through a thumping (albeit shortened) set of inventive work.

For fans wondering whether the day’s lineup was determined by amplified potency, those suspicions were likely obliterated after the day’s opener, Mainland. Fronted by the jovial bounce of Jordan Topf – clad in a throwback Buffalo Bills T-shirt – the quartet rocked early arrivals with the pristine power pop of “Permission Slip” before showing its stylistic dexterity on dramatic radio favorite, “I Found God."

Gallery of the Kerfuffle bands and fans

A smiles gallery of fans at Kerfuffle