The numbers stand 8 feet tall along the Outer Harbor, 10 hulking pieces of rusting COR-TEN steel arranged in a semicircle like some 21st-century Stonehenge.

In the mind of Robert Indiana, the artist who created the piece, numbers are sacred personal symbols. Each has a personal meaning for him -- "1" corresponds to birth, "0" to oblivion -- but stands as a universal figure upon which we can all project our own meanings and memories.

This is the radically simple power of Indiana, the Pop artist famous for his iconic "LOVE" paintings and sculptures that attract selfie-seekers to public spaces and adorn gift-shop tchotchkes the world over.

Indiana's lesser-known work, including his monumental public sculpture "NUMBERS ONE through ZERO" on the Outer Harbor, is the subject of a career-long retrospective that opened today in the Albright-Knox Art Gallery.

"Robert Indiana: A Sculpture Retrospective," Albright-Knox Deputy Director Joe Lin-Hill's attempt to pull the artist's pioneering sculptural work from the shadow of his most popular creation, has been in the works for several years. It has taken on new importance in the wake of Indiana's death in late-May at the age of 89.

"Zero," Lin-Hill said of that number's morbid meaning, "has achieved a new prominence." 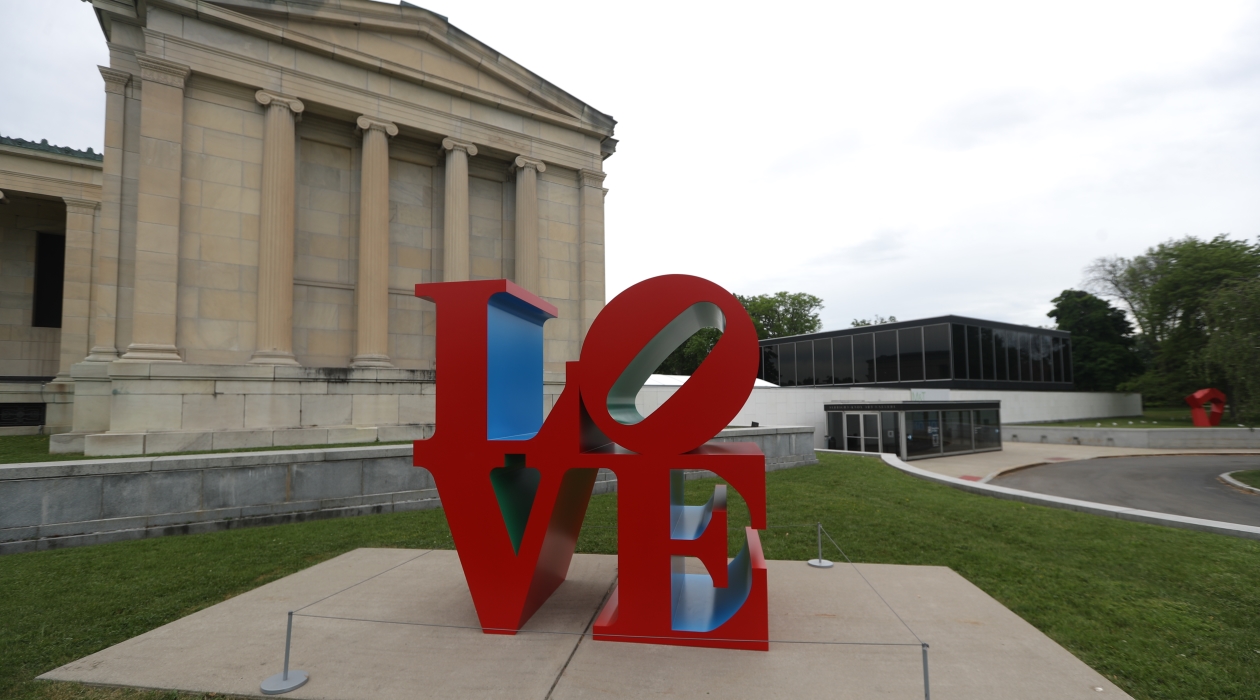 The impetus for the show, which follows the Whitney Museum's well-received 2013 exhibition "Beyond LOVE," came from the Albright-Knox's own collection.

In 1963 -- three years before Indiana created his first "LOVE" sculpture -- the gallery acquired an early sculpture called "Star." It was a time when Indiana was a hot name in the art world shortly after a buzzworthy show at the Stable Gallery in 1962, and his work was being sought after both by the Albright-Knox and the Museum of Modern Art. (His first major exhibition in New York City was at the Martha Jackson Gallery.)

"Our own Star was here sort of calling out for attention, so I wanted to delve into: What happened to this body of sculpture?" Lin-Hill said. "I think that sculpture is really fundamental to Indiana's work because it's so graphic in its compositional aesthetic and complexity."

"LOVE," for all its overexposure, is about as pure and clean as an artist concept can be: It means what it is and it is what it means. It is universally understood and full of infinite meanings for individuals. It is both screen and projection; medium and message. 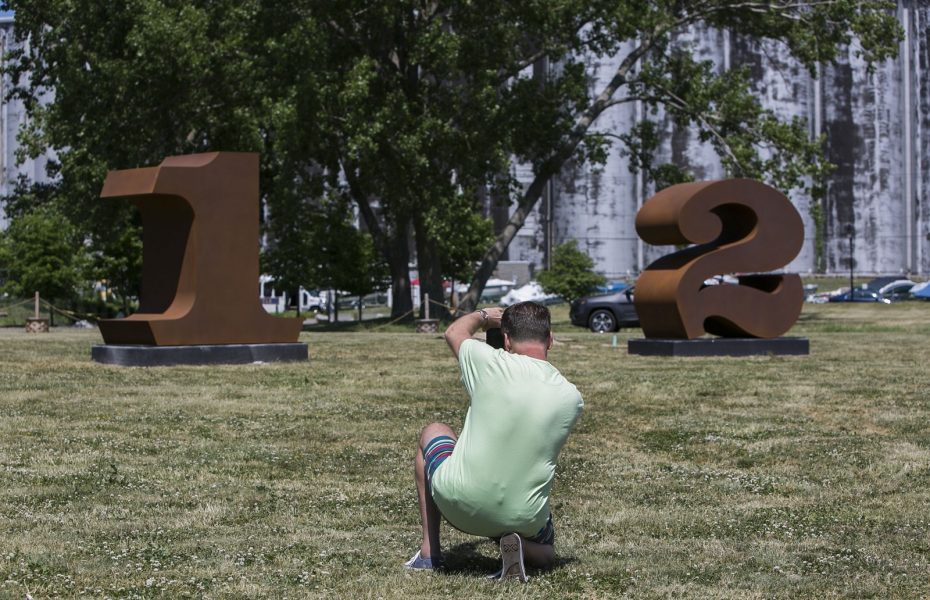 Brett Neubig, who comes from Los Angeles, flies to Buffalo in order to see these sculptures and takes photos. (Shuran Huang/Buffalo News)

Which has to account for some of its popularity.

"No one had ever conceived of a word as a sculpture. The whole concept of 'LOVE' was just so fresh," Lin-Hill said. "It's a self-contained entity that is very much like the numbers: They stand on their own, and they signify nothing or everything, but they mean something personal to everyone."

Even so, Indiana's most famous work only accounts for a small part of his wide-ranging practice, which included a deeply meaningful iconography of symbols, words, numbers and double-entendres.

"In the popular imagination of course, 'LOVE' is always going to be the most popular image," Lin-Hill said. "But there's a whole story of Indiana's work that's very engaging, almost like a treasure hunt, where different things signify in different ways at different times and he continues to build on their resonance, even if they're very simple symbols."

From Indiana to Buffalo with LOVE

For example, the show includes many of Indiana's so-called "autoportraits," in which he employs the symbol of a star and various numbers to represent himself. Very early in his career, he chose two pairs of simple, three-letter words ("eat/die" and "hug, err"), twin leitmotifs of deep personal meaning to Indiana that he repeats and expands upon throughout his work. 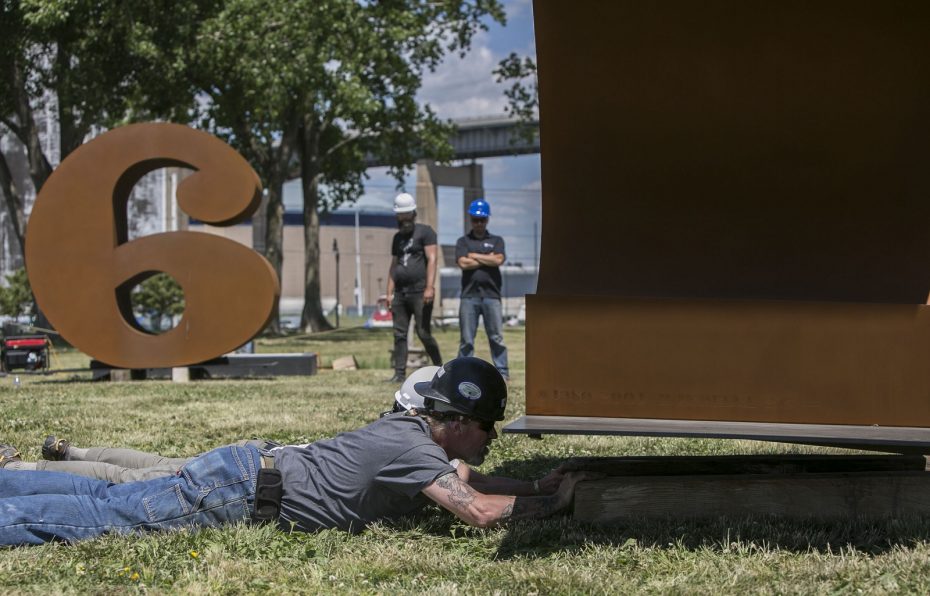 "He's thinking about the same thing for like four decades," Lin-Hill said, going on to wonder why the art world's curiosity about Indiana seemed to trail off after the explosion of "LOVE" and its many authorized and unauthorized descendants.

"Why do we focus on just that moment when the initial work is conceived?" he asked. "What about, 'What does this really mean for this artist who has essentially been a recluse since the late '70s?"

The Albright-Knox's exhibition, which will travel to the Tampa Museum of Art in October, will attempt to answer that question.

"NUMBERS ONE through ZERO" is on view through the fall at Wilkeson Pointe on the Outer Harbor, 225 Furhmann Blvd.