Jessica Lowell Mason was sipping a drink next to her younger brother Will when she captured their life in a single soundbite.

“I have been the rainbow sheep of my family since I came out as a teenager,” Jessica said so casually, so matter-of-factly, that it barely hinted at the storm that followed her coming out as gay. Or, better put, getting caught as gay, because she didn’t really intend to come out when she did.

Will nodded. He remembered what happened half a lifetime ago when Jessica, then 16, was talking on the phone about liking someone at school. Their mother, Susan Pazzaglia overheard the conversation and realized that her daughter’s crush wasn’t a guy.

When she discovered that her daughter was gay, Pazzaglia spiraled into a rage, one that nearly ripped their family apart. Pazzaglia told Jessica, “You know you’re not just going to make your own life hell. You’re going to make your sister pay and your brothers pay. They’re going to be bullied at school because of you and this sick choice you’re making.”

But years later, the wound is healed, and the Masons aren’t hiding the scars. Jessica Mason, now 33 with two young daughters, is fully reintegrated into the family. Pazzaglia embraces her daughter’s homosexuality, wearing rainbow logo shirts and marching in Pride parades, and she wants to talk to parents of gay children to help them avoid her mistakes.

“Times were different back then,” Will said to Jessica. “Mom was different. I think it was based in fear.”

“We’ve come so far in the last 15 years,” said Will, who has a self-appointed mission: Late last year, he published a children’s picture book, “The Boy with the Rainbow Heart,” which is being used in schools in Buffalo, Rochester, Syracuse and Cleveland.

He wants to help as many children as possible understand, and celebrate, their differences. He wants as many families as possible to not endure what his did.

An illustration by artist Coraline Tran from "The Boy With the Rainbow Heart."

Jessica Mason knew she was gay a few months before her mother found out. At their East Amherst home, she had confided only in her sister, Melissa, who is a year younger. Mason was close with her mother, too; Pazzaglia would sit on the edge of her Jessica’s bed in evenings to hear about her day, get updated on her friends, talk through her problems.

Mason circled the situation one time with her mother, and it didn’t go well. Her mother's sister is openly gay, and Mason remarked that it was cool that Aunt Judy was different.

“It’s never OK,” Pazzaglia told her daughter. “Just so you know, in our family, it will never be acceptable. To be gay is NOT acceptable.”

Whoa, Mason thought to herself. If I come out, THAT is going to happen.

If bringing up Aunt Judy was testing the waters, her mom’s reaction served as a tsunami warning. Clearly, this was not a topic Mason would be able to broach in one of those bedside chats. So she didn’t.

After Pazzaglia overheard the conversation about her daughter's crush, she tried to convince Mason that she was confused, not gay.

She ordered Mason to keep her sexuality hushed from her brothers, Will and Joe, who are three and six years younger. As a mother, she worried they would be bullied, or possibly turn gay themselves. She threw holy water into her daughter’s bedroom, trying to rid the place of evil spirits.

Jessica Mason warned her mom, “I will have you not in my life if you’re going to continue to try to change me.” Those words were her way of taking back power. So is what she did next.

When she turned 18, she moved out.

Change isn’t neat or clean or easy, and Pazzaglia cannot pinpoint precisely when, why or how she got better. But she did.

When Jessica moved, Pazzaglia realized she was losing her daughter. Deep introspection and counsel  helped her reconcile her own history: Her sister was gay, of course, and her parents tried to hide that from the folks at their country club. Pazzaglia had accepted Judy’s homosexuality, but when it came to her own daughter’s, “I think I took it like it was happening to ME,” Sue said. “Not her.”

Not long before Jessica came out, Pazzaglia’s father had died. Her siblings were separating, and she was having issues in her own marriage. (Pazzaglia and Bill Mason are now divorced, but the family remains close.) She was grappling with depression; she remembers it all as a “horrible, horrible time.”

“I needed therapy,” Pazzaglia said. “I needed help to deal with it. I would say the worst things to my daughter” — she burst into sobs — “that I will regret forever.”

But a mother’s love won out.

Jessica ultimately moved to Illinois, got married, had two daughters. During that time, Pazzaglia’s desire to keep her family reshaped her thinking. Horror and confusion evolved into acceptance and celebration. Jessica Mason knew the dynamic had changed when, on a family visit to Chicago, the Masons spontaneously decided to walk in the Gay Pride parade.

“Now it’s become part of our life,” Jessica said. “In a way, we’re all gay. Now, me being a lesbian is an OK part of that family.”

Today, Pazzaglia hopes to speak to parents and families who are coming to terms with having a child who is gay. “My goal is to get to parents before you risk ruining your life with your family,” she said.

Will Mason, meanwhile, has adopted a similar goal: He is determined to help the next generation of kids like his sister realize that it’s OK to be different. In fact, you should celebrate it. 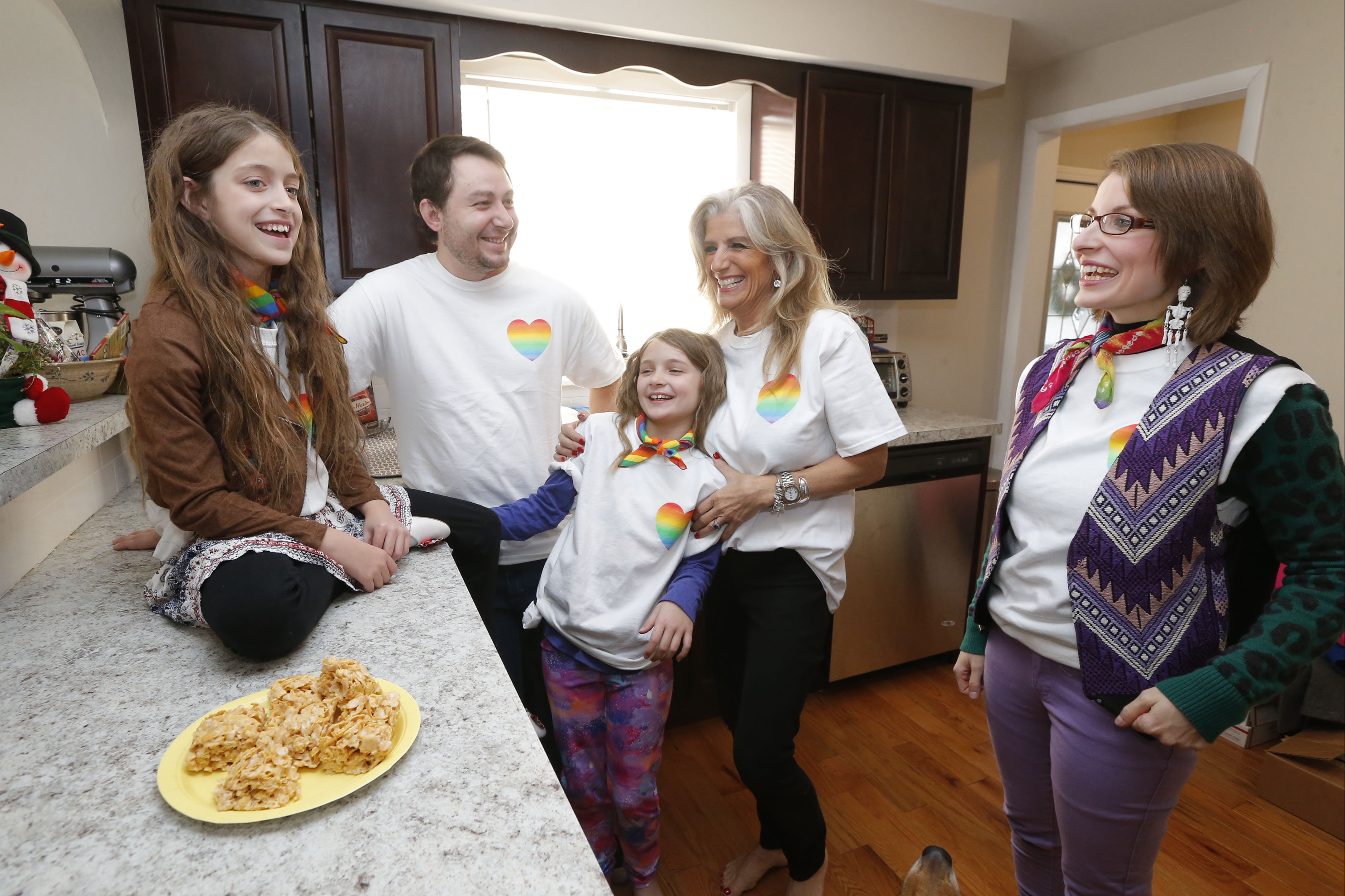 Several years ago, Susan Pazzaglia, center, realized she needed to improve her relationship with her gay daughter Jessica, right, when Jessica moved out after turning 18. (Robert Kirkham/Buffalo News)

A few days after Christmas, Jessica Mason was visiting family with her daughters Darah McFadden, 10, and Elanah McFadden, 8, who live in Illinois with their other mom. (Jessica lives in Buffalo, where she is a rights associate for Prometheus Books and an incoming doctoral student at the University at Buffalo.) They were sitting at the kitchen table inside the Cheektowaga home of Will Mason and his wife, Kate. Dara, who was in fourth grade, was talking about the confusion that often comes with having gay parents.

Elanah added, “Last year there was this boy in my class and he was like, ‘That can’t happen. That’s bad.’

Darah chimed in: “There was this one kid who still does, who’s on our bus. He’ll come up and say, ‘You’re weird, your moms are gross.’ He’ll say, ‘Your moms are stupid and you’re stupid.’ And then my friend who has a gay mom too will come over and be like, ‘Do you want a knuckle sandwich? Stop bothering them.’”

Darah’s “knuckle sandwich” reference prompted a laugh from her mother, uncle and grandmother, who were gathered around the kitchen table. But the chuckles were rooted in cuteness, not humor. The Masons find little that's funny in that type of narrowly rigid judgment.

Will Mason, who is a development officer at Canisius College, started working in early 2017 on a book designed to teach openness. He wrote the text for “The Boy with the Rainbow Heart,” hired an illustrator, and self-published it late last year with support from the Pride Center of Western New York.

The book tells the story of a boy who lived in the town of Gray, where the people “lived in fear” and were “scared of any heart colored different than theirs.” But the happy and merry boy “wore his colors on his sleeves,” and spread those colors to make “the town glow.” By the end of the book, people of all genders and skin colors are holding hands and smiling.

“The townspeople changed too,” Mason writes, “and so did their hearts.”

In the months leading up to the book’s late-2017 release, Mason devoted his evenings to emailing nearly 7,000 teachers and building up a Facebook page to promote the project. At first, he assumed the idea would be widely and warmly accepted.

On the whole, people took it that way. His Facebook page gained 3,000 followers in the first week. But he also received a handful of messages and comments – maybe two dozen or so – trying to scare him off: ‘I got one that said, ‘We need to bring Hitler back. He killed the wrong people.’ And, ‘Why are you trying to brainwash kids?’” he said. “Really crazy…

“It fuels my freaking fire to make this work and get this into schools.”

So far, Mason has donated more than 500 books to schools through sponsorship from the Pride Center. He has sold hundreds more (the book retails for $14.95) and and is almost out of his initial print run of 2,000 books. This fall, Mason plans to release a second Rainbow Heart series book, “Big Angry Red,” which focuses on bullying for LGBTQ youth.

As he was writing the original story, Mason purposely shaped the narrative without overtly saying the main character is gay. The only LGBTQ reference is the rainbow symbol, which makes it flexible for educators. If teachers want to use the book to specifically address sexual orientation, they can. But they can also use it to broadly address diversity and openness.

“It’s about love,” said Colleen Sadowski, director of the school library system and media services for the Rochester City School District. “It’s not about hate, and disliking someone because they’re different. You really don’t know why this child is different in this book, other than he has a rainbow heart, and loves everybody.”

When Laura Gabel, a school psychologist in Cleveland, received her copy of the book, she brought it home for her fourth-grade son, Hunter, and had him read it aloud.

“What do you take from the story?” Gabel asked her son.

“Everyone should be kind to everyone else,” Hunter told his mom.

“And wow,” Gabel said, recalling the moment, “isn’t that what we want folks to do in the world?”