If the building in St. Paul, Minn., that a raccoon famously scaled this week looked familiar, there's a reason.

What's now called the UBS Plaza was designed by Skidmore, Owings and Merrill, the same architectural firm responsible for what is today known as One Seneca Tower in Buffalo. The 25-story UBS Plaza was originally known as the Conwed Tower and was completed in 1980. Buffalo's tallest building, at 38 stories, was originally called Marine Midland Center and was completed in 1972.

We haven't had a raccoon climb the One Seneca Tower and create a national sensation. But here are some memorable stories of wildlife gone wild in the Buffalo area in recent years:

Scajaquada Jack: A 4-foot-long American alligator made a splash in June 2001, when he was discovered in Scajaquada Creek. He eluded capture for four days before animal-control officers hauled him out. Jack was shipped off to an alligator farm in Florida.

Parkside peacock: A peacock from the Buffalo Zoo evidently wanted to spread his wings in 2006. He left the zoo and wandered through the Parkside neighborhood. After a few days roaming free, keepers captured the colorful bird and brought him home. 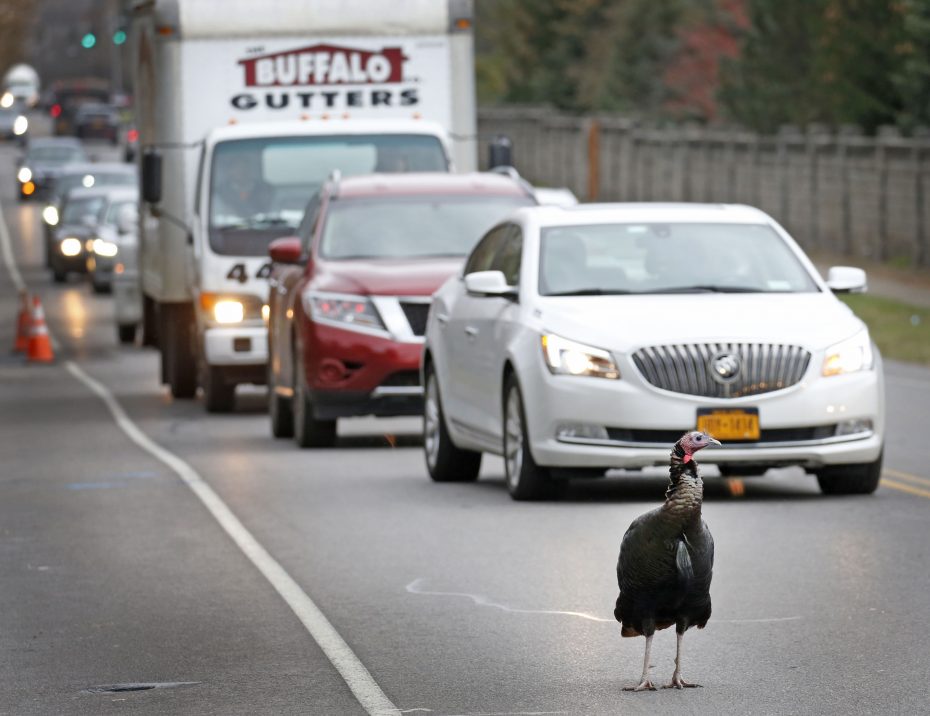 Tom the Turkey, before he was relocated away from his longtime stomping grounds. (Robert Kirkham/News file photo)

Tom the Turkey: The Eastern wild turkey ruled the intersection of Klein and Paradise roads in East Amherst, where he would often block lanes of traffic, peck at tires and circle cars. His reign came to an end last fall, when he was captured and sent to the Nora's Ark rescue and wildlife rehabilitation center in East Concord.

A hunting heron: In 2008, an Amherst homeowner wondered why so many fish were vanishing from her pond. One morning, she saw the explanation: a great blue heron was feasting on them.

Deer friend: It's not unusual to spot deer and geese inside Forest Lawn. What was unusual in spring 2011 was that at deer appeared to be guarding a Canada goose and her eggs, in a nest inside a granite urn. The uncommon bond even spawned a webcam feed from the cemetery.

Falcon fight: In 2011, a red-tailed hawk made a nearly fatal mistake: It flew by the nest of the peregrine falcon nesting on the Statler. A frightening battle followed. The falcons drove the hawk into the middle of Delaware Avenue. Fortunately, humans came to the injured hawk's aid, and the bird lived to fly another day.

A bear up there: Black bear sightings aren't a rare thing, but they are in the Village of Williamsville. In 2011, a migrating black bear was reported near South Cayuga Road. Amherst police followed it into the village, where the yearling climbed a tree. Officers gave it some space, the bear climbed down, and it disappeared into the darkness.