On the same weekend he hopes will mark a big change for the fortunes of a franchise he's worked for since Day One of its existence, longtime Buffalo Sabres equipment manager Rip Simonick will be honored for all the years he's already put in with the Blue and Gold.

The winner is added to the PHATS/SPHEM Wall of Honour, located in the Hall outside the replica Montreal Canadiens' dressing room that is one of the signature elements of the Toronto museum.

Simonick also will be recognized during the annual Hockey Hall of Fame weekend in November. This year's inductees will be announced June 26 and former Sabre Alexander Mogilny is one of the biggest returning candidates.

Simonick, 69, learned of his selection during the playoffs and will officially be named Saturday night during the group's Hall of Fame reception and dinner in Orlando – a day after the Sabres make Rasmus Dahlin the No. 1 overall pick at the NHL Draft in Dallas.

"I'm pretty excited about it. It's a huge honor," Simonick said. "I have 30 guests coming and it's a convention that gets around 2,500 people every year. And there will be guys we used to have playing for us now in the Tampa area like Dave Andreychuk and Daren Puppa who are coming, too."

The Sabres and the Sabres Alumni are sponsors of the event, which will be hosted by broadcaster Rick Jeanneret. Former players Rob Ray and Pat LaFontaine will also be on hand to present Simonick.

Simonick, whose career started in 1964 as a stickboy for the AHL's Bisons, was hired for the Sabres by original General Manager Punch Imlach in 1970 and has worked for the team during its entire existence. A 2014 inductee of the Greater Buffalo Sports Hall of Fame, he is considered one of the franchise's great father figures to both current and former players, and is regularly greeted by alumni who live nearby at many of the Sabres' road stops.

His celebration will be limited because duty calls. Simonick returns to Buffalo the next day to prepare for the team's annual development camp in HarborCenter, which will be the first time Buffalo fans see Dahlin on the ice.

"I'm looking forward to meeting him and we hope he is absolutely the player everybody says he is," Simonick said. "He's a Phil Housley-type player and it seems like it will be a great fit. Obviously I've had every player who's ever played here and this is Perreault-like. Gilbert was our franchise for many years, and I hope Dahlin can be like that."

Simonick, who was inducted into the Sabres Hall of Fame in 2000, often talks about how his greatest moments and biggest disappointments were when the team fell two wins shy of winning a Stanley Cup in both 1975 and 1999. Times have been lean in recent years but he believes in General Manager Jason Botterill

"We're starting to collect some talent now and you can see Jason is going in the right direction making the changes we need," he said. "You want to see a turnaround, you want to have early success to start to feel good about yourself. I tell players all the time about how we lost a ton of games in 1974 and missed the playoffs and the next year we were playing for the Stanley Cup. It can happen." 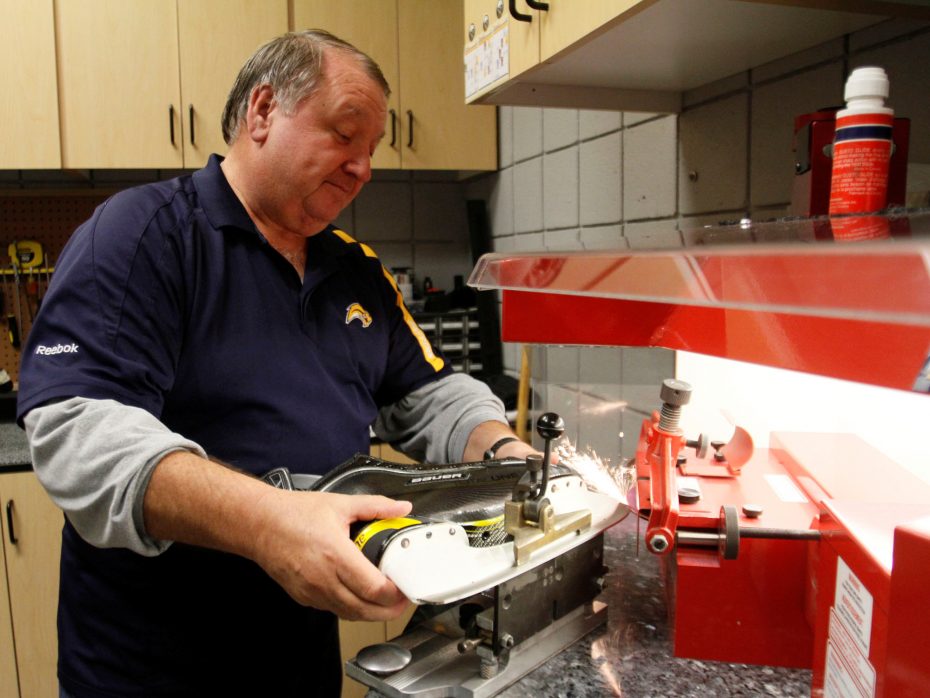 On the same day Simonick is being honored in Orlando, the NHL will be presenting the fourth annual E.J. McGuire Award of Excellence prior to the second round of the draft in Dallas. It will go to the player who best exemplifies the commitment to excellence through strength of character, competitiveness and athleticism. No. 1 overall pick Nico Hischier of New Jersey was last year's winner.

McGuire, a Buffalo native who was Simonick's brother-in-law, served as head of Central Scouting for seven years before his 2011 death from cancer.

"That's just another part of a great day," Simonick said. "The fact that E.J. is honored every year makes me very happy."

View from Sweden: Rasmus Dahlin will be a difference maker for Sabres, but when?

What in the world is going on in Ottawa and how much can the Senators reasonably expect to get back for winger Mike Hoffman in the wake of last week's salacious revelations involving his fiancee?

The story is the talk of Ottawa: Captain Erik Karlsson had a parking lot confrontation with Hoffman near the end of the season accusing Hoffman’s fiancée, Monika Caryk, of online harassment of his wife.

Now Melinda Karlsson has filed an application for an order of protection alleging Caryk has threatened her and posted more than 1,000 negative and derogatory statements dating to November through the stillbirth of the Karlssons' son on March 19.

Caryk allegedly wished the child and mother to die and that someone “take out (Karlsson’s) legs to end his career.”

Hoffman and Caryk vehemently denied they were involved in the situation during an interview Friday with the Ottawa Sun. Caryk has hired a Toronto lawyer to reach out to the Karlssons and the team to conduct a third-party investigation.

“We feel compassion and awful for what Erik and Melinda have had to deal with,” Hoffman said. “I don’t really think it’s correct to be blamed for something without having proof. In this world, you’re innocent until proven guilty.

“It hasn’t been easy. You don’t wish this upon anyone. The comments were, and have been horrendous, and we haven’t had a chance to defend ourselves until this point.”

Hoffman said he again reached out to Karlsson last month about the situation when he learned it was going to court and did not hear back.

Said Caryk: "It’s affecting Mike’s future career. It’s hurting my character, hurting Mike’s character, especially at a time we should be enjoying time away from hockey. This is just so hurtful."

Sure is. It's hard to imagine any team bringing Hoffman – and his fiance – into its locker room until this situation is resolved.

This corner was talking to Hall of Famer and current Florida broadcaster Denis Potvin recently and he said the Capitals' run to the Stanley Cup final was reminiscent of a lot of teams in history who needed to lose first before they finally got over the hump. And that included Potvin's Islanders, who had several disappointments before finally winning four straight Cups from 1980-83.

"And one thing about Alex Ovechkin is he has suffered a terrible fate of having lots of coaches. I had one for 13 years in Al Arbour. He's had whatever number (five). Barry Trotz came in, put in a better plan, gave players a chance to succeed and you're seeing the result, and Ovechkin delivered.

"And I give Ovechkin a tremendous amount of credit. He played with all the adversities from within. Coaching changes, GM changes, players changing. If you want to put a team together for the final, have super goaltending and a defense that's strong and physical. And it's hard to see a better scoring group than what they have now."

All that said, there's this point: Rasmus Dahlin is likely going to make the entire staff look more competent this season.

Inside the NHL: Sabres' Botterill should use caution on trading Ryan O'Reilly