WASHINGTON – Ten years to the day after Tim Russert died, President Trump returned to his own personal mass media network – the @RealDonaldTrump Twitter account – Wednesday to say something that would have likely made the Buffalo-born news icon raise an eyebrow and tear into the president with some polite but very tough questions:

So funny to watch the Fake News, especially NBC and CNN. They are fighting hard to downplay the deal with North Korea. 500 days ago they would have “begged” for this deal-looked like war would break out. Our Country’s biggest enemy is the Fake News so easily promulgated by fools!

It seems quite likely that Russert would be less than impressed with that tweet, and that he would, if he could, follow up on it, keeping in mind his mantra about his chosen profession:

With that lesson in mind, then, let's honor Russert's memory by parsing the president's latest attack on the free press just as the late "Meet the Press" host might have done.

Trump says that NBC – Tim Russert's network – and CNN are "fighting hard to downplay the deal with North Korea." This is true. The Washington Post, The New York Times and virtually all of the mainstream media urged caution in one way or another about Trump's agreement with North Korean dictator Kim Jong Un.

And one can imagine that if Russert were still alive, he would do the same, with a flourish that might make Trump squirm.

One can imagine Trump seated in front of Russert on the "Meet the Press" set this coming Sunday while Russert unveiled on the screen behind him some headlines from 24 years ago, such as this one: 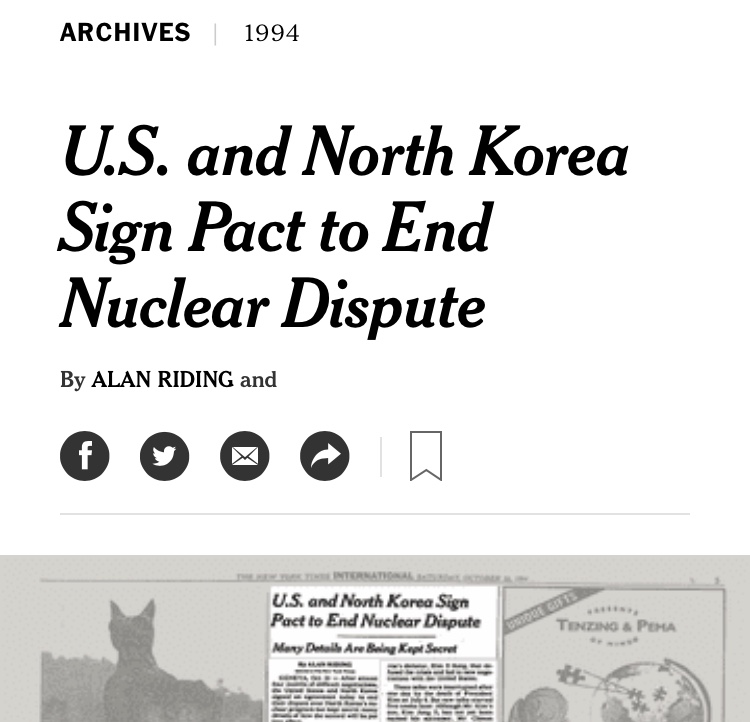 And then Russert would raise that eyebrow and ask something like: "So, Mr. President, how can you guarantee that your denuclearization deal with North Korea won't fall apart the way Bill Clinton's did?"

And that would be a very fair question.

It would have been equally fair for Russert to look back 500 days to see if it did indeed seem likely that war would break out then between the U.S. and North Korea. He would have probably revealed that, yes, Trump has been worried about North Korea for a long time – far longer than 500 days. And to cut the president some slack, Russert would probably re-air this interview he did with Trump back in 1999, where Trump first spelled out his solution for North Korea:

Tim Russert interviewing @realDonaldTrump in 1999 about launching a pre-emptive strike against North Korea.
Could be key to his thinking. pic.twitter.com/PRbDA9r6Jp

"First, I'd negotiate," Trump said in that interview. "I would negotiate like crazy. And I'd make sure that we tried to get the best deal possible."

So one can imagine Russert allowing Trump, grinning like a Cheshire cat, to bask in his diplomatic triumph for a moment before asking him about that last phrase of his tweet:

"Our Country’s biggest enemy is the Fake News so easily promulgated by fools!"

Russert and Trump might go at each other, talking over each other, in discussing that phrase. Then Russert might just try to settle things down and ask the president to watch the following video from a mysterious Facebook page called "Trump News."

And then, Russert might cite Snopes, the venerable and essential fact-checking site, which debunked the conspiracy theory that Canadian Prime Minister Justin Trudeau wears fake eyebrows that fell off during his speech at the G-7 summit last week.

Then, perhaps, Russert would ask Trump something like this: "Mr. President, doesn't this show that this 'Trump News' Facebook page is fake news?"

And after Trump answered, Russert might hit him with a question about the 3,251 false or misleading claims the president made in his first 497 days in the White House and regale him with some of the burger-loving president's biggest whoppers:

And in that more perfect world where Tim Russert would still be alive, he might ask a question that Trump, for the good of the nation, really ought to answer:

"Mr. President, aren't you the one who is pushing fake news on the American people?"

U.S. District Court Judge Amy Berman Jackson presides at a hearing in the federal case against former Trump campaign manager Paul Manafort ... The Reuters Institute for the Study of Journalism holds a news conference to discuss the Digital News Report, a study drawn from 74,000 respondents in 37 countries on digital media consumption ... The Politics and Prose Bookstore holds a book discussion on ''The World As It Is: A Memoir of the Obama White House," with the book's author Ben Rhodes, former deputy national security adviser ... And the Briefing goes on hiatus until Wednesday, June 27, as your friendly Briefer goes on a 10-day vacation.

The Washington Post offers five key takeaways from the Inspector General's report on the FBI's actions during the 2016 election ... And from the right, the National Review says the report is very bad for the FBI ... The New York Times takes us inside a shelter for young undocumented immigrants ... Vox explores the links between prescription drugs, suicide and depression ... And the Wall Street Journal reports that the American economy is charging ahead of those of Europe and Asia.