Few things in this world are more powerful than a story well told.

Stories shape our social interactions and our politics. They mold the way we view the world.

Frighteningly enough, they need not be true to do so.

The ancient Greeks knew all of this in their bones, which is why they spent more time than any ancient culture inventing, imagining, embellishing and, most importantly, recording stories about the meaning and genesis of their own lives and struggles.

The weird, wild and wonderfully complicated world of Greek mythology comes blazing to life in the Shaw Festival's production of "Mythos," an epic show written and performed by the brilliant English writer and performer Stephen Fry.

Fry, whose lacerating wit and penchant for the irreverent is a perfect fit for the many sordid stories of Greek myth, has divided his show into three 2 1/2-hour productions: "Gods," "Heroes" and "Men." 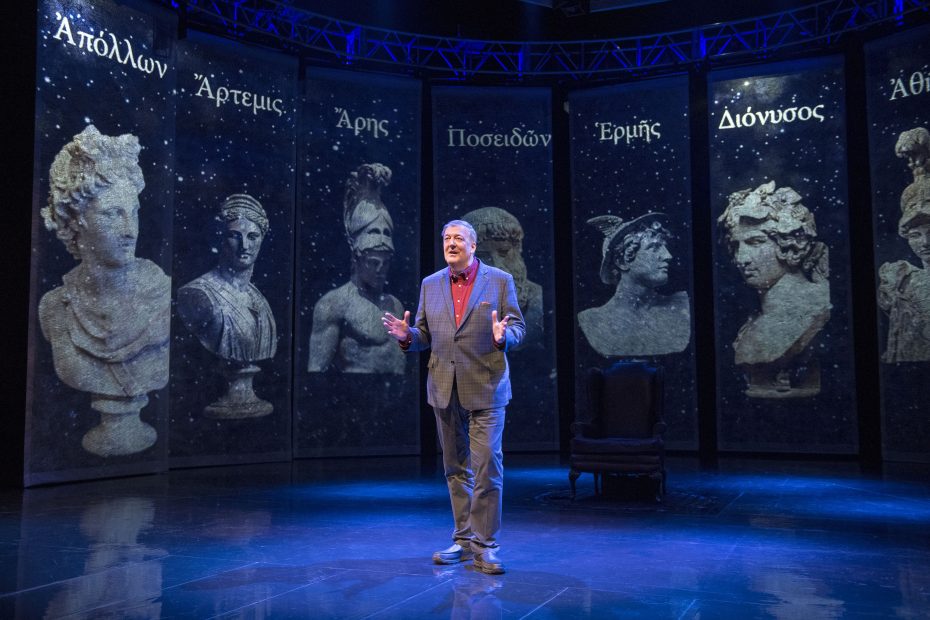 Stephen Fry stands in front of a projection of the gods of Mount Olympus in his one-man show "Mythos" at the Shaw Festival. (Photo by David Cooper)

With many well-chosen digressions into the arcane and the absurd, Fry takes us through all the waypoints you may half-remember from high school English class: Uranus, Gaia and the temperamental Titans; the clash of those Titans with Zeus, Hera and their raging pantheon of persnickety gods on Mount Olympus; Prometheus and the humans he made from clay; Hercules and his 12 grueling labors; and, finally, Odysseus and his epic journey home.

On a set largely unchanged from the Shaw's excellent production of "The Magician's Nephew," Fry emerges from beneath the stage seated, smirking and grandfather-like, in a leather armchair. From the first syllable of the first sentence, he has the audience eating out of his hand.

Fry's stage presence is its own kind of remarkable alchemy. His commentary on the great Greek myths he reveres has Oscar Wilde's irreverence and impatience with the doctrinaire, Dylan Thomas' luxuriant joy in and command of the English language, and his very own brand of bawdy, low-brow comedy.

Like someone who has put in his time reading bedtime stories, he strikes just the right balance between recitation and narration. His voices, which range from cockney to Scottish to Queen Elizabeth to Michael Caine, allow him to imbue each god, hero or man with his or her own distinct personality.

His descriptions are as lively as the tales themselves. The brooding teenage Uranus is "a kind of emo figure" who grows up into "a mix of Morrissey and Michael Corleone from 'The Godfather.'" The fabled war between the Titans and the gods of Olympus is described as "Olympus' Got Talent." Atlas -- you know, the guy who holds up the sky, after whom atlases and the Atlantic Ocean are named -- stands "squatting like a Bulgarian weightlifter."

While the language is thrilling, so too are Fry's interjections of personal meaning and contemporary relevance. His undying love for these stories is obvious, and he makes it clear it emerges not only from a continued affinity for a childhood fascination, but from a very adult realization these stories speak to universal human truths: The urge to be loved, the centrality of sexual desire to the human experience and the never-ending need to go home.

Some tweaks around the edges seem in order for the production to fully deliver on its promise. It's odd and extraneous, for example, to hear Fry's disembodied voice booming a prologue out of the speakers during the first two performances when he would just as easily could have done it himself. The projections mostly stay in the background, but they can become a touch too cinematic and assertive for what is largely an evening of storytelling.

While Fry jokes about the fact director Tim Carroll forced him to do a series of audience-interaction trivia bits called "Mythical Pursuit," it's not clear he has fully embraced them and therefore they sometimes serve as awkward interruptions to the narrative rather than the intended palate-cleansers.

In the shadow of Fry's irresistible performance and Herculean talent, though, these quibbles are almost microscopic.

If you're lucky enough to snag a ticket to one of these performances, or all three, you'll come away with a renewed awe at the power of storytelling and a renewed respect for one of the greatest storytellers we have.

When: Runs through July 15.