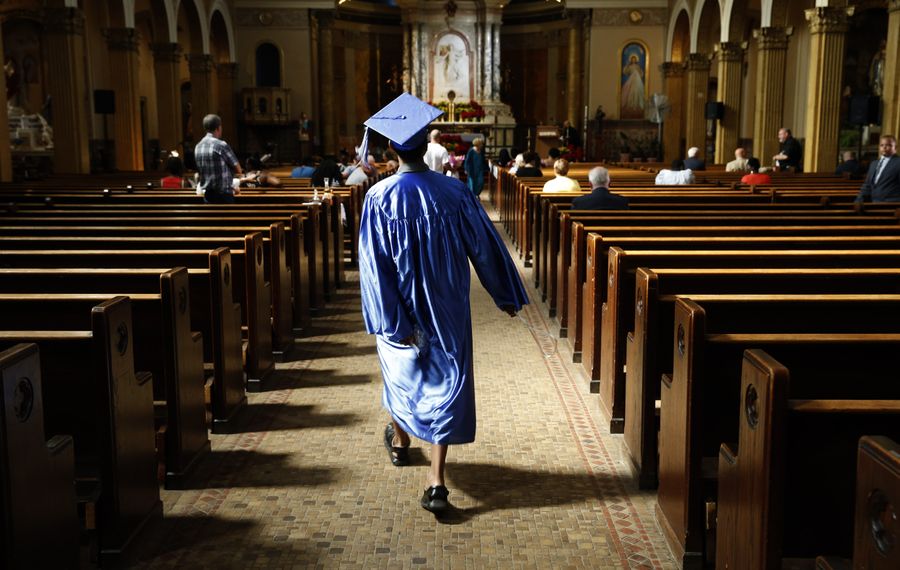 In nine years of classes at Our Lady of Hope Home School in Buffalo, Kayla Hall never missed a single day. Her mother, Tabetha Hall, remembers only one close call. In kindergarten, Kayla went to the dentist and had a tooth pulled. When Tabetha offered the option of going home to rest, Kayla preferred to go to school.

"She wanted to be there," Tabetha said, a commitment her daughter enthusiastically sustained through Tuesday's graduation ceremony at St. Luke's Mission of Mercy, on the city's East Side.

Kayla will attend Mount St. Mary Academy in the autumn. With Joshua Bowman and Marissa Marinaro, she was one of three eighth graders graduating from Our Lady of Hope, part of the same network of grassroots agencies and services on Walden Avenue that intertwine with an outreach program for those in need at St. Luke's.

The three graduates, together since they started, would pause every now and then for celebratory hugs. While a big crowd showed up for the ceremony, everyone was conscious of the guy who was not there. Norm Paolini, co-founder of St. Luke's and a former researcher at the Roswell Park Comprehensive Cancer Cancer, typically would have been a major presence near the altar, helping to lead the music with his guitar.

Paolini died less than two months ago, weakened by brain cancer and Parkinson's disease. But co-founder Amy Betros was at the front of the church, as always, near school principal Pam Krzanowicz. In the pews were such civic leaders as U.S. Attorney James P. Kennedy Jr. and Lorrie Clemo, president of D'Youville College. They stood side-by-side with a battalion of parents and volunteers assembled by Mike Taheri, a Buffalo lawyer and volunteer director of education who sees the school as the engine at the heart of St. Luke's mission.

His essential theory is that you can only change a life by relentless, almost hour-by-hour, support for every child. "If you want these kids to graduate from high school," Taheri said, "you need to stick with them."

With that goal in mind, he looks for tutors willing to make a simple long-term guarantee.

In the 11 years since it opened, the tiny school has produced about two dozen graduates, with 99 percent graduating from high school and then going on to college. Sydnie and Joanah Perkins, Joshua's older sisters, both followed that trajectory.

Sydnie, 23, is employed by Canisius College and working toward her master's degree, while Joanah, 20, attends Canisius, interns with Kennedy's U.S. Attorney's office and is focused on the eventual goal of a law degree.

She and Sydnie reacted emotionally to seeing their little brother graduate, which led Joanah to speak with fierce belief of the work done at St. Luke's.

Her family first came to the mission long ago. Betros and Paolini offered a welcome and a nearby place to live, but the real gift had a kind of life-changing resonance, Joanah said.

"What this place does," she said, "is to take away the veil." 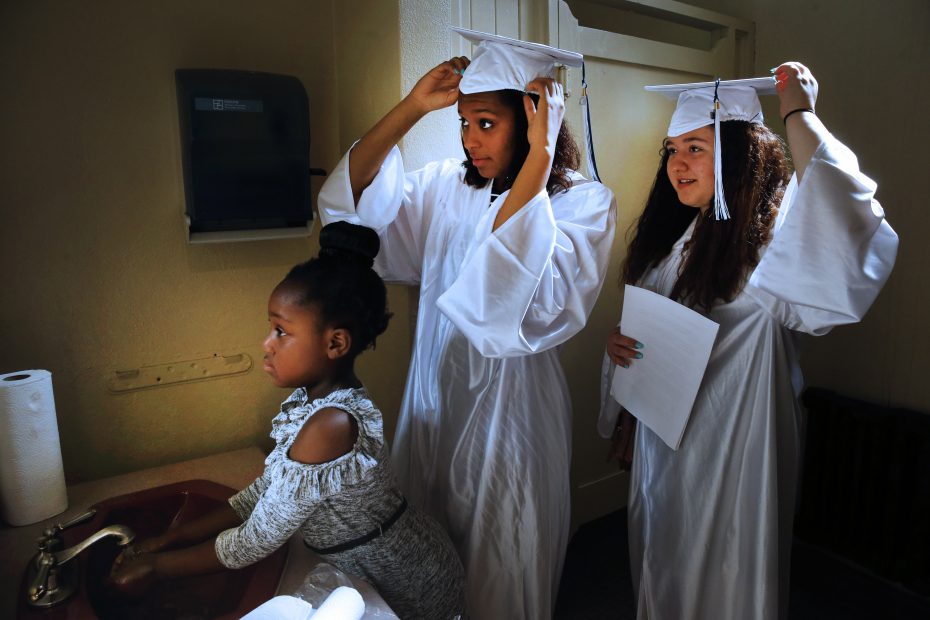 Giulianna Rose Gorre, 7,  admires the reflection of graduating eighth graders Kayla Hall, center, and Marissa Marinaro, right, as they dress for commencement at the St. Luke's Mission of Mercy church on the East Side, where three eighth graders graduated last week from Our Lady of Hope Home School. (Robert Kirkham/Buffalo News)

She is a child of the East Side, an area where she said too many youths - particularly young people of color, like herself - are swept away by addiction, chaos or desperation. Too often, she said, children growing up in the neighborhood fall into what she describes as patterns of survival that lead to paralysis, generations locked into similar and self-destructive lives.

That is all many children will see or know, Joanah said, and their dreams and hopes are caught up in whatever it takes to make it through a month, a week, a day.

From early childhood, she said, St. Luke's opened her eyes to a different vision. There were field trips and excursions to places far beyond Buffalo, and staff and volunteers looking out for her each day, at every turn. That cushion of warmth and reassurance made all the difference, and it is why Taheri said money and materials are less important than the most important donation of all.

What he seeks, what he asks of volunteers, is a promise of their time.

"No one gives up on you here," Joanah said of her family, teachers and tutors. "They always want more for you." It is a living promise, she said, a community rallying behind each child, and she wept at the commencement as she witnessed the result.

There was Joshua, her brother, side-by-side with Kayla and Marissa. All three eighth graders read with command and confidence – Taheri emphasizes reading and writing skills above all else – and each will attend Catholic high schools behind scholarships paid by donors who believe in the cause.

Every student also had a volunteer tutor, recruited by Taheri. Will Ciszewski, a lawyer, worked with Joshua. Tom Davies, who runs an insurance agency, partnered with Kayla. Kathleen Horvatits, a retired probation officer, studied with Marissa.

Those connections meant extra work for children who already spent long days in school. Ciszewski said he routinely arrived at St. Luke's on Saturday mornings with two Egg McMuffins and a glass of orange juice for Joshua, who was always ready. Ciszewski watched with appreciation as the eighth grader wrapped his mind around deeper themes of literature, how he grew intrigued by the meaning of such classics as "The Old Man and the Sea."

"What they're doing there," Ciszewski said of Our Lady of Hope, "it's this crazy, fantastic thing."

Whatever it is, that connection brings back the alumni. Tiffany Velado, for instance, was in Our Lady of Hope's first graduating class. She went on to graduate from Canisius College and now works as a site coordinator for the Bilingual Center of the Buffalo Public Schools.

She paused while trying to put the magnitude of that career into words. On the East Side, she said, whatever dreams you hold can be crushed into dust, made to feel unattainable, long before you reach middle school.

"The biggest thing at St. Luke's is that they make it all seem possible," Velado said. "The word I use is family. They give you the love you need to succeed." 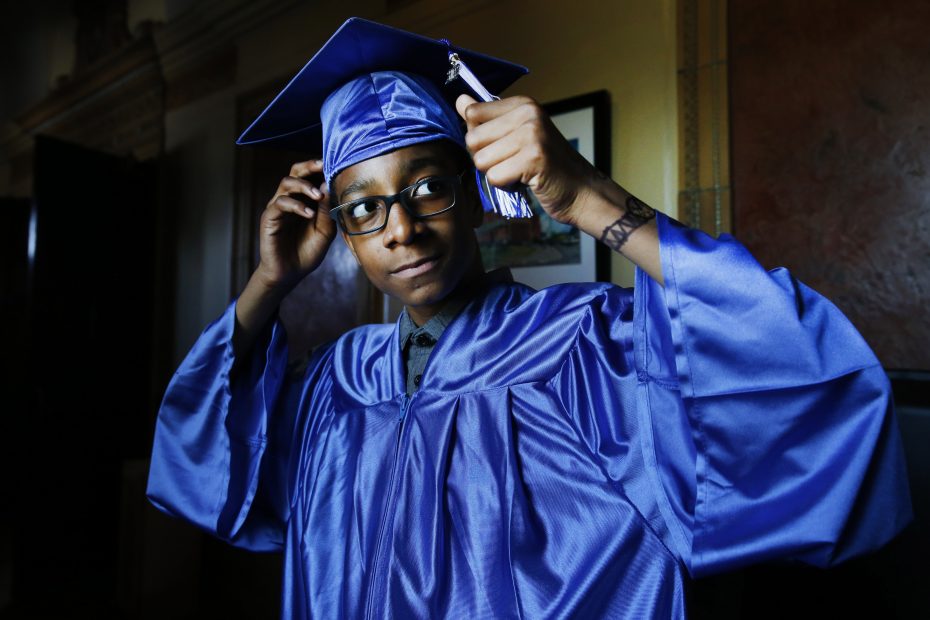 Senior Joshua Bowman proudly puts on and adjusts his graduation robe and cap in a hallway prior to commencement at our St. Luke's Mission of Mercy church, where three eighth graders graduated this week from Our Lady of Hope Home School. (Robert Kirkham/Buffalo News)

And if it is truly family – in the sense of a deep commitment to the next person in line – then how could she not return for graduation?

To Betros, to Taheri, each graduate is a living exclamation point. They are proof of what happens with full investment in young lives in the city – an investment defined by time and love, even more than resources. That success is also a reminder, in a heartbreaking way, of the full and wasted potential of every life sacrificed on city streets.

At St. Luke's, said Joanah Perkins, the entire purpose "is the breaking of a system of abuse." Family by family, pupil by pupil, there is an attempt to confront the layers of despair that lock generations of children into suffering. "How can you succeed," Joanah asks, "if you've been told for your whole life that this is all there is?"

Betros and Taheri understand the easy reaction on graduation day, that the kind of extensive and passionate network supporting the handful of children at St. Luke's seems impossible to consider when multiplied by the needs of thousands. As you read this, Taheri is undoubtedly recruiting volunteers, because his response will always be:

Name something that matters more.