Jessica Underberg learned some things growing up on a farm in Collins, where she was the oldest of six children.

The second thing she learned as a child: You do the work until it's done, not when the clock says it's time to go.

Combine a farm upbringing with a belief in hard work and having fun and you come to see that Underberg might be the ideal choice for her current job: manager/CEO of the Erie County Fair and Erie County Agricultural Society.

That means she is running the Erie County Fair, one of the 10 largest fairs in the country, and overseeing Hamburg Gaming, Buffalo Raceway and the 275-acre fairgrounds with 112 buildings and structures, where there are activities virtually every week of the year run by 50 full-time employees. The number of workers swells to 500 during the 11-day fair in August.

Underberg, 41, is the youngest person, and first woman, to head the fair, but that's not a story, she said.

It has been a slow steady climb to the fair's top job for Underberg, who succeeded longtime CEO Dennis Lang

She started working the front reception desk at the fair, and has moved through most departments over 23 years. She shows her no-nonsense approach when she digs in and works with her staff. 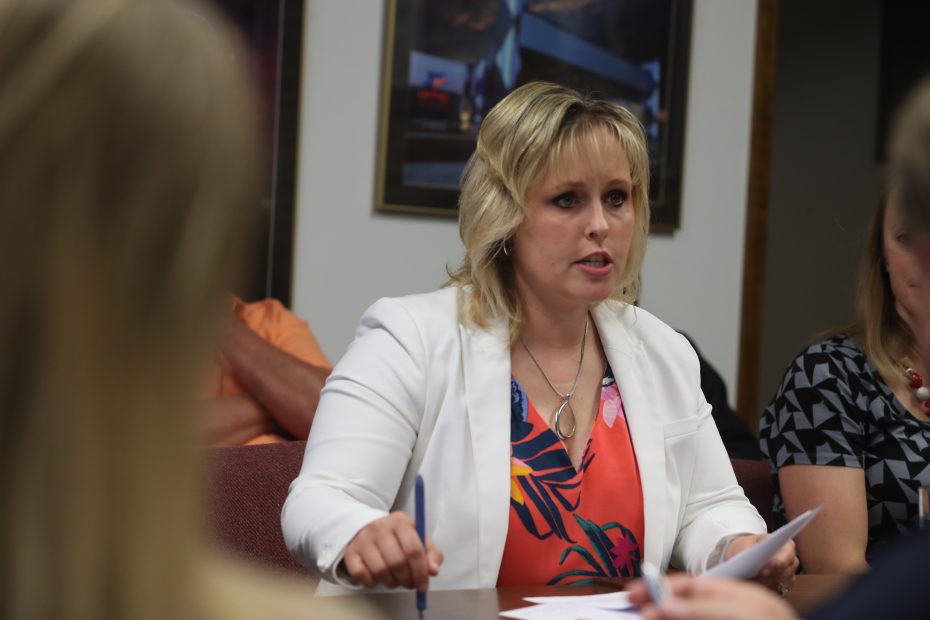 "We're a group here," she said. "I'm no better than you, you're no better than me.  We each have talents, and to pull this off, we have to rely on everybody's talents, because not one of us can do this alone."

Underberg's connection to the fair predates her employment. She remembers she fell in love with the fair as a child.

"The fair is like Disney to me. Growing up on a dairy farm, we never vacationed. We camped in the woods across the street, because we could still walk home and do chores that night and in the morning," she said.

But every year they would go to the fair to show cattle. She also remembers 1992, when she was named master showman in the Junior Department beef show.

"That's the year I finally beat Freddie Bond. I worked so hard to earn that plaque. Freddie forced me to work harder," she said. That plaque, sponsored by Freddie's father at Bond Meats of West Valley, now hangs on the wall in her office under the grandstand.

Underberg brings respect for traditions of the fair with the willingness to try new things. But she says getting the right mix is like walking on a tightrope.

Shortly after she took over, she moved the offices of all but one staff member, moving the receptionist's desk to the main door, the concessions department closer to the front door and making better use of space. She also challenged the staff to take a new look at the fair.

"I kept coming back to, if nothing changes, nothing will change," she said.

A few weeks later, those in charge of the Agriculture Discovery Center told her they wanted to sell the huge combine. The expensive piece of farm machinery was a signature in the building, and had been there since it opened four years ago. She said yes.

Other changes include moving the racing pigs to where the lumberjacks were last year to give them more room, moving Weidner's chicken barbecue stand next to the Conservation building where the butterflies were, and putting the butterflies to where the backyard circus was. Backyard Circus is not returning, and a glass blower is going to go where the chainsaw wood carver stood.

A circus will be located at Gate Five and Gate Four will be pushed out toward South Park Avenue.

The moves, she said, are a way of changing things up without rocking the entire boat.

Working at the fair is a family affair for Underberg, whose two sisters and brother also work there. "I didn't hire any of them," she is quick to say.

Their mother, Jenny Gernatt, was a little worried about how they would navigate their jobs once Jesse became the boss. But Underberg, the mother of two daughters, 13 and 14, is used to "bossing" her younger siblings around, her mother said.

"Do they give her problems? They probably do," Gernatt said, but she added, "When she needs a job done and she looks at them, they know."

And Underberg expects her siblings to perform.

There is no typical day for the fair manager, who can tackle whether to keep water service at two properties the fair is acquiring for parking, or figuring out if a major concert could be held on the day typically reserved for firefighters.

It became apparent that the only night the fair would be able to book ZZ Top was Friday, Aug. 10 – Firemen's Day. That's the day when hundreds of area volunteer firefighters and their families gather on the infield in front of the grandstand and later parade around the track. Underberg checked with the head of security, the person in charge of placing chairs in front of the stage, the cleanup crew, firefighters and others, to see if the two events could take place on the same day.

The answer was yes, with a few modifications. The firefighters will be shifted away from the stage, and the parade will start earlier, to be over about 7 p.m. The concert will start at 8:30 p.m.

"Now it’s a matter of planning the logistics and pulling it off," she said.

Pulling it off is sometimes a matter of hitting an ever-changing target. She's got the farming and show experience to talk about the best ways to keep 4-H exhibitors happy. But there are all kinds of entertainment at the fair, from tractor pulls to demolition derbies to concerts.

"Being here makes me no different than anybody else. I just have more responsibilities, that’s all," Underberg said. "We're pulling the rope in the same direction, and that's all that matters. As long as you're picking up the rope. Because one thing I don't tolerate is lazy. If you're not picking up the rope, we're going to talk."

Underberg is well-known when she walks around the fairgrounds, said Marla Calico, CEO of the International Association of Fairs & Expos, who knows the fair and Underberg well. Underberg will be chairwoman of the organization's board of directors next year - the youngest person to serve in that capacity.

"She's got an inquisitive mind, she's got open ears. If she asks how you're doing, she really wants to know," she said. "You can be a dictator, you can be a boss, but to be a leader you've got to have something that naturally makes people want to follow you."

Underberg understands that the Agricultural Society board took a leap of faith on her. She not only wants to make them proud, she wants to honor the people who helped get her to this place, including former CEO Lang and former manage Lloyd L. Lamb who hired her 23 years ago.

That's why after she got the job, Underberg sent Lamb one of her new business cards with a note: "Thanks for taking a chance on a farm kid."