In the ongoing quest to transcend via the amplified intensity of the perfect live performance, it’s easy to forget that, sometimes, a show is just meant to be a party. For reference, see Thursday night's bouncing bash that was Fitz and the Tantrums, who shook and swayed through a riverside set of pop radio regulars on a pristine night at Canalside.

A lot’s changed since 2012
On the band's first trip to Canalside - exactly six years from this concert - it was a new-soul machine, accompanied by the keys and horns associated with a Stax revue (albeit with frontman Mike Fitzpatrick more David Bowie than Sam & Dave). That “Picking Up the Pieces” iteration hasn’t been abandoned, but the soul vibe is now layered under an avalanche of clap-, whistle- or coo-inducing dance pop that’s proved relentlessly catchy.

Let’s dance
From the get-go of “Get Right Back” to its throwback to “Moneygrabber” to an encore performance of crowd favorite “Handclap,” the sextet conducted a stellar dance blast. In the process of toiling through material cultivated for record and radio, the group revealed that, when live, its pristine studio production is replaced by soulful roots that remain the foundation of the operation.

Compliment Fitzpatrick’s vocals, John Wicks’s drum work or James King’s incendiary sax work. But vocalist and percussionist Noelle Scaggs is the straw that stirs the Tantrums’ drink. Whether inciting the crowd with call-and-response, dancing through numbers or announcing herself as “bosslady of the band” before “Roll Up,” she kept the night grooving forward. 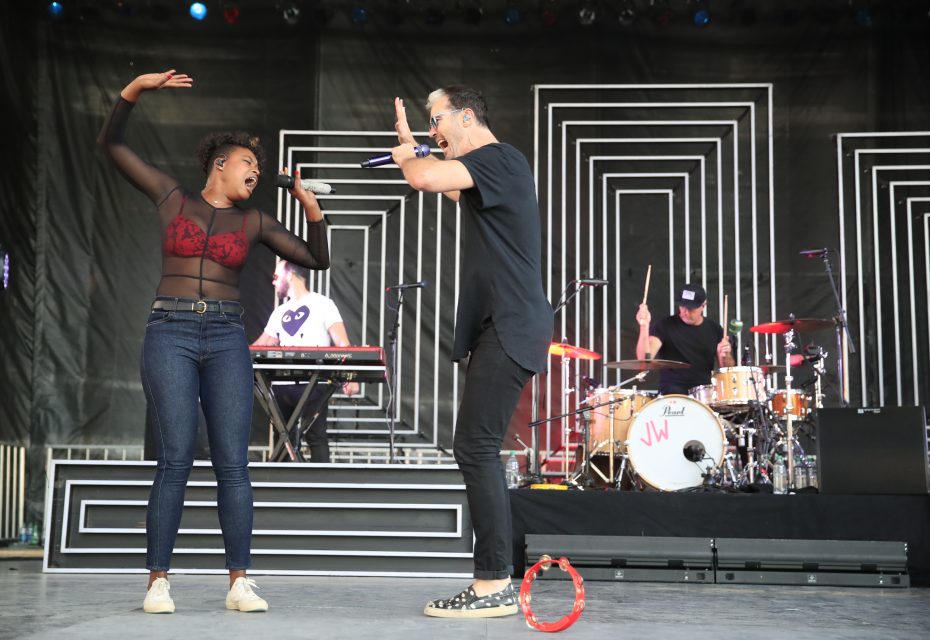 Noelle Scaggs and Mike Fitzpatrick of Fitz and The Tantrums put on an energetic song and dance display during the band's concert as part of Canalside Live. (Harry Scull Jr./ Buffalo News)

Ekko before the Tantrums
Entertaining the early arrivals was performer and producer, Mikky Ekko. Fronting a quartet that pin-balled between moody synth and swirling guitars, the grizzly Ekko—who has produced such pop royalty as Rihanna and The Weeknd—manned his set with dramatic, plaintive delivery. Debuting tracks like “Let Me Down” and “Rest in Pieces,” he traversed his creative brand while serving a taste of what’s to come.

Fitz and the Tantrums, July 14 at Canalside Live

- Smiles at Fitz and the Tantrums

- Photos from the performance of Fitz and the Tantrums, Mikky Ekko