Before he became the “Wizard of Westwood” and won 10 national championships coaching basketball at UCLA, John Wooden found inspiration from watching how another coaching legend, Frank Leahy, ran his Notre Dame football practice.

“I thought my basketball practices were well-organized and efficient. After observing Coach Leahy’s practice, I realized more work was needed,” Wooden said in the book "You Haven’t Taught Until They Have Learned," written by former UCLA player Swen Nater and professor Ronald Gallimore.

“I absolutely did pick up some tips,” Witherspoon said afterward. “The pace of it, the rhythm of it, the tempo of how fast it moved and how guys got from place to place.”

Following practice, Witherspoon had a brief meeting with Bills coach Sean McDermott and made plans to talk again in the future. “I want to get with Sean and find out how he’s able to get guys to retain information with getting them to move in and out so fast,” Witherspoon said.

A lifelong Bills fan, Witherspoon formed a friendship with former Bills coach Wade Phillips when he took over the University at Buffalo program in the late 1990s.

“I didn’t take in many practices, but we’d talk from time to time,” Witherspoon said. “This was the first time I could sit and watch a practice and pick up as much as I could.”

During the visit, Witherspoon shared stories about the Canisius team watching the Bills’ “snow-globe game” victory over the Colts on a cellphone at the airport, getting score updates in the locker room from the Bills’ playoff game in Jacksonville before a contest at Siena College earlier this season, and how passionate the Griffs’ top player from last season, Niagara Falls native Jermaine Crumpton, is about rooting for the Bills.

It was the second time in as many days that Bills fan coaching college basketball were on the sideline. Carlin Hartman, the former Grand Island High School star who is now an assistant at Oklahoma, and University at Buffalo assistants Bryan Hodgson and Jamie Quarles attended Wednesday’s practice.

Special thanks to @derek_boyko of the @buffalobills for a very special day. Coach McDermott, GM Brandon Beane and the great Kyle Williams are building a great franchise in Buffalo. Thank you again! #goBills pic.twitter.com/HOfBazcWKx 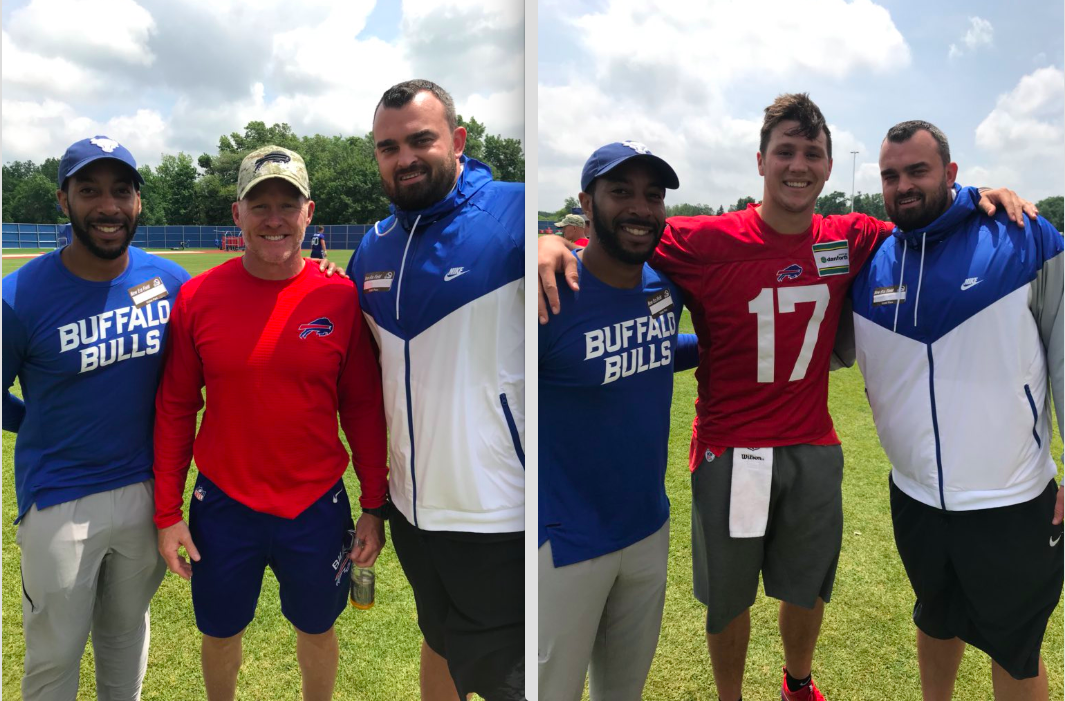 Hodgson, a Bills season ticket holder, said he and Quarles got the opportunity to talk about leadership with McDermott for 15 minutes. "Coach, asked me 'what did you guys do this year that caused you to have so much success?' " Hodgson wrote in a Twitter direct message. "I started to respond and the guy starts taking notes. Meanwhile I’m thinking, I should be asking the questions here."

In an interview with BNblitz.com last season, Hartman said, “As a coach myself, I respect what it is they’re doing with the franchise. Getting guys that are going to be accountable and earn their playing time through practice, week in and week out. It’s headed in the right direction.”