It was a foregone conclusion Joe Lovullo and his new wife, Lorrie, would be at New Era Field for their wedding pictures Saturday.

The couple was engaged in the bus parking lot back in September 2016, after all.

But having their wedding party crashed and photo-bombed by rookie quarterback Josh Allen and a couple of his teammates? That was something the Lovullos never saw coming.

For a pair of self-described Bills diehards, it also created a lifelong memory.

"I've been a Bills fan since the day I was born," said the 35-year-old Lovullo, who works as a contractor for the Army Corps of Engineers. "We wanted (to take pictures on) the field, but unfortunately they told us last week there was an event on the field and we could not get on it. So we said, 'OK fine, we're still going to go. We'll take pictures outside. We'll get New Era Field in the background.' Just her and I were taking pictures, and everyone is screaming. I'm like, 'What the heck is going on?' They're like, 'Josh Allen's here.' I'm like, 'You've got to be kidding me.' "

The rookies were on their way back to the Bills' facility from Lorenzo Alexander's charity bowling event.

"They didn't really recognize who we were at first," Allen said. "I was like, 'Hey, can we take some photos?' One guy realized it was a few Buffalo Bills players and they kind of freaked out."

Lovullo and his wife soon will move into their new home in Cheektowaga. Come September, they'll be back at New Era Field as season ticket holders.

"I'm very excited. I'm glad they finally took that jump and got a quarterback who could potentially be a franchise guy," Lovullo said. "No more stopgap guys. We need somebody. We haven't had a solid quarterback since Jim Kelly. I loved some of the other guys. But truth be told, we haven't had a face of the franchise since Kelly." 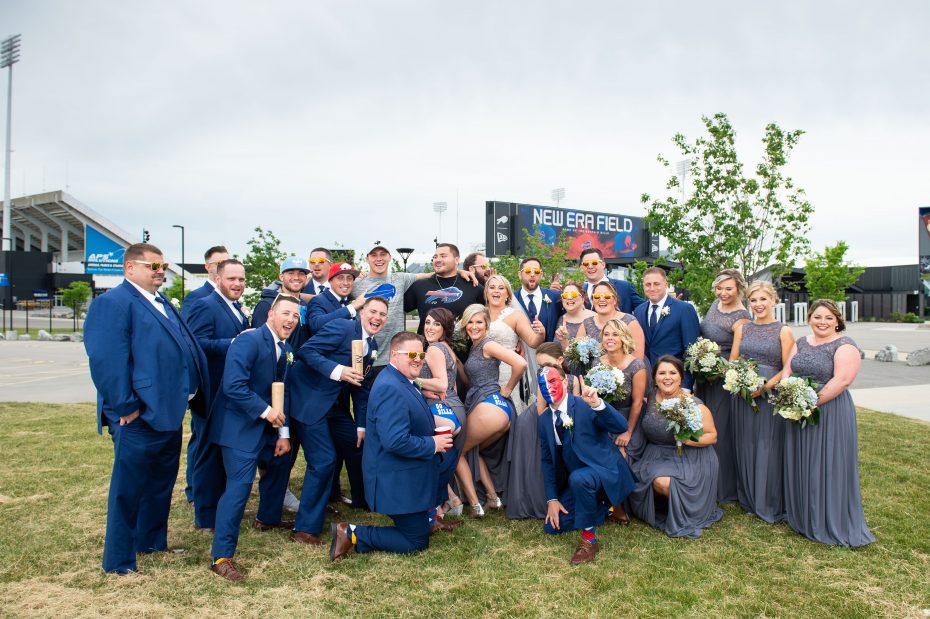 So did Allen have any words of wisdom for the newlyweds?

The Lovullos appreciated the gesture from all three rookies.

"Just a class act for young guys to come and do that," Joe said. "They wanted to give love to his fans. That was big. They didn't have to do that."

For Allen, it was an up-close look at the passion of Bills fans.

"To get out and to meet people in the community of Buffalo, it's been pretty awesome," he said. "Everybody's been so welcoming, so nice, and so passionate about football. Every time I talk to someone who's a Bills fan, all they say is 'it's a great place to play. We're going to love you to death here.'

"I've been saying it all along: The Bills have the greatest fan base in all the country," he said. "This makes me believe it more. For somebody to take those precious photos in front of our stadium ... that's pretty awesome."

The Bills on Monday announced the hiring of former NFL tight end Keith Jennings as their BLESTO scout.

Jennings, 52, played nine years in the NFL, including six with the Chicago Bears. He most recently served as undergraduate tight ends coach at Clemson while finishing his business degree. Jennings was a scouting intern with the Bills during last year's training camp and is a product of the Nunn-Wooten Scouting Fellowship, which has been run by the NFL since 2015 and is designed to give former college and pro players exposure to a potential scouting career.

"Keith interned with us last year and we really liked what we saw from him," Bills General Manager Brandon Beane said. "He played in the league, he coached at the college level and he worked extremely hard during his internship in scouting with us. In fact, he went above and beyond at the Senior Bowl and Combine to further strengthen his scouting resume. He will be a good addition to our scouting staff."