Outside of favorites such as Germany, Brazil and Spain, the tiny country of Iceland is a trendy team to root for during World Cup 2018. In a group with Argentina, Nigeria and Croatia, the country that shocked the world by reaching the Euro 2016 quarterfinals is back to prove its last surge wasn't a flash in the pan.

Iceland, a Nordic island nation with a population of just 340,000 people, captured the hearts of world soccer fans by knocking England out of the European Championships before falling to France, 5-2, in the quarterfinals.

The gritty, tough-defending side - boasting fierce leaders like Aron Gunnarsson - then topped its group in World Cup qualifying, finishing 7-1-2.

Bjarki Benediktsson, a soon-to-be redshirt senior for the Canisius College men's soccer team, is a native of Hafnarfjorour, Iceland, a city on the southwest coast. The defender represented his country at the u-17 and u-19 levels before moving to the United States to play for Boston University and then Dermot McGrane's Griffins, with whom he earned second-team All-Metro Atlantic Athletic Conference honors last fall.

Benediktsson took a few moments during his vacation at home in Iceland to discuss the prospects of the national team, the iconic "thunder clap" cheer and players to watch during the 2018 tournament.

Q: You're in Iceland right now, just a few days before the World Cup kicks off in Russia. What's the feeling like there?

Bjarki Benediktsson: You can definitely feel the tension and the excitement. Everyone seems to be organizing their lives around the games, planning where to watch, what to eat during the game, and such.

The first game against Argentina is only five days away so, the excitement is certainly understandable.

[Read: Hear from Benediktsson's college coach on why the World Cup is so special]

Q: Growing up, did you have any hint that Iceland's international team would rise to where it is now?

A: There have been some hints in recent years. The core of today’s team reached the u-21 Euro Championship in Denmark 2011. Also, in the last decade or so Icelandic youth national teams have been achieving some great results, qualifying for Euro Championships in u-17 and u-19. I do admit, however, I thought the rise would take a longer time.

Q: Do you have any memories - fond or not - of the Iceland MNT?

A: I do remember seeing the Iceland MNT beating Italy 2-0 in a 2004 friendly match, a game I will probably never forget. Italy had players such as Buffon, Materazzi, and Gattuso, maybe even Pirlo or Totti, I can’t quite remember. Icelandic star player Eidur Gudjohnsen scored the first goal for Iceland.

Q: You've played for Iceland youth national teams over the course of your career. Do you have any personal connections, specific people you're pulling for involved in the squad?

A: There are three players on the squad that I played with in the youth national teams: Sverrir Ingason, Hörður Magnússon and Arnór Traustason. I know them fairly well and would of course like to see them play at the tournament.

Q: Because of his time in the English Premier League, Gylfi Sigurdsson is probably the best known Iceland player to Americans, and that's about it. Who else should we keep an eye on in this World Cup?

A: I would recommend keeping an eye on Johann Gudmundsson, the Burnley winger. He can be very explosive and has a great left foot. He had two goals and eight assists in the EPL last season.

Another player to watch is captain Aron Gunnarsson (assuming he recovers from his injuries in time), a midfielder for Cardiff City (in the English Championship). He’s not a flashy player by any means, but if you want to see a clear example of a leader, he’s the guy. A great defensive midfielder who wins tons of tackles, runs endlessly and never gives up, a guy who does the dirty work.

One more interesting player is Albert Gudmundsson, midfielder-attacker for PSV in Holland. He’s an extremely creative, young player who recently got called up to the national team. He might not play at all in the tournament, but if he does he could conjure up something great. 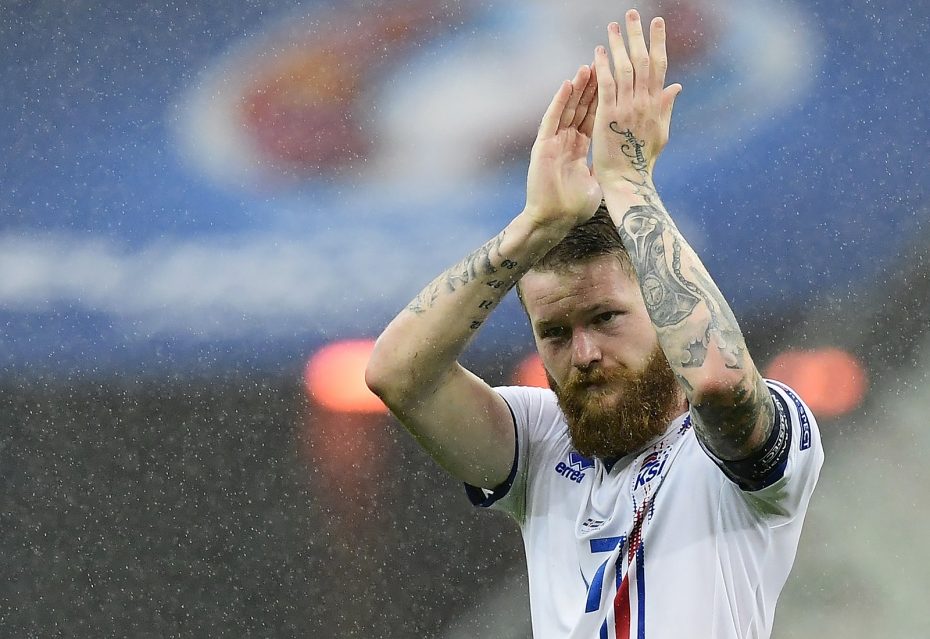 Iceland midfielder Aron Gunnarsson, pictured acknowledging the fans after Iceland fell to France in the Euro 2016 quarterfinals, is a player to watch, assuming he's at full fitness for the World Cup. (Tobias Schwarz/Getty Images)

Q: How does the thunderclap make you feel? Is the Tolfan - the supporters group for Iceland - as legit as it sounds?

A: I was actually fortunate enough to go see the team play vs. Ghana on June 7. When Tolfan tells everyone in the stands to be quiet, the banging of the drum begins and a whole stadium claps their hands and yells “HÚH," you can’t help but get goosebumps.

I only hope enough Icelanders go to Russia to cheer, so the thunderclap can be heard in all its glory.

Q: The Euros proved that Iceland's soccer team needs to be taken seriously. How do you think the country will fare in World Cup 2018?

A: I honestly think that we can beat every single team in our group. Croatia has been somewhat of an arch-nemesis for us through the years, but we’ve beaten them before.

Everyone knows Argentina and the star-filled offense they bring, so I can only hope the Icelandic players show up prepared. And Nigeria is a big question mark, but we can definitely beat them.

I’d say going all the way is a bit farfetched, but a run to the Round of 16 or the quarterfinals is certainly possible.