The cleats tell a story, opening a fairly wide window into Jeremy Kerley's life beyond football.

"Everything that matters to me," the leading candidate to become the Buffalo Bills' new slot receiver said while staring down at the letters he scrawled on each one.

The mission was to create something that would, literally, be with him on every step of his professional journey. So he picked up a black marker and went to work on his white shoes, paying tribute to his wife, their three kids, their wedding anniversary, his deceased brother, and even some choice words to live by.

"Everything that's in my world," Kerley said after a recent organized team activity practice.

"That was my dude," said Kerley. "It was around 2 or 3 in the morning. He had gotten into a fight earlier and he had some internal bleeding on his brain. So he was driving home, kind of dazed out, and crashed the car. The steering wheel crushed his chest."

Wilson's spirit lives on. How could it not?

"He was one of the funniest and craziest dudes I know," Kerley said. "Very loud, obnoxious kind of loud. You either loved him or you hated him. I loved him." They were an odd pairing, given Kerley's mostly subdued personality. However, they shared what Kerley calls a "family saying" that continues between Kerley and his other brothers: "Loyalty before betrayal. God first, family next." The letters of each word, LBBGFFN, appear just above the Nike swoosh on his right shoe. 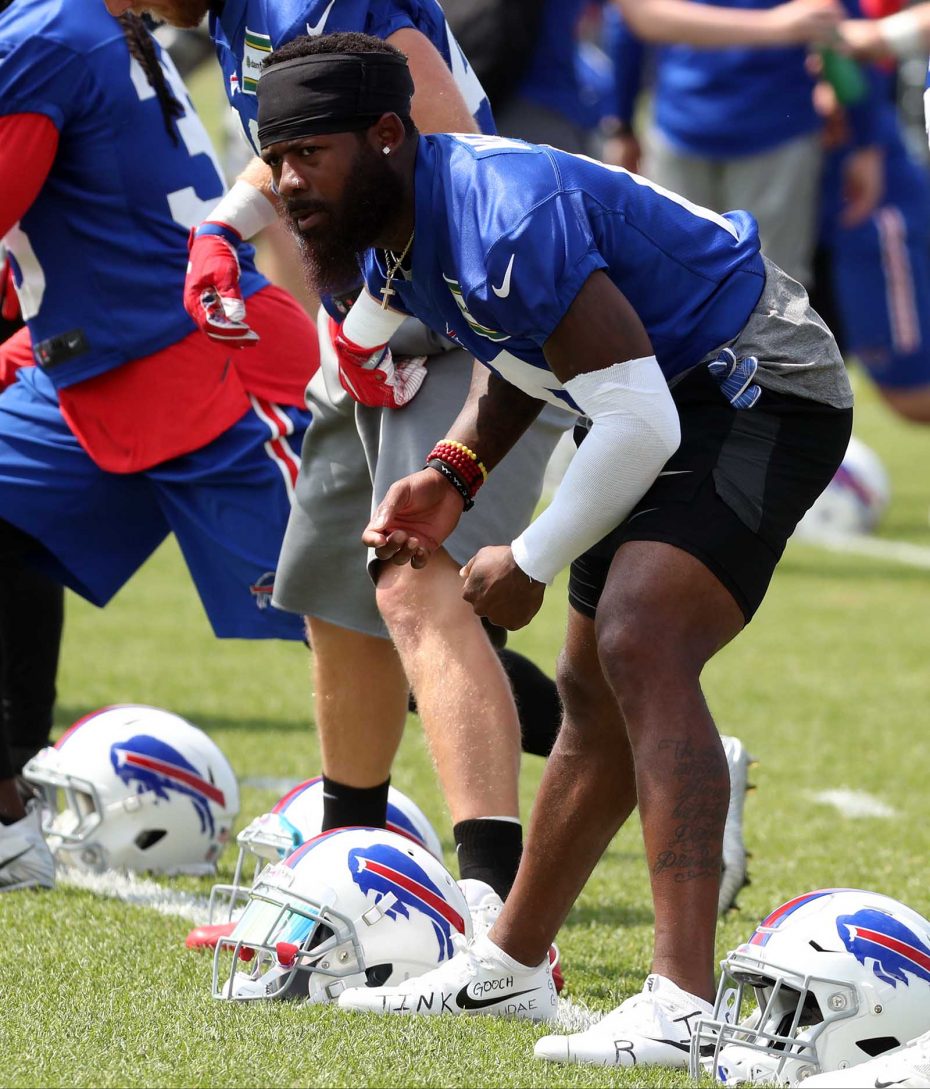 NFL rules prohibit players from wearing cleats with personal messages in games, so Kerley wears this pair in practice and pregame warmups. That's sufficient enough to remind him of what's truly important while providing a compass of sorts in case he should veer off course as he did last season with the New York Jets.

Kerley was playing some of his best football ever in his second stint with the team. Through the first five-plus games, he had a remarkable streak of 19 catches on 19 targets.

Kerley, who signed with the Bills on April 16, began his career with the Jets in 2011 as a fifth-round draft pick from Texas Christian University, was released after the 2015 season and bounced from the Detroit Lions to the San Francisco 49ers before returning to his original team five days before the 2017 opener. Entering the sixth game of the season, against New England, the streak stood at 17. Kerley caught his next two targets, including one for a touchdown, against the Patriots.

The official statistics from the Jets' 24-17 loss show a third target for Kerley, although that might be a generous interpretation. On fourth-and-16 from the Patriots' 49, Josh McCown launched a desperation throw that had virtually no chance of being caught. "I just happened to be in the area and I tried to do everything I could to catch it, because I knew the streak was over with," Kerley said. "But it was cool, because a lot of people, they see me as just a slot receiver, a guy that's just used on third down and all that. I wanted to show everybody else, it doesn't matter what it is, if they throw the ball to me, I'm going to catch it. That's my job."

"For him to catch 19 in a row, that's absurd,'' Jets receiver Jermaine Kearse told the New York Post. "He's just got a dog mentality. That's what I appreciate about his game the most. He's going to do whatever it takes to win. That's someone you want playing next to you.''

Kerley would play three more games, and catch three more passes, before it all came crashing down. He was suspended for four games for violating the NFL's performance-enhancing substances policy.

Suddenly, the heads he had made turn with his play were casting wary looks in his direction.

"Obviously, as an NFL player, you've got to be aware of what you put in your body," Kerley said. "It's a mistake that I made, but ... " He paused, then said, "I've wanted to comment on something for a long time."

Not about what he did, but what he said. "About the old 'Ghost' comment," Kerley said. He had caused a little bit of a stir when talking with reporters with the following explanation for how a banned substance got into his system:

"I don't know, a lot of ghosts around here. Ghost put it in. You know, the ghost of Christmas past."

Looking back, he saw it as a harmless line and still can't figure out how everyone failed to grasp that he was joking.

"I feel like for anyone who had a sense of humor, anyone who has any kind of humor about them, they would have understood that comment," Kerley said. "I feel like people took it and ran with it. That's just the nature of the business that we work in and that we live in.

"Everyone wants me to say, 'I'm so sorry, I shouldn't have ... ' That's already understood. I accept the punishment. There's no more punishment than a four-game, not being paid. That's the ultimate punishment. What else can I say?" 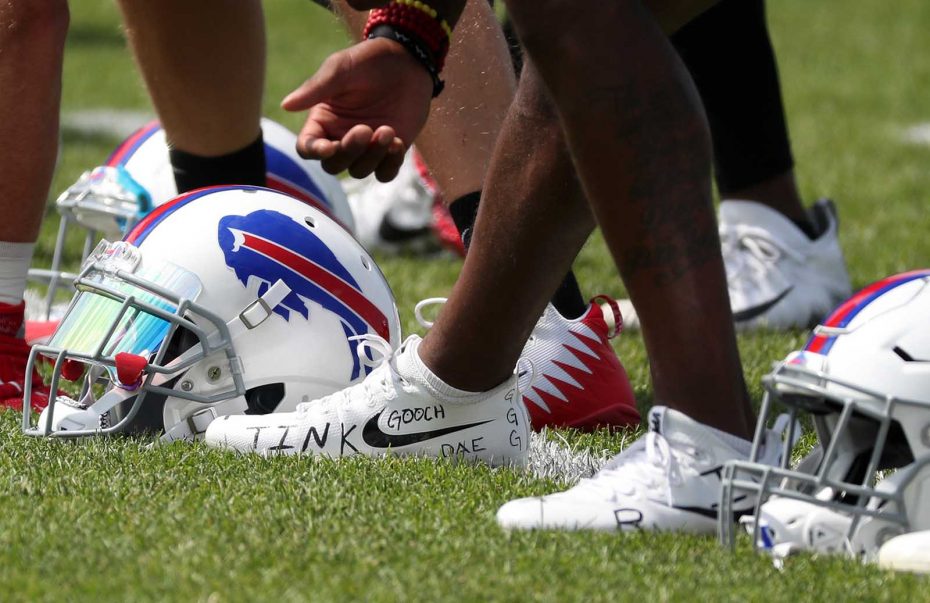 Soon after his reinstatement, the Jets released him. Kerley knew that was a distinct possibility, given the combination of the suspension, the fact the Jets were virtually out of playoff contention and there were several young receivers the team wanted to see play.

He doesn't hold any grudge against Jets General Manager Mike Maccagnan and remains grateful he gave him another opportunity after Kerley's release from the 49ers.

Kerley also had no problem when the Bills grilled him about the suspension before signing him to a one-year contract for $790,000.

As much as Kerley doesn't necessarily want to be strictly defined as a slot receiver, his prowess from the slot is largely what made him attractive to the Bills. Kelvin Benjamin is the team's clear No. 1 wideout. After that, it's a muddled picture, especially with leading No. 2 candidate Zay Jones recovering from knee and shoulder surgeries. It's fair to say there's plenty of room for a newcomer to make an impact.

In Kerley's view, labels don't mean anything. "I just look at myself as a guy who is an outlet for the quarterback," he said. "In the game, whoever's open, that's who's going to get the ball. And that's how I approach it."

Nevertheless, according to analytics data from Pro Football Focus, Kerley led all NFL receivers in drop-rate when lined up in the slot last season by catching 90 percent of his targets (18 of 20). It's such numbers that helped convince the Bills he'll be a good fit in the scheme of new offensive coordinator Brian Daboll, who will incorporate plenty of the horizontal-type short and intermediate passing with which Daboll was involved in two stints as an assistant coach with the New England Patriots.

"He can play Z (outside) or he can play slot," Bills General Manager Brandon Beane said of Kerley. "Sometimes the smaller guys on the outside get covered up a little bit. I think he's really going to do most of his damage inside. He's got the quickness, the feel, the instinct.

"We've seen what some of those guys in the New England-based offense have done, a little different than how (it was done in) the offense we were using last year in the West Coast," Beane said. "I think it's a natural for him to spend most of his time inside, but he can definitely still win outside if you needed him to.

"He's kind of what I call an under-the-radar guy. Doesn't get talked about a lot, despite an accolade like (catching 19 passes on 19 targets). He's come in, he's been a pro, he's worked hard and so far we're pleased with where he's at."

In assessing the free-agent market, Kerley concluded the Bills presented "the best opportunity for me and for my career." He saw last season's playoff appearance as a plus. He insists the uncertainty over who will start at quarterback, and that the job could very well go to a rookie, wasn't factor.

"I love all three quarterbacks," he said of AJ McCarron, Nathan Peterman and seventh overall draft pick Josh Allen. "I've played with a number of quarterbacks – young, old, rookies – so it doesn't bother me. It's my job to come in and try to better myself and better the guys around me, the receivers. Whoever they pick at quarterback, that's up to them.

"Right now, I'm trying to establish a bond between all of them."

Kerley is good at forming and maintaining bonds. His cleats say it all.