This is Part 2 of a two-part series. You can read Part 1 here.

A straight-A student throughout elementary and middle school, he maintained that lofty status through his first two high school report cards. But when the third nine-week grading period arrived home, there it was – a B in world geography.

“I was devastated,” White said. “That showed me nothing’s given. You can’t get complacent. I was mad the whole day ­– I’m still mad about it – but it motivated me to continue to work.”

The teacher who gave White the grade, Chris Wilson, was blunt with him.

Lesson learned. By the end of the school year, White had his A grade back.

“He didn’t want to be average,” Wilson said. “Nothing he did was average.”

By the time White left Green Oaks High School – which had a dropout rate of more than 50 percent in those days – he had a 4.3 grade-point average and served as class valedictorian. From there, it was off to Louisiana State University, and now the Buffalo Bills.

The second-year cornerback returned home on the first weekend of June to host a football camp for nearly 450 kids. The Buffalo News tagged along and interviewed lifelong friends, family members, coaches and residents.

Tre'Davious White at his football camp in his hometown of Shreveport, La. (Photo courtesy of Henrietta Wildsmith/Shreveport Times)

Not surprisingly, White’s talk to campers focused not just on football, but the importance of academics.

When he started high school, White was part of a class of about 400. By the time they graduated in 2013, that number dropped to about 150.

“I was the first boy to be valedictorian in my high school in a long time,” White said. “I took it very seriously. A lot of people don't know I graduated with a 4.3 grade-point average in high school. I wanted to show that I was different – that I wasn't just a great athlete, that I could also do it in the classroom.”

On one of White’s first days as a freshman, Wilson asked a simple question of the class: What do you want to do? White wasted no time with his answer.

Teachers, coaches, family members and even White’s peers all saw the same thing – a kid who would not be stopped in the pursuit of his goals.

“He never let anyone outwork him,” childhood friend Quadre Heath said. “I spent just about every day with him, and it just wasn't going to happen. … Even though I was older than him, I looked up to him.”

A star in the making

Before he even arrived in high school, people knew about Shaq – the nickname White goes by in his hometown. He had incentive to run fast at a young age.

“You’re 9 years old, and you’re racing someone who’s 17 and on the high school track team,” said DJ Yoshi, White’s cousin. “You’ve got your big brother or your big cousin saying you better not lose, or they going to beat you up. It makes you run fast. You on the street with no shoes on, hot pavement in the summer time, and you're running.”

It wasn’t long before White was winning those races.

“I actually met him back when he was at Linear Middle School,” said Curtis Evans, White’s business education teacher and assistant football coach at Green Oaks. “I knew he was going to be a special young man. He was a ‘yes sir, no sir’ kid. The teachers in his middle school always bragged about how he was a great student-athlete. When he got to high school, we already knew that he was going to be spectacular.”

Not just in football, either.

“I thought that he was going to be an NBA star,” said Leontine Ruffins, White’s grandmother.

Tre'Davious White: 'I come from hard times, and I don't want to go back'

White idolized Kobe Bryant growing up, and says in his Bills’ bio that if he could play another professional sport, he’d want to be the point guard for the Los Angeles Lakers. White was a second-team Class 3A all-state selection as a senior guard in 2013. He also ran track.

“We took sports real serious,” Heath said. “We'd get up to school about 7 o'clock in the morning, and we'd leave at 11 o'clock at night. If we did go home early, we’d watch basketball games. ... We never had any time to care about getting in trouble. It was around us, but sports kept us busy and away from it.”

The only parties White went to when he was in high school were his own – one for graduation and another a going-away party before leaving for LSU.

“That just wasn't my scene,'" he said. "It was something I didn't want to be a part of, because of the things that were going on. People in high school were getting shot and killed at parties. I sacrificed that, the night life, to set myself apart and try to be different.”

White would typically work out in the morning, go through practice for whatever season it was in the afternoon, and then complete a third workout in the evening.

“We’d tell him, ‘Shaq, you need to slow down,' ” said Evans, who spent two years as White’s defensive back coach, and one year each as offensive and defensive coordinator. “It was always, ‘Nah coach, I’ve got to go get it.’ That’s what set him apart, was his determination. He was determined to make it out. He was always the playful, goofy kid. A lot of times in practice, you'd think he was joking around, but he was always still observing everything you said.”

“I just wanted it that much more,” White said. “To separate myself, I just couldn’t do the workouts that the team was doing, I had to do a little more. You've got to go the extra mile to set yourself apart.

"That's what I'm continuing to do now at the pro level. Not doing what I'm asked to do, but doing more.”

As a junior at Green Oaks, White played quarterback and cornerback. He passed for 1,710 yards and 20 touchdowns, rushed for 804 yards and eight touchdowns and also added 45 tackles and four interceptions during the 2011 season. That got the attention of LSU recruiters.

By the time the 2012 season rolled around, White was a five-star cornerback prospect in the class of 2013. Rivals.com listed him as the No. 18 prospect in all nation and the No. 4 cornerback, while 247Sports had him ninth nationally and second among cornerbacks. Both websites considered him the best player in Louisiana. He was a first-team Class 3A all-state pick by the Louisiana Sports Writers Association as a senior, accounting for 11 touchdowns.

Despite his individual success, White’s Green Oaks teams never won more than three games in a season. The school had to play its home games at nearby Northwood High School because their field lacked bleachers and a scoreboard. In a good year, the Giants would have about 30 players. Most of the time, it was less than that.

“We'd have maybe 15 guys who would come to summer workouts,” White said. “Then school starts, and everyone wants to play football, but when it comes down to coming to practice and putting the work in and having the grades, we'd be down to 25 kids. That's all we had. We had four or five guys on the team who maybe took it serious. The other guys were just doing it.” 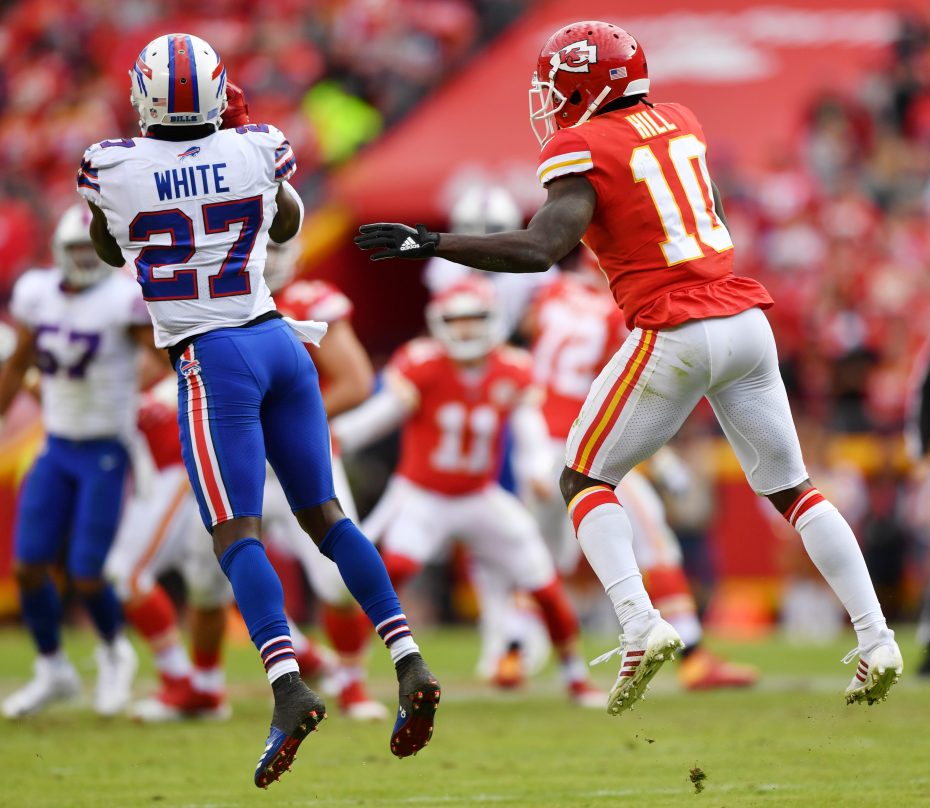 White was never just along for the ride. His dogged determination made a lasting impression on his coaches.

“His freshman season was my first year coaching,” Wilson said. “I’m going into my 10th season, and I haven’t had another player like him. I model how I coach trying to get kids on his level. He's an example of what hard work does. He's an example of overcoming trials and tribulations, making sure he did what he needed to do in order to achieve the goals that he wanted to achieve.”

White’s academic accomplishments didn’t end at Green Oaks. He graduated from LSU in December 2016 with a degree in sports administration, carrying a 3.0 GPA throughout college. Although he could have been a first-round draft pick after his junior season, he returned to school to become the first of his seven siblings to graduate college.

Before Tre’Davious White, there was Morris Claiborne. Also a Shreveport native, the 28-year-old Claiborne is five years older than White. He went from Fair Park High School to LSU to the sixth overall pick in the 2012 NFL Draft. That has made him a role model for as long as White can remember.

“He's definitely a big part of why I am who I am, and where I am today,” White said. “Everybody jokes that we look alike. He's been that big brother figure that I could follow. He laid the blueprint for me. I wanted to follow everything he did. Our stories are exactly the same.”

Claiborne, who is currently with the New York Jets, was playing a basketball tournament one year at Green Oaks while White was in middle school.

“I came down and dunked the ball twice,” Claiborne said. “I remember to this day, Shaq was sitting in the stands, going crazy. Some of the other kids there were clowning him, like ‘He’s trying to be like you.’

“I’m like, ‘What’s wrong with him wanting to be like me?' I felt like I was doing something positive. Me and him still talk about that story to this day.”

“If you know that what your friends want to do is not part of your plan, then don’t do it,” Claiborne said. “It’s not easy. You want to go out with them. It takes a strong-minded person to avoid those type of things. He’s one of those strong-minded guys who didn’t follow the pack. He wanted to go his own way.”

Claiborne was a consensus All-American in 2011, with White following in 2016. They set the example for the next Shreveport product-turned-LSU star. Greedy Williams had six interceptions and 11 passes defensed in 2017 as a redshirt freshman, both of which led the Southeastern Conference. CBS Sports ranks Williams as the 11th-best prospect for the 2019 NFL Draft, should he choose to leave school.

“I watched him grow up,” White said of Williams. "It’s crazy to think me, Mo and now Greedy all came from this area and can be first-round picks.”

“It shows we have so much talent here,” Claiborne said. “The ones who understand what they have and what they can do, those are the guys who go places. We’re showing these young kids, we come from the same place and same environment. If we can do it, you can do it.”

When Claiborne made it to the NFL, he started holding a camp in Shreveport. He would never charge a fee, because he wanted to give back. So naturally, White’s camp last weekend was free for those in attendance.

“This is what he always wanted to do,” Wilson said. “This is the part he was excited about. He wanted to make his life better so he could come back here and make the lives better of the people he grew up with. He always put the Cooper Road on the map. He always mentions his neighborhood, because this neighborhood made him. It doesn't matter what he does, every time he comes home, people show up."