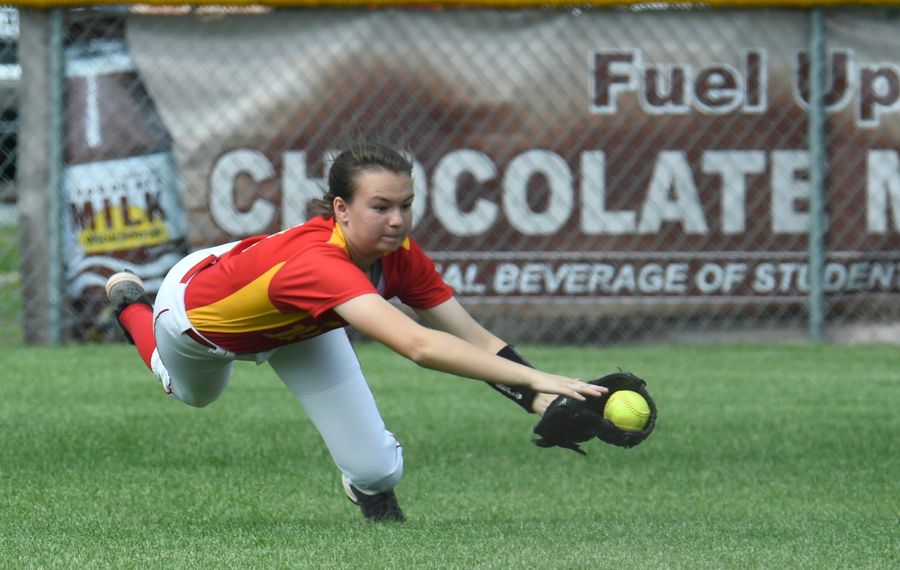 By Perry L. Novak, Special to the News

SOUTH GLENS FALLS – Olean’s softball team frequently prepares for its season with a trip south during Easter vacation. Once there, Coach Dan Brooks’ Huskies battle strong teams to be better prepared for the regular season.

That strategy paid off again in 2018 as Olean lost three games down south then returned home and wound up winning the Section VI Class B title. But all that preparation, including tough games against some of Section VI’s top large schools, was not enough to face the likes of Calista Phippen.

The Ichabod Crane senior pitched a no-hitter Saturday with 20 strikeouts in a 5-0 victory in a New York State Public High School Athletic Association semifinal at the Town of Moreau fields.

The trip to the state final four was the first for the Huskies since 2010. Crane, the Section II champion and a perennial state contender, beat Susquehanna Valley of Section IV 2-0 later Saturday for its second state title in four years.

Against Olean, the Marist-bound Phippen fanned eight of the first nine batters she faced and finished the game with 12 consecutive strikeouts. Losing pitcher Alyssa Ramarge’s lineout to right field in the third inning was the only ball hit out of the infield. Mariah Moses had a grounder to shortstop that was thrown away. Phippen’s only other blemishes were walks in the second and third innings.

Ramarge escaped a jam in the first inning then was nicked for a run in the second when Crane catcher Jenna Downey homered to right center.

Brittany Futia opened the pivotal third inning with a walk then Gabbie Cox bunted for a hit to get the Riders in position to break the game open. Phippen followed with a push bunt for a hit then Kaili Saccento singled both in. Moses tagged out Phippen when the senior tried to steal home to help end the rally, but the Section II champs added solo runs in the sixth and seventh innings.

“Win or lose, this was going to be the final (day of my career),” Ramarge said. “I’m proud of this team.”

The Eagles had three singles against the defending state player of the year, Lumberjacks pitcher Makenzie Stiles.

The trouble was Stiles and her teammates made three stellar defensive plays to escape the jam then used a two-run homer by Bryn Martin in the bottom of the third inning to take control. Deposit went on to win 5-0.

“Last year at the start of the game we were overwhelmed,” North Collins coach Jan Collins said. “This year we were more prepared."

The Eagles made it to the state semifinals in 2017 only to be drubbed in the semifinals. The return trip saw a better showing but a similar outcome.

“I think they knew what to expect this year,” Collins said.

North Collins senior pitcher Rebecca Cyrek started the game with a single and Brianna Krawczyk followed with a single. Stiles induced a grounder to get the lead runner then Deposit recorded an out off a rundown when a runner tried to advance on a ball in the dirt and ended the inning on a comebacker to the pitcher.

Cyrek was strong in the circle to start, fanning her first batter and avoiding trouble in the second to keep the game scoreless.

But Martin’s two-run homer in the third gave the defending state champs a 2-0 lead and they added three runs in the fifth inning to all but seal the victory. Two walks started the rally then Bryn Martin singled in a run. Kyra Martin followed with a sacrifice fly then Stiles had an RBI hit.

The Eagles managed just two hits against Stiles over the last six innings. She finished with 10 strikeouts.

“I want to thank my seniors, Rebecca Cyrek, Morgan Mathis, Alexa English and Brianna Krawczyk,” Collins said of the leaders who helped make the return trip to the state semifinals possible. “I’m proud of what they all did for this team and the community.”