The "v" word is not necessary.

Owners Sarah Sendlbeck and James Ernst have said their mission with Root & Bloom Cafe is to serve a completely plant-based menu that's as local and organic as possible, without processed ingredients.

They don't call the restaurant vegan, because of the preconceived notions that come with the idea of vegan food. Instead, they aim to serve good food that also happens to be vegan.

I visited for dinner on a recent Thursday night with my husband and two daughters, omnivores all. The restaurant is located in the gazebo behind Thinking Elvish Fantasy Chocolates, 423 Elmwood Ave.

Getting there is half the fun. There’s no secret knock, but it feels like there should be. We pulled on the right-hand door to Thinking Elvish, which was locked, but the left-hand door opened and we walked through the empty store, down the hallway past the restrooms and up the steps into the backyard. 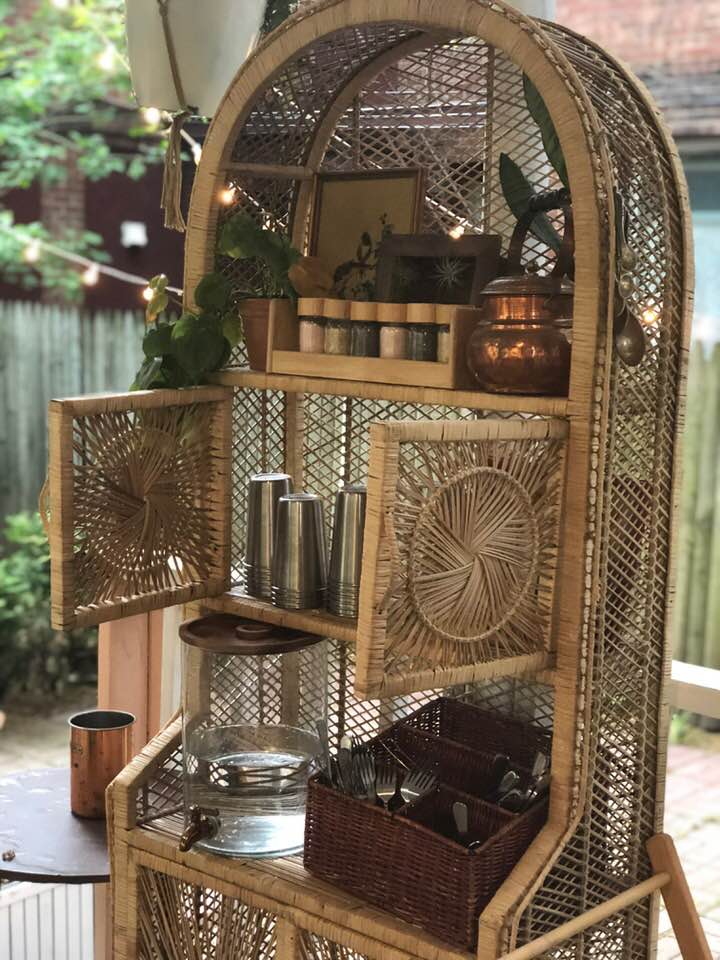 The gazebo has always been a lovely space, both when it was home to Tabree and Astoria, but in its latest gauzy incarnation, it’s downright ethereal. Rustic wooden floors, plants in white macramé hangers and twinkling lights all work together to create a breezy, coastal vibe.

At the counter at the top of the gazebo stairs, we were greeted by a friendly server who told us we could sit wherever we chose, and could come back to the desk to order after looking at the menu.

We were also directed to a wicker cupboard across the dining room where we could gather our cutlery, napkins and water from a glass dispenser.

We stuck with water to drink, except for a bottle of HempBucha ($4.95) for myself. Also on offer were La Croix ($2) or Bootleg Bucha in blueberry lavender ($3.95). Milkshakes, which were $8, came in strawberry shortcake, cookie dough and chocolate peanut butter.

For dinner, I chose the Tito ($12.50). Vegan, gluten free and soy free, it was a towering pile of house-baked corn chips with quinoa meat, pico de gallo, guacamole, pickled onions, cultured-cashew cream and cultured-cashew queso. Everyone dug into my plate and I still had some to bring home. 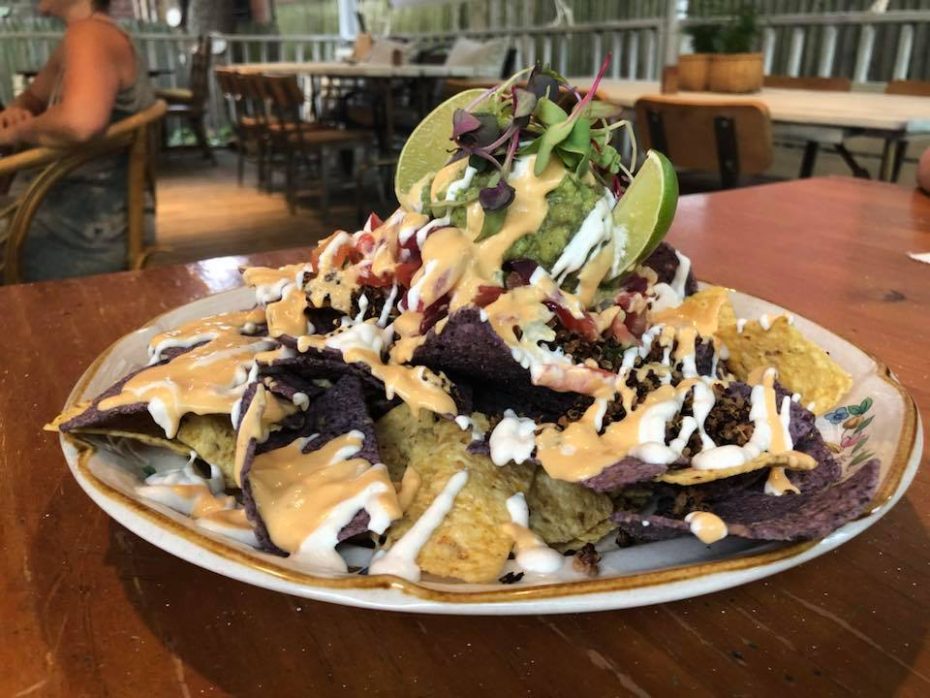 My husband opted for the Mavis ($14), three barbecue jackfruit sliders on cottage rolls, topped with pickled onions, microgreens and slaw, served on a wooden board. The Mavis is soy free and vegan. 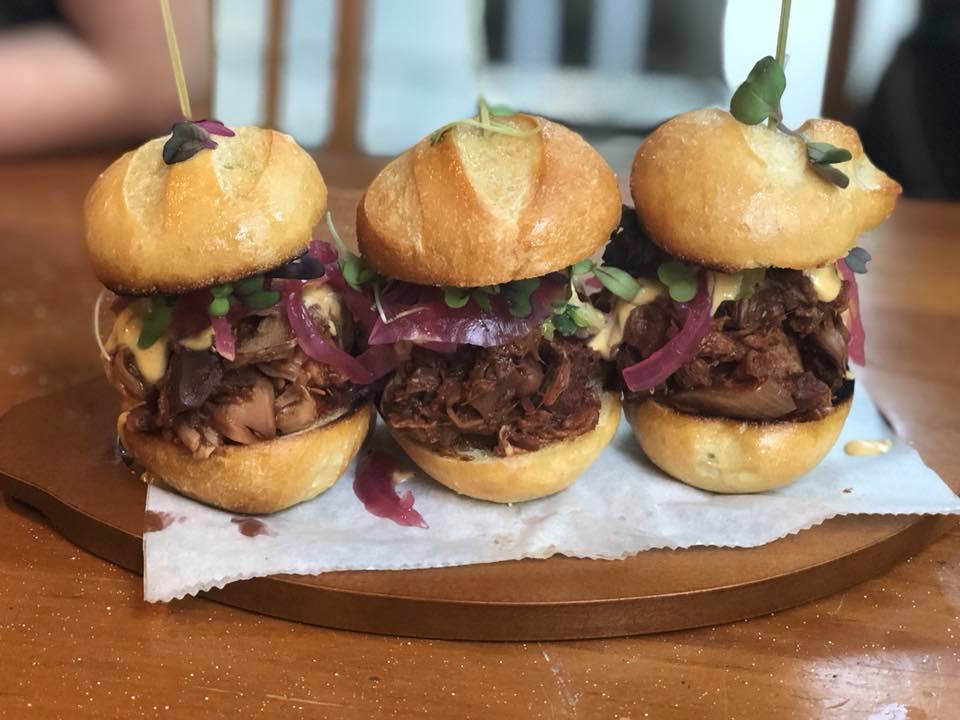 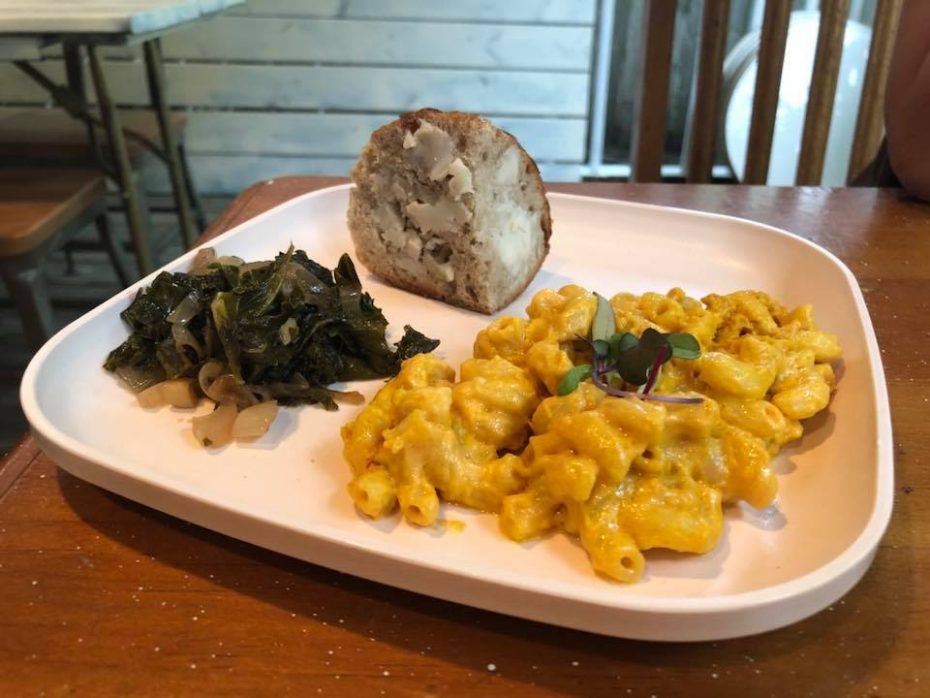 Kid friendly plates, too, such as this vegan macaroni and cheese with sauteed greens and a chunk of bread. (Samantha Christmann/Buffalo News)

We were full, but took home a giant (and truly delicious) slice of Grandma’s Chocolate Blackout Cake ($8) for later.

Overall, Root & Bloom succeeded in winning over my family of omnivores. The nachos were a real crowd pleaser, even though it was the family's first taste of quinoa meat. The macaroni and cheese didn't go over as well, with both kids turning their noses up at it, but one of two daughters devoured the meat from the jackfruit sliders, which the husband and I loved.

There were three other options available that night. The Florette ($16) was a whole roasted cauliflower covered with a Cajun rub, crisp caramelized maple syrup and coconut sugar coating with a lemon cream drizzle surrounded by a kale salad, gluten- and soy-free.

Root & Bloom also offers a popular brunch on weekends with such dishes as snickerdoodle pancakes, jalapeno cornbread waffles and house-made, cultured-cashew yogurt with granola and hemp seeds; from 10 a.m. to 3 p.m. Saturday and Sunday.

The restaurant plans to have an indoor space ready to go by fall.