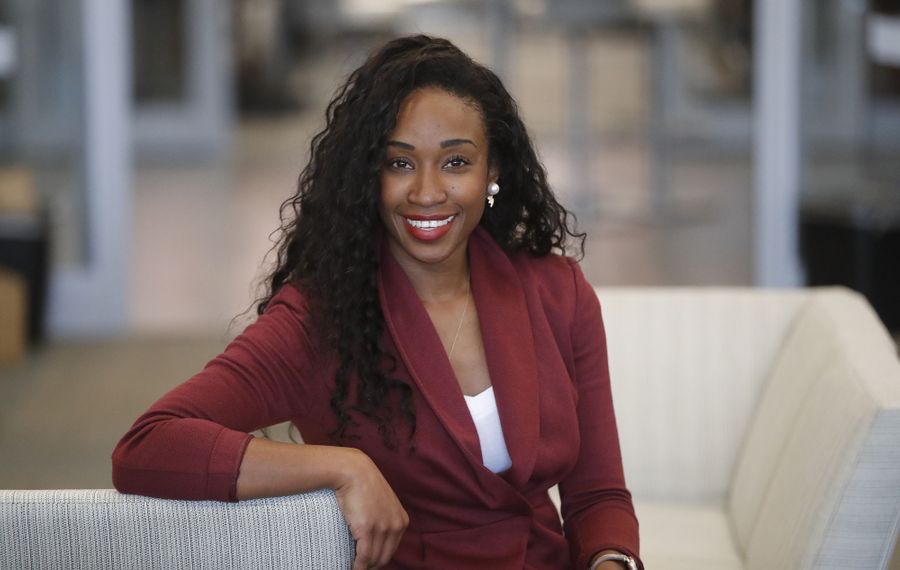 The Marksville, La., native arrived in recent months, unaccustomed to the climate but intrigued about whether the annual 43North entrepreneurial competition could help put her feminine hygiene business – which almost took the Southeastern U.S. by storm three years ago – back on track.

"At one point, I was in my warehouse and I told my assistant, 'Take everything away, all of the products. I'm going to get married, I'm going to have some children and I'm going to be a regular person,'" said Jackson, founder and president of Femi Secrets.

Jackson, a high school basketball star in her hometown, holds a bachelor's degree in biology from the University of Louisiana at Lafayette. She interned in a hospital while in college with thoughts of going on to medical school, but instead moved to Atlanta to work in promotions and marketing with the NBA Atlanta Hawks and AT&T.

She was living in the Vinings district when Genese Lavalais, a friend from back home, told her she had polycystic ovary syndrome, a hormonal condition with no known cause that produces prolonged, heavy periods. Jackson remembered the panties that nurses used in the maternity wing in Lafayette before sending new mothers home.

"All women love these panties," she said. "They feel good. They're breathable. They don't give women enough when they leave the hospital and you can't go buy them in the stores."

Jackson used that model to create an organic, disposable, biodegradable panty with a menstrual pad tightly sewn into it. She worked with a Chinese manufacturer to produce the Pretty Panty, and successfully pitched dozens of Walmart and Target stores to carry them.

As orders piled up in 2015, she ran into supply, transportation and cash-flow issues, and put her company on the back burner. Then another friend, Buffalo native Dwayne Martin, told her last year about 43North. She placed third in the competition, out of 16 entrants, and landed $500,000 and free rent for a year in 43North's Hub at the Innovation Center, on the Buffalo Niagara Medical Campus.

Jackson has spent the last five months working alongside other fledgling companies. The surroundings include a hodge-podge of tables and chairs, workstations, and computer terminals. Budding entrepreneurs brimming with ideas put their feet up on couches while they work on laptops. Some wear headphones; others do not. The dress is casual, including T-shirts and shorts. On a recent Friday, nobody wore a dress shirt or tie. 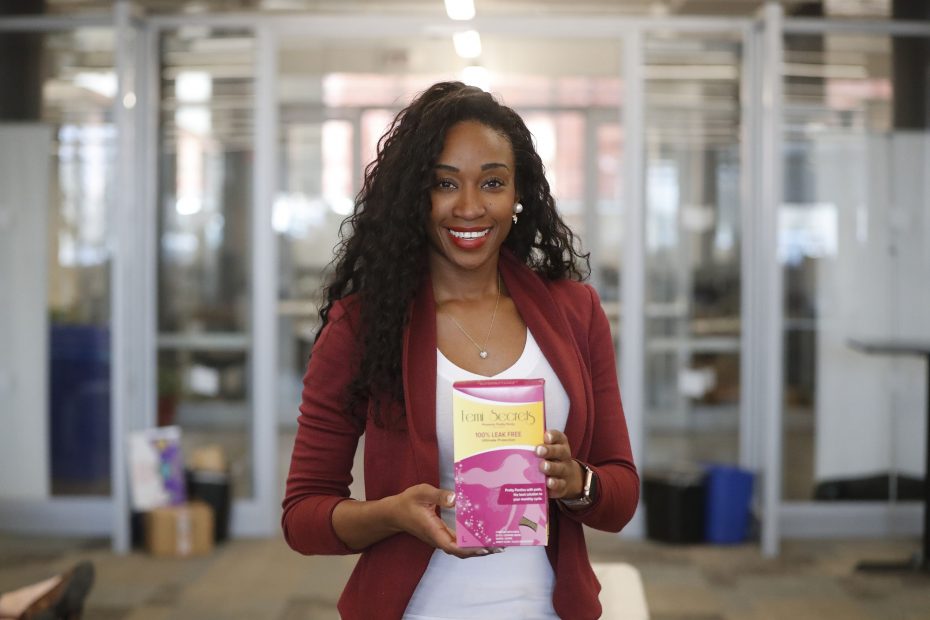 In a nutshell I said we're creating an international movement where women are no longer ashamed of their femininity. We want to open this door, create some quality, premium, healthy products to change the face of feminine hygiene. Here's a big health issue – and it's taboo. We can't talk about it. Three of the judges who were women came up to me afterward and said, "We love what you're doing. We want to be partners. We want to hear more." The support I got was excellent.

Another part of the pitch was "Buffalo needs us and we need Buffalo."

Q: As part of this process, you moved to Buffalo. What's that been like?

They tricked us. The competition was in October. It was cool, I had my toes out and had a light sweater. I moved here Jan. 3. I flew in, in a blizzard. I couldn't even land in Buffalo. I had to land in Rochester and Uber here. We were stuck on the interstate for seven hours when we had that big pileup. ... I was in the Uber vehicle with one of the northeast presidents of the U.S. Postal Service, and we've had a meeting with them so they can give us some great rates for our online subscriptions! Our goal is to one day ship 20,000 packets a month. Even out of that trip, I was able to get a partnership. She was a woman, as well.

It's a culture shock coming from Atlanta, where everything is fast-paced and I can get everything at the snap of a finger. Here, it's slower. I'm a Southern girl, but that's different as well. But I knew Buffalo would be great for me, even with the snow. I have a goal to accomplish. All I'm going to do is work, work, work.

Q: What are your big plans?

One of the main things I want to do here is open our own manufacturing facility because I want to control the input and the output. I want to literally see that all our products are made chemical-free. I want to provide products to women in the next 10 years who can say, "When I started using Femi Secrets products, I stopped having fibroids, I stopped having issues, my cycle got lighter."

Q: Talk about your signature product, the Pretty Panty. What are its biggest selling points? 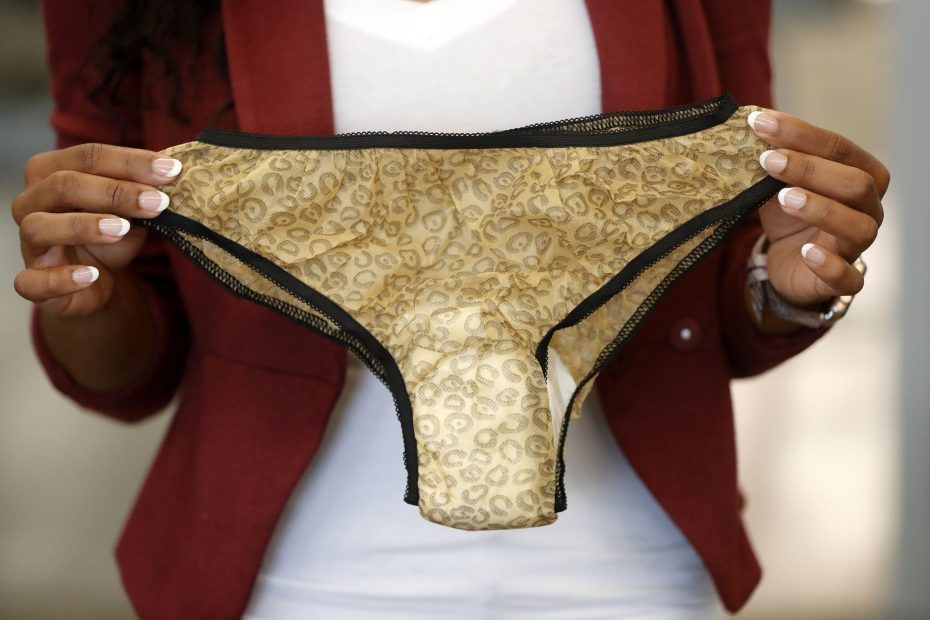 The dimensions of the Pretty Panty are different than regular panties and are patented. (Mark Mulville/Buffalo News)

Me and my friend wanted a product that not only solves the leakage problem but makes a woman feel good and feel comfortable. We also wanted to make it a health asset. It's called Pretty Panty because it looks just like a regular panty, with leopard print. The pads are all cotton and organic. ... The dimensions are different than regular panties and are patented. The panty is wider at the bottom and locks into a woman's body, so it doesn't shift. The panty is breathable, which allows for dryness and airflow. That helps make it odor-free. It's also extremely convenient. Once it's done, you throw it away. You look in the trash and all you see is a pretty leopard print.

Q: Are you planning to develop related products?

We'll have some in breastfeeding. That will be one of our groundbreaking products. Under our feminine hygiene products, we have a slew that will be coming out. We'll have our own pads, our own liners, our own wipes, our own suppositories.

Q: What will be the challenge of manufacturing in the U.S.?

Labor costs. But over the last couple of years, those have increased in China, as well. One of our partnerships we're going to make here is with Manufacturing Works. They're part of the Buffalo Billion, which we are a part of, too. They're funded to help companies like us create technology. We've partnered with them to secure an automated system that can make our products quicker. If we can put an automated system here, that will make us a front-runner.

The first part is hiring, building a team, the infrastructure. Also to create inventory. We're rolling out our subscription program in July, which should be a major revenue push. Each month, a woman will receive a Femi Secrets care package. It will include our premiere product, Pretty Panty, our pads. Everything a woman needs for her monthly cycle will be in that box. The company in China will still be manufacturing for us but we'll also be looking to partner with others as we ramp up sales. We don't yet have the retail subscription price. We have a website, femisecrets.com, that we will update. We're going to be driving sales in that direction. (A 10-pack, with pads, is now listed at for $8.99, a 5-pack with pads for $4.99, but not yet available to order.)

Q: Many other 43North winners have left Buffalo after their award period ends. Can you see yourself staying longer term?

We're contracted for a year to be here. I've told my project manager that I've already planned to be here for at least three years. Who knows, I could settle here and start my little family. I like it here.