Some people really do call it "The Catch."

But then quite a few sports fans would argue that's "tosh." They'd talk about David Tyree pulling in "the helmet catch" of a ball thrown by the Giants' Eli Manning in the Super Bowl.

Some would argue that San Francisco's Dwight Clark in 1981 is as entitled as any football player to have made something called "The Catch." Or that the Pittsburgh Steelers' Lynn Swann takes precedence for his amazing catch in Super Bowl X in 1975.

On Monday Night Football, the Giants were playing their hated rival the Dallas Cowboys, a hard-feelings contest if ever there was one (or at least it is among those of us who are most definitely not Cowboys lovers). On one crucial play, Manning throws to his rookie receiver who is having a sensational first year.

Beckham somehow manages to catch the ball with three gloved fingers of his right hand even though the Cowboys' Brandon Carr is called for pass interference.

When Beckham catches the ball, his body -- caught in slo-mo -- can be seen in a near-miraculous balletic horizontal line parallel to the ground. It seems beyond both ballet and gymnastics.

Ardent and well-informed football fans will say, "Yeah, yeah, yeah, they all practice that." And, of course, they're right. Which doesn't change the fact that when you're watching in real time, it seems as if you're watching something miraculous.

Or, at the very least, something legitimately "beautiful."

I'm having a discussion with News Arts Editor Terry Doran. He's an amateur basketball player (The Buffalo News team is called The News Blues) who's also an ardent and info-steeped pro basketball fan. Doran, as so many sports fans are, was a take-no-prisoners sort of observer of the subject. In his era of fandom, the perceived rivalry between Laker Wilt Chamberlain and Celtic Bill Russell wasn't just a matter of sport, it was a moral exemplar to be memorialized in legend and literature and philosophy.

To him, Russell -- defensive wizard, coach and remorselessly candid basketball color man on TV -- was the great basketball player of his time. I'd never argue that Wilt Chamberlain should have been that, but it seemed to me that any one player who could rack up 100 points in a single game was, at the very least, a truly immortal side show attraction.

What I was trying to sell to Doran about his much-hated Los Angeles Lakers was how genuinely beautiful it was to watch the Lakers on a fast break passing to each other in geometric patterns that were rare in nature. What James Worthy, Magic Johnson, Byron Scott and Michael Cooper did at top speed was truly beautiful to watch.

Doran didn't completely agree. But what occurred to him is that I ought to do a Gusto piece saying all that. And more important he felt that we needed to get The News' great sports editor and columnist Larry Felser to contribute to it.

I was dubious. "Do you think Larry would do it? I can't imagine it."

There was only one way to find out. So I strolled across The News' editorial department and asked him. Not only was Larry willing to do it, he was positively thrilled to have been asked. (Larry, to put it succinctly, was wayyyyy cool.) 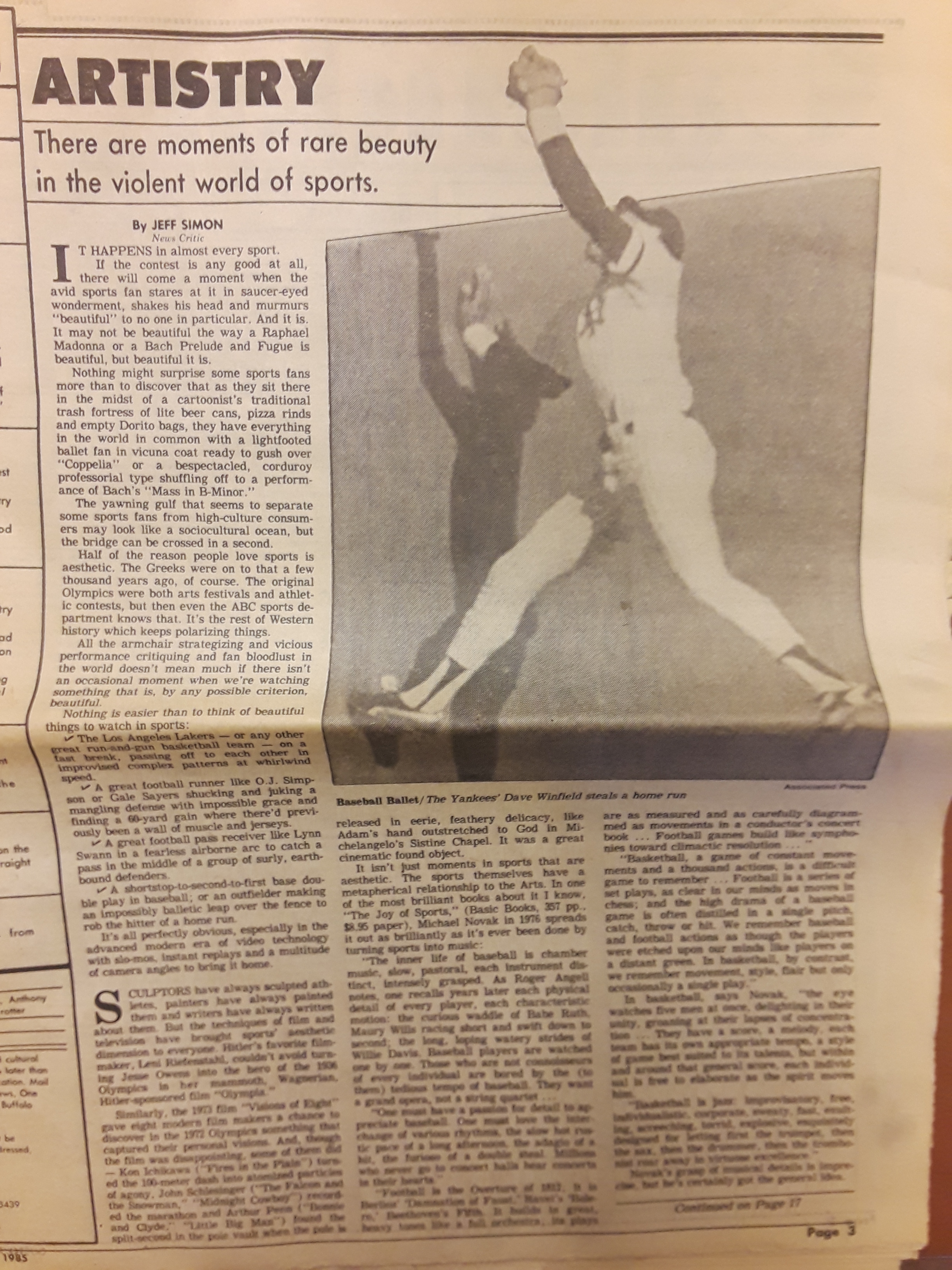 "It happens in every sport. If the contest is any good at all, there will come a moment when the avid sports fan stares at it in saucer-eyed wonderment, shakes his (or her) head and murmurs 'beautiful' to no one in particular. ... The yawning gulf that seems to separate some sports fans from high-culture consumers may look like a socio-cultural ocean but the bridge can be crossed in a second."

So here is how Felser, one of the all-time greatest sports columnists in Buffalo history, crossed that ocean and created a "Gallery of Great Works by Some of the Old Masters" of sports in 1985:

"Maurice Richard: Can a beast of prey become of thing of beauty at the point of the kill? If that is possible, then Richard on the prowl was a thing of beauty.

"Wayne Gretzky, as he approaches the opponent's net, sometimes resembles a barn swallow, swooping and gliding toward a goal. Richard was a leopard, coiled to spring at his prey.

"During the '50's, Richard suffered a broken ankle, which can be a career-ending injury for a hockey player. The major worry in the province of Quebec was whether Richard could make a comeback. After a lengthy recovery period, Richard returned in a game against the hated Maple Leafs in Toronto. ... As he left the Montreal bench for his first shift on the ice, the puck was being moved into the Toronto end. Richard reacted almost by instinct. In two strides, he was in front of the Toronto goal keeper and in possession of the puck. Instantly, the weight of his body was leaned into his shot and the puck went by the goalie. It was a moment of predatory elegance."

"Joe DiMaggio: When he made a difficult catch, there was no visible effort, no stretching or tumbling. It was like watching a Gary Cooper film or George Sanders wearing a tuxedo. A DiMaggio home run was an exercise in grace and dignity which couldn't be copied."

"Bob Cousy: There are some words which are put to almost scandalous misuse on the sports pages. One of them is 'deft.' The word 'deft' should be reserved only for athletes who can handle a ball in the manner of Bob Cousy. 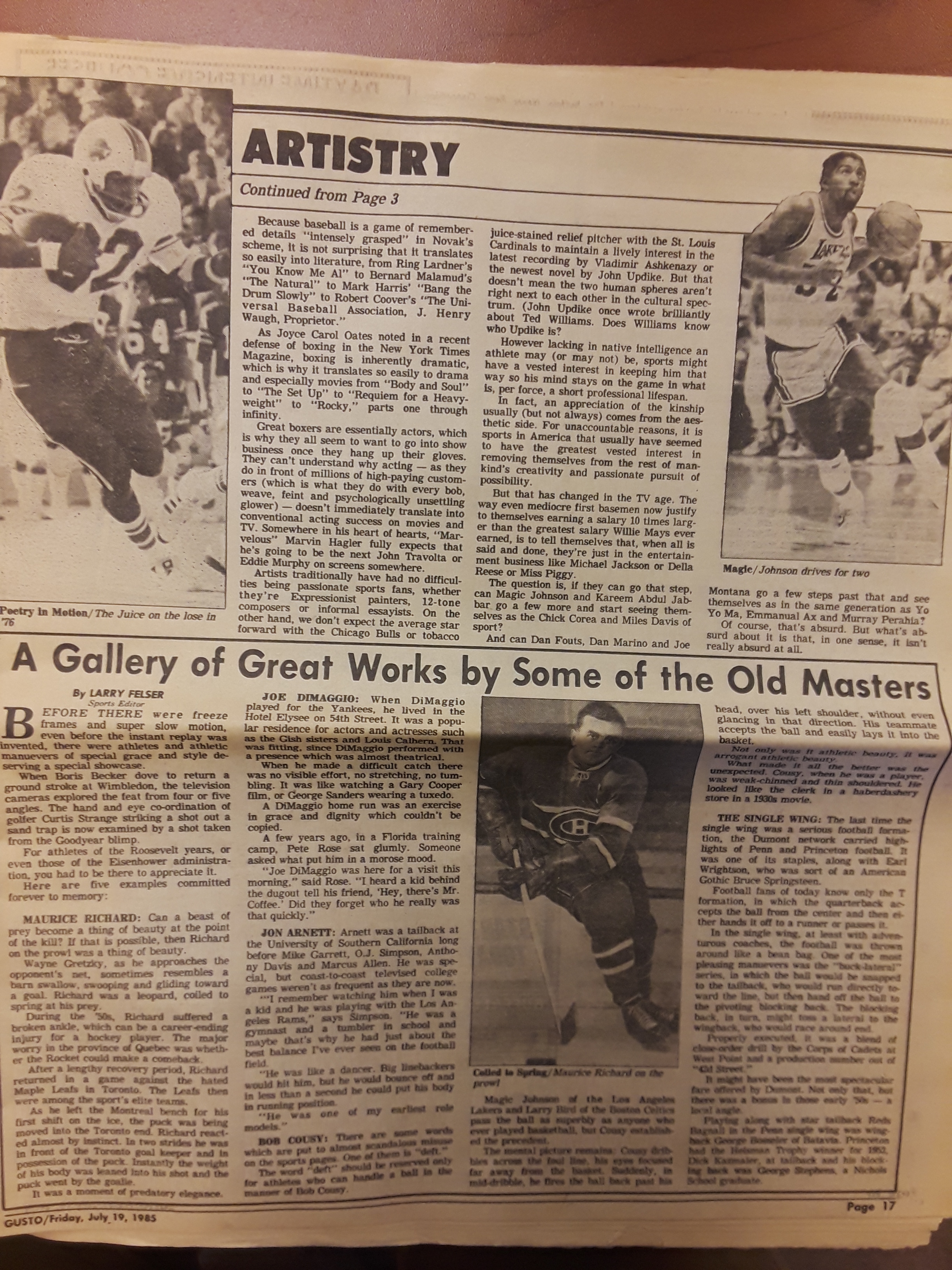 "Magic Johnson of the Los Angeles Lakers and Larry Bird of the Boston Celtics pass the ball as superbly as anyone who ever played basketball but Cousy established the precedent.

"The mental picture remains: Cousy dribbling across the foul line, his eyes focused far away from the basket. Suddenly, in mid-dribble, he fires the ball back past his head, over his left shoulder, without even glancing in that direction. His teammate accepts the ball and easily lays it into the basket. Not only was it athletic beauty, it was arrogant athletic beauty.

"What made it all the better was the unexpected. Cousy, when he was a player, was weak-chinned and weak-shouldered. He looked like the clerk in a haberdashery store in a 1930's movie."

All that was left after Larry and I was a cover for our combined contributions in Gusto. What resulted was close to the kind of miracle we were both writing about. Former News artist Laura Rankin described the terrific resultant illustration--drawn from Michelangelo's famous creation of Adam on the Sistine Chapel-- recently thus:

"I think God was handing Adam a basketball and the African American Adam had on a Celtic Uniform... What I do remember is the usual M.O. for creating Gusto Covers on stories: Terry Doran would give me the theme of the cover story, in this case 'Sports and the Arts.' Usually I had to come up with an image without any story content. So I must have decided to use a very recognizable piece of art and incorporate an athlete into an image since I probably never saw  a story."

It was, then, merely a News artist performing the kind of everyday professional magic that Larry's and my pieces were about.

It couldn't possibly have elevated what we did any more than it did.