The Village of Williamsville had a short window to restore a dozen tall windows.

The historic stained glass windows in the village-owned Meeting House, a former church on Main Street, were removed and transported to Chicago for restoration over a five-week period that ended last month, hours before a wedding was to be held there.

"I'm shocked about the five-week turnaround because we've talked about this project for years," said Village Trustee Deb Rogers. "We thought, 'This is the time. We need to strike while the iron is hot.' "

Emily Carlson, owner of Solstice Stained Glass of Chicago, had a five-week window of availability that coincided with a period when no major events were booked at the Meeting House. Carlson happened to hear about the proposed restoration in Williamsville earlier this year while working on a separate project for Temple Beth Tzedek in Amherst.

The arched windows, each of which have four of five separate panels, were deteriorating and sagging at the bottom, in some cases under their own weight. To remove the windows, Carlson's approach was to use a technique called "unzipping," which involves pulling away the lead caming to remove each piece of glass individually.

"It's a gentle, slow process," Carlson said. "We effectively disassembled them in place."

Once boxed up or in crates, the windows were taken to her studio where they were documented further and cleaned. She said the windows were not as dirty as others she had encountered in Chicago, where windows can become coated with an oily sheen from industrial pollution and acid rain. A protective glazing helped conserve the Williamsville windows, she said. 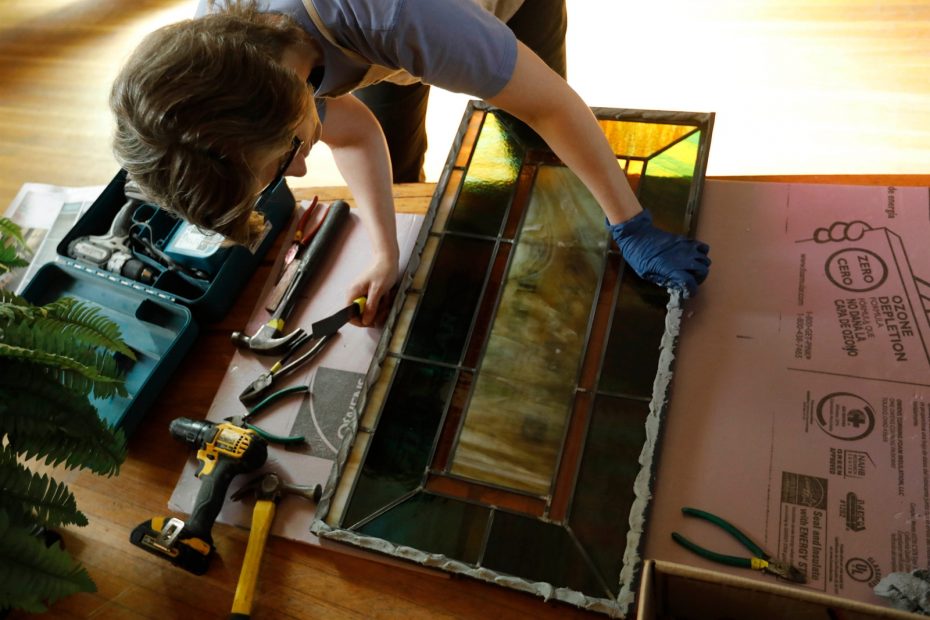 Emily Carlson, owner of Solstice Art Source, puts the final glazing on the memorial window as she prepares to install it at The Meeting House. (Derek Gee/Buffalo News)

She used an archival epoxy to glue together some broken pieces, in an attempt to retain as much of the original glass as possible. To Carlson, any imperfections aren't imperfections at all, but rather tell the story of the red brick Meeting House, which was dedicated in 1871 by the evangelical congregation Society for the Disciples of Christ.

"That's all about the story of the window. There has been work. There have been replacements, some better than others. The windows are not perfect, there were breaks in them." 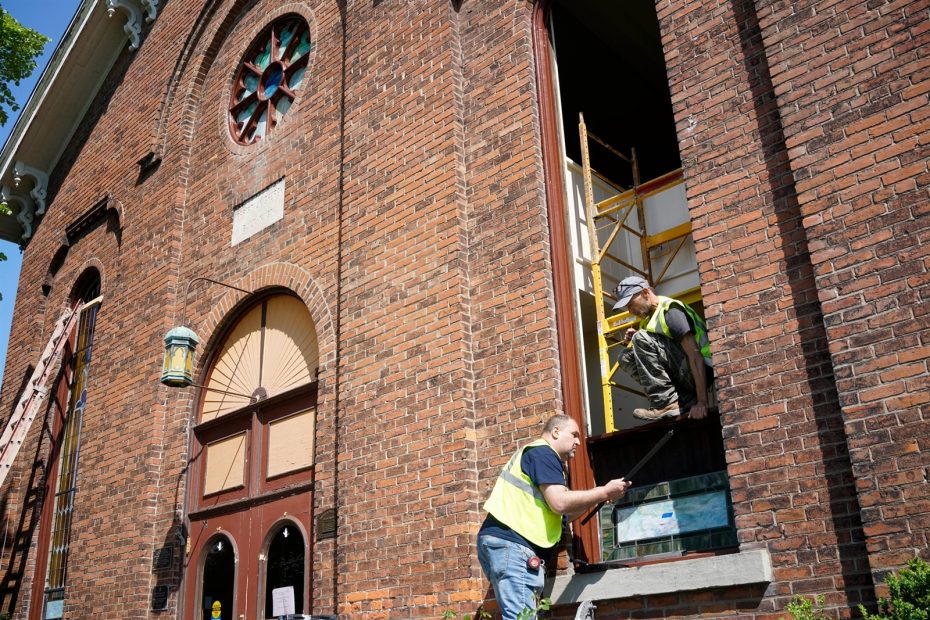 Federal preservation guidelines had to be followed because the building is listed on the National Register of Historic Places. The Flynn Battaglia firm was brought in to survey the windows' condition and identify appropriate stabilization and preservation methods.

"The best preservation is keeping as much of the original material as you can," said architect Courtney Creenan-Chorley. "That's what we set out to do initially with all the lead caming. We were trying to save about 50 percent of the original. But once the contractors came in and started pulling the windows out it was clear that the internal lead had failed significantly. That's something you only see once you get into the construction of things. But we were able to save almost all of the glass. Really that's the main character-defining feature of an art glass window, the actual glass panes themselves."

The windows were pieced back together, "like a jigsaw puzzle," and a weather proofing was applied, said Carlson.

In windows of St. Ambrose, an eye-opening experience

The windows, which feature center medallions of stars, a Bible, torch, anchor, crown and Alpha Omega symbol returned to Williamsville on May 21. By Friday the original stenciled glass, pebble glass and newer leaded glass windows were casting hues of amber, green and blue from the brilliant sunshine outdoors. 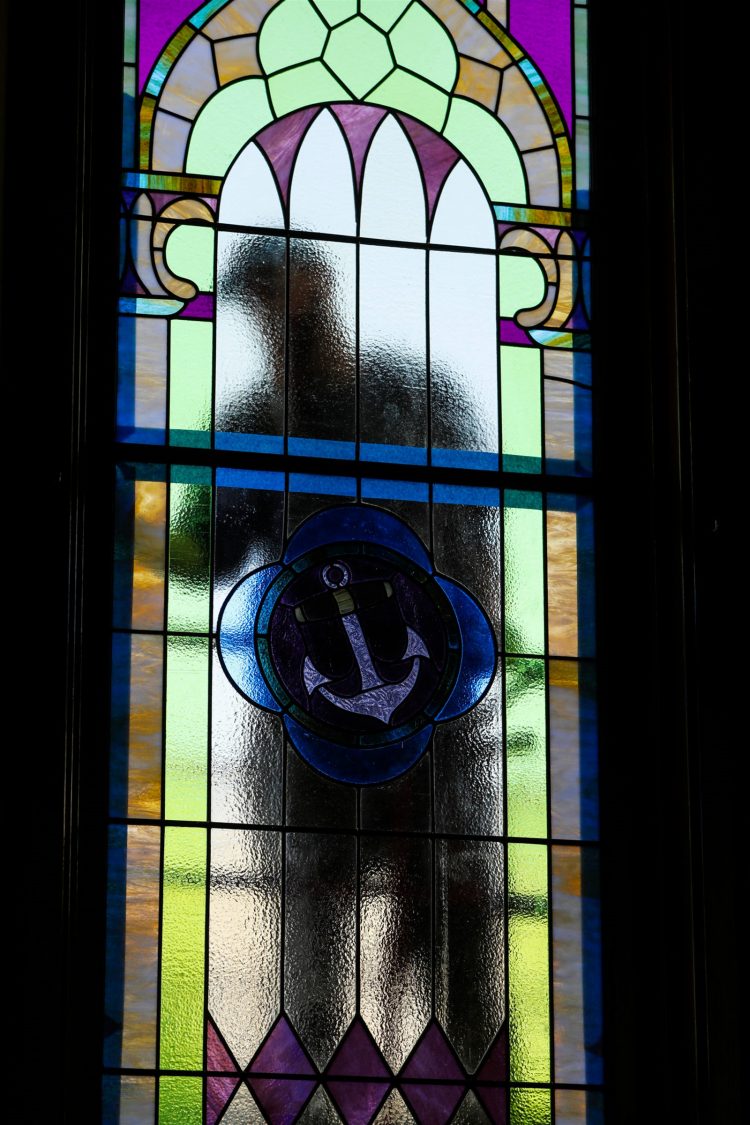 Nicholas Juhasz casts a shadow as he puts final glazing on a window. (Derek Gee/Buffalo News)

"The glass is very clean so you see all the colors, all the opalescence," Josh Jensen, vice president of Jens Glass in Hamburg, the general contractor on the project. "But then the fact that they're all re-camed, they're so crisp. All the lines are crisp and defined. A lot of them had a pretty good belly to them."

Jensen's company restored the wood on the four double-hung sash windows and the perimeter wood frames on the eight art, or stained, glass windows. Flynn Battaglia did a paint analysis of the existing wood window sash to determine the original colors. The finished color, a reddish-brown, is a match to the earliest found layer of paint on the windows.

To village officials, the window restoration is the latest effort to make the building more viable and attractive to those who would rent it for events such as weddings, concerts and plays. Other recent improvements include repointing of exterior brick, a new roof and HVAC updates, said Lynda Juul, village administrator.

"This whole time we've been watching the windows, knowing the windows are a big project we're going to have to take care of," she said. "We certainly didn't want to get to the point where something would happen to one of the windows and it would be damaged."

The village applied about $80,000 of Community Development Block Grant funds to the overall final price tag, which is expected to total $125,000 and will include vented storm windows, some glass replacement and some painting.

To Rogers, the village trustee who served as chair of the village's Meeting House committee, the restored windows enhance the setting's ambiance and charm. Back in 1871, the windows' glass was machine-rolled to a 1/8" thickness, carved and puzzled together.

"To think, in 1871 those windows were created and here we are in 2018 and we're still lucky to have them," she said. "The goal was to restore them so for another 75 years these windows will be enjoyed." 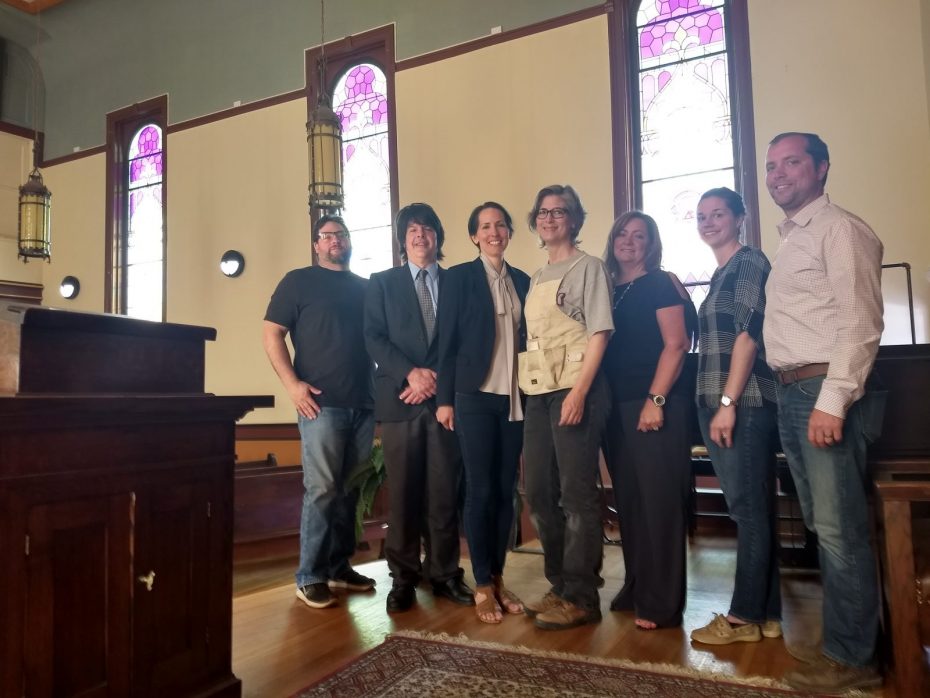