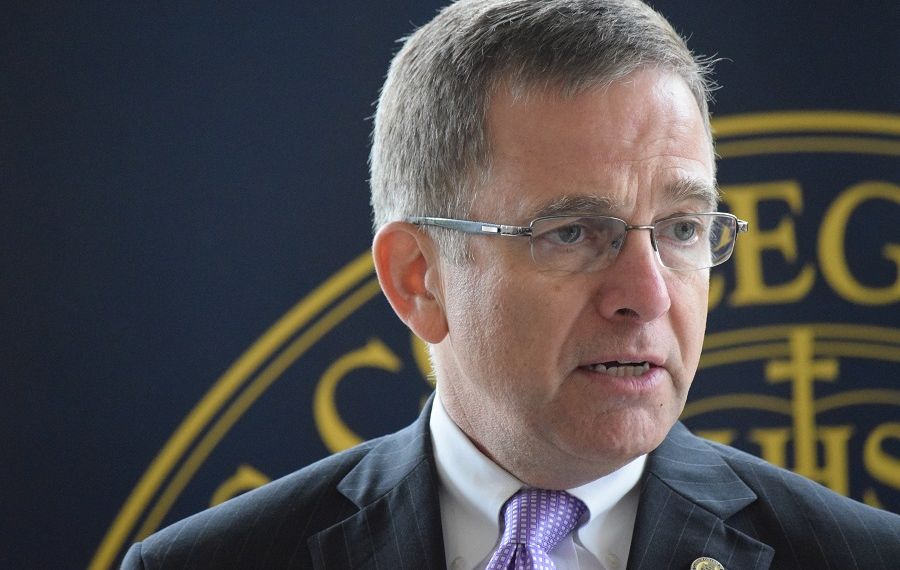 For years, Canisius College aggressively expanded its campus to address a student housing shortage in the early 2000s.

But there's a problem. With undergraduate enrollment shrinking, Canisius now has too much space.

“We built a lot of things, and now we’re trying to get to that ‘sweet spot’ in-between,” said John Hurley, Canisius’ president, after a news conference at the Delavan Townhouses student housing complex on Wednesday morning.

A new agreement, though, will allow up to 65 Erie Community College students to stay in private Canisius College rooms on Delevan Avenue next academic year. The deal, Hurley said, is a logical step forward as Canisius works to address its declining enrollment.

Canisius will lease space to Erie Community College students at the complex starting this fall. Dan Hocoy, ECC’s president, on Wednesday said there’s a demand for housing among international ECC students and athletes. The current leasing agreement between Canisius and ECC lasts until the end of the upcoming academic year, he said.

“In following years, we’d like to expand,” Hocoy said of housing more students at Delavan. The agreement could be extended if both colleges agree. The ECC president said there were other private colleges that “had space,” but ECC opted to partner with Canisius because of the two institutions’ shared values.

The Delavan property is just over 12 acres in size, Erie County records show. Hurley said Delavan has 350 beds and offers four- and five-person suites. Under the ECC leasing agreement, about 18 percent of the facility could be filled with ECC students next year.

Canisius currently has about 2,200 undergraduates, Hurley said. According to the college, the average class size is 17 students, and there are no enrollment upticks in sight, the president said.

“(We’ve) invested a lot in facilities and other assets, and you have to figure out, ‘How can we use those more effectively?’” Hurley said. “I don’t think it makes sense for ECC to be building housing, if there’s something acceptable nearby.”

Hurley said there are different buildings off Canisius’ primary campus the college has been selling to “shrink back to the main footprint.” According to the college, Canisius has more than 30 buildings in Buffalo across about 70 acres, in total. In the Delavan case, Hurley said, it’s beneficial to fill space with other college students instead of leasing rooms to local residents.

He said one recent housing project near SUNY Buffalo State's campus was opened to both students and residents, creating “a mess.”

“You can’t control your destiny when that happens,” Hurley said.

Hocoy said the agreement is a bit of an experiment and hopes to address ECC’s lack of student housing accommodations. The president said many students in Erie County opt to attend community college in Niagara County because NCCC offers residential options.

Students are seeking a more “true” college experience, Hocoy said. The Delavan contract provides ECC students with meal plans and access to Canisius facilities, and the community college is planning to add a shuttle stop at Canisius for ECC students living at Delavan.

“I think this is a huge opportunity,” Hocoy said during the news conference. The agreement could encourage students to stay in Erie County, the president said.

This is the second private-public partnership forged between the two schools since April, when Canisius and ECC officials signed an agreement to develop a dual enrollment program. That program, which takes effect next year, allows ECC students to simultaneously take Canisius classes, Hocoy said.