The longtime ESPN sportscaster is a Bills fan, after all.

On Tuesday, Berman will get behind another – the BFLO Hall of Fame Experience, which calls for the creation of a museum featuring three local halls of fame dedicated to sports, music and broadcasting. Proponents have worked on the project since 2010, but with only $70,000 raised so far, they remain far from the estimated $25 million to $30 million they say is needed to make the concept a reality.

Berman, who will be in town Sunday and Monday for the annual Jim Kelly Celebrity Classic golf tournament, was asked to stay over an extra day to headline a fundraiser at Adam's Mark hotel by longtime friend Therese Forton-Barnes, the group's vice president.

"A light bulb went off when she spoke about it," Berman said of the museum concept. "I love Buffalo and it sounds like a wonderful idea, a new attraction that, if it gets off the ground, could give visitors to Niagara Falls another reason to visit Buffalo. I think Buffalo is on its way back, and this could fit right in with that mode."

Last year, Berman came to Buffalo for the Kelly golf tournament with a heavy heart.

It was one of the first places he visited after Katherine Berman, his wife of 33 years, died in a car accident the month before.

"Perfect strangers, including the people who prepared the food, stopped me and said they were praying for me," Berman said. "What more could you ask than that? It was very notable that it was in Buffalo. I don't know that would happen anywhere else."

Berman was a fan of the American Football League, which included the Bills, when he was growing up.

But his firsthand affection for the team and the city really began in 1988. An anchor for ESPN's "SportsCenter" since 1979, he also was the host of the network's "Sunday NFL Countdown" program from 1985 to 2016.

"The Bills were the last of the dozen or so teams I went to visit that year in training camp," Berman said. "They were coming off a .500 season (actually, 7-8) and weren't predicted to do anything.

"What I saw was that those guys are good," he said. "Jim Kelly is pretty good, Bruce Smith we know is good. This Andre Reed looks good and Thurman Thomas, etc. I ended up picking them to be in the Super Bowl, and needless to say they almost got there." 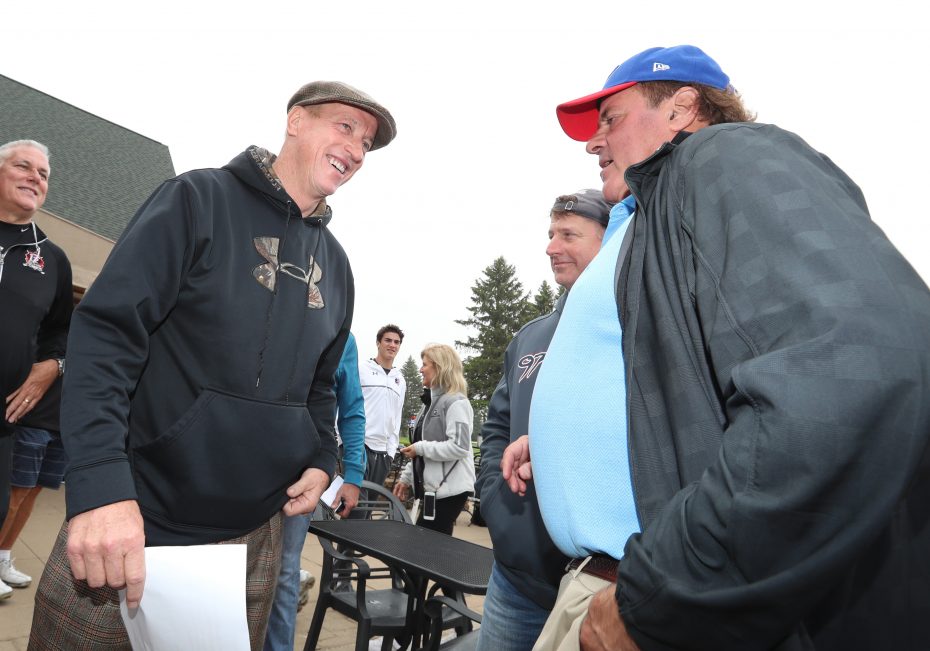 The Bills started off 11-1 that season, and made it to the AFC championship game before losing to Cincinnati, 21-10.

"I was trumpeting them every week," Berman said. "It became kind of a love story as time has gone on.

"Nationally, the city never got a fair shake," he said. "You now, snow jokes in June. By the end of the season, I think I had a key to the city."

Berman became personal friends with a number of people from the team who continue to be good friends to this day.

Chris Berman taps into friendships with Kelly and Bruce that go back, back, back

Since then, Berman said he seems to bump into Buffalonians wherever he goes in the country.

"I can be anywhere and someone from Buffalo or Western New York stops me and thanks me for supporting the Bills," Berman said. "It's like someone who went to your alma mater. Maybe it's because of the size of Buffalo.

"It's warmed my heart to this day when people stop me and say, 'Hey, what do you think about the Bills?' It's a nice conversation with a perfect stranger, and all because I happened to pick the Bills out of nowhere in '88, and they made me look good."

Berman, who also goes by the nicknames "Boomer" and "The Swami," was chosen by late Bills owner Ralph C. Wilson Jr. in 2009 to induct him into the Pro Football Hall of Fame.

"He asked me, and I was shocked," Berman said.

The broadcaster, whose well-known catchphrases include, "No one circles the wagons like the Buffalo Bills," was asked if the Bills are his favorite team.

"There's no team ahead of them, that's for sure," Berman said.

Berman guesses he's been to Buffalo "probably 50 times" over the past 30 years.

Tickets are $75, and can be purchased at www.bfloexperience.org/buy-tickets.