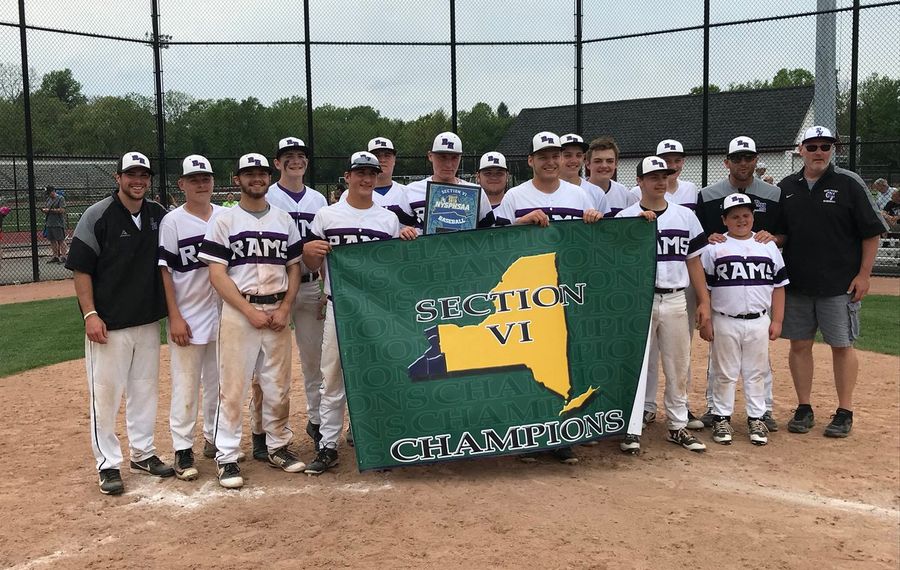 Roy-Hart began laying the groundwork for its baseball team’s success in 2016 when the program, not exactly known for its prowess in the sport, won the first of what’s become three consecutive Niagara-Orleans League regular season titles.

Since winter practices, first-year head coach Mike Tarnowski said the team set a goal to repeat as league champions but began to push harder and expect more. A disappointing loss to Fredonia in last year’s Class B-2 final only left the team hungrier to get back and this time, win, Tarnowski said.

After making school history Thursday night with a program-first sectional title, the Class B-2 champion Rams reached an even loftier feat Saturday in the overall Class B final, knocking off offensive juggernaut and last year’s Class A champion Olean.

The Rams (18-2) scored in every inning but one, pounded out 12 hits and received a gutsy three-plus innings from reliever Jacob Bruning to earn the 12-9 win at Orchard Park.

Roy-Hart makes its first trip to Far West Regionals on Saturday in Rochester.

“This team had a different feel this year,” said Tarnowski, who served as a varsity assistant last season under Jeff Ziemecki, who’s now with Niagara County Community College. “It’s not a bunch of cliques or individuals; it’s one team. Jeff did an amazing job at setting that precedent of where this program should be. It wasn’t hard pulling these guys together. They battle for each other and play for each other. I think that’s what the difference is.”

Jacob Bruning, who came on in relief in the fourth of his brother, junior starting pitcher Charlie Bruning, got Roy-Hart out of trouble by recording the last two outs in the inning. He allowed Olean to score two runs in the fifth and one in the sixth, which cut Roy-Hart’s lead to 11-9, but up three in the seventh, he was able to close the door, inducing a double-play grounder after he walked the leadoff hitter.

Tarnowski credited the hurler for his resiliency, adding “(Jacob) wants the ball and he wants it in pressure situations. I’m so happy he’s on our team.”

“Olean is a really good hitting team so I was trying to hit my spots and I did, and we executed real well and put the ball in play (at the plate) - the recipe for winning,” said Jacob Bruning, a senior who threw four scoreless innings in relief two days prior in Roy-Hart’s Class B-2 final win. “We had confidence because we knew we were similar teams; we just had to outhit them to beat them.”

That they did as all but one Rams’ starter finished with at least a hit, led by Noah Hardy, who finished 2-for-4, including a double, with three RBI, and Walker Samanca, who went 2 for 3 with three runs scored.  Roy-Hart received two RBIs each from Charlie Bruning (two hits, including a double), Ben Schwab (two hits) and Al Xapsos and two runs scored from Jacob Bruning, who also doubled.

The Rams built a 10-3 lead by the middle of the fourth inning by putting up one in the first, four in the second, two in the third and three in the fourth. The Rams notched a single run in the fifth, and with Olean rallying got a crucial insurance run in the seventh.

The offense started to get it going again in the fourth with three runs, but the team couldn’t do any more damage with two on base and one out in the inning.

August Brainard-Brunelle doubled three times and finished with two RBIs to lead Olean, which had six extra base hits.