Gravel, sand and silt dredged from the bottom of the Buffalo River were once so toxic they had to be hauled off to a special site.

But now, after a $75 million cleanup, sediment coming out of the river is healthy enough to be used to build a new habitat for fish, shorebirds, turtles and other aquatic wildlife on Buffalo's Unity Island.

The first-of-its-kind project is being watched by scientists and engineers. It's the first time dredged material will be used in a restoration project in the Great Lakes, said Andrew Hannes, a senior ecologist at the U.S. Army Corps of Engineers.

“The eyes of all the Great Lakes are on us right now," said Sheila Hint, the project’s manager.

Over the next month, the sediment will be dumped into a lifeless 20-foot deep pond on the northern end of Unity Island. When the work is done, the pond will not be any deeper than 6 feet. About half of the site will be above water, with a shoreline wetland of native pond weeds and grasses.

“In the next two to three years, it will resemble a coastal wetland habitat,” Hannes said.

Just a few years ago, using dredgings from the Buffalo River like this would have seemed unimaginable.

From poisonous to reusable

The sediment providing the wetland's foundation comes from the bottom of the Buffalo River, from the upper part of its navigation channel near South Park Avenue.

The 6.2 mile-stretch between Canalside and Old Bailey Woods once contained some of the river’s most poisonous industrial pollution.

Earlier this decade, crews removed about 1 million cubic yards of contaminated material during a roughly $75 million cleanup. Now, some of the river’s sediment is clean enough to reuse as fill in environmental restoration projects.

It’s the type of project organizations like Buffalo Niagara Waterkeeper envisioned when pressing federal and state agencies for the river’s cleanup and restoration.

Jill Jedlicka, executive director of Buffalo Niagara Waterkeeper, said the remediation of the Buffalo River was carefully planned to allow for the newly deposited sediment to be reused.

“Rather than dredging and placing these materials in the open lake or a disposal facility, we have long encouraged the beneficial reuse of the cleaner material to help rebuild and restore aquatic or wetland habitat that’s been lost,” Jedlicka said.

Over the last century, more than 60 percent of the river’s wetlands and aquatic habitat was altered or destroyed.

Earlier this month, a clamshell bucket moved the first scoopfuls of coarse silt from a flat-bottomed boat at the mouth of the Black Rock Channel into the pond at Unity Island.

The sediment – enough to fill nearly 17 Olympic-sized swimming pools – will be packed into the pond as part of the $2.9 million project.

It’ll force out pond water through stones into the nearby Niagara River and become the foundation for five restored acres of prime shoreline habitat.

Over the summer, crews will construct what’s called a “hemi-marsh” – a shoreline wetland of native pond weeds and grasses above and below shallow water. 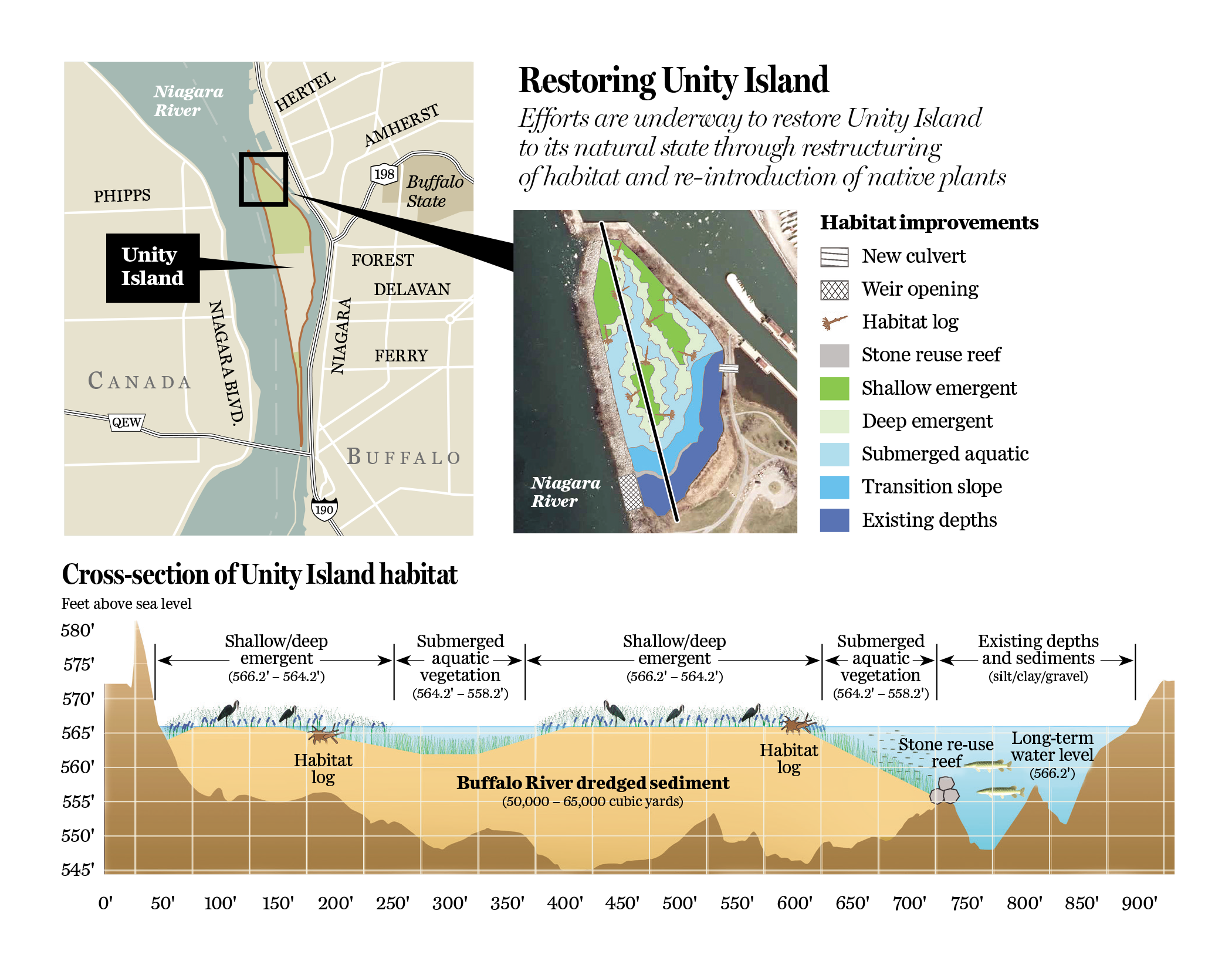 Some of the 15 or so poplar trees cut down at the site will remain as habitat logs, providing hiding spots for fish, basking locations for turtles and perches for shorebirds.

A fish passage will connect the pond to the Niagara River, allowing fish to move in and out of the swift current.

Here's what biologists expect at the new wetland:

• Fish like muskellunge and northern pike will spawn and nurse in the shallow shoreline habitat;
• Marsh and shore birds like herons and rails will forage and nest;
• Turtles will move in to lay eggs and bask in the shoreline sun.

The 5 acres of shoreline habitat will also provide access to the streams and ponds already in place on the northeastern side of Unity Island.

“It’s really beneficial to the fish community, as well as the waterfowl,” Hannes said. “In the upper Niagara River corridor through industrialization, all of this riverine wetland habitat has been lost.”

But experts don’t know everything that will happen here, Hannes said.

They’ll need to study the evolution of the habitat and its resident wildlife, then make adaptations where necessary.

“This project is very novel, so there is some uncertainty about how it’s going to establish over time,” Hannes said.

It could be as long as five or 10 years before an established shoreline habitat is in place. 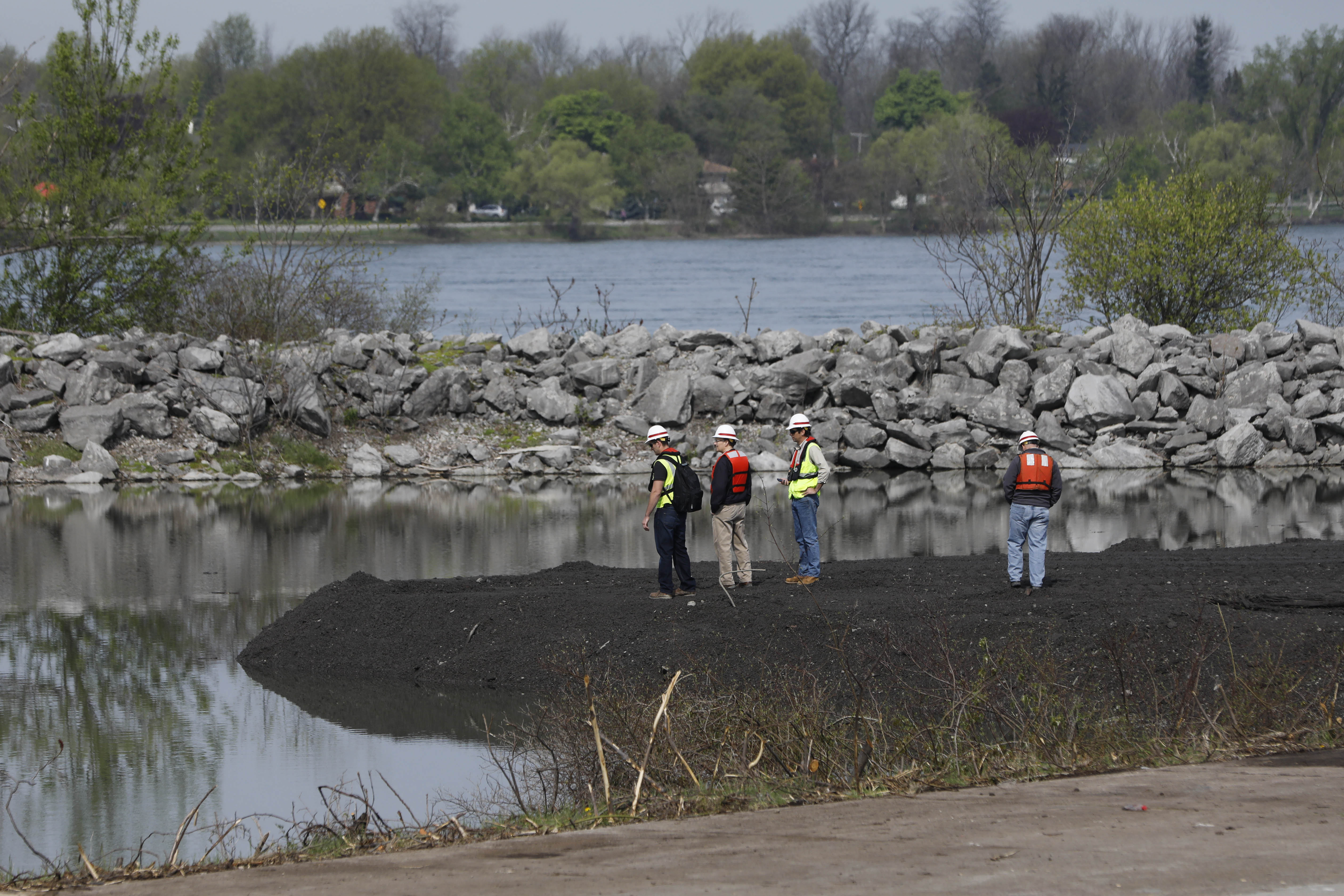 U.S. Army Corps of Engineers personnel survey progress of a project using cleaned dredged material from the Buffalo River to create a shallow wetland habitat where a deep pond exists on the northern end of Unity Island. (Derek Gee/Buffalo News)

The Corps of Engineers can now in a single project fulfill two of its missions – routine maintenance of the river’s navigation channel and aiding the ecosystem.

“Now, clean sediment is coming down the watershed into our dredged channels and we can think creatively about how to utilize this material,” Hannes said.

The Buffalo River receives waters from a 400-square-mile watershed that starts as far away as Sardinia and includes portions of the towns of Holland, Colden, Aurora, Wales, Elma, Orchard Park, West Seneca and others.

Buffalo Niagara Waterkeeper estimates the flow deposits about 90,000 cubic yards of sediment into the river every year.

In all, about 135,000 cubic yards of sediment is expected to be dredged from the Buffalo River by the Corps of Engineers this year – a job it performs every two years to keep the channel open for shipping.

The Corps of Engineers’ biennial dredging of the river’s federal navigation channel between Buffalo Harbor and just past the South Park Avenue bridge near the Tesla plant ensures a regulated depth and width. It also protects communities in the watershed from flooding.

The boats hauling the dredged material used to head south from Buffalo Harbor to a confined disposal facility near the former Bethlehem Steel site in Lackawanna.

Now, the boats collecting the cleanest dredged material turn north at the Buffalo Lighthouse about every three hours.

Later, the rest of the dredged material – from lower stretches of the river – will be taken to the Lackawanna disposal facility because testing revealed it’s not yet clean enough for use in the restoration project.

“It’s a very strict screening and testing evaluation,” Hannes said. “We’re highly confident this material is appropriate for this use.” 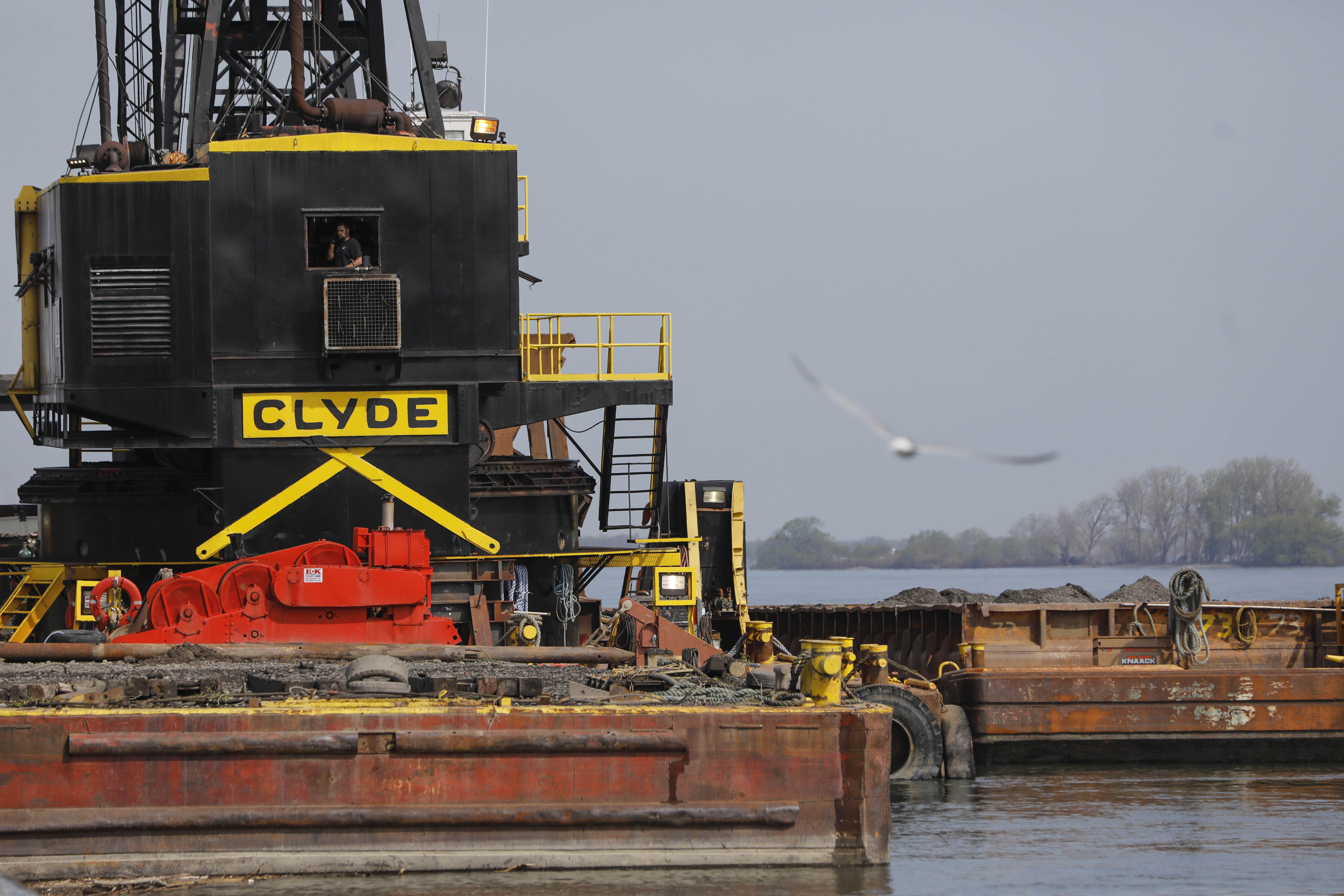 A mechanic is pictured in the window of the engine room in a large crane on a barge is being used by the U.S. Army Corps of Engineers to move clean dredging material from the Buffalo River to create a shallow wetland habitat where a deep pond exists on the northern end of Unity Island. (Derek Gee/Buffalo News)

Three boats are in a constant rotation between the upper reaches of the Buffalo River and the Black Rock Lock.

When one is being filled with sediment, another is docked outside the lock as its contents are unloaded 10 cubic yards at a time by a clamshell bucket loader affixed to a crane.

The third boat is traveling between the river and Unity Island, either filled with 1,000 cubic yards of dredged sediment toward Unity Island or empty as it heads back toward the river to be refilled.

Each boat rotates between each job every three hours.

Between 50 and 65 boat trips will bring sediment from the river to Unity Island by the time transports are finished in early June.

The sediment being pulled from the Buffalo River is a combination of gravel, sand, silt and clay.

Crews in June and July will place and arrange the sediment in the pond, officials said.

The Corps of Engineers will build the foundation of the habitat pond with the coarser materials first, then plan to "top dress" the area with finer sediment before beginning their wetland plantings later this summer. Additional plantings are scheduled in 2019 and 2020.

This project is a big deal – for Buffalo and the Great Lakes, Corps of Engineers officials said.

The Niagara River is designated as a federal area of concern by the U.S. Environmental Protection Agency because of its history of industrial pollution and habitat degradation. 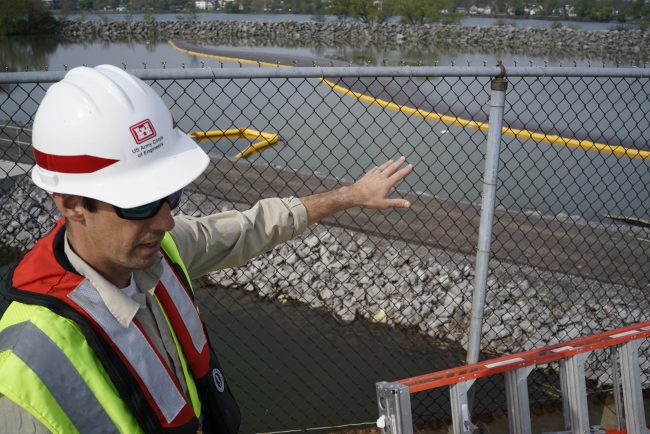 U.S. Army Corps of Engineers Ecologist Andrew Hannes talks about the plan to use clean dredging material from the Buffalo River to create a shallow wetland habitat where a deep pond exists on the northern end of Unity Island, Wednesday, May 16, 2018. (Derek Gee/Buffalo News)

It's overseen shoreline habitat restoration projects in the Mississippi Delta and Gulf Coast for years.

Similar projects are also now in the pipeline in Cleveland, Toledo, Ashtabula and Lorain, Ohio.

And, more projects are planned in Buffalo.

A coastal wetland restoration project at Buffalo's Outer Harbor commercial "Slip 3" near Wilkeson Pointe is planned for the next round of Buffalo River dredging in 2020.