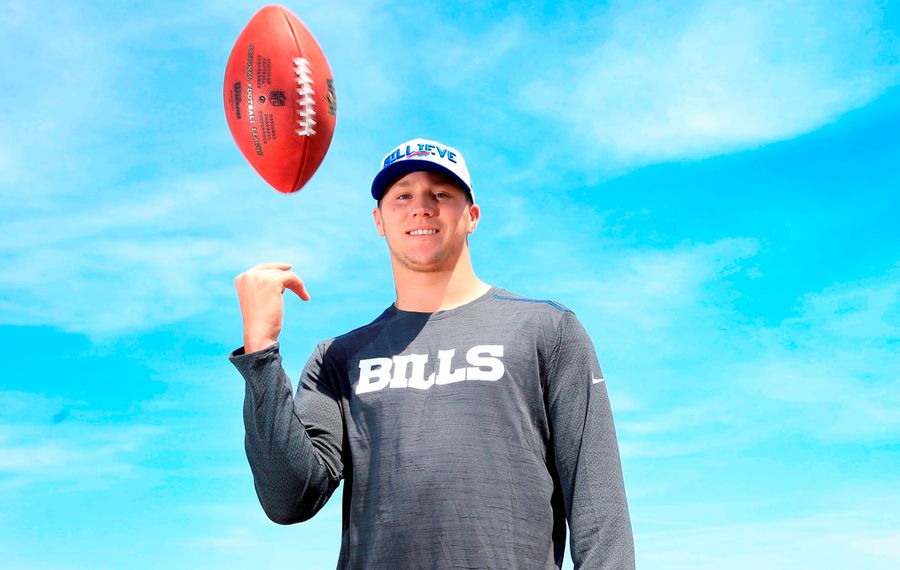 The Buffalo Bills drafted their next great hope at quarterback with the seventh overall pick of the 2018 NFL Draft. This is the fifth of a five-part series, "You bloom where you're planted: The cultivation of Josh Allen." (Read Part 1 here,  Part 2 here, Part 3 here and Part 4 here.)

FIREBAUGH, Calif. – Few people have experienced Wyoming football like Jerry Hill has. He's from there, still lives there, played for the university and, at 78, still attends some games at War Memorial Stadium.

He was a Baltimore Colts fullback until 1970, winning a Super Bowl. Since he retired, only four players from the University of Wyoming logged more NFL games.

So when is the last time Hill remembers Wyoming football being as exciting as it was the past two years with Josh Allen at quarterback?

That is the program-jolting panache Allen brought to the Wyoming Cowboys.

Allen didn't annihilate the school's record books; he played 27 games. Other quarterbacks whipped the ball around the Skyline and Western Athletic Conferences with abandon over three or four seasons, but no Wyoming quarterback has thrown an NFL pass.

Buffalo traded up to select him seventh overall, the latest in a sequence of overachieving moments that took Allen off the family farm in miniscule Firebaugh, Calif., through zero scholarship offers out of high school to modest Reedley College and a solitary Division I opening.

In itself, Wyoming's scholarship didn't guarantee much. Wyoming's lack of a track record was another challenge Allen had to conquer on his longshot odyssey.

"It was something I always wanted," Allen said at his One Bills Drive introductory news conference. "To say that I was sitting there, knowing it was going to happen, I couldn't say that. It was a long road, a long journey in front of me. It was very frustrating at times. But, in the end, I'm sitting here."

Although Wyoming has a reasonable NFL registry for a non-power conference that must recruit to a small town such as Laramie, the program's history provided zilch to forecast Allen's future.

"When you go out and do what he did in his career at Wyoming, yes, there were people who believed in him," Chicago Bears receiver and favorite Wyoming target Tanner Gentry said.

"But I guarantee there were more people who didn't."

Wyoming has boasted two all-conference quarterbacks, Paul Toscano in 1967 and Randy Welniak in 1988 and one national passing leader, Josh Wallwork in 1996. None was drafted.

The lone Wyoming products to have thrown an NFL pass are running backs Jim Kiick in the early 1970s and Jim Crawford in 1963.

If Allen can channel in the NFL the same upstart spirit he displayed in Laramie, then perhaps he can accomplish a first for Buffalo – as he has for Firebaugh, Reedley and Wyoming.

"I want to be the quarterback that brings the Super Bowl to Buffalo," Allen said recently on his family's farm in Firebaugh. "With all the success that's happened there, it's never been done.

"I want to be that guy. To be talked about like Jim Kelly one day would be fantastic. To know I helped a city accomplish its dream of winning a Super Bowl – hopefully multiple – that's why I play the game.

"I want to be regarded as one of the best to ever play. To do that, you've got to win Super Bowls. And to solidify your legacy within a city, not many people can say that."

Sure supersedes being compared to Jimmy Walden.

A repetitive rah-rah talking point about Kelly was that he played quarterback with a linebacker's mentality.

Super Bowls or not, a quarterback who approaches the game like a special-teamer likely would go over well in Western New York.

"He's got that Steve Tasker, Bill Bates mentality, that work ethic where they gave it all they got," said Ernie Rodriguez, Allen's offensive coordinator at Reedley. "He just happens to be blessed with a frickin' rocket."

From Wentz he came

Vigen came to Laramie with head coach Craig Bohl from Division I-AA North Dakota State, where their quarterback was Carson Wentz, another late physical bloomer with no big-school offers out of high school and who attended a university with no previous NFL-QB pedigree.

Wentz started two seasons at North Dakota State and proved tantalizing enough for the Philadelphia Eagles to draft second overall in 2016. He was enjoying an MVP-caliber season for the eventual Super Bowl champs until a left knee injury felled him.

"Their physical comparisons are obvious, but the numbers are numbers," said Vigen, who recruited both. "They both have a great desire to compete at the highest level. They both go about their business the same way.

"Carson, obviously, has excelled to great heights in his first two years. Time will tell for Josh, but I certainly like the track that he's on."

Admittedly biased and with a brief glimpse of the NFL so far, Gentry insisted Allen has what it takes to excel at the next level.

"He can do whatever he wants," Gentry said. "He has every single tool you need to be the best quarterback in the league, and I know he won't stop until he gets there."

Gentry was a senior during as Allen's first full season as Wyoming's starter.

From Pop Warner to Bills, playing QB was 'only thing' Josh Allen ever wanted to do

Allen led the Mountain West Conference in touchdown passes and total yards, helping the school notch its first victory over a ranked opponent since 2002 (and then did it again) plus go undefeated at home for the first time in 20 years.

Gentry caught 72 passes and led the Mountain West Conference with 1,326 yards and 14 touchdowns.

One touchdown in particular made Gentry laugh when asked to relay a quintessential Allen moment.

Allen threw for 334 yards and four touchdowns in a 69-66, triple-overtime loss to UNLV. Three of the strikes were to Gentry, the first came 64 seconds before halftime.

Allen delivered Vigen's play call to the rest of the offense, but then took Gentry aside for special instructions.

"He basically tells me to scratch what the play call was supposed to be and told me to run a go route," Gentry said.

Gentry bolted up the right seam. Allen nestled into the pocket and, from his own 46-yard line, threw a perfect pass to Gentry at the goal line. UNLV cornerback Darius Mouton had tight coverage as they leapt. Gentry snagged the ball with his right hand and pinned it to his armpit for the 48-yard touchdown.

"That's what I loved about him, the gunslinger mentality," Gentry said. "He wanted to make big plays and knew he could do it." 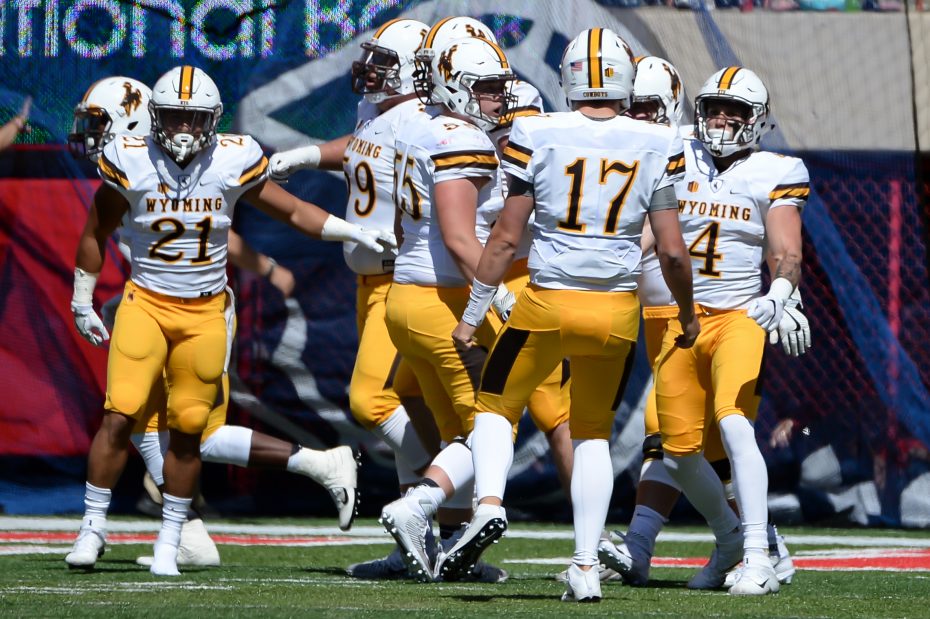 Wide receiver Tanner Gentry (4) and quarterback Josh Allen (17) of the Wyoming Cowboys celebrate with teammates a score against the Nebraska Cornhuskers at Memorial Stadium on Sept. 10, 2016, in Lincoln, Neb. (Steven Branscombe/Getty Images)

Allen decided after his strong 2016 season to enter the upcoming NFL Draft. He met in Firebaugh with agent Tom Condon of the powerful Creative Artists Agency and decided to make the leap.

Allen's decision didn't last until the next morning. He felt queasy about informing Bohl and Vigen. That alerted Allen he wasn't making the right choice.

"Last year, I think his problem was being gun shy," Hill said, "because the offensive line couldn't keep anybody out of the pocket, and he didn't have his receivers from the year before.

"I think Josh was overwhelmed, but if Buffalo can get him three or four seconds, he'll do really well."

Allen had one season of NCAA eligibility left and could have returned to Wyoming for 2018.

But there's only so much a quarterback can accomplish in Laramie.

He signed with four CAA agents, including Condon and Todd France, whose personal firm was purchased by Bills owner Terry Pegula in 2011. When Pegula had to divest himself from the agent biz to purchase the club in 2014, France re-acquired his firm and eventually moved to CAA.

Imagine how far that would go in Firebaugh or Laramie or Orchard Park.

Allen already has. He has been drooling over Southtowns real-estate listings online and how much house he can buy there.

Money, though, seems secondary to him and his family. Even with the hardships his parents have endured with agriculture the past seven years, Joel Allen scoffed at the thought his son's imminent wealth could save the family farm.

Before the draft, Allen Ranch was able to secure financing to stay afloat.

Josh Allen's business is all about football and, from the moment NFL Commissioner Roger Goodell called the quarterback's name, the enterprise is Buffalo.

"Tears were flowing everywhere at the draft because we all know what kind of kid he is, how hard he works, how polite and respectful he is," his uncle, Todd Allen, said. "He's the total package.

"I never dreamed anyone I know could throw it over 80 yards in the air. I just can't believe how it all turned out."

Now that Allen is in the NFL, he must reconcile being a team player with his desire to take over the Bills' offense, to deliver the same sort of entertainment he did with Wyoming the past two years.

He has needed to wait his turn at multiple steps along the way before getting his shot. A slower roll seems to have helped his development so far.

"He's not satisfied with just making a roster," Rodriguez said. "He wants to be The Man. That's the key."

McCarron is entering his fifth NFL season. He started four games for the Cincinnati Bengals, once in the playoffs. Nathan Peterman returns to Buffalo after making two starts last year as a rookie.

Allen has been deferential, but isn't bashful about his mission.

"They drafted me to play, drafted me to be their quarterback, hopefully, for the next 15-plus years," Allen said. "I'm not going to be pressuring myself – and I don't think I'll be pressured by my coaches – to get on the field right away.

"I have to learn behind AJ, learn behind Nate. I'm not expecting it to be pretty right away, but when I do get my shot I'm going to make sure I'm prepared and trust my coaches and teammates."

Allen already has taken a shine to Western New York. It fits with the small towns he has known.

A substantial difference – beyond the money – is that unlike Firebaugh or Reedley or Laramie, playing football in Buffalo provides an actual chance to win the championship.

What a heady thought. Whether this year or next, Allen expects to be one of the NFL's 32 starting quarterbacks alongside Aaron Rodgers, Cam Newton, Ben Roethlisberger, Russell Wilson.

The name that makes him savor the idea, though, is his favorite, New England Patriots legend Tom Brady.

"Now I get to play him twice a year," Allen said.

He stopped for moment, unable to stifle a grin.

"And beat him twice a year."