History is hot in Buffalo. You need water to cool it down.

Which is where the Buffalo River History Tours come in. They are as much a part of Buffalo's waterfront as the big Labatt beer cans.

The River Queen, the tour's original craft, holds 48 passengers and handled many of the tours before Memorial Day. Now that summer is in full swing, the main tour boat is the Harbor Queen, which debuted in 2016 and can hold 145.

The boats leave from the Central Wharf and sail rain or shine. They navigate the twists and turns of the Buffalo River, exploring Buffalo's industrial past.

Nine of us boarded the River Queen recently for a 2:30 p.m. tour. The day was sunny and warm.

"We have a bar on board, and to complement that, we have a bathroom," said our guide, Siobhan Clements. She added: "My jokes are a little funnier with a glass of wine."

Passengers included Tom and Phyllis Grover, expats who used to live on Buffalo's waterfront and now live in Florida; and Anne and David Williams, a couple from Rushford celebrating their 35th wedding anniversary. Everyone fell into an easy companionship as Kyle Taylor, at the wheel, piloted the boat onto the river.

Clements, without any notes, kept up a seamless patter of facts and figures and jokes. There was always something to see. 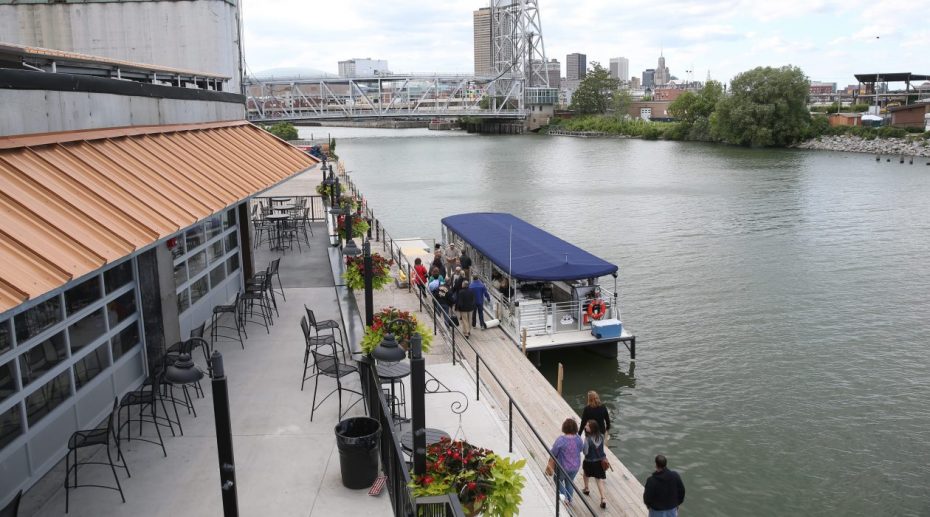 I had known about our historic fire boat, the Cotter, but I never knew those cute little red tugboats, the Washington and the Vermont, were also over 100 years old.

Round another bend we encountered the S.S. Columbia, a sister ship to our old Crystal Beach Boat, being refurbished here in Buffalo in hopes of seeing service as a cruise ship on the Hudson River. Wow, that's a project, I thought, staring at the huge hulk. I said a silent prayer of thanks it wasn't mine.

We learned about the science of lift bridges and grain elevators, which spoke eloquently of Buffalo's past as the world's largest grain port. One behemoth of a structure, Elevator Alley, is the largest concentration of grain elevators in the world.

There is a magic to a voyage on the Buffalo River. It's like looking at the city inside-out. Passing Riverworks, we waved to the folks drinking beer on the patio. This being Buffalo, they waved back.

Just when we thought we were headed back to Canalside, the boat took a surprise sweep out onto the lake. We got to glimpse the Buffalo skyline from a splendid vantage point.

The Grovers, the Florida expats, had owned a boat when they lived in Buffalo, but Phyllis Grover noted that this was different.

She explained: "It's not the same when you don't have someone telling you what everything is."

Captain Ric Hilliman, who runs the Buffalo River History Tours as well as the sailboat called the Spirit of Buffalo, beamed when he heard what she said.

"We try to give everyone something," he said.

"People take this tour who lived in Buffalo their whole lives, and they say, 'I never knew that.'"

Where: Boats leave from 44 Prime St., Canalside. For info, visit buffaloriverhistorytours.com or call 796-4556.

Tip: As long as the cruise isn't sold out, feel free simply to step up, pay your fare at the booth, and hop on board. Captain Ric Hilliman said, "We've sailed with as few as two people."