The Buffalo Bills drafted their next great hope at quarterback with the seventh overall pick of the 2018 NFL Draft. This is the fourth of a five-part series, "You bloom where you're planted: The cultivation of Josh Allen." (Read Part 1 here,  Part 2 here, Part 3 here.)

Part 5 will be published on BNblitz.com Thursday.

FIREBAUGH, Calif. – Mistakes were made.

Suffice to say, everybody involved realizes that now. They've paid the price.

Josh Allen was a starry-eyed lad when he first dreamed of playing quarterback for Fresno State, of all schools. His love for the Bulldogs was unconditional despite their adequacy within a non-power conference.

"From 8 or 9 years old, you knew he wanted to go to Fresno State," said Chauncey Lee, one of Allen's Pop Warner coaches. "This kid was dying to play there. The parents probably would have paid his tuition. He didn't even need a scholarship."

He could have gravitated to Stanford or Cal or expanded the geography to USC or UCLA. But Fresno was about an hour's drive from his home in Firebaugh. Allen went to football camps there. The family used to attend Bulldogs games, tailgate, the whole nine yards.

Nine yards in football is just short of a first down. Allen fell short of Fresno State's desires.

Craig Knight worked on Firebaugh High's chain gang, marking off the downs and distances. He thought he knew Allen's situation.

"After his last home game, I walked up to give him a hug," said Knight, a two-time Firebaugh mayor. "I said, 'So what's next? You think you can play some ball in college?'

Allen wouldn't reach the pros via Fresno. At the time, there was no visible path for him at all.

Nah, Fresno State coach Tim DeRuyter said repeatedly, there wasn't anything Allen could do for his former program.

Allen wasn't taken seriously at Firebaugh High because of his and the school's size. Good college players don't come from there historically. The competition was nowhere near stacked.

Fresno State wasn't alone in whiffing the first time. Allen received zero four-year college offers out of high school, slipped to a modest Central Valley community college, sent roughly a thousand emails to every Division I head coach and offensive coordinator and received one opportunity – only after a priority recruit pulled out. 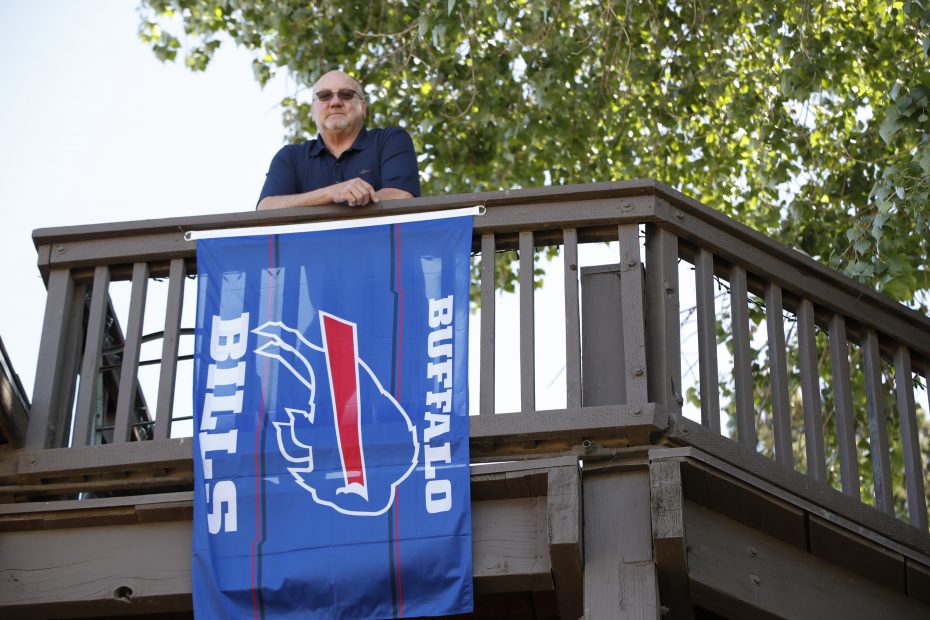 Craig Knight,  who worked on Firebaugh High's chain gang, marking off the downs and distances, displays his Buffalo Bills flag in downtown Firebaugh, Calif. He says Josh Allen told him he wouldn't stop until he hit the NFL. (Harry Scull Jr./ Buffalo News)

The Buffalo Bills last month traded up to land Allen with the seventh overall draft pick, a reward for his perseverance through myriad oversights, setbacks and rebukes.

With the exception of high school, Allen has entered each level of football no better than second string. He was a backup in Pop Warner, at Reedley College, at the University of Wyoming and presumably for now in the NFL. Buffalo signed veteran free agent AJ McCarron in March and second-year pro Nathan Peterman will return.

Allen has a track record for being overlooked and nonetheless overcoming.

"Some people think because you have an easier path you must've been better than everybody else," Magnusson said. "The people I've known that are the greatest are the ones that have had the hardest path.

"He's had an uphill climb, but that's made him better."

Fresno State fired DeRuyter during the 2016 season. At the introductory news conference for the next coach, athletics director Jim Bartko made a point to affirm Jeff Tedford knows "where Firebaugh is."

DeRuyter didn't even need to travel to Firebaugh. Allen came to him.

Magnusson recalled a passing camp at Fresno State. Bulldog coaches divided the quarterbacks between two fields. With one look, Allen deduced he had been lumped with the also-rans.

Allen's group was instructed to throw basic hitches and swing routes, while the preferred quarterbacks aired out fades, corners, verticals and posts.

"I could tell Josh was upset," Magnusson said. "He knew he could throw better than any of those guys over there.

"In my head, I'm going, 'What are they missing?' I know he was small compared to some of the other guys, but the kid didn't have a hair on his face, and he's throwing 65-yard bullets. You probably ought to take a look at him."

Magnusson lobbied DeRuyter to put Allen in the select group. DeRuyter shrugged him off.

DeRuyter now is defensive coordinator at Cal. Through a university spokesman this week, DeRuyter declined comment to The Buffalo News.

After the camp, Magnusson recalled, Allen made a vow:

When I take my team that won one game in eighth grade and win the Valley, I'll get the recognition.

Firebaugh didn't quite win the Central Valley championship his senior season, but did compile 10 victories.

"He still didn't get the recognition," Magnusson said.

Allen was so determined to play Division I football that one might wonder if he willed his body into a second growth spurt.

Sports measurements are dubious no matter the level. Coaches and kids cheat a few inches or pounds wherever they can to entice a recruiter or intimidate an opponent. Image-conscious professionals might try shrinking the numbers to seem svelte.

Allen was listed at 6-foot-3, 180 pounds as a Firebaugh High senior. Others assert Allen was 6-2.

"He was this scrawny kid," Allen's mother, LaVonne, said. "We thought he was maybe done because of his size, and he comes back from Reedley looking like he grew three inches."

When Allen arrived at Wyoming seven months after graduating from high school, he was introduced at 6-5, 215 pounds.

The NFL Scouting Combine is the closest we get to learning official heights and weights. Allen measured a speck under 6-5 and 237 pounds, the tallest and heaviest quarterback in this year's draft class.

Allen might forgive all those mistaken coaches if their lone aversion was his size. But anybody who saw Allen play live should have seen he was worth a crack.

"There were things that happened to my body after I went to junior college," Allen said. "I got bigger, stronger, faster.

Rather than add Allen as a freshman, Fresno State committed itself to Zack Greenlee and Brandon Connette, a graduate transfer from Duke. Greenlee later switched to UTEP, where he started 11 games over his junior and senior seasons.

Chason Virgil is the Fresno State recruit who still makes Allen wince. Virgil was advertised out of high school at 6-2, 175 pounds. When Virgil arrived at Fresno State, his listing dropped an inch. He since has left Fresno State and hopes to play this year for Southeastern Louisiana.

Reedley isn't known for catapulting football players to the NFL, but the Fresno-area community college was Allen's best option after high school.

Through the season, Allen completed only 49 percent of his throws. But he amassed 2,055 yards and 26 touchdowns with five interceptions. He ran for 660 yards and 10 touchdowns.

"I told him and his parents," former Reedley offensive coordinator and quarterbacks coach Ernie Rodriguez said, "that if he comes back for his second season, you can call your shot. This guy would've had every frickin' D-I school after him because he'll be the No. 1 rated juco quarterback in the nation, guaranteed.

"But Josh was adamant. He had a chip on his shoulder. He wanted to prove everyone wrong who doubted him. He just wanted to get to the next level immediately."

So Allen typed up an email, included a link to his highlight tape and sent it to all the FBS head coaches, offensive and defensive coordinators and quarterbacks coaches. A smattering of replies dribbled back.

Allen ended up with two scholarship offers, but each carried an asterisk. Wyoming didn't pursue Allen until Oregon high schooler Eric Dungey instead committed to Syracuse. 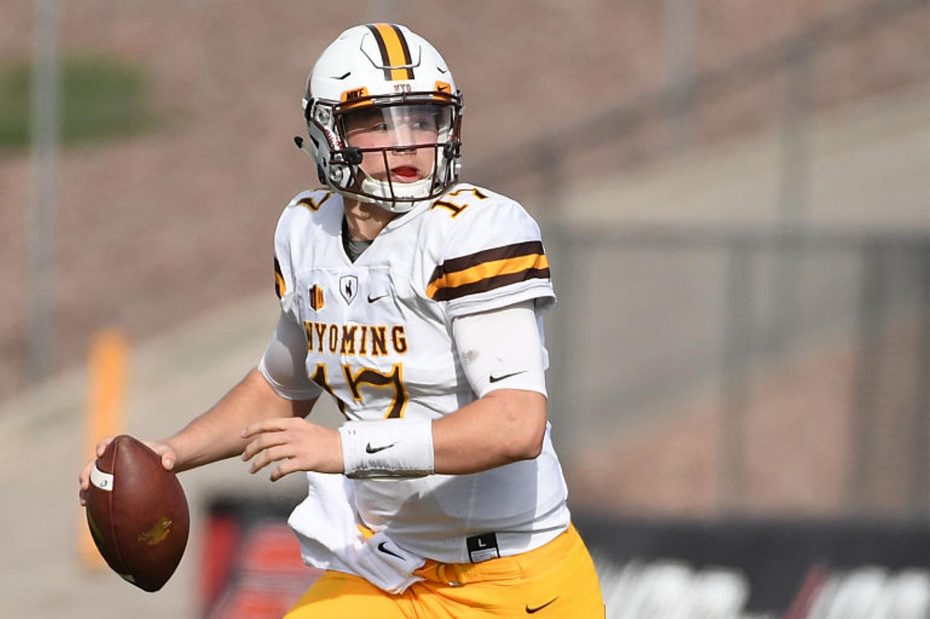 In the first game Josh Allen started for the University of Wyoming, he shattered his collarbone. (Getty Images)

Allen's Division I decision essentially was made for him. He headed for Wyoming, where he began as Indiana graduate transfer Cameron Coffman's backup.

Coffman injured his knee in the season opener, clearing the way for Allen to start the second game. Against Eastern Michigan. At the end of a 24-yard run in the first quarter, Allen refused to slide and absorbed a hard tackle.

Allen once again was forced to wait against his will. All the pauses, however, have proved beneficial throughout his football journey.

"Whenever a door would close," LaVonne Allen said, "we would turn around and another door would open.

From Pop Warner to Bills, playing QB was 'only thing' Josh Allen ever wanted to do

Fresno State might be the final occasion Josh Allen needs to be told something twice.

Rejection was channeled into fury at Wyoming, perhaps to an unhealthy degree.

"I just wanted to go out there and beat everybody because I hated them," Allen said. "I wanted to prove myself that way, and I was doing it for all the wrong reasons."

Magnusson noticed. He counseled Allen to make a subtle change to his approach.

Confirmation – not vengeance – should be the motivation.

"It wasn't about going out there to embarrass people anymore," Allen said. "It was about having fun, and at the same time I happened to be damn good at it.

"I developed a platform and help other kids who were in the same situation I had, coming out of high school with no offers, finally getting your one chance and capitalizing."

Allen claimed his attitude adjustment made him a better leader. No longer was he focused solely on settling personal scores.

Along the way, his doubters received the message anyway.

San Diego State coach Rocky Long, specifically citing how he misfired by offering Allen merely a walk-on shot, explained in April he had restructured the Aztecs recruiting process to prevent a similar blunder.