The Buffalo Bills drafted their next great hope at quarterback with the seventh overall pick of the 2018 NFL Draft. This is the third of a five-part series, "You bloom where you're planted: The cultivation of Josh Allen." (Read Part 1 here and Part 2 here.)  Part 4 will be published on BNblitz.com Wednesday.

LOS BANOS, Calif. – Josh Allen, all of 9 years old, was a backup tailback and safety on his first Pop Warner team.

The idea of throwing passes someday for the Buffalo Bills was outlandish. He seemed to have trouble making the Dos Palos Broncos' roster.

Allen stood on the sideline and watched his Broncos get slaughtered in a scrimmage against the Los Banos Tigers. Then the starting tailback needed a potty break. Allen dashed onto the field.

"And here comes this kid," Los Banos offensive coordinator Tyrell Jenkins said, punctuating his words by smacking the back of his right hand into the palm of his left.

"He was a shorty," Jenkins said, "but you just saw the passion. We're saying, 'Man, this kid is losing by 50 points! He just won't quit! If we had 10 of him? We're winning the league championship!'

"We just happened to say all this near his father, who we didn't even know."

Allen's performance apparently wasn't enough for Dos Palos. His dad said the Dos Palos coaches after the game reaffirmed the bathroom-breaker would continue to start. Plus, they cut Josh's little brother.

Josh and Jason Allen still were in elementary school, far from developing into athletes with legitimate pro aspirations. Jason often was more physically developed than Josh, by most accounts was the greater athlete and would go on to play college baseball.

Joel Allen suspected his sons were being punished by rivalry politics.

The Allens are from Firebaugh, a town without a Pop Warner team at the time. Kids from Firebaugh used to attend Dos Palos schools until Josh's grandfather, A.E. "Buzz" Allen, fought to establish the Firebaugh-Las Deltas Unified School District in the 1970s.

Joel Allen sensed Dos Palos' coaches were being malicious toward his family.

Josh Allen turned in his jersey. His father was proud, but now neither of his boys had a team.

Until Joel remembered overhearing those Los Banos coaches fawning over Josh's ferociousness in a scrimmage defeat.

"If Joel was 25 feet farther away from us that day," Jenkins said, "it probably would have been something we talked about for years to come, like, 'Hey, I wonder whatever happened to that kid?' He had heart." 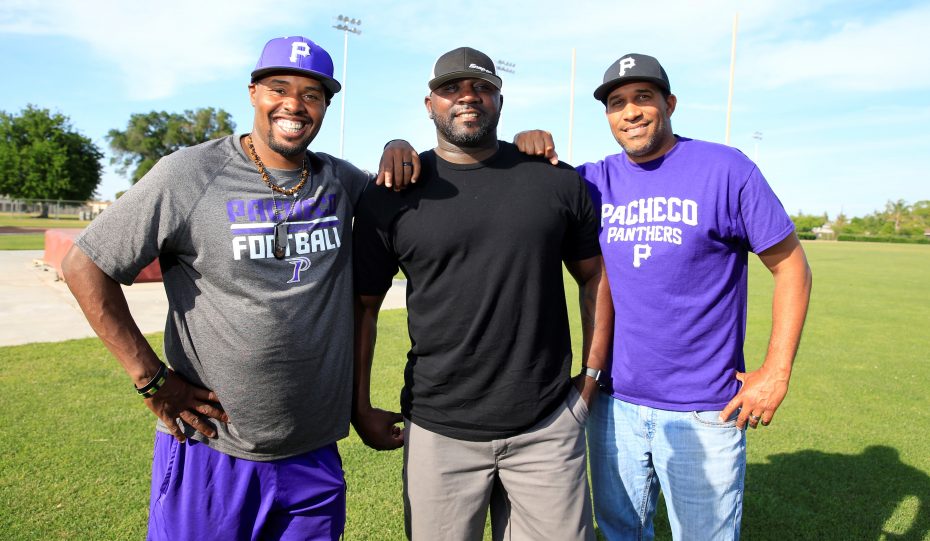 They wouldn't need to guess. That kid became an intriguing quarterback prospect at the University of Wyoming, and Buffalo selected him seventh overall in last month's NFL Draft.

Allen's career unfolded in part because, two days after the Allens refused to be put in their place, Joel wheeled his big pickup truck from Firebaugh to Los Banos – 45 minutes away, with Dos Palos in between – and through the chain-link gate at Loftin Stadium, much to the glee of Tate, Jenkins and Lee.

"You got a lot of kids like that who don't get chances, and they just give up," Tate said. "In life, you really don't know what's going to come your way. You just got to keep on pushing."

Perseverance has been a hallmark of Allen's football trajectory. He overcame snubs and backup roles throughout his Pop Warner, high school, junior college and university days.

But without those Los Banos coaches, who knows what the butterfly effect would have caused?

"They believed in him from Day One," said Allen's mom, LaVonne Allen. "They genuinely loved Josh, loved our family.

"Your first coaches teach you to like or dislike a sport. If you get a bad coach who berates or humiliates a kid, they can push them out. But they were so complimentary and such good coaches, from the heart."

Competitive from the cradle

The first word Cindy Best remembers hearing her nephew say, as he reached toward the sky, was "Touchdown!"

Not quite the first word, LaVonne replied, although Josh might have uttered only a couple of words earlier. "Ball" and then "football" were in his initial vocabulary, too.

Josh's parents quickly realized his early fascination with sports was not for entertainment purposes only. The allure included a hot competitive streak.

"I think he was 4 years old," Joel said. "He was playing T-ball, where the games always ended in a tie regardless of the score. It was fun, watching them run around the bases and trying to make a play.

"But Josh took it seriously. After one game, he said, 'Dad, we scored more runs than those guys! It wasn't a tie!' He threw the biggest fit."

The Allens never were fans of specialization. Parents risk burning out their children or missing other opportunities by forcing them to focus on a single sport or, in some cases, one particular position.

All four Allen children – Josh and Jason are sandwiched between sisters Nicala and Makenna in the pecking order – participated in multiple sports. If there was a league or a school within driving distance, then the Allens tried it.

Josh gave karate, golf, flag football, soccer and even gymnastics a whirl. The back flips were with Jason because LaVonne got sick of trying to corral her hellions at the facility while Nicala practiced.

Josh also stuck with basketball and baseball through high school. He played first base and pitched, his fastball clocking at 92 mph.

"I still think I could play college baseball or college basketball somewhere," Josh said without a morsel of sarcasm. "Playing sports year-round kept my competitive edge up, allowed me to train different parts of my body, and feel it developed me as a full athlete."

All five quarterbacks drafted in the first round this year played at least two sports in high school.

Many sports, one love

Throughout all Josh's athletic endeavors, however, there was only one sport he wanted to mainline into his veins.

"Once I played quarterback," Josh said, "that's the only thing I've ever wanted to do."

That brings us back to Pop Warner.

When Josh arrived at Los Banos, he hadn't played any quarterback. The coaches fought over what position he would play. Tate and Lee were defense-oriented and fancied his fearlessness at safety.

"He was a gamer," Lee said. "Regardless of where we would have asked the kid to play, he would have done it."

Jenkins, the offensive coordinator, won out. Los Banos' incumbent quarterback had started for them the previous season, but there was something about Josh's charisma that couldn't be denied.

So Los Banos' coaches suffered the other parents' grumblings and gave Josh a chance to run the show.

"Josh took it like he was an NFL quarterback," Jenkins said. A stupefied smile crossed Jenkins' face at the memory. "Right after the game, he would be talking about the game plan for next week, telling me what his favorite pass plays and run plays were for the upcoming opponent.

Jenkins soon discovered he had trouble staying a few steps ahead of Josh's obsessiveness. As a challenge, Jenkins created play scripts for the next game and quizzed Josh about, say, the sixth play and why it was designed to set up the eighth or 11th.

Josh was a savant in his absorption of schemes. 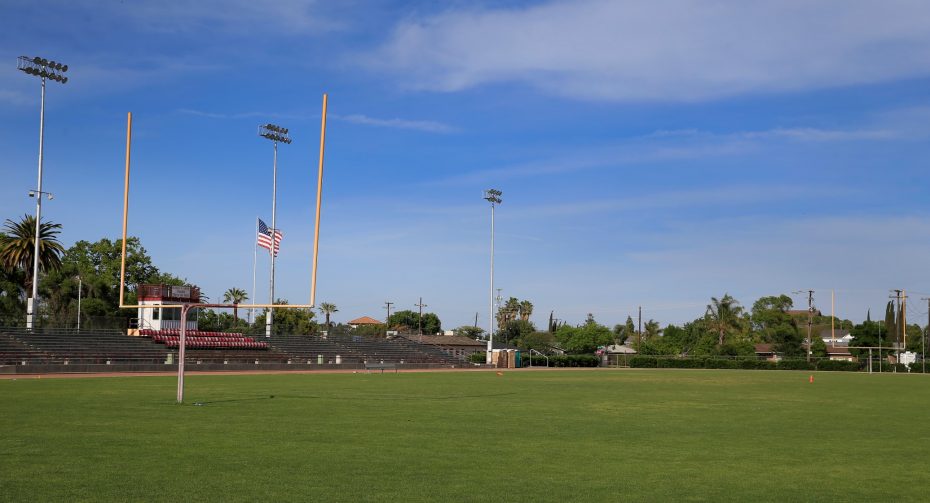 The field where Josh Allen played for the Los Banos Tigers in the Pop Warner league when he was a youngster. (Harry Scull Jr./Buffalo News)

Amid the usual chaos of a youth sideline, Jenkins sometimes had to wrangle players while Josh was on the field. Josh would gesture at his offensive coordinator to let him call the next play, and Jenkins was comfortable with it.

Josh made checks at the line of scrimmage, repositioned his linemen before the snap, put receivers in motion, called audibles.

Those Pop Warner afternoons, though, sure were fun.

"You see the dreams and excitement when all the kids stare into our eyes and live on every word that we say," Lee said, "because we're gods to them. But we were still kids ourselves back then."

Lee shook his head as he reminisced. One moment stood out to him: At a postseason awards banquet, he remarked some grousing parents weren't fully appreciating Josh's abilities.

Parts of the room responded with laughter.

"Are these people blind to the fact this kid is a bona fide stud?" Lee thought. "All they cared about was how much their kid was playing.

"We always thought, 'This kid is special.' He had that drive that he was always going to succeed, and that it's not about him. It's for his team.