The northern part of  Tifft Nature Preserve on Buffalo’s Outer Harbor has a different look.

Just last year it was overrun by acres of invasive buckthorn shrubs.

Now, saplings of swamp white oaks, American sycamores, silver maples and other native trees and shrubs grow on the land.

It’s part of a $147,000, multiyear project that’s creating native habitat for the rare blue-spotted salamander as well as other wildlife and shoreline birds at the preserve.

“The more native plants we have, the better the habitat is,” said Zach Goodrich, Tifft’s preserve steward.

That's a key ingredient for a nature preserve considered an "important bird area" by the National Audubon Society.

It is the third major habitat improvement project at Tifft in 10 years.

Others included the creation of a coastal marshland and planting 2,000 native flood plain trees across the 264-acre preserve.

The seasonal wetlands are smallish, shallow ponds — known as vernal pools — and range from just a few inches to a foot deep in the late winter and spring, then dry up entirely during the summer.

These temporary pools of water — and the native plants that grow in and around them — are vital to ecosystems.

"In many forested ecosystems, vernal pools provide the only water body for long distances in which mole salamanders (of which the blue-spotted salamander is one) can breed," Goodrich said. "They also support a particular abundance and diversity of invertebrate species."

He added: "Invertebrates are vitally important in supporting much of the life in forested ecosystems, as they are an important food source for many animals, including birds, reptiles and amphibians." 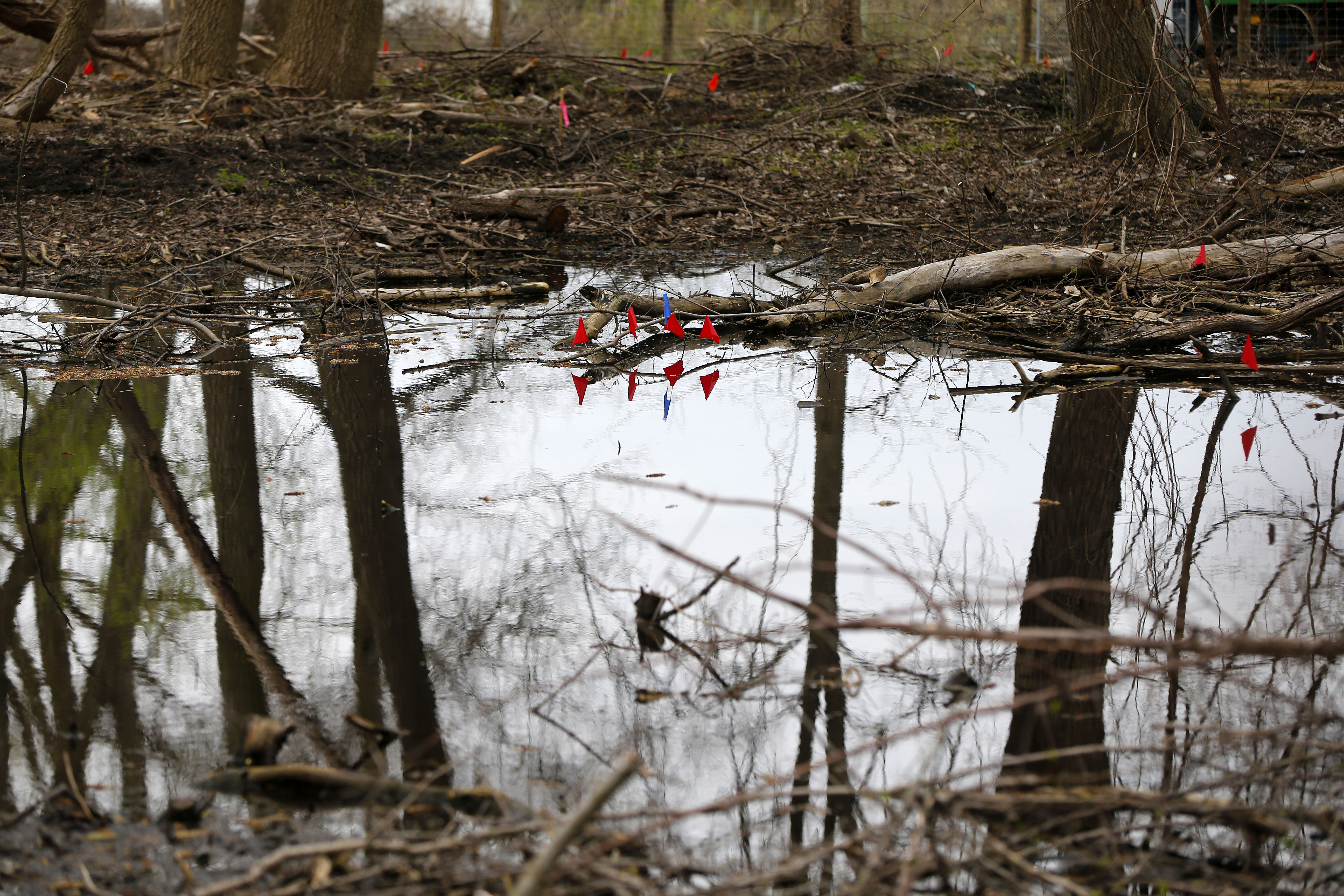 At Tifft, at least three of the smallish seasonal wetlands – just east of the Ohio Street off-ramp from Route 5 – provide habitat and breeding grounds for the blue-spotted salamander.

The salamander species is a 3-to-5-inch-long creature that’s considered a high priority species of “special concern” in New York State.

Biologists found the salamander’s presence at its urban shoreline home at Tifft can vary from numerous one year to sparse the next.

The species breeds in the early spring by laying masses of eggs in the seasonal wetlands. Larvae can take a couple of months to develop. 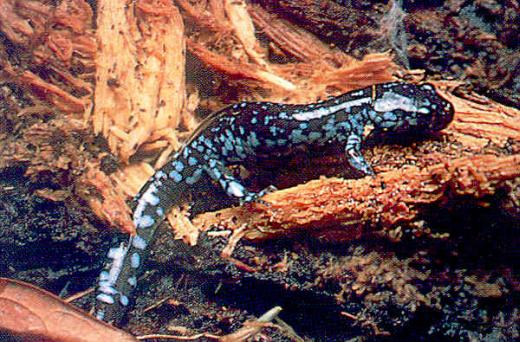 The blue-spotted salamander. (Connecticut Department of Energy and Environmental Protection)

Because those temporary ponds are not populated with fish, their eggs aren’t eaten. But, seasonal variations in the weather affect the eggs.

This project aims to change that. If successful, it should give the protected salamander a boost.

The aim of the project will be to extend the wet period of the ponds at Tifft.

Contractors will excavate about a foot of soil from each pond.

“Because of the history of the site, we don’t want to dig too deep,” Goodrich said.

They’ll line the newly excavated areas with plastic later this summer or early fall during the dry season. Then, the liner will be covered back with soil and natural debris.

If it goes right, the ponds’ wet periods in 2019 should be extended through the end of July.

That should directly aid the blue-spotted salamander as well as other amphibians and invertebrates.

“It’s about the salamanders, but it really is about providing a habitat for a variety of animals,” Goodrich said. 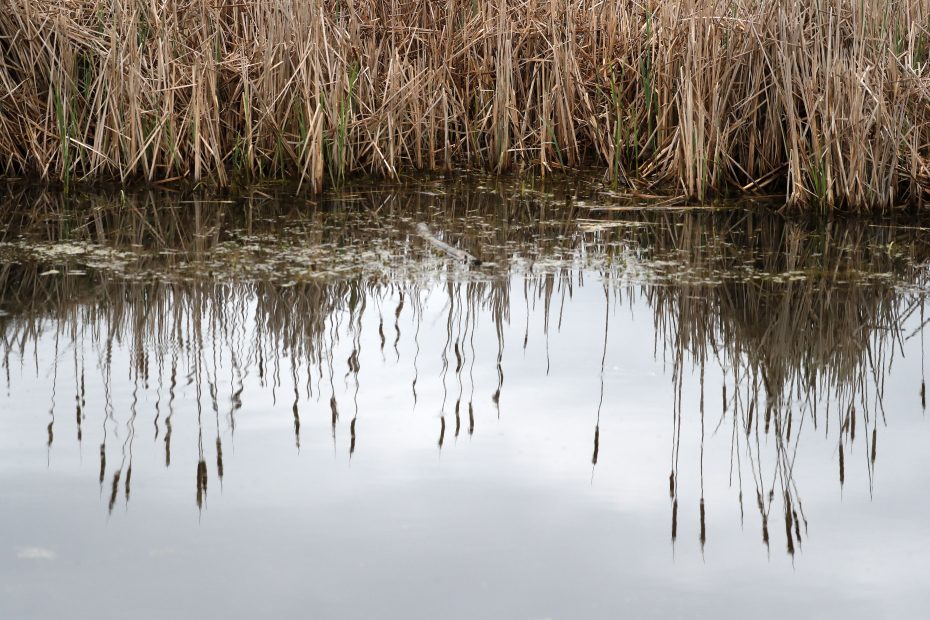 Last year, the invasive buckthorn covered about 95 percent of the demonstration site.

Then, Goodrich and staff from the Western New York Partnership for Regional Invasive Species Management, also known as "WNY PRISM," cut, tore and muscled it all off of the site.

Left behind is a canopy of mature cottonwood trees, willows and the shrubs and saplings that will form the basis for the new native ecosystem.

If all goes right, it’ll follow the path of the first one – a coastal marshland.

That’s where acres of invasive phragmites were pulled out and replanted with native bur-reed, pickerelweed, wool grass and swamp milkweed.

“This work is some of the best work that’s been done at Tifft,” Goodrich said.

What's been created is an oasis of what natural shoreline life along Lake Erie was like before grain elevators, steel mills, highways and marinas arrived.

Goodrich hopes the seasonal wetland habitat builds on that success with an even greater diversity of plant species on the shoreline landscape.

With that, comes “a buffet of insects for birds," he said. 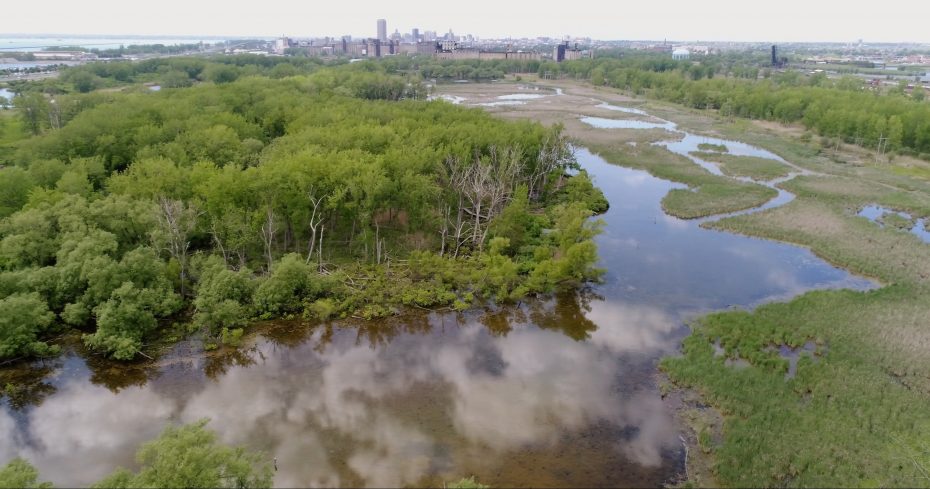 The ecological diversity also will make Tifft more resilient and adaptable to changes in climate.

“The first two years will be critical,” Goodrich said of the seasonal wetland habitat.

Critical, because they’ll need to analyze what species take to the landscape, and which ones don’t.

The buckthorn is removed for now, but it’ll grow back.

Continued maintenance will be necessary from it recolonizing. And, keeping the overabundance of resident deer at bay also will remain important.

That’s also why two-thirds of the 6-acre complex — and two of the three vernal pools — are enclosed by 10-foot-high fencing.

It'll also allow scientists to compare findings in spots where deer can browse from areas where they can't.

“We really want to show people what can grow if deer are excluded," Goodrich said.

Besides habitat restoration for its own sake, education and citizen science will be important components of the project.

Experts said visitors will quickly learn from the juxtaposition of invasive species on one side of the trail and a native habitat on the other.

A photo station also will be set up in the seasonal wetland encouraging visitors to take images of the landscape at various times of year and submit them by social media to the nature preserve.

Tifft will use those photos to document the development of the landscape through the weeks and months. And then, through the years.

“It might take 10 years for it to really look good,” said Goodrich said. “That’s the way it is with restoration projects.” 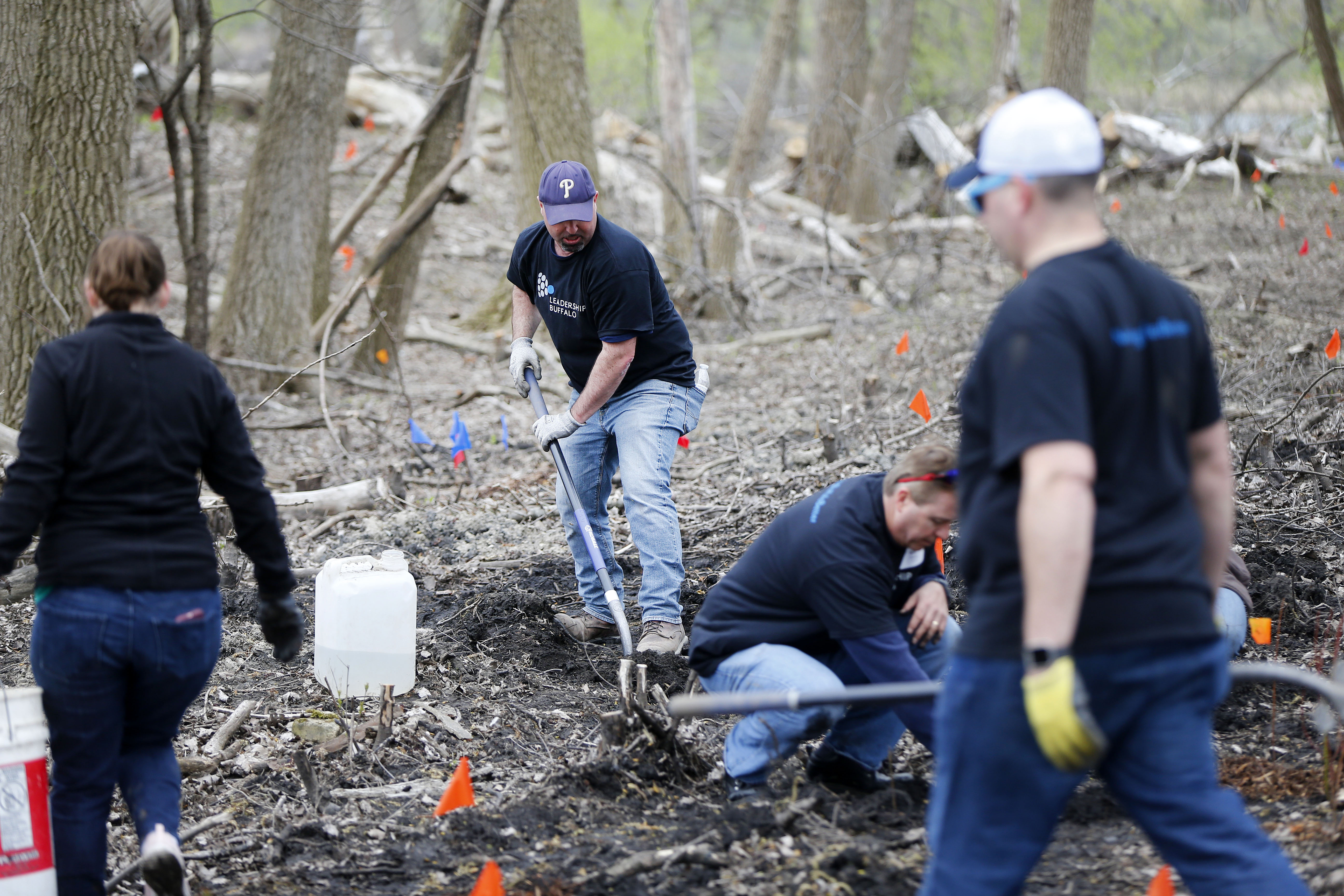 Leadership Buffalo volunteers plant in a 60,000-square-foot area of Tifft Nature Preserve in Buffalo on May 11. (Mark Mulville/Buffalo News)

Planting thousands of trees and shrubs across 6 acres is one big job.

And expensive, unless you have a lot of help.

Tifft got an infusion of free labor last week when about three dozen Leadership Buffalo alumni planted more than 450 oaks, junipers and other native shrubs and saplings.

They were the first in what's expected to be a gaggle of school groups, businesses, organizations and individuals signed up to volunteer many hours at Tifft this spring and summer planting at the seasonal wetland site.

“I need to get everything in the ground by October,” Goodrich said.

One by one, bookkeepers, insurance agents and construction managers climbed inside a fenced-in enclosure of the demonstration area on the afternoon of May 11.

Inside, they found rows of potted shrubs and trees were organized by species and a laminated grid mapping the project area.

Every spot on the grid that needed a plant was marked in the ground with a small orange flag.

Then, the volunteers went to work.

Ritz said she’s visited Tifft since she was a girl. When presented with the chance to trade the office for shovels and dirt, she took the day off.

“It was a no-brainer for me,” Ritz said. “Your work in the community can be equally important.”

In a single afternoon, Leadership Buffalo’s volunteers planted nearly 10 percent of the 5,000 estimated plants that will comprise the new habitats at the three seasonal wetlands.

“It’s our environment, and it’s very important,” said Althea Luehrsen, Leadership Buffalo’s CEO. “We have a great renaissance going on here, but there’s still a lot that needs to be done.”

Luehrsen added: “This is our mission: to make Buffalo better, any way we can.”