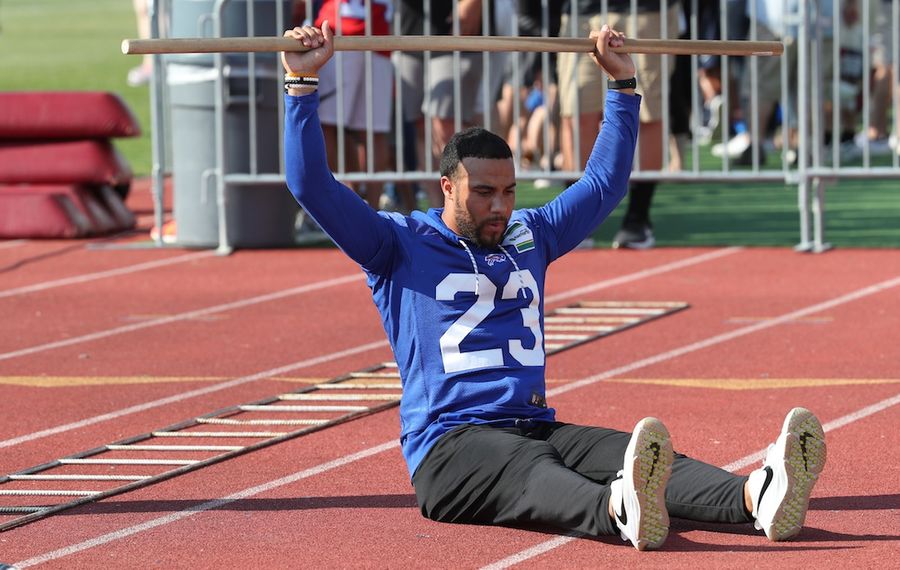 Coming off career highs in interceptions and tackles, Bills safety Micah Hyde was voted among the NFL’s Top 100 players by his peers for the first time. Hyde is ranked at No. 62.

“It’s a blessing,” Hyde said Tuesday on the NFL Network's "Good Morning Football." "It’s awesome to be a part of this list with all these great players. Now I have to work my way up this list, for sure.”

Hyde touched on a number of topics during the interview:

On Buffalo: “To make my way to Buffalo and be welcomed with open arms, I love this place. They gave me the opportunity to shine and do what I love to do every single day. The coaching staff is awesome with coach McDermott running the ship.”

On whether this is the year the Bills knock off the Patriots: “When Sean got here, he made it clear that we don’t worry about anything else. We worry about ourselves. One of the best things he did last year was take it game by game. Everyone around the league knows for the last 10, 20 years, the New England Patriots have been dominant. They have a great coach, a great quarterback and guys that go about their business and just play football. You have to respect those guys, but at the same time, we go about our business. We handle what we have to do in our facility and in Orchard Park, and from there it takes care of itself."

On how he was able to have a bigger impact in his first year in Buffalo: “Sean came in and with his leadership, he was able to get guys motivated myself included. Leslie Frazier being a great defensive coordinator. My position coaches, the guys I play with. Those guys I play with in the back don’t get enough credit – Tre’Davious White, Jordan Poyer. They go out there every day and compete and I think people are starting to recognize those guys also. We have some guys in Buffalo who are starting to make a name for themselves and the team in general. We are trying to climb up the charts, and the secret is to climb up the charts and make something happen.”

On the trade of Tyrod Taylor: “There was some stuff that happened mid-season when we traded some guys and in the beginning of the season, we got rid of some guys. It’s all part of coach McDermott’s game plan. We sit back and let him do what’s best for the football team. Tyrod is a great player for us and we appreciate everything he did for us. The people around here loved him. He was the quarterback that led this franchise to the playoffs for the first time in a long time and did an awesome job. It’s part of the process and Sean McDermott’s plan and we just sit back and see what he can do for us.”

On Josh Allen: “I’m looking forward to seeing what he can do for this football team. The first time I saw him at the complex was yesterday and he was playing ping pong against our chaplain. … The chaplain was winning at that time.”