WELLSVILLE — A dozen years ago, Lynn Richmond was working a “dead-end job” here in Wellsville, the rural Allegany County village with fewer than 5,000 residents, where the heart of Main Street is six blocks long.

Richmond, who is 43, heard that Dresser-Rand Corp. was hiring. Landing a job at Dresser’s Wellsville plant – which manufactures the steam turbines used in Navy aircraft carriers, among other products – has been the goal of generations of Allegany County residents. With a healthy hourly wage, union protections and ample opportunity to work overtime, it was a place where you could set yourself up for decades, working straight through to a pension-backed retirement.

Richmond spent six months pursuing a position, through interviews and tests. “I still remember the day they called me to offer me a job,” she said. “I was ecstatic, because it was the best place in Wellsville to work.”

Today, that joy is gone, and within a couple of years, so, too, may be her job at Dresser-Rand. In February, Dresser’s parent company, the Siemens AG of Germany, announced the Wellsville plant will close in 2020. The closing was announced along with the sale of Dresser’s government business to North Carolina-based Curtiss-Wright, which maintains a small operation in Wellsville that also is expected to close in the next two years.

All told, more than 250 workers may lose their jobs, many of which are high-paying and nearly impossible to replace in Wellsville or nearby towns. The local International Association of Machinists union, which represents Dresser-Rand’s workers, estimates by salaries alone, the closing will take $20 million out of the Wellsville community.

“Right now there are two grocery stores in the Village of Wellsville, which there will probably not be in a couple of years,” said Ron Warner, business representative for the machinists union across upstate New York. “You can’t take that kind of money out of that area and expect it to be day-to-day business.”

Warner was in Washington, D.C., this week with Jim Lewis, president of the local union in Wellsville, meeting with congressional representatives to plead Wellsville’s case. Politicians are listening: Sen. Charles Schumer and Sen. Kirsten Gillibrand, both Democrats, have reached out to Siemens and asked the company to reconsider. Gov. Andrew Cuomo, also a Democrat, has pressed the company, too. Rep. Tom Reed, a Republican whose expansive rural district includes Wellsville, is also pushing Siemens, Curtiss-Wright, and the U.S. Navy, which is one of the Wellsville operation’s most significant customers.

“My top mission is to scream from the mountaintops and put as much pressure as possible on the decision-makers that are there to try to change their decision,” Reed said in an interview Friday. “I don’t want any expectations to be raised out there, because it’s going to be a difficult path, but the only chance we have is if we speak together in one voice to say, ‘This is an unwise decision.’ ”

It’s a decision that is causing workers like Richmond to reconsider, and possibly reinvent, their careers. “When I got the job here, I truly felt this was it,” she said. “I was going to retire here with a good pension.” 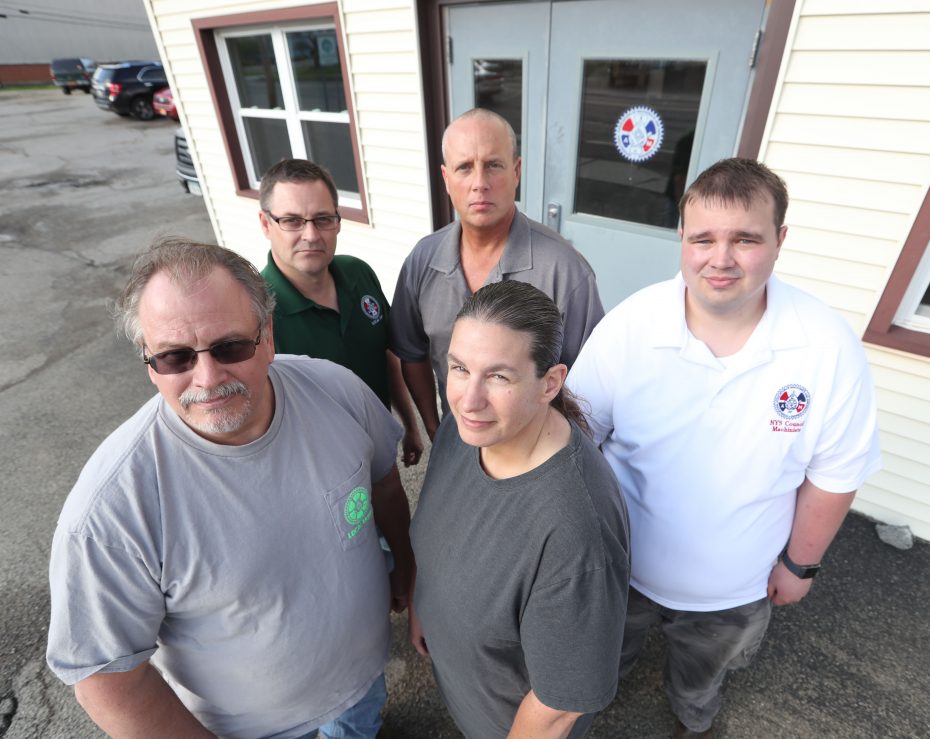 On Thursday, Richmond and four of her colleagues headed to the machinists’ union hall when their factory shift ended at 3:30 p.m. On a  summery day, they still wore the jeans and heavy footwear that protects their legs and feet on the plant floor. The bright afternoon was contrasted by somber conversation.

“After the shock wore off, I guess we’ve come to terms with it,” said Todd Dickerson, a 49-year-old mechanic. "We like this idea that they’re fighting. Personally, in my opinion, it’s all for naught.” 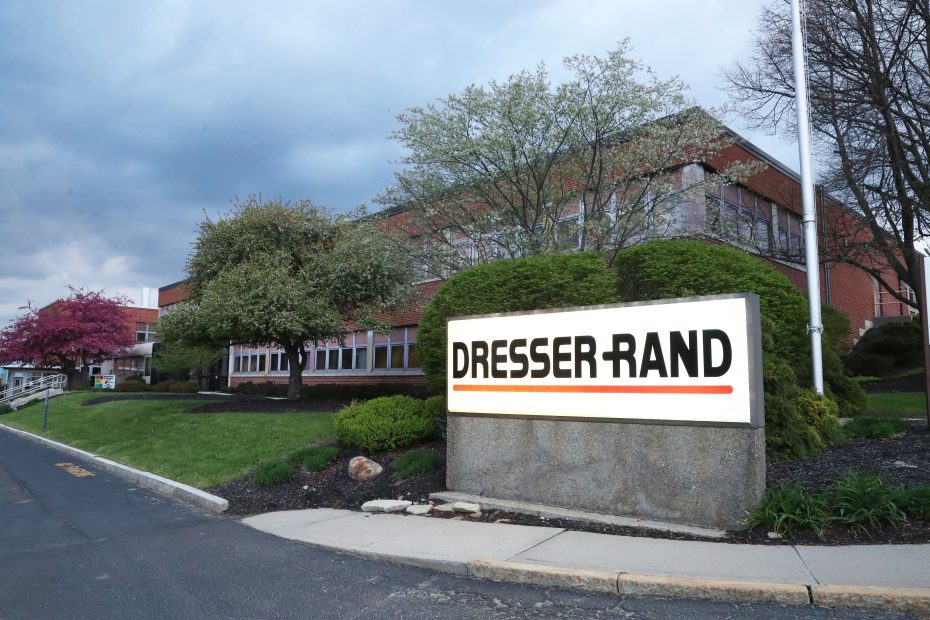 While Gov. Andrew M. Cuomo and other elected representatives have made pleas to save Dresser-Rand, a Siemens spokesman reaffirmed the plant will close in 2020. “While critical work continues at the site today, planning is underway to gradually transition work away from the site as previously announced,” the official said. (Sharon Cantillon/Buffalo News)

He may be right. In an emailed response to questions from the News, a Siemens spokesman reaffirmed that despite politicians’ pleas, the plant will close in 2020. “While critical work continues at the site today, planning is underway to gradually transition work away from the site as previously announced,” the official said.

The official also wrote: “Employees have been and remain our primary focus.” But the employees gathered around a table in the quiet union hall begged to differ.

“Over the years we’ve given a lot of things, and done a lot of things, to keep this company solvent for the future, to build the future for here in the community,” said Brad Jadwin, 59, a machinist who has worked at the plant for 31 years. “Now, it’s like, ‘What was it all for?’ ”

Bryan Fanton, a 52-year-old mill operator who started at Dresser-Rand three decades ago, pointed out that in 2006, the union accepted an approximate one-third cut in wages and benefits to keep the Wellsville operation viable. “And now it’s like, ‘Why did we do that?’ ” he said.

Many of the workers gave up their retiree medical benefits, which complicates their next step. With 30-plus years of service, Dickerson, Fanton and Jadwin are all eligible to retire and draw from their union-backed pension plan. But none are even 60, and thus won’t be eligible for Medicaid in the near future. They’ll have to find work simply to receive or pay for medical benefits.

For younger workers like Lynn Richmond and Jarred Fanton, who is Bryan Fanton’s 31-year-old son, the reality is harsher. 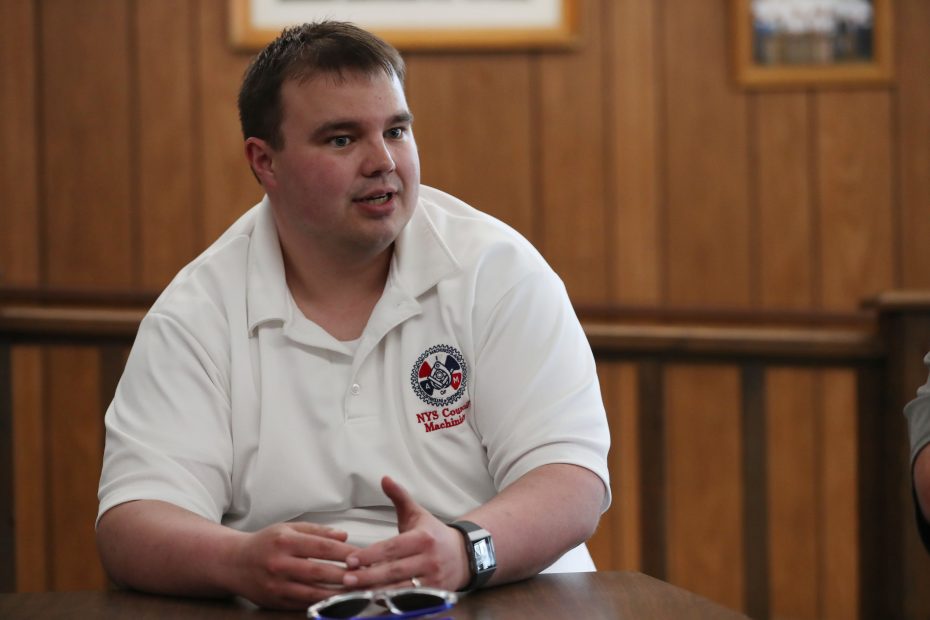 “I guess the feeling is numb,” said Jarred Fanton, 31, who has worked at Dresser for 12 years. He has five years paid into the mortgage on his home, and four months ago, his wife, Jennifer, gave birth to their daughter Amara. (Sharon Cantillon/Buffalo News)

“I guess the feeling is numb,” said the younger Fanton, who like Richmond, has worked at Dresser for the last 12 years. He has five years paid into the mortgage on his home, and four months ago, his wife Jennifer gave birth to their daughter Amara. He grew up here in Wellsville, as did his father and grandfather, and he hoped his daughter would, too.

Fanton's job at Dresser-Rand was supposed to ensure that. But now he’s unsure what’s next.

“The whole plan was to stay here,” Fanton said. “I like it here. But it’s the reality of, ‘Do I stay here and go backwards, or do I move on and move away?’ ”

Most of the workers soon to be displaced by Dresser-Rand have a marketable skill set. There’s a dearth of skilled laborers and manufacturing companies from Buffalo, Rochester, Syracuse, Auburn and even as far away as Newport News, Va., lining up to hire them.

But that’s only if the workers are willing to move. Union jobs, according the most up-to-date figures available from the International Association of Machinists local, pay an average of $22.87 an hour. Few other hourly jobs in Wellsville will come close to that.

“You’d have to work two or three jobs to earn the income that we make now,” Richmond said. “I don’t really want to move, but if I don’t have a choice, I will.” 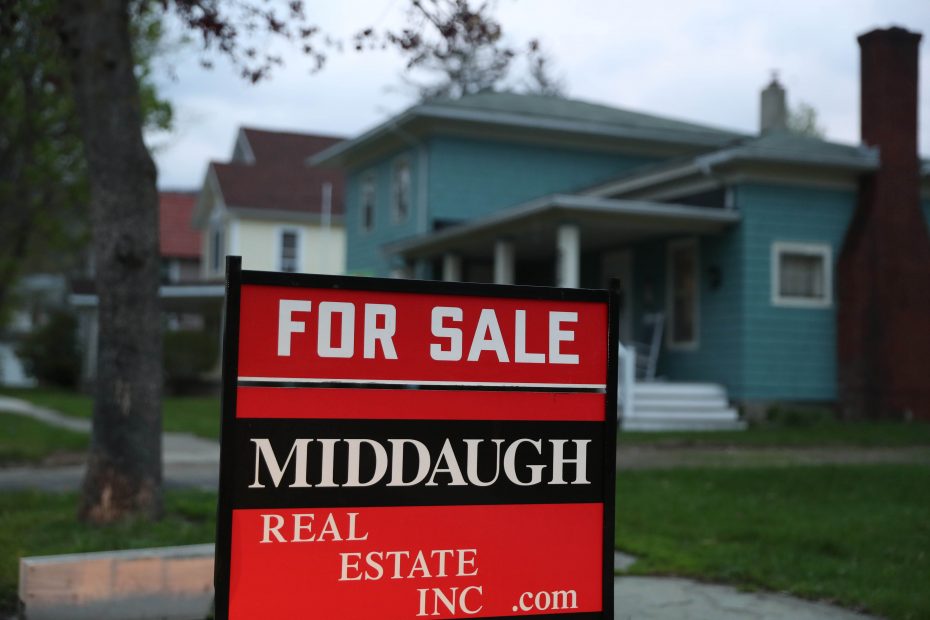 Multiple Wellsville workers and residents said they have seen an uptick in “For sale” signs around town. (Sharon Cantillon/Buffalo News)

Multiple Wellsville workers and residents interviewed for this story said they have seen an uptick in “For Sale” signs on yards around town. The Dresser-Rand union workers noted that some executives have already gone.

A two-minute drive down Main Street from the union hall, Randy Shayler was visiting with a newlywed couple who are investing more than a half-million dollars into converting a former Pizza Hut restaurant into a bar and grill. Shayler, a Republican, is nearly 18 months into his first term as village mayor. “Some may say the sky is falling, but that’s not the case,” said Shayler. “There’s plenty of blue sky over Wellsville.” 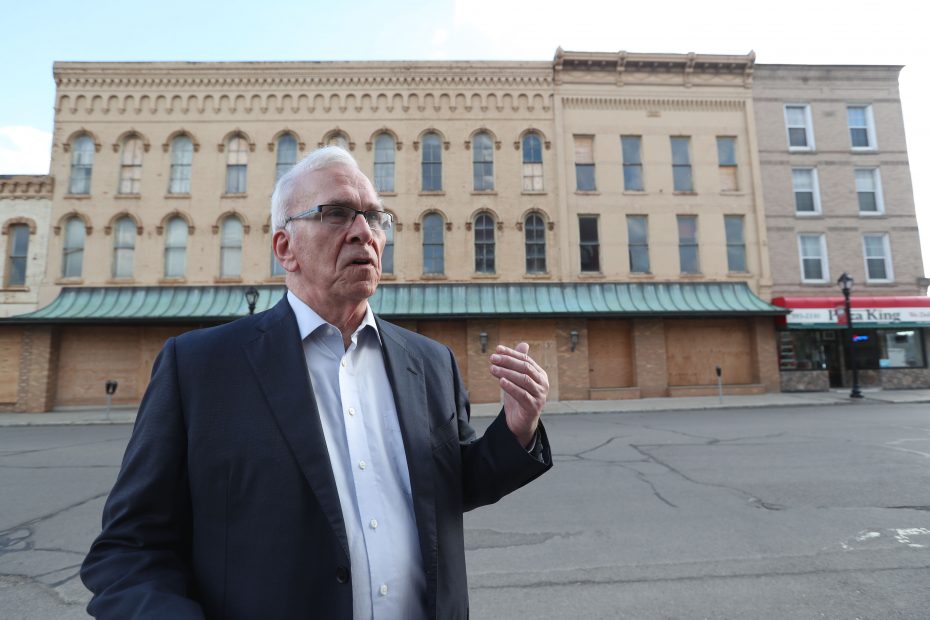 “Some may say the sky is falling, but that’s not the case. There’s plenty of blue sky over Wellsville,” says Republican Wellsville Mayor Randy Shayler, pointing out a $10 million senior housing project on Main Street (Sharon Cantillon/Buffalo News)

Shayler, in an effort to boost confidence and beckon business to Wellsville, is eager to point out any blue sky among the clouds. One is a $10 million senior-housing project on Main Street. Another is this restaurant-to-be: David Drury and his new wife Anna Joyce-Drury purchased the Pizza Hut site in mid-December. They plan to invest up to $600,000 to turn it into the Still Water Pizza and Grill, a spinoff of the popular Still Water Inn that David Drury owns in nearby Belfast.

They hope to open the restaurant, which will employ around 20 people, in early July.

“I don’t think that we’ve ever felt differently, or any sort of buyer’s remorse, having heard the Dresser announcement,” Joyce-Drury said. “It’s certainly a sad development for the community."

Joyce-Drury, who is 29, is a Wellsville native who has lived here her entire life. She is the general manager of the Wellsville Country Club, which is next to the Dresser-Rand facility and counts many employees among the members.

“There are two schools of thought, and they are very different: There’s hope, and then there’s ‘ghost town is coming,’ ” she said. “I try not to entertain one of them.”

“The failure of Wellsville is not an option, in my mind,” she said. “We’re going to push on.” 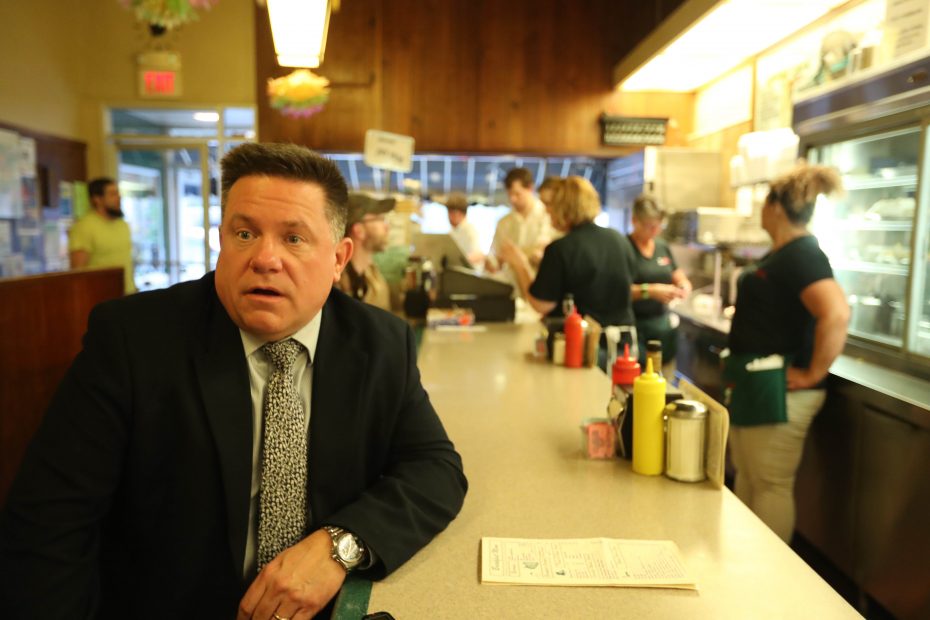 It’ll be a tough push. The Wellsville Central School District, which has 1,275 students, is preparing for a drop in enrollment, which impacts state aid, as people move out of town over the next two years.  “It’s pretty devastating to the community,” said School Superintendent David Foster, sitting at the diner counter inside the Texas Hot — or, as locals call it, “the Hot.” Foster was a teacher in the district, and then business administrator, before his appointment as superintendent. He replaced himself with a former Dresser-Rand executive, Emily Peavey, as the district’s business executive. He points to her as an example of the type of talent Dresser-Rand brought and nurtured in Wellsville.

Looking to the future

Reed, like other elected officials, is professing publicly to not be giving up on the possibility of reversing Dresser-Rand’s exit. “Don’t lose sight of the Navy’s influence here, because these are serious national security concerns,” he pointed out, telling a story about an aircraft carrier that was stuck with a malfunctioning part near the Philippines. The part was flown to across the world to Wellsville, where it was fixed and sent back.

“Only the people in Wellsville – the men and women that work there – were able to do that job,” Reed said.

While the congressman uses his bully pulpit, the Wellsville community and Dresser-Rand workers are on a search for what’s next. Union members are hoping that Siemens will allow them to transfer into open positions – if any are available – at facilities in nearby Olean and Painted Post. Mayor Shayler and other community leaders are examining potential re-uses of the Dresser-Rand site, which could be a company moving in, or dividing it into smaller spaces for several entrepreneurial operations.

In the meantime, operations continue in Wellsville. The workers show up each day, do the jobs they have done for decades — the jobs they hoped to do for decades more. “The anger has kind of worn off,” Jarred Fanton said. “It’s more numb. (It’s) status quo until I’m told not to come back anymore.”