It's not just magnolias and cherry trees that are finally blossoming in this delayed-onset Buffalo spring.

Public art is blooming, too, and the first bright buds of a summerlong profusion of art are set to emerge this month with the commencement of three high-profile mural projects on Hertel Avenue and the East Side.

As part of the Albright-Knox Art Gallery's busiest season of public art yet, a team of artists from the local design firm White Bicycle will begin transforming a building at 1260 Hertel Ave. into a community-centric mural. At the same time, longtime friends and artistic collaborators Chuck Tingley and Matthew Grote will fuse their styles on a large wall at 1503 Hertel.

The Polish artist Otecki, known for his graphic pieces melding abstract shapes and traditional figures, will soon arrive in Buffalo to begin a large-scale mural on a building at 617 Fillmore Ave., near Torn Space Theater.

These three murals are teasers to a broader effort by the Albright-Knox public art team and its lead leader, curator Aaron Ott, to pepper Erie County with so many works of painting, sculpture and installation that art becomes an expected part of everyday life.

"Now that spring is finally here, our AK Public Art Initiative is kicking into high gear," Ott said in a statement. "This is just the start of many exciting projects to come over the season that will place a variety of artwork throughout the city and county."

Both of the projects thrive on teamwork.

A new mural designed by White Bicycle will soon appear at 1260 Hertel Ave. as part of the Albright-Knox Art Gallery's public art program.

The first, conceived by a six-person team at the local design firm White Bicycle led by Kyle Morrisey and Brian Grunert, will feature a boldly colored design based on the North Buffalo streetscape as if rendered in stained glass. If you look closely, you'll see a secret message hidden in the graphic streetscape: the word "We."

"It's at the corner of Commonwealth and Hertel, and there's something poetic about this notion of 'commonwealth' as an echo of this City of Good Neighbors," said Grunert, founder of White Bicycle. "We're calling the piece, 'We Are Here,' a play on this notion of placemaking. We're widening it out to be a joint statement of presence, something that's meant to be welcoming of the diversity that has historically grown from that neighborhood."

The selection of a local design firm, rather than an individual artist or team of artists, represents an attempt by Ott and the Albright-Knox to tap into Buffalo's active design community.

The process of creating the White Bicycle mural, Grunert said, was a team effort that involved all six of the agency's staffers: Grunert; Morrisey; Casey Kelly; Holly Norris; Brittney Sikora; and Meagan Walker.

Chuck Tingley and Matthew Grote are collaborating on a bold mural at 1503 Hertel Ave. that fuses their unique styles.

As for the new piece by Tingley and Grote, whose collaboration can be traced back to an important 2010 mural on the side of 515 Main St., the collaboration is more about fusing two completely different artistic approaches to create a unified style.

"What we really tried to do is blend our styles seamlessly together in a way that we've never done before," said Grote, a former Buffalo resident now based in Cincinnati. "We worked back and forth sending sketches and drawing over each other's work, trying to create something that has an identity of its own that's hopefully greater than just his work or just my work."

The scheme they came up with, Grote said, involves a surreal balloon festival and a Rubik's Cube with three visible sides, replete with symbols and tied up with notions of cultural identity.

"What our mural really speaks to is about how our identities also come from culture," Grote said.

From Poland to the heart of Polonia 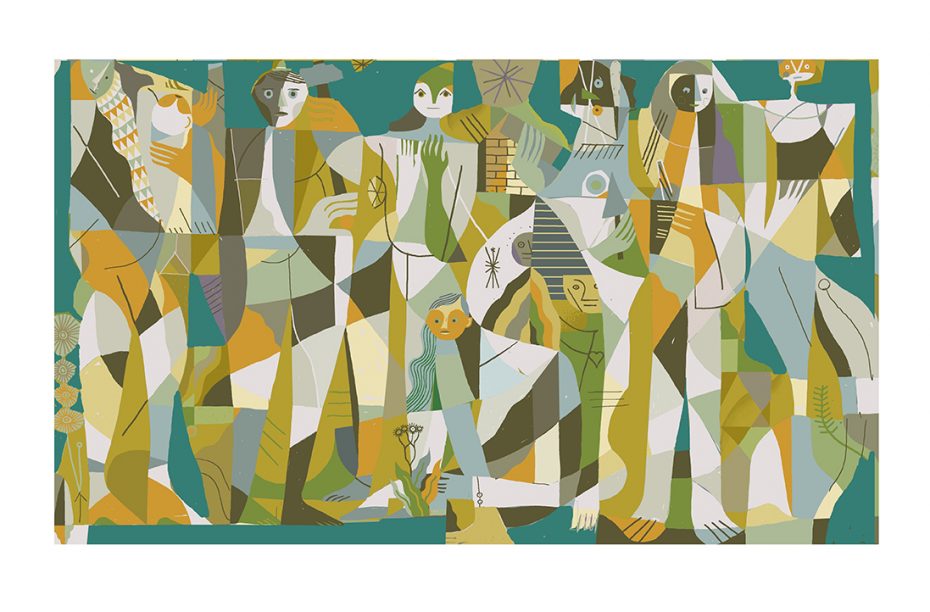 A new mural by Polish artist Wojciech Kolacz (known as Otecki) will soon go up on the side of a building at 617 Fillmore Ave.

The young artist Wojciech Kolacz, based in the Polish city of Waroclaw, has made a name for himself by developing a highly individual style that fuses elements of cubism with figures and creatures drawn from his own imagination.

"As a boy, he dreamed of fantastic forest creatures and was afraid of them. Now, he draws from those childhood images," according to an artist statement on Otecki's website. "He often presents dualistic worlds and characters: human-animal combinations."

Otecki's work was chosen specifically for this historically Polish neighborhood, which is also home to the Torn Space Theater and the Adam Mickiewicz Dramatic Circle and Library, and another mural installed last year at Broadway and Fillmore Avenue by Keir Johnston and Ernel Martinez.

The creation of the murals is expected to take at least a week, and residents are encouraged to watch the process unfold.

"Come out and see us and stop by to say hello," Ott said, "as we work to make our community an even more beautiful place."