You go to see a group of talented young musicians playing jazz in a Buffalo club. One minute, they're burning through a tried-and-true jazz standard with a swing beat. The next, they're improvising over a groove that sounds like something the late hip-hop pioneer J. Dilla might have crafted.

An MC is suddenly on stage, dropping a freestyle flow against a searing, searching saxophone solo. Depending upon your age and the degree to which you've been paying attention, you likely either find this thrilling or alienating. Perhaps you even asked yourself, 'Is this jazz?'"

Things have changed. And as ever, that change is being spearheaded by the young.

Jared Tinkham is one of the most accomplished young jazz guitarists in Buffalo. With his own trio, as a member of the jazz/hip-hop/funk free-form freak-out Radarada, or as a guest with various ensembles, Tinkham has had a front-row seat as local hip-hop artists began working with bands, and jazz musicians learned to adopt hip-hop's grooves and rhythmic structures. He's found it all to be thrilling.

"I think the fact that more hip-hop bands are using live rhythm sections is great for both hip-hop fans and musicians," said Tinkham, who teaches music and classical guitar at the Buffalo Academy of Visual and Performing Arts. "For musicians, I think it proves that hip-hop doesn’t have to be strictly for MCs and DJs. Now that hip-hop groups are featuring live musicians, it shows that musicians are not only capable of emulating the samples hip-hop uses, but also are able to contribute a new layer and can take the music in an entirely different direction.

"Live remixes and improvised interpretations/re-harmonizations at a concert are such a cool idea. The audience members get a whole different kind of experience. A live drummer as opposed to a drum sample will always be felt more by the audience, in my opinion. The band can improvise and play off of what the rappers are doing, making every single concert a completely different experience." 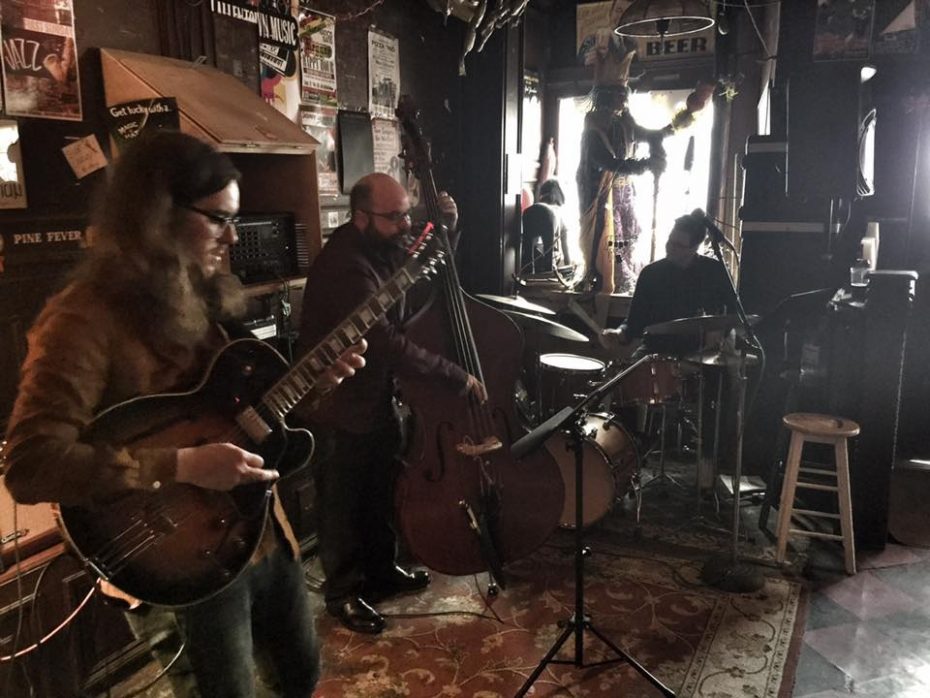 The Jared Tinkham Trio performing at Nietzsche's in Allentown. (Photo by Jeff Miers)

A group of young musicians attended a show by keyboardist and band leader Robert Glasper at Tralf Music Hall in 2012. The experience was a game-changer.

"Jazz needs a wake-up call," Glasper said then. "With the older generation of listeners, there's a disconnect there that just is not going to be an easy thing to get past. But with kids, well, it's a different story. They aren't carrying all of this baggage, so they are more likely to accept hip-hop intermingling with jazz. That's my main thing – to get the younger people into it, because they are the ones who will carry the legacy of jazz forward in new and exciting directions."

Today we can call them Glasper's children, as they've become professional musicians for whom the marriage of hip-hop and jazz is a natural fusion, thereby fulfilling Glasper's mandate to move jazz forward.

From Buffalo to the Berklee College of Music and back, a new generation of musicians considers hip-hop a legitimate part of the jazz vernacular. Most of them cited the Robert Glasper Experiment in general and the group's "Black Radio," in particular, as deeply significant in this regard. But did Glasper and Co. change the game, or were they just picking up on something that was already in the air?

"I think Glasper is one of the definitive voices of his musical generation and 'Black Radio' is a very important album to musicians and fans who take this kind of music seriously," said Buffalo saxophonist and band leader Jon Lehning. "I’m not surprised by the influence that album had on countless musicians, including myself. However, Glasper definitely did not originate the movement, nor is he the sole proprietor of it today. What makes him so important and impactful is that he is one of countless entries in a lineage of musicians looking to reflect the world that surrounds them."

Lehning raises a valid point. Hip-hop artists have sampled jazz recordings from the beginning, but the first time many listeners heard a mash-up of jazz and hip-hop that truly reflected the zeitgeist was in 1993, when rapper Guru's "Jazzmatazz" came out. It was shocking, at the time, to hear jazz harmony melded to rhythmic poems and urban grooves. Today, it's not shocking at all. What happened?

Trumpeter Brownman Ali, who lives in Toronto but is well-known to Buffalo audiences through performances by his Brownman Electryc Trio, Gruvasylum and various solo appearances, is not surprised this new generation of musicians is so eager to marry hip-hop and jazz.

"Evolution happened," said Ali, who replaced jazz legend Donald Byrd in Guru's Jazzmatazz in 2006, a position he held until Guru's death in 2010. "It all makes sense, when you look at the history of hip-hop. 'No More Mr. Nice Guy' was the debut recording for Gangstarr and when that record dropped in 1989, it was laden with jazz samples.

"From the Ahmad Jamal Trio to Dizzy Gillespie to Charlie Parker to Ramsey Lewis, the sound of jazz was being embedded in the sound of early Gangstarr. History, at this point, recognizes Guru's Jazzmatazz as the first true amalgamation of jazz and hip-hop. I came up in Brooklyn, watching and listening to all this with great excitement – my own musical background being equal parts jazz and hip-hop.

"Imagine being a young jazz musician and lover of hip-hop and suddenly your jazz heroes are making appearances as improvisers next to your favorite hip-hop giants? We all lost our minds." 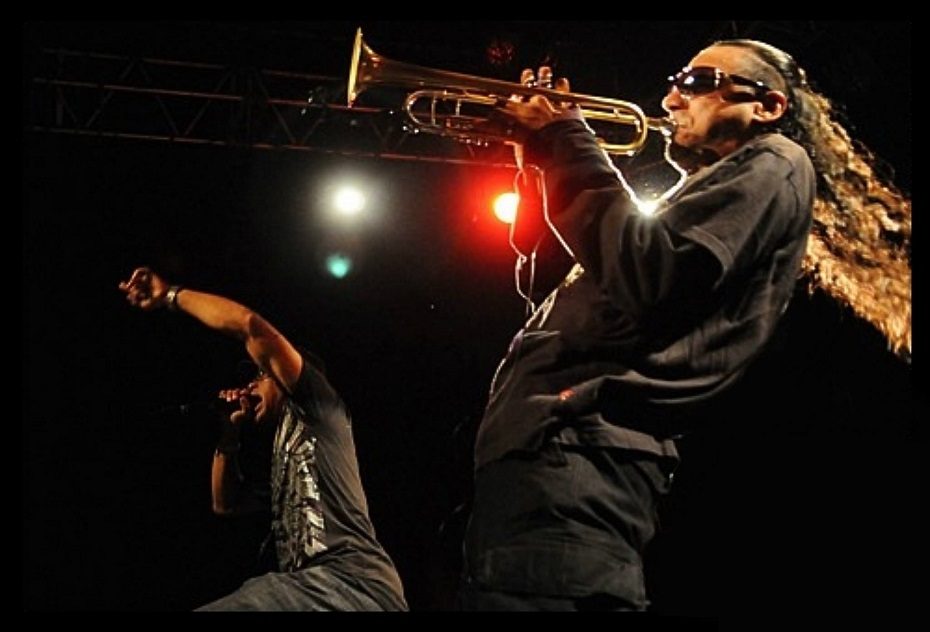 Trumpeter Brownman Ali with the late rapper Guru, who is credited as one of the progenitors of the hip-hop/jazz hybrid. (Photo courtesy Brownman.com)

"There has been a change, but it's not as drastic as we think," said Buffalo rapper Mad Dukez, born Mamudu Belkoro Kargbo. "Hip-hop has always been known for its jazzy rhythms and samples of jazz recordings. Artists like Stetsasonic, Kool Herc and Afrika Bambatta were credited with using live bands in their performances in the '80s. So when Guru, being the incredible artist he was, carried the torch into the new millennium, his skill took the world by storm. "

'Far beyond just a music genre'

Mad Dukez was a prime mover in the creation of the first hip-hop/jazz mash-ups in Buffalo when, as a member of the Type Relevant collective, he took part in the now legendary weekly series of rap-jazz-funk freestyle gigs and jazz-inflected DJ sets at the former Blue Monk on Elmwood Avenue.

How jazz has grown as a result of the infusion of hip-hop into its language? Is it a positive progression, or is there a downside?

"When it comes to music's evolution, I don't believe there can be a downside," Mad Dukez answered. "Jazz and hip-hop are both bigger than the sum of their parts. From that perspective, there can be no upside or downside, as any addition furthers the art."

Singer Drea D'Nur – the woman behind "The Spirit of Nina," a local celebration of Nina Simone – said the hip-hop/jazz marriage is a logical outgrowth of African-American culture.

"Ideally, hip-hop uses jazz as a platform for a larger conversation about social issues and the conditions of black people," she said. "Both styles of music grew out of the black experience, which is why there is so much pain, passion, beauty, and strength in the sound. Hip-hop introduced a new generation to jazz greats. Hip-hop, just like jazz, is far beyond just a music genre – they are both cultures." 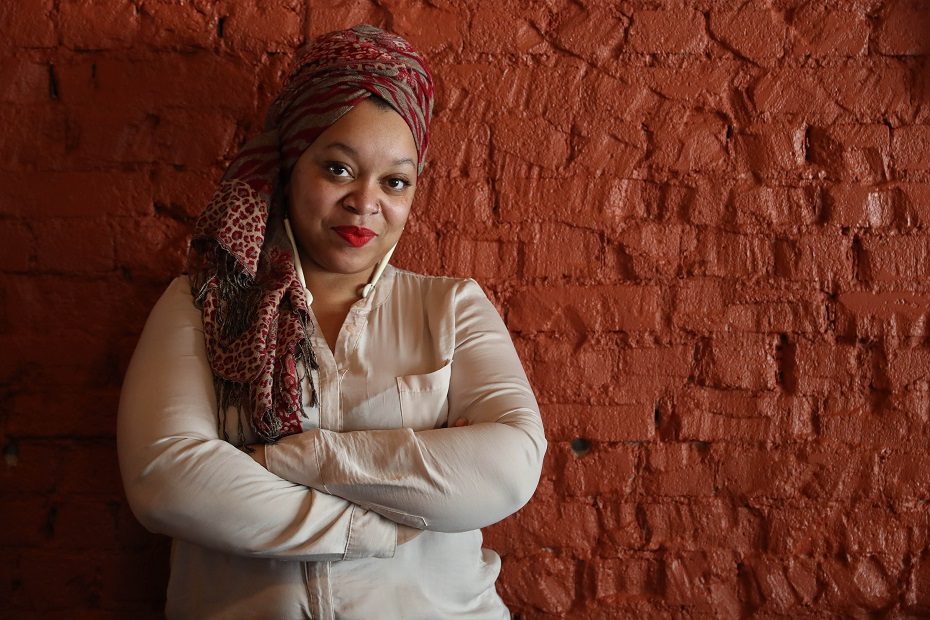 "I'm an evolutionist, not a traditionalist, so I believe the infusion of all art forms into jazz represents the natural evolutionary progression of the art form. I think these collisions and cross-pollinations are magnificent examples of how jazz continues to be the music of tomorrow, and I don't see a downside."

That said, change can be a frightening proposition for the old guard, many members of which have been turned off by the music's evolution since it broke its allegiance to swing beats and started incorporating elements of funk, R&B and rock, in the late 1960s. For these traditionalists, hip-hop has no place in jazz, and anything that doesn’t swing is tantamount to heresy.

"The traditionalists sound stupid," said Mad Dukez. "Steak is steak. Flank or Kobe, massaged or not, it's all still cow. Both art forms come from African-American roots and attempting to separate them is splitting hairs.

"Unfortunately, opinions like that 'heresy' comment slow what could be a promising evolution in music overall. Jazz music has a strong black culture, just like hip-hop. They can't be separated from one another, as one is the origin of the other. They're intertwined."

Lest the old guard get the impression that young players comfortable with the hip-hop/jazz union have not bothered to learn their history, it should be noted that all of these musicians have deeply immersed themselves in the craft that is jazz. They're not simply playing fast and loose with history, as Lehning explained.

"Look, Cannonball Adderly's  'Them Dirty Blues' (1960) is why I started to take the saxophone seriously and I still draw knowledge, vocabulary and inspiration from the figures of years past for my own playing," he said. "But there is a direct lineage from the eras past that leads you to exactly where we are today and where we’ll go, moving forward. For those who don’t look forward, time has already left them and their antiquated opinions in the past."

The history of jazz-rap in 10 albums

How will all of this play out in the future? Just as jazz changed forever in the late '60s, it seems unlikely the music can ever ignore hip-hop’s influence again. But is the converse true? Will elements of jazz always be part of hip-hop moving forward?

"The culture of hip-hop was inspired by jazz and is a new form of it," D'Nur said. "The only downside is when the older generation refuses to allow a newer one their own expression. We must listen to one other. You’ll find that the conversation is the same. It’s the conversation about who we are as a people, how we see ourselves and the world as it is and as we want it to be."

Tinkham is convinced that, ultimately, the music will dictate its own course.

"There will definitely be hip-hop musicians who disagree with the idea of using a live band, or incorporating jazz elements, just as there will be plenty of hip-hop musicians who feel the exact opposite," he said. "In the end, I think the entire situation sheds light on how musicians can be brought together, regardless of genre.

"This is how new directions in music are created."