A proposed athletic complex on Elk Street overcame vocal opposition from a corporate neighbor, winning its last formal city approval despite intense lobbying against it by a chemical company fearful of "soccer moms" and others complaining about odors.

The Buffalo Planning Board gave its assent to the $3 million project by Jon Williams' South Buffalo Development to create a new Downtown Sports Center at 427 Elk, using about six acres of vacant land that has already been remediated under state supervision.

That clears the way for Williams to start work on the project, which he hopes to complete and open by the end of the year.

"We'll be starting right away to get the final approvals in place and the permits ready to go," said Williams, owner of Ontario Specialty Contracting.

The proposed new complex will include an indoor field house as well as an outdoor athletic turf field, for a variety of sports like soccer, lacrosse or kickball. It will also have a snackbar, restrooms and showers. It's aimed primarily at high-school, college-level or adult sports teams, with Medaille College as the lead potential user under an agreement that is being negotiated.

That's what drew the opposition of PVS Chemical Solutions Inc. The Detroit-based company, which operates a sulfuric-acid manufacturing facility at 55 Lee St., adjacent to Williams' property, raised a stink about the proposal, which it termed inappropriate for one of Buffalo's most heavily industrial corridors. PVS said the recreational nature of the project conflicts with the manufacturing activities and existing companies already operating there.

The company, which employs 50 and has operated on the site since 1981, has stressed that its own operations are safe, but warned that bringing more people to the site would only expose them to the sights, sounds and smells that come with a chemical plant. In turn, that could jeopardize its own business there, by exposing the company to more criticism, while raising concerns for regulators.

"We're hopeful that this project won't have any negative impact on the continuing operations of PVS," said Corey Auerbach, an attorney representing PVS. "PVS is going to do and continue to do everything in their power to continue to operate a facility to the highest standards."

The objections by PVS, which surfaced two weeks ago, prompted the Planning Board to table the matter at its last meeting, directing the two sides to negotiate a solution. PVS officials expressed a willingness to fly in from Detroit to meet with Williams, but the two sides ended up in a teleconference instead, and then went back before the Planning Board.

"Unfortunately, the parties couldn't reach a real agreement on how to move forward with this," said Williams' attorney, Marc Romanowski.

"It was less than productive," Auerbach agreed.

PVS wanted Williams to ideally abandon the outdoor field entirely, or to flip the field with the indoor facility to create more of a buffer between the outdoor games and the chemical plant. At a minimum, the company sought a solid wall between the soccer field and the PVS property, so that people at the sports complex wouldn't be able to see the plant.

The company even offered to help pay for the changes, to overcome Williams' assertion that the requested changes would be untenable or cost-prohibitive because of the need to run drainage and utility lines too far.

"PVS is ready to come to the table, to put money to assist and facilitate a redesign of this project," Auerbach said. "All they want, if it's going to move forward, is a site plan that limits the impact to the greatest extent practicable." 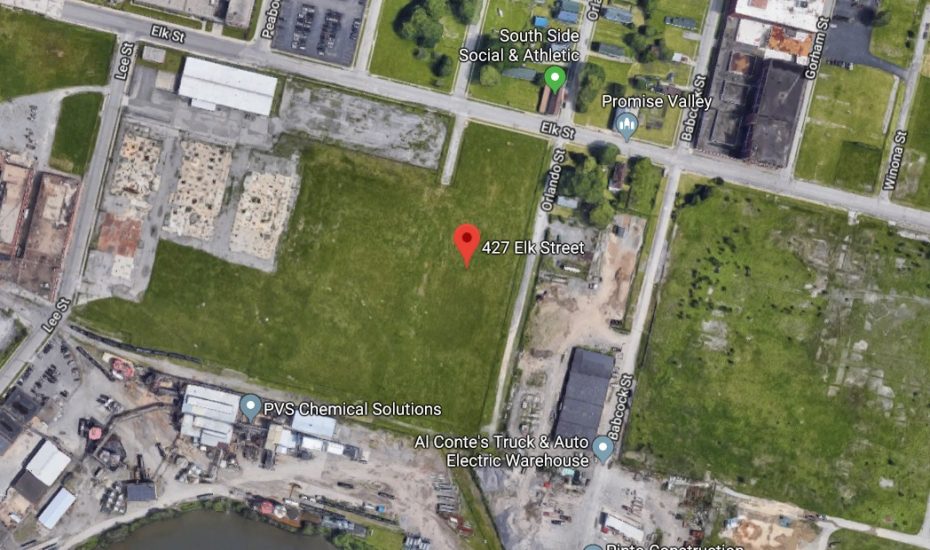 The site proposed for an athletic complex at 427 Elk St. (Google satellite image)

PVS also asked Williams to limit the use of the field to business hours, to ensure that PVS employees were around if needed. The company also wanted the developer to formally prohibit use of the facility by anyone under high school age, and to bar alcohol sales. And PVS asked Williams to locate air intakes for the indoor facility on the north wall of the building and design the ventilation system to close it off if necessary.

Williams refused to accept limitations, even though he said he does not intend to sell alcohol and doesn't expect the field to be used for younger ages. He also would not accept PVS' offer to help pay for the improvements. And he warned the Planning Board that he was done trying to accommodate PVS.

"The concept that I can't kick a soccer ball 300 feet from their fence line, but I can dock at their river wall and fish, is beyond me," Williams said. "If they have a release from their facility, it's not this facility's problem. It's the whole neighborhood. There are houses right here. There's a bar on the other side of Elk Street.

Romanowski said his client offered to screen the six-foot southern fence line along the field with green netting to hide the plant from sight. "No amount of solid wall is going to stop air," Romanowski said.

He said Williams would also provide permanent on-site air monitoring, "so if anyone had any complaints, we'd have some data on this."

"Jon's company does remediation every day, so they have the equipment to do this sort of stuff," the attorney said.

Finally, Williams agreed to distribute information sheets provided by PVS to anyone using the sports facility, and would set up a hotline to PVS for two-way communication in case of an emergency.

That was sufficient for the Planning Board, though not for PVS. Two board members, Chairman James Morrell and Horace Gioia, recused themselves from the vote because they both serve on Medaille's board of trustees.

"PVS will explore whatever the options are that are available to them," Auerbach said. "It's unfortunate that the applicant was unwilling to work with his neighbor to improve the project."

Under plans by architects at Carmina Wood Morris PC, the proposed new complex would include a 26,400-square-foot, single-story field house on Elk and an outdoor athletic field, measuring 300 feet by 300 feet, located at 85 Lee St. The project would also include a 61-space parking lot, with the capacity to add another 50 spaces if needed.

It's part of the larger 21.7-acre project at the Schoellkopf Power House, a complex across the street that is being converted into an $8 million mixed-use facility with residential, industrial and commercial space. Site work has already begun, but Williams is waiting for historic preservation approval before continuing with roof, window and facade work.

Williams had purchased the entire site at a tax foreclosure auction in 2009, invested another $3.5 million as part of a $20 million brownfield cleanup led by legacy owner Honeywell, and now plans to move his company's offices there upon completion later this year.

"It's got to get redeveloped. It's a key part of South Buffalo," Williams said. "It's really kind of the cornerstone of that entire area coming back, and to leave it vacant because there's a perceived threat of a manufacturer just doesn't make sense."

10 things to know about Downtown Sports Complex and Medaille Soccer