Buffalo-area soccer players rarely look forward to having a certain referee for a match, but Tom George has been an exception.

An air of authority, an intimidating frame and a deep, booming voice make him a strong fit for the job, but his willingness to explain calls, calmly handle combustible situations and hustle to be in position set him a cut above.

The 57-year-old is widely respected by players at all soccer levels, whether in college competition, the amateur Buffalo & District Soccer League or in the Western New York Junior Soccer League. But his plans to officiate summer soccer have been put on hold, as George was diagnosed with stage four lymphoma on Feb. 1.

While cancer can humble even the toughest characters, George is prepared to fight with courage - and a touch of humor. 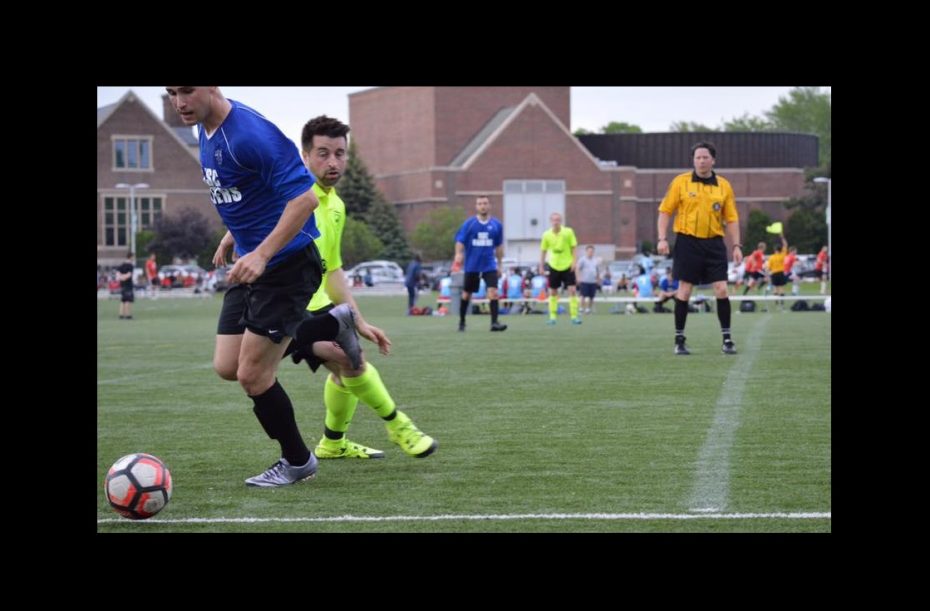 The diagnosis happened quickly. George accidentally whacked himself with a snow shovel in the abdomen on Jan. 30, causing abdominal pain and his spleen to enlarge, a warning sign to doctors that a biopsy would be necessary.

While George admits the fast-moving nature of this form of cancer is scary, mantle cell lymphoma does respond quickly to chemotherapy - "the cancer can't hide," George was told.

The first stage of battling the cancer is a series of five-day periods at Roswell Comprehensive Cancer Center for infusions, followed by just over two weeks at home, each time. According to doctors, the second stage will involve George staying at the hospital for a full month for more intensive treatment. In total, George will face chemotherapy for eight or nine months, with an aggressive bone marrow transplant procedure still to come.

While the treatment is intimidating and is accompanied by devastating side effects, George's commitment to fitness was helpful in a few respects.

"I was lifting heavy right until I went in for chemo," George said, "which was good for my mental health." But now, George continues, he's lost 25 pounds, mostly muscle mass, as a result of the three weeks of near-constant nausea and the beginning of treatments. Although these changes are tough to stomach, the referee responded with a sense of humor.

"I had two things going for me," George joked. "I had nice hair and I worked out. But then I lost both in a month." 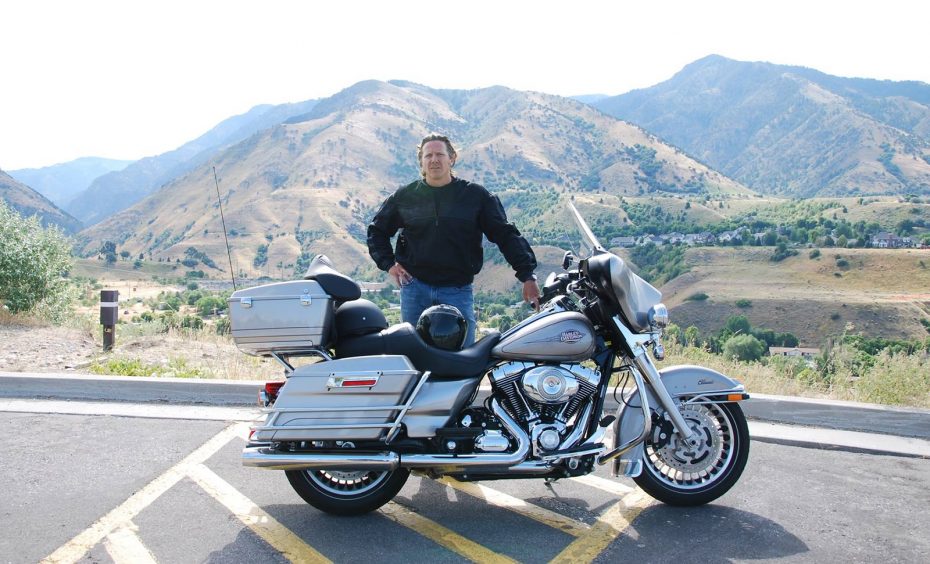 Still, George's good health may be a blessing for his fight against cancer. His doctor at Roswell said someone in George's condition could handle "the kitchen sink" of treatment, an aggressive approach that could bode well for his future.

Even so, lymphoma's attack made no sense to his close friends.

"Life isn't fair," remarked Kevin Meegan, George's friend for 32 years, coworker at Wyoming Correctional and fellow referee. "He watched everything he consumed both in terms of calories and in the health sense. He pushed his body - he went great lengths to be in great shape."

Regardless of George's near fanatical commitment to working out, cancer doesn't just prey upon the weak. It's often the strong, though, who can put up the most valiant fight.

"If I can check all these boxes [along the way], the doctor said they can guarantee me a certain number of years cancer free. I didn't know doctors gave guarantees like that," said George, finishing with a chuckle.

George is married with three kids, all of whom are now adults.

Two weeks prior to learning about his cancer, Tom's youngest, Robert, left to spend the spring semester in Copenhagen, Denmark, a trip he'd been anticipating due to his love for Europe. His father understood his son's excitement and wrestled with how to break the news.

Because Facebook Messenger was the most economical way to communicate with Robert, who was embroiled in a busy 10 days overseas, Tom was forced to lie about the diagnosis to friends and coworkers to ensure he'd be the first to tell his son.

"I wouldn't tell anyone else until he knew," George said firmly. 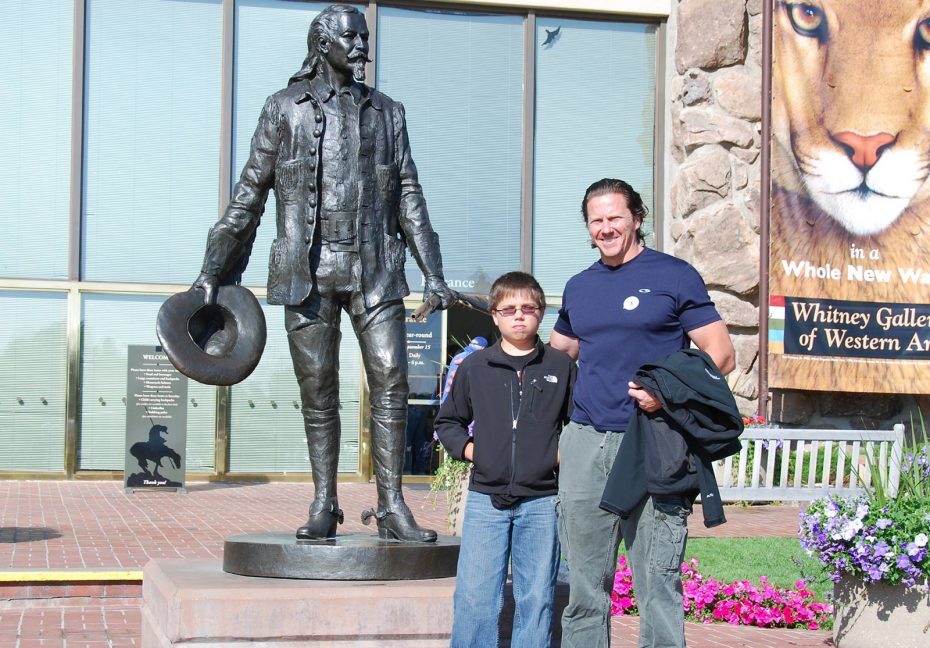 Tom George poses with his son. (via George)

After the heartbreak of telling his son the diagnosis with an ocean between them, George's next fears were directed to work at the prison and his refereeing assignments. Once George alerted his superiors at Wyoming, near the Attica Prison, of the lymphoma, he had no choice but to leave abruptly to attend to his health.

"I called in sick for three weeks straight, then had to retire right away," said, George, a corrections officer, wistfully. "I didn't get to say goodbye, and I don't know when our paths will cross again."

Wyoming Correctional was the perfect environment for refining the traits that make George a top referee. It's a position that demands discipline and a stern temperament, but leaves just enough room for kindness.

Meegan, who was recruited into refereeing by George after the two had bonded playing for local side Germania, retired from Wyoming roughly a year prior to his friend's illness. Perhaps better than anyone, though, he grasps George's impact on those around him - whether it be an inmate, a new corrections officer, a fellow referee or a rambunctious defender sitting perilously on a yellow card.

"He raises the bar," Meegan said of George. "He has been a mentor, a big brother, a best friend to me. There's no phony in him at all. He's almost too good. You think, 'There has to be some flaw in this guy!'"

Over the years of their friendship, Meegan recalls several instances in which George was thoughtful and selfless. The "big brother" was more than willing to play the bagpipes in Meegan's sister's wedding - "It wasn't even my wedding," a grateful Meegan remarked - and George also crafted a wooden oar, by hand, as a retirement gift when Meegan left Wyoming. George previously built a wooden airplane for Meegan's son on his birthday, with the Meegans' house address replacing the tail number. 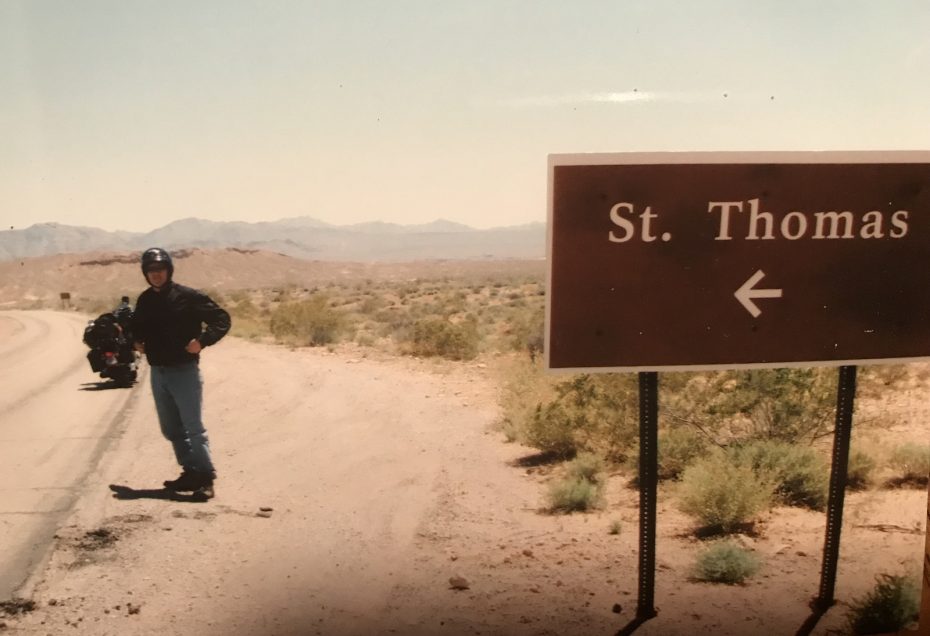 Tom George poses near a sign in Utah during a motorcycle trip in which George and Meegan visited the Grand Canyon, Moab, Bryce and Zion. (via Kevin Meegan)

But George's willingness to mentor extends beyond his closest friends. Local referee and BDSL player Jamel Abdallah, who cherishes George's accessibility, recalls a memorable line the elder referee told him.

While few within the local soccer community knew of George's diagnosis, word spread among a tight-knit bunch of local referees.

"I was shocked," admitted John R. Kramer, the state director of assigning for the Western New York State Referees Association. "Tom has always been a model for health and fitness for all of us. To me, Tom’s recent diagnosis brought back the memories of another one of our family, Tom Mingle, who we lost to cancer."

At the BSC Raiders' U.S. Amateur Cup match at Nichols, referee Mark Lammerhirt quietly passed along a health update on George, as a handful of fellow officials stood in rapt attention. Although - or perhaps because - they regularly deflect irrational (and sometimes rational) scorn together, Buffalo's local referees share a bond deeper than many would suspect, and that affection intensifies when one of their own faces extreme hardship.

"Many of us will tell you the best part of working as a referee are the friendships we make, especially traveling together out of town," Kramer added. "The car rides are sometimes more memorable than the games. We are a special kind of family and our support for one another goes far beyond the pitch."

While the BDSL will certainly miss George this summer, the referee was quick to admit similar sentiments.

"Every referee has their favorite season to ref, and I think I'm the only one - and I mean the only one - who looks forward to BDSL the most," he emphasized. "It's my favorite thing to do in the summer."

George's roots as a referee go back much further, to 1979-80 when he was sanctioned as a referee in the United States Soccer Federation (USSF). He stopped for a time before returning to officiate WNY Junior Soccer League games in 1994. 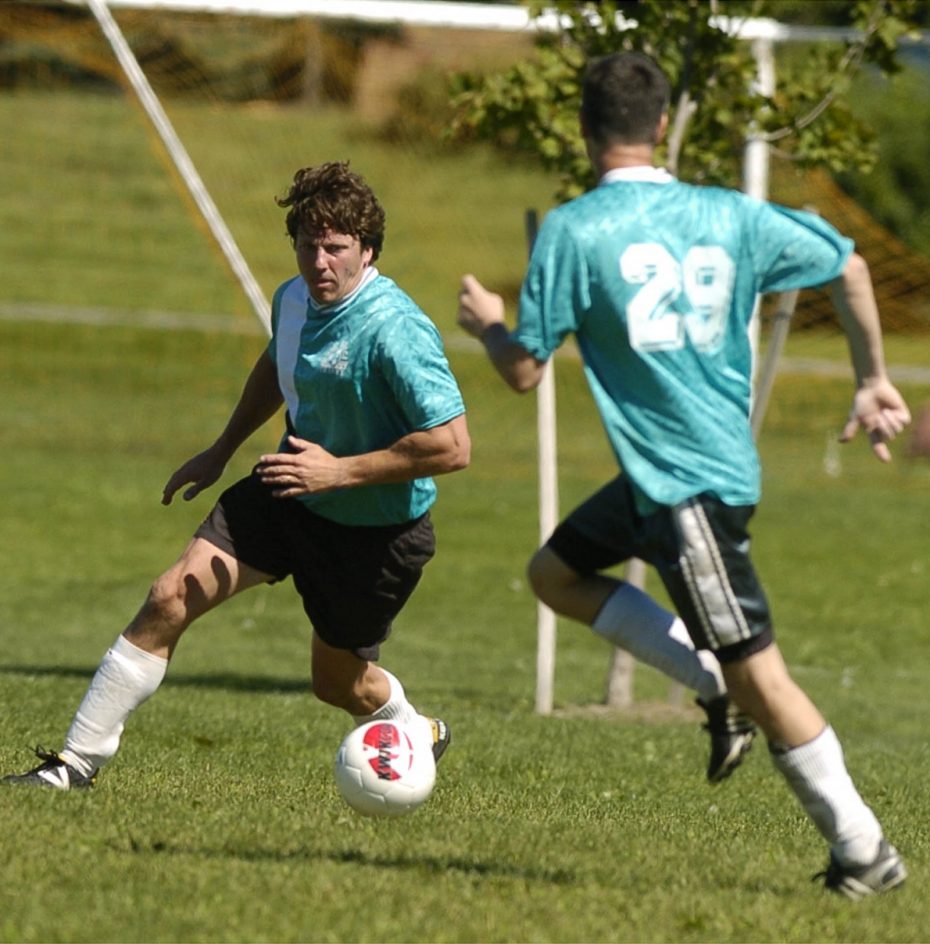 George began refereeing college and BDSL matches in 2000, the same year he stopped playing in the amateur men's league, then became a member of the National Intercollegiate Soccer Officials Association from 2005-2015 - during which he vaulted to a national rankings in the NISOA - while still juggling WNYJSL duties during the summer.

After establishing himself in the upper echelon of local referees, George has taken the time to help mold the next generation.

"He's great at building and maintaining relationships on the field and really took me under his wing when I started [refereeing] college soccer," said fellow referee, former FC Buffalo goalkeeper and Queenston FC standout John Netter.

"Being a younger referee in the college ranks, he gave some great advice in terms of game management and how and when to involve your emotions."

George's ability to communicate is his strongest trait as a referee, Meegan agrees, and that asset is evident whether it's dealing with a high school player or a Division I athlete.

"You can tell his command of the field by the respect he receives," Meegan noted.

In officiating the local amateur men's league, George would routinely draw tough assignments that weren't for the faint of heart. He's kept matches in control in atmospheres that would either intimidate or unnerve many referees, regular taming BSC Raiders, Soho FC and BUSS, three teams known historically for their tenacity, fiery personalities and success.

[Related: Comprehensive preview of the BDSL's premier division for 2018]

How does George keep his cool in these situations? Because he knows what it's like to be on the receiving end of a hard foul on a 90-degree Sunday afternoon on the scalding turf of Nichols.

If his treatment goes to plan, however, George hopes to be back on the field in 2019.

"I'll be an invisible man for a year," George said wistfully. "This summer is going to be real, real hard for me, but my support system has been through the roof."

George isn't interested in a benefit event, nor does he want to draw attention to himself. He was reluctant to give this interview, as he values his privacy. His wife, Maureen, whom he lovingly refers to as being "focused," has taken classes and researched the form of cancer extensively and dived deep into the nutritional treatment of the disease.

"I'm blessed to be able to retire, collect a pension and not be in need," George said.

Despite his weakened state, George's intensity is focused squarely on his health, on turning the corner after a brutal treatment plan.

"There's no quit in him, and he's nothing but positive," Meegan summed. "He's got a great attitude and family - and his friends will be there for him."