We see your Chrysler Building and raise you Buffalo City Hall.

There are few finer examples of Art Deco architecture in the world than this sandstone sentry, an astonishing piece of 20th century design filled with the pride and promise of a city on the rise.

Standing tall on the western side of Niagara Square, the 1931 building anchors a view that architecture critic Ada Louise Huxtable once called "the greatest urban vista in America." Its friezes and murals tell a story of past and present, melding Native American symbols and classical tropes with the new vernacular of American industry.

The shape of the building itself is grounded in nature and pre-Columbian history, with a crown modeled after the headdress of an Indian chief. But it is also oriented toward the future, with spaces intelligently left open for future expansions that never came to be.

Gretchan Grobe, a member of Buffalo's arts commission, longtime head guest services representative at the Albright-Knox Art Gallery and expert on the architecture of City Hall, recently led a tour through of the building's exterior and first floor. A second tour of the upper floor and observation deck will follow, but for now, here are five facts you may not have known about Buffalo's most iconic public building:

1. A story of past and future

City Hall is a story as much as it is a building. To that end, the decorative elements that adorn the outside of the structure are tied directly to the history of the city and its aspirations. The front of the building, facing Niagara Square, features a frieze honoring the industries and activities upon which Buffalo built its wealth and identity: electricity, construction, architecture, science, family, education and railroads.

The west-facing frieze honors Buffalo's history as a canal town with deep connections to Native American culture, featuring a central image of the Indian chief Red Jacket and Peter B. Porter during the War of 1812.

2. Greek columns? Buffalo can do better.

Rather than mimicking classical designs and going for your standard Ionic, Doric or Corinthian columns, architect John J. Wade had other ideas: turn the supporting structures into symbols of the city's unity.

"The pillars are not Greek pillars. They're actually bundles of reeds," Grobe said. "The symbolism is if you work together and you stay together, the city will stay strong."

Beyond the symbolism, the choice of creating custom columns has the effect of making the building more organic than many of its counterparts, tying it directly to the landscape and to the natural history of the city. 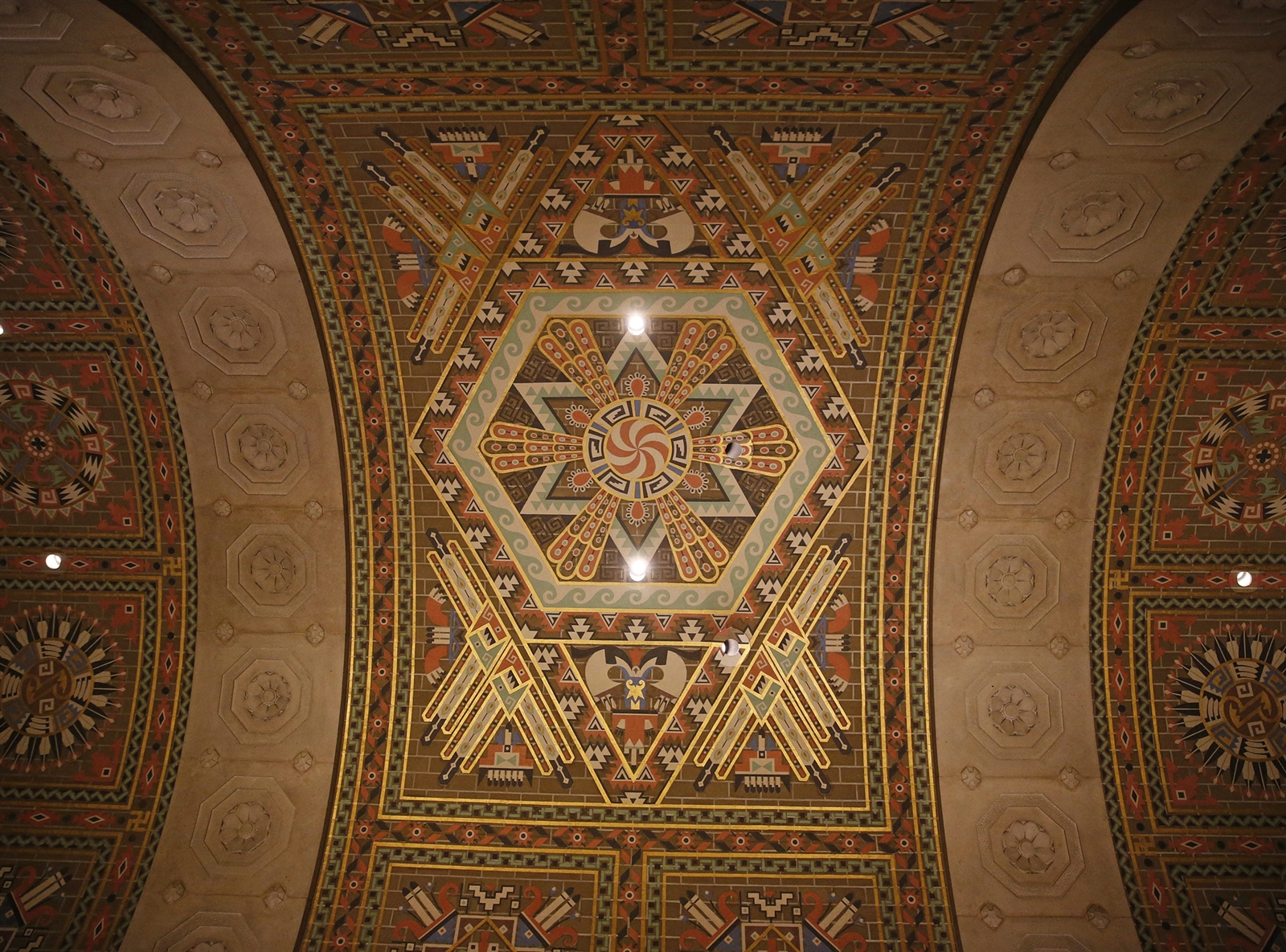 A design in the center of the ceiling on City Hall's first floor is based on an Indian headdress. (Derek Gee/Buffalo News)

3. In design and structure, Native American culture dictates all

The designers and artists who created City Hall had a deep understanding of this region's Native American history and culture, and that culture suffuses every part of the building. Perhaps most remarkably, Wade and his fellow designers were enamored with Indian headdresses: the hexagonal crown of the building is designed to resemble one. And in the main lobby, designed after a longhouse, the center ceiling panel features an intricate design that Grobe said is what an Indian chief's headdress would look like if it was completely flattened out.

4. City Hall was 'green' before it was cool

Before the invention of the air conditioner — another Western New York achievement — architects had to be clever about heating and cooling. To that end, City Hall was designed with an intricate system of air shafts constructed to siphon the winds coming off of Lake Erie into the building and through its corridors.

"The air got sucked into the vents, went down to the second sub-basement, and if all the doors were closed and the transoms were opened, it would cool the building," Grobe said. 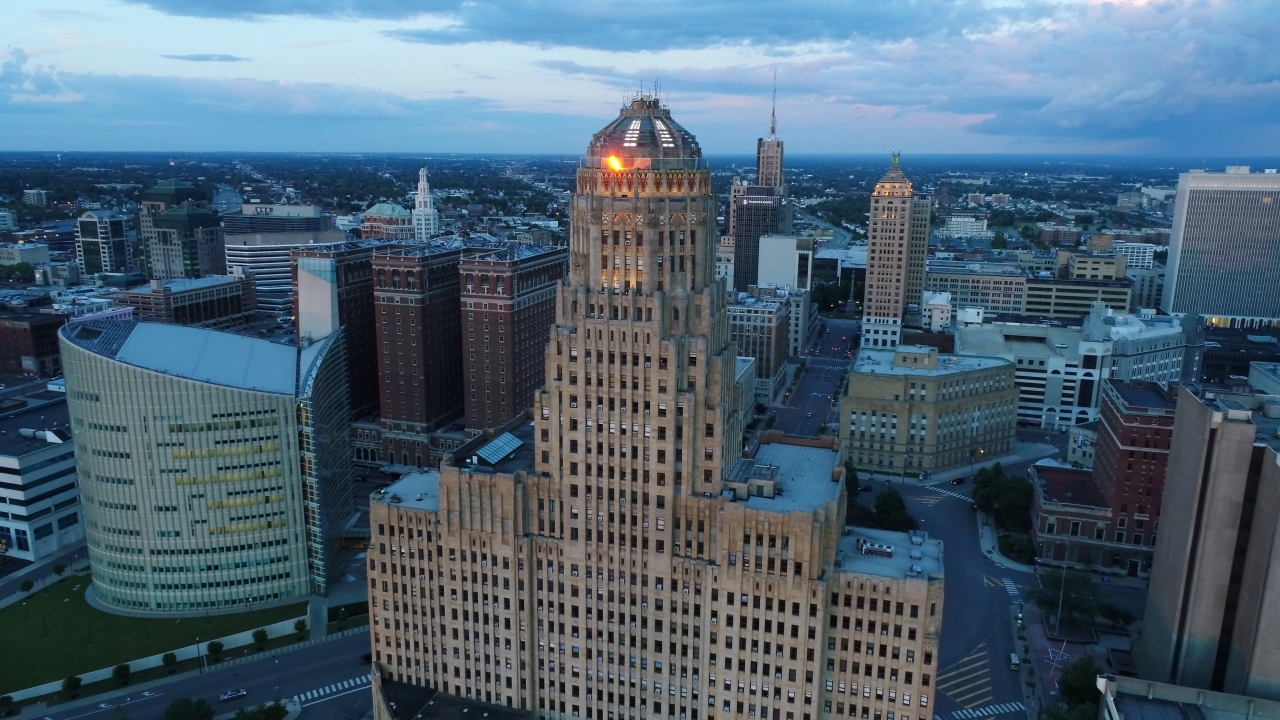 5. Designed with expansion in mind

A growing city needed a growable city hall, so Wade and his team designed the building to be easily expanded as Buffalo's population swelled.

"In the early 1900s, the city had quadrupled in size, and by the 1920s, the old City Hall just got to be too small," Grobe said. "Our city fathers expected the city to keep on growing, so this building was meant to be expanded. There's arms out in front on the 13 floors, and there's arms on the back."

If Buffalo ever starts growing again, it's unlikely that expandability will be utilized. The structure, one of the nation's finest, is now too meaningful to modify.