Maniacal Buffalo Bills fans face hard choices. Ken Johnson, the celebrated "Pinto Ron" of Bills pregame fame, had a chance to be in Dallas for last week's National Football League draft. He was invited by Ezra Castro, best known as "Pancho Billa," who offered Johnson a spot on the floor, near the dais, at AT&T Stadium in Arlington.

Johnson turned it down. To go would have meant burning three vacation days, and vacation days are precious stuff for a software engineer from Rochester who follows the Bills around the country. The only thing that would have gotten him to Dallas was if he really thought the Bills and the NFL would do the unimaginable by inviting Castro onto the stage and allowing him to call a pick.

Even Johnson, famous for getting slathered with ketchup and mustard and assorted condiments in a parking lot before every Bills home game, did not believe it would happen. A while ago, he ran into some friends from inside the Bills organization who told him it was a long shot, that they loved Castro but this request might simply be too much.

Today, they will happily admit they were protecting a once-in-a-lifetime surprise.

Friday night, in that bright spotlight, Pancho Billa got his chance.

Johnson, left to wish that he had been there, puts it bluntly: It was one of the great acknowledgements of Bills fans in franchise history.

Castro, who is president of the Bills Backers fan group in Dallas and Forth Worth, is being treated for stage four cancer. He learned about it last fall, when he had a checkup for what he thought was a pinched nerve. The doctors ran some tests. They discovered Castro, 38, had tumors in his liver, lungs and lymph nodes, and a massive one – wrapped around his spine – that was surgically removed in December.

The Bills Mafia, a nationwide movement of fervent Bills loyalists, rallied around him. Castro, who came into his extreme loyalty for the Bills during a Texas childhood, is a mortician. He and his companion, Veronica Borjon, have two young children. Katie O'Brien, a breast cancer survivor who is president of the Houston Bills Backers, started a GoFundMe account to help the family.

As for Johnson and his buddies from the notoriously raucous Red Pinto Tailgate at New Era Field, they got things rolling on social media. Long ago, they built close ties to Castro. In his blue-and-red mask and sombrero, in the way he seems to show up everywhere, he is among the most visible Bills fans in the nation.

The Red Pinto folks started tweeting, relentlessly, about the draft being in Castro's own city. What better honor, they kept asking, then for the Bills and the NFL to allow Pancho to make a pick?

The Bills, while cautious publicly, were listening. Shaena Kershner, the team's director of marketing, said talks began months ago about bringing Castro up on stage. NFL officials, she said, were excited about the idea when she proposed it.

The mission became doing it in a way that surprised Castro – or that did not break his heart if anything went wrong.  Team officials came up with a perfect way of getting him to the draft, without tipping him off. As president of the Bills Backers in greater Dallas, the club put him in charge of an "inner circle" of 50 Bills fans, stationed near the stage.

Yet every team received a similar allotment of tickets. And the Bills, knowing something could change at any instant, kept downplaying the possibility that Castro might announce a pick.

Meghan Hess, Bills manager of community relations, was assigned to work with the fans in Dallas. Castro said she was helpful at all times, but she also told him that being on the floor was an unusual honor and almost certainly as good as it would get, that the Bills had made too many trades for any fan to hope to get called up on stage.

[Also by Sean Kirst: Despite the hurricanes of life, this Bills backer says she's lucky]

So Castro expected nothing when Bills legends Andre Reed and Fred Jackson walked to the dais Friday night, supposedly to reveal the Bills' third pick.

Instead, as television cameras focused on Castro and tears came to his eyes, Reed started talking about a guy he described as "one of the most recognizable fans in Buffalo Bills history."

Reed mentioned how Castro had gone through another round of chemotherapy only a few days earlier, how none of it was enough to "dampen his spirits," and then asked Castro to come up on stage. A couple of friends all but lifted Castro toward the steps. As O'Brien and other Bills fans screamed in raw jubilation, Jackson and Reed handed Castro a keepsake jersey and the draft card itself.

An overwhelmed Castro thanked the Bills Mafia, then read off the pick: Defensive tackle Harrison Phillips of Stanford. "Yeah, baby, Viva Los Bills!" Castro shouted, before descending into a crowd he likened to a "mosh pit," a crowd that swept him up in one vast hug. 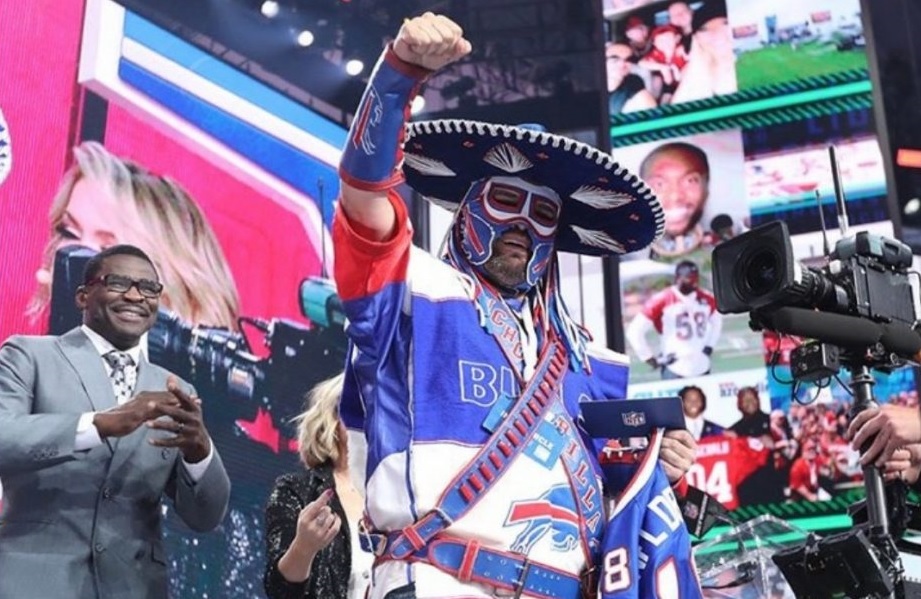 Pancho Billa, in the moment, on stage. (Image courtesy of Ezra Castro)

The moment was unforgettable, Kershner said, because it was so indicative of Buffalo itself, a revelation speaking "to the way we are." Johnson, in Monroe County, said the power sprang from the unique way it came to be, "because it was generated by the Bills fans, the Bills Mafia, themselves."

Castro said his brothers Jaime, Zenoc and Eli were all there when he read the pick, as were his cousins from El Paso. Jaime and Zenoc are Dallas police officers. "They were hurting," Castro said, after a week in which fellow officers Rogelio Santander, Crystal Almeida and store loss prevention officer Scott Painter were shot – Santander fatally – during what began as seemingly a routine call. 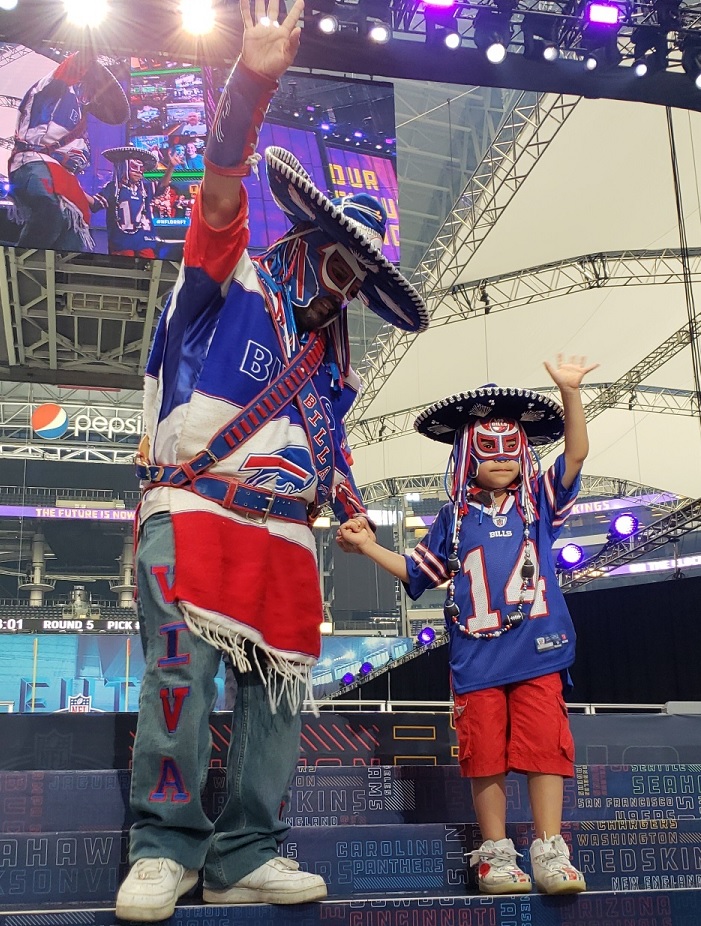 Pancho Billa waves to the crowd with his son 'Panchito' - whose true name is Ginobili. (Image courtesy Ezra Castro)

For a short time, Castro said, the draft offered a flash of joy, an escape.

He spoke with gratitude of the newest #Pancho2Ellen campaign on social media, where many Bills fans are trying to convince Ellen DeGeneres to bring Pancho Billa onto her show. Still, if DeGeneres calls or not, what matters most to Castro has already occurred.

Castro lives a quiet life. As O'Brien said, he is a devoted father who does not drink or smoke. After his big moment, he went home and wrapped his young children, Ginobili and Lourdes, in a hug. He had another embrace for his mother, Aurora, and his aunt, Vangie, who watched the little ones while he was at the draft.

Then he went to bed and fell into an exhausted sleep. For an instant, when he woke up in the morning, he believed all of it had been a dream, until waves of memory swept across him and he knew that it was true.

Pancho Billa, before the world, had walked the stage and made the pick.