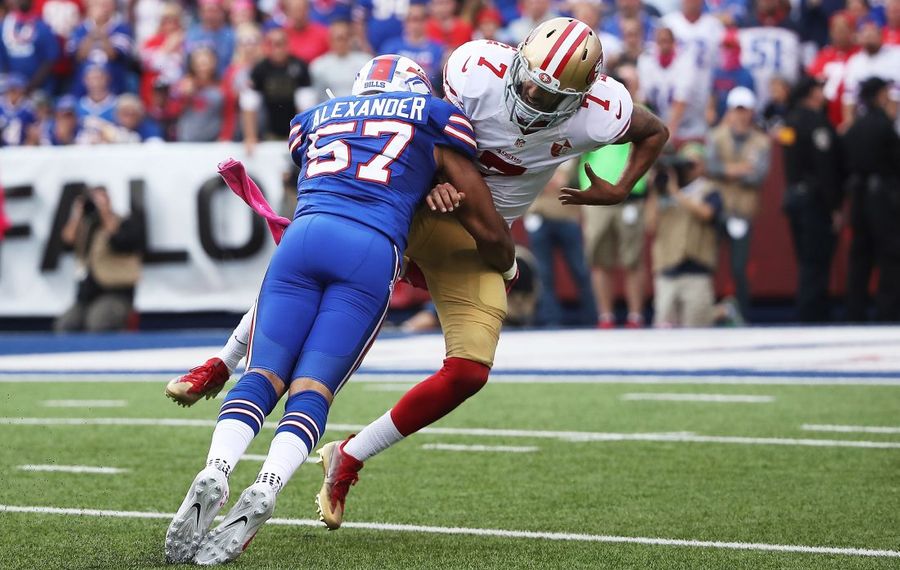 Alexander posted a video of his plea to the NFL Monday, in advance of a scheduled meeting Wednesday in New York City to study changes or alternatives to the kickoff play.

Bills great Steve Tasker will be part of a select group of special-teams experts the NFL is bringing together for a meeting to discuss the future of kickoffs. It's part of an NFL effort to reduce injuries, and kickoffs are viewed as one of the more dangerous plays in the game.

"It's an essential part of the game, and it's really been woven into the fabric and the culture of football," said Alexander, a 13-year NFL veteran and a former Pro Bowler as a special-teamer. "I understand that there's been a lot of talk about taking it away. But that would be a huge mistake for the game for the fans because it's definitely a play that is exciting that the fans love, it deals with field position and it's also a scoring play."

Numerous NFL executives made it clear at the league owners meetings in March that more must be done to reduce the number of injuries on kickoffs. Tasker said last month he thinks the kickoff is in jeopardy.

"If they can find something they like, that will help because it is a violent play in the game," Tasker said last month. "I think its days are numbered. I think they're going to come up with an alternative to the kickoff."

Special Teams is woven into #NFL culture! It's a vital part of the game, has produced great players & fans enjoy it. On May 2 I hope the @NFL is truly open to the creative ideas being presented that'll make the game safer while maintaining the integrity of Special Teams. pic.twitter.com/4R5UTqB4B9

Alexander is against a drastic change.

"By taking away kickoff, kickoff return, you're really changing the game and impacting so many guys, not just guys like myself but a lot of players and coaches as well," Alexander said in his video plea. "I understand the NFL is trying to look for ways to make the game safer. Players are doing the same thing. But before we make drastic changes to our game by removing possibly the kickoff, I think there's so many other things we can do as far as working together."

Alexander suggests changing the alignment of players on the kickoff to try to reduce full-speed collisions. "Do I have to have eight guys all the way up?" he says. "Can the kickoff team not get a running head start? All these things we can think about to maybe limit or decrease the big collisions and impacts that we see blockers taking on kickoff returns."

Alexander also suggests increasing the game-day roster from 47 so that fewer starters are needed on special-teams units. He says this could reduce fatigue-related injuries.

One radical proposal that was floated by former Tampa head coach Greg Schiano almost a decade ago was instead of having a kickoff, allow the "kickoff team" to get the ball on its own 30, facing a fourth-and-15 situation. Most of the time, the team would opt to punt the ball to the opponent. If the team opted to go for the first down, it would be the equivalent of an on-sides kick.

The Wednesday meeting, which Tasker said would include former players and 10 special-teams coaches, is designed as a brainstorming session. Any rules change would have to be approved by owners.

"I think we can come up with a creative solution to making our game safer as well as maintain the integrity of the game by keeping kickoffs in it as well," Alexander said. "I hope everything goes well and this falls on some hearts and ears that are willing to come together and have a collaborative effort to make our game better and safer as well."

Replied Tasker on Twitter: "I promise to do what I can to use this opportunity to give our game a gift that will enhance its appeal. It may look different but it must stay in the game somehow someway."