At the Spoth farm in Amherst, a new crop will sprout in coming months on about 100 acres previously set aside for corn.

The difference will be obvious. The new plants will look like marijuana.

The Spoth farm, a fixture on Tonawanda Creek Road for generations, will likely rank among New York State's largest hemp farms this year.

For the first time, the state has opened up growing and processing industrial hemp to farmers, businesses and researchers. State agriculture officials expect industrial hemp production will almost double in 2018.

The Spoth farm is among nine in Western New York permitted to grow a plant the federal government still considers an illegal controlled substance. More than 60 farms and businesses have received research permits as part of a state pilot program.

Hemp is one of several varieties of cannabis, but it is different than marijuana.

Although nearly identical in appearance, industrial hemp is a commodity crop that can be used in many ways, including textiles, paper, rope, insulation, mulch, animal feed and natural herbal products.

But you can't get high off industrial hemp. In most cases, the cannabis plant contains 0.3 percent or less of the chemical compound tetrahydrocannabinol (THC) that gives marijuana its reputation.

Now, the Spoth farm and several others in Western New York hope to benefit from the state's ramped-up interest in industrial hemp.

They include smaller farms, too, like the one operated by Christopher and Paula Jeanniton in Collins. The Jeannitons plan to grow hemp on 5 to 10 acres of their 56-acre farm.

"There are about 25,000 uses for hemp. We want to experiment with about 10 of them," said Paula Jeanniton.

The federal Farm Bill in 2014 eased restrictions on industrial hemp, allowing states to pursue their own research and development programs.

Until now, only research institutions and a small number of farms could participate when the state Department of Agriculture and Markets launched its Industrial Hemp Agricultural Research Pilot Program in 2016. The state allowed a few farms to participate last year, and the acreage devoted to hemp farming increased from 30 acres to about 2,000 acres.

Ball expects that number will grow to about 3,500 acres this year.

“Virtually every country in the world is growing hemp, and has been for years,” Ball said. “We took a nap on this for decades. Could you imagine if someone came up to you now and said, ‘Hey, there’s this great new crop – and it’s called corn.' "

Few predict industrial hemp will become more popular than corn in America's farm fields, but it could soon become an everyday —and even a routine — part of American life.

"We’ve got to advance our thinking in a hurry,” Ball said.

Don and Dan Spoth intend to plant 60,000 industrial hemp plants, if all goes as planned.

The plants will be used to make nutritional products like hemp oil, used to treat chronic pain and inflammation.

Don Spoth has been farming for 58 years while Dan has done so for 56 years at their roughly 800-acre Tonawanda Creek Road farm, which has been in the family since 1900. The Spoth brothers envision a new crop that can be used for food, feed and medication.

"It's like the soybean on steroids," Don Spoth said. 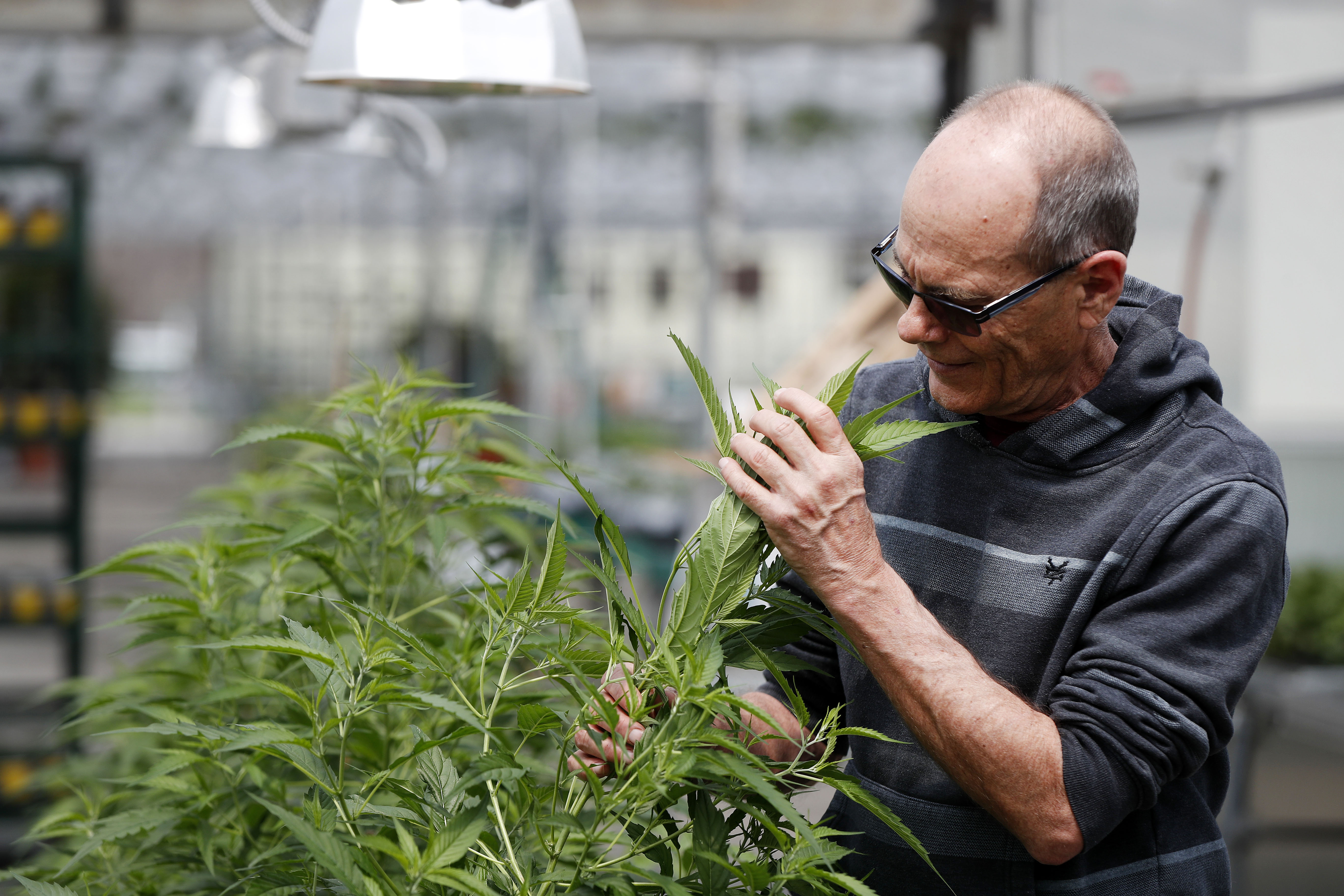 Michael Barnhart holds one of the hemp plants at the Donald Spoth Farm & Greenhouse in Amherst on Friday. (Mark Mulville/Buffalo News)

This year’s crop is already well on its way.

Rows of hemp plants – from germinating seeds and tender seedlings to 5-feet-high potted plants with buds – grow under the watchful eyes of Mike Barnhart, the owner of Buffalo’s Plant Science Laboratories who holds the growing permit for the Spoth farm and three others in the region.

The Spoths grew industrial hemp for fiber and seed research through Cornell University in 2017.

Setting aside almost 100 acres for industrial hemp is one of the biggest changes they've made at the farm.

Instead of planting cabbage every 9 inches, the planter will drop a hemp plant in a deeper hole every 6 feet in 10-foot rows in a zone-tilled, open-field planting technique.

“I see no reason it won’t work,” Dan Spoth said.

In addition to hemp oil, parts of the plant can also be dried and taken in tablet form to treat muscle pain and anxiety, Barnhart said.

If all goes right, the Spoth farm will be the state’s largest cannabidiol producing farm in New York State this year.

“The hemp plant pulls so much carbon dioxide from the air,” said Don Spoth. “So, not only do you have tremendous economic opportunities and jobs, it’s scrubbing the air.” 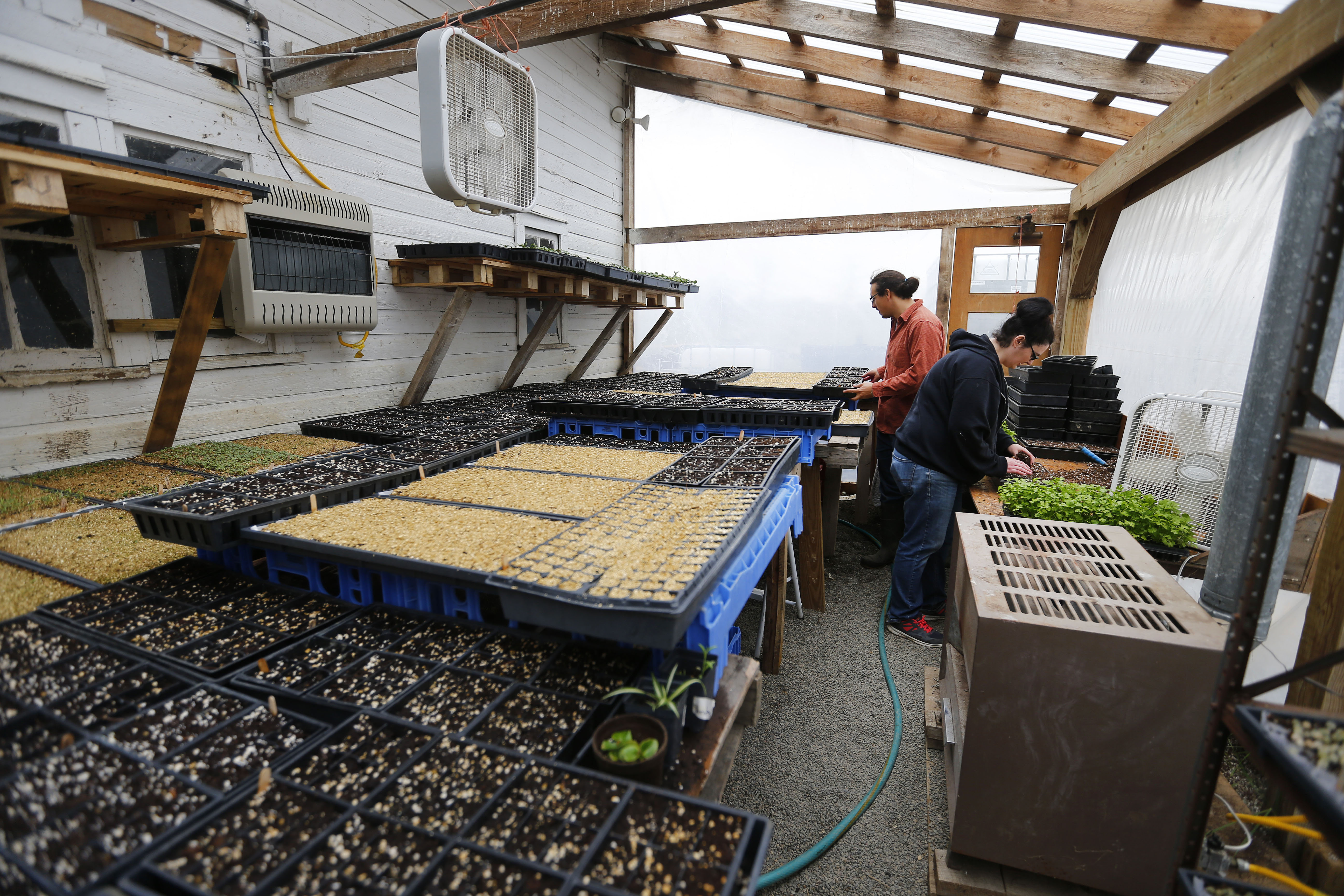 Chris and Paula Jeanniton get plants in their greenhouse ready for their CSA on their farm in Collins last week. (Mark Mulville/Buffalo News)

At the other end of Erie County, Christopher and Paula Jeanniton also look to hemp as a useful crop, albeit on a smaller scale than the Spoths.

They're beginning their third year on the Collins farm. A few years ago Chris Jeanniton worked as a software engineer at John Deere's headquarters in Moline, Ill. Paula Jeanniton rolls wildflower seeds and paper pulp into a small balls and sells them over the internet.

Now, the married parents of two boys, ages 2 and 6, hold a state license to grow industrial hemp on their Route 39 farm. And, they believe their Farm in Peace can make a go of it.

“Between us, we have five college degrees,” said Paula. “The hemp is mostly an experiment.”

After attending a symposium about industrial hemp at this year’s New York Farm Show, the Jeannitons knew they wanted to be a part of it.

“We’re trying to be on the forefront of something new,” said Christopher.

The couple learned everything they could about cultivating industrial hemp.

They read reports. They talked to experts. Then they devised a plan and filed a lot of paperwork.

The Jeannitons operate a community supported agriculture crop-sharing program at their farm.

They distribute nearly 50 different kinds of vegetables to their two-dozen or so shareholders during the growing season.

This year’s crops are starting to sprout on crates in a greenhouse near their barn, but you won’t find any hemp in there yet.

They’re still waiting to get seeds from the state Department of Agriculture and Markets.

“We’re hoping by the end of the month,” Christopher said.

After the hemp plants sprout, bud, flower and grow about 8 feet high, the Jeannitons expect to harvest them by hand.

They’ll separate the woody hurd and the fibers – either by hand or some type of makeshift farm implement – and try to experiment with different products.

Some might include marketing the high-protein seeds that are produced as grain for animals or to a local cafe to be ground into a coffee mix.

Others could involve trying to make paper from the plant’s fiber, mulch or compost from its hurd or trying to make their own “hemp-crete” eco-conscious building material.

As the Jeannitons experiment with growing techniques they’ll keep notes of soil conditions, planting locations, weather and other variables along the way.

Then, as required, they’ll report back to the state about their findings.

“With our educational background, we’re well suited to do research, to collect data and to report data,” Christopher said. 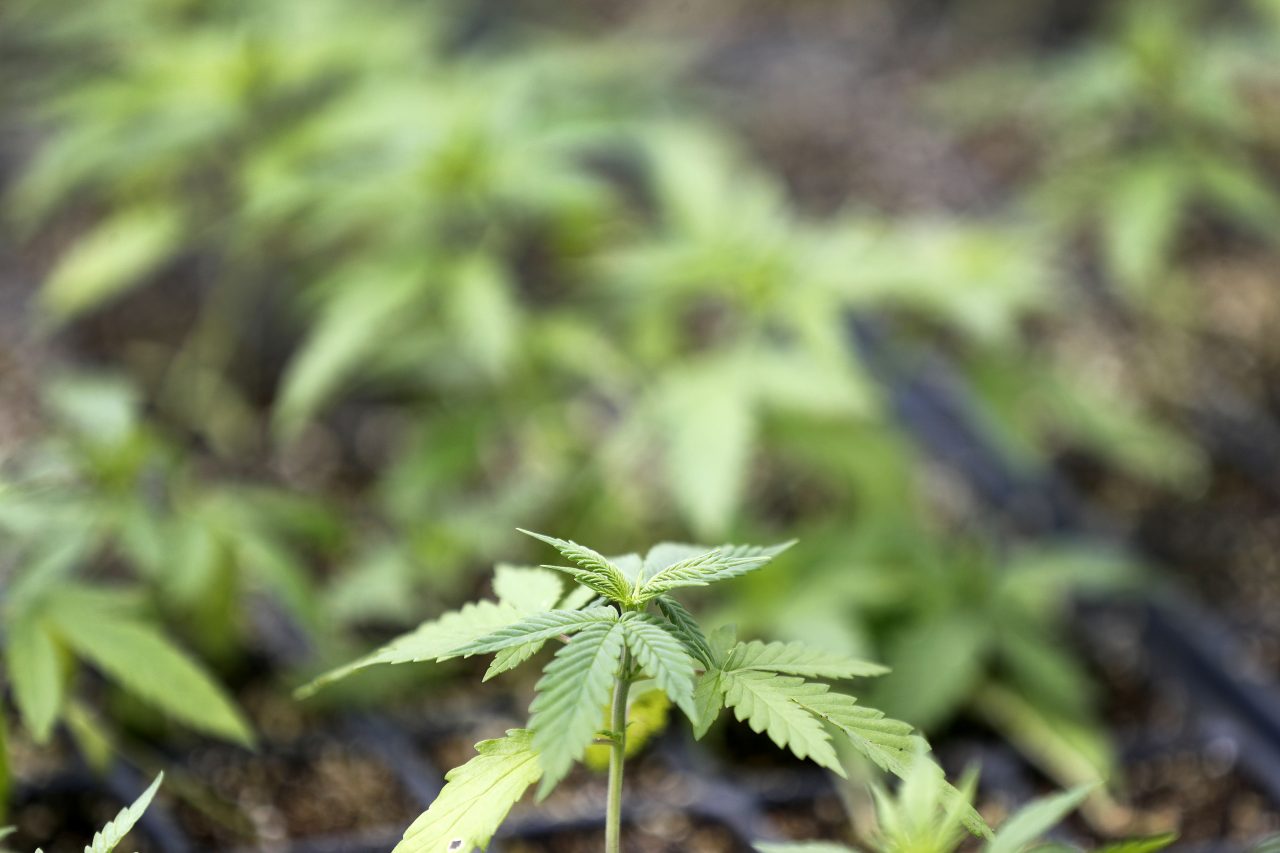 Some of the young hemp plants growing at the Donald Spoth Farm & Greenhouse in Amherst. (Mark Mulville/Buffalo News)

Canada and states like Colorado and Kentucky are already leaders in industrial hemp production.

Gov. Andrew M. Cuomo opened applications to farmers like the Jeannitons last September emphasizing New York State could also be at the forefront of an emerging industry.

“It gives us the perspective that there is strong potential for hemp to be an economically viable crop in New York State,” said Donald R. Viands, a Cornell University professor who researches plant breeding and genetics.

Cornell University is among the institutions working with farmers on research trials and studies.

The results of those studies will show the state’s best locations and conditions to support industrial hemp production as well as the best uses for the product, Viands said.

Cornell researchers are collaborating with others in the state and around the world – including experts in China – to create the state’s own variety of industrial hemp seed for future cultivation and production here.

Creating a New York State-specific cultivar will result in the most viable plants in this climate and will eliminate transportation and importation issues.

“It would allow us to produce seed in New York State, so there’d be no problem crossing state and international borders,” Viands said.

That could be just three to four years away, Viands said.

The biggest obstacle to making industrial hemp a cash crop for New York State could be the stigma associated by the plant’s relation to marijuana.