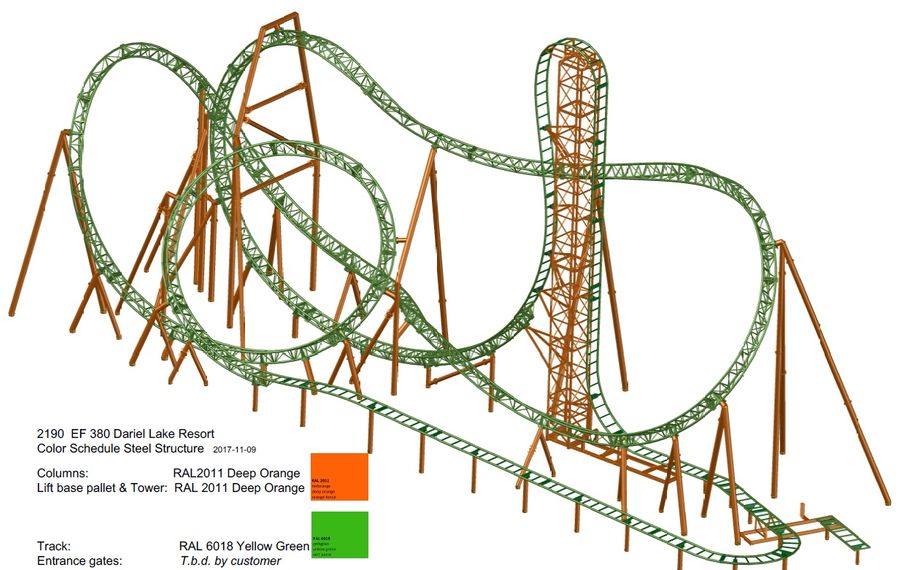 While Darien Lake theme park opens for the season May 5, fans excited for the debut of the Tantrum, the entertainment venue's first new roller coaster since 2008, will have to wait a bit longer.

Darien Lake officials confirmed the Tantrum would be ready for public use sometime on Memorial Day Weekend, May 25-28. The $5 million project is the first major addition since the Orange County Choppers MotoCoaster a decade ago, and first under EPR Properties, which purchased the park in 2016.

The Tantrum, which begins with a 98-foot climb at a 90-degree angle - exactly straight up, also dazzles with a 97-degree drop - the first ride in New York state and Ontario to feature with a beyond-vertical descent, a press release said. Minimum height necessary to ride the Tantrum is 48 inches.

The steep climbs and dives, as well as pretzel-like loops, appear to be the calling card of the Tantrum, as its peak speed is 52 miles per hour, a considerable degree slower than the Ride of Steel, which reaches 75 miles per hour. It replaces the Thunder Rapids log ride.

The hill is going up on Tantrum!

Anticipation for the Tantrum is considerable; Darien Lake's Facebook post, above, from Saturday has already received more than 600 shares.

Season passes for the park now cost $69.99, although the cost drops to $59.99 apiece if four or more are purchased at once.

Watch a video of what to expect on the new coaster from The News' November 2017 post, below:

Video: Preview the roller coaster launching at Darien Lake in May