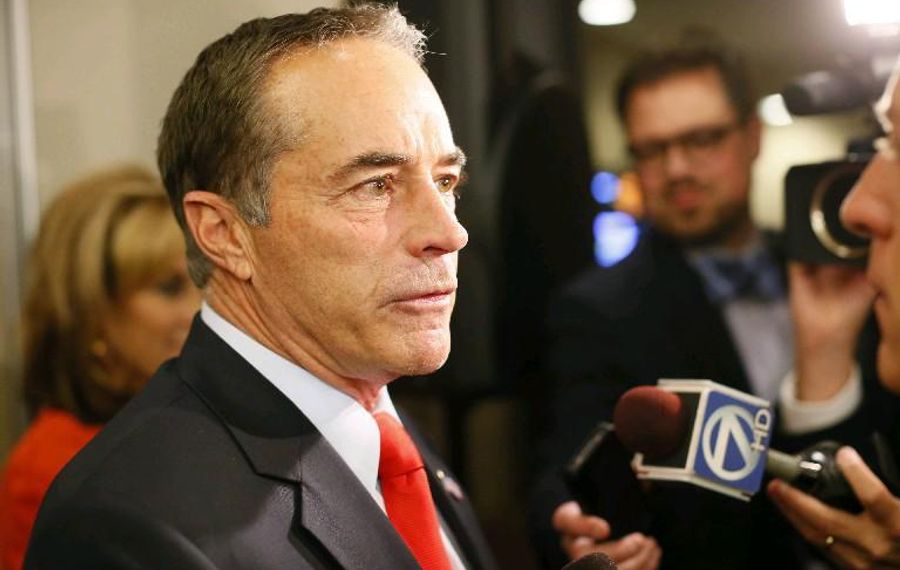 WASHINGTON – Rep. Chris Collins resigned last week from the board of Innate Immunotherapeutics amid major corporate changes and a fresh round of controversy about the Clarence Republican's investment in the Australian biotech firm and legislation he has introduced that could conceivably help it.

The congressman's spokeswoman, Sarah Minkel, confirmed Friday that Collins had left the company's board. Minkel would not explain why Collins had resigned, but company documents indicate Collins and three other longtime directors had to quit as a condition of Innate's purchase of Amplia Therapeutics, another Australian biotech firm.

According to the terms of that acquisition, Innate will get several new board members formerly associated with Amplia, Innate said in a corporate filing.

Innate's shareholders approved the acquisition of Amplia, as well as the new board members, at a meeting in Sydney, Australia, on Thursday, the company said in another filing with the Australian Stock Exchange.

The congressman's involvement in Innate resulted in a still-pending House Ethics Committee investigation. That followed an Office of Congressional Ethics report last October that said there was "substantial reason to believe" that Collins broke federal law by touting Innate's stock based on inside information. The ethics office also said it believed Collins advocated on behalf of Innate before the National Institutes of Health.

In addition, Collins' resignation came the week after a Daily Beast story that outlined four bills that he sponsored that could have aided Innate, prompting fresh criticism from ethics watchdogs.

In light of all that, the first person to file an ethics complaint against Collins – Craig Holman of the left-leaning Public Citizen's Congress Watch – offered a blunt reaction to Collins' resignation from Innate's board.

"It sure took him a long time," Holman said.

Board seat a rarity

The Buffalo News reported last year that Collins was the only member of the House to serve on the board of a publicly traded company, prompting ethics watchdogs to warn that he was privy to non-public company information and could use it to profit on insider stock deals or legislate on Innate's behalf.

Collins has defended his involvement in Innate and denied any wrongdoing.

“Throughout my tenure in Congress I have followed all rules and ethical guidelines when it comes to my personal investments," he said in a statement after the Office of Congressional Ethics released its report last fall. "I was elected to Congress based upon my success in the private sector, and my willingness to use that experience every day to facilitate an environment that creates economic opportunity and jobs."

Collins was deeply committed to Innate, as well. Last August, while Office of Congressional Ethics investigators were preparing their report, he ran for and won a new term on the company's board.

"Chris has been a fabulous supporter of the company since 2005," Innate CEO Simon Wilkinson said at the company's annual meeting in Sydney where Collins won that new term on the board.

Despite his departure from Innate's board, he remains a company shareholder, Minkel said.

Innate's website states that, as of Feb. 5, Collins owned 16.8 percent of the firm's stock, but that share will change as a result of a corporate restructuring to be finalized this week as part of the Amplia purchase.

Under the deal, Innate will acquire all the shares of Amplia, a privately held company, in exchange for new shares to be issued by Innate this coming week. Once the deal is settled, Amplia shareholders will own 45 percent of Innate's stock.

Collins has not yet, however, filed any reports this year indicating that he has sold any of his Innate stock.

The lawmaker's heavy investment in the company has been at issue as well as his seat on the company's board, given that he has touted the company's stock not only to investors in Buffalo but also to colleagues on the House floor.

In addition, Collins serves on the House Energy and Commerce Committee, which oversees the pharmaceutical industry and reviews legislation that can affect it.

That being the case, "the conflict of interest is still very present if he hangs onto his shares," Holman said.

Collins now finds himself invested in a very different company.

Innate announced a month ago that it was acquiring Amplia, which has two immunotherapy products that aim to fight cancer. Innate's immunotherapy product, which it was testing for treatment of secondary progressive multiple sclerosis until the drug failed in clinical trials last year, is now being tested for its effectiveness against cancer as well, Innate said in announcing the company's change in direction.

"Refocusing on this existing area of our business is a logical move for the company and we are particularly excited to be pursuing certain cancers where the immune system could play an important role in successful treatment strategies," said Innate's CEO, Simon Wilkinson.

The Australian stock market liked the change in direction, leading to a run-up in Innate's stock from 2.3 cents a share a month ago to as much as 6.8 cents. The stock has leveled off at 3.2 cents a share since then, but even with that drop, Collins' shares are now worth $343,844 more than they were in mid-March – if he still owns the same number of shares as he did in the last company report in February.

Innate remains a long-term loser for Collins, however; a source close to the congressman said he lost about $5 million when the company's stock price collapsed last June after the company reported that its highly touted treatment for MS had failed.

Collins not only touted Innate's only product as a miracle drug to congressional colleagues and other potential investors, he touted it as just that in an interview with Office of Congressional Ethics investigators last June.

"Of all the things I will accomplish in my life, this will be number one on my tombstone: if, because of my involvement, we have cured secondary progressive multiple sclerosis, the most debilitating disease known to mankind," Collins said, according to a transcript of the interview.

Innate announced last August that it would search for a new mission and a new potential use for its failed MS drug.

But that new mission won't include Collins, who had no part in negotiating the Amplia deal, Minkel said.

"He won't be a part of the new entity," she added.

Much of the controversy involving Collins and Innate involved the fact that he wrote parts of the 2016 "20th Century Cures Act" that made it easier for companies like Innate to conduct clinical trials on their new drugs.

The Daily Beast reported earlier this month that was only part of Collins' effort to help pharmaceutical firms. In addition:

Asked about the Daily Beast report, Minkel, the Collins spokesman, disputed the notion that Collins introduced the bills on Innate's behalf.

None of those four proposed bills made it into law, but the fact that Collins sponsored them prompted the AIDS Healthcare Foundation – the world's largest AIDS organization – to call on Collins to recuse himself from legislation involving the pharmaceutical industry.

“In this polarized political climate, now more than ever we need legislators to avoid even the appearance of a conflict of interest in the legislation they are considering and enacting," said Michael Weinstein, president of the group, which fights for lower drug prices. "Many Americans already rank high drug prices as their number one concern, and any vote that appears to put a congressman’s own interests above his constituents is corrosive."

Collins has other financial ties to the pharmaceutical industry in addition to Innate. According to the non-partisan Center for Responsive Politics, the pharmaceutical industry has given Collins $44,500 in political action committee money for his re-election campaign as of March 31. Only PACs representing health professionals gave him more: $56,430.

Asked if Collins would recuse himself from future legislation affecting the pharmaceutical industry, Minkel said only: "No."