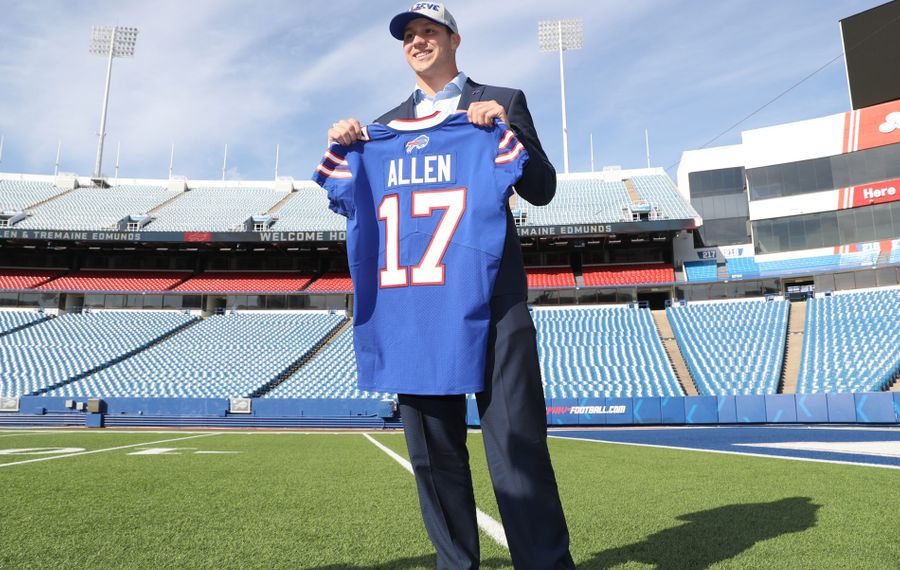 The Buffalo Bills' 2019 first-round draft pick was a nonstarter for Brandon Beane.

During an interview with WGR 550 on Monday morning, the team's general manager said two other clubs were "adamant" that the Bills include that pick in any move-up scenario during last week's draft.

"I'm like, 'no, I'm not giving you both 'ones' this year -- a 'one' in this year's draft, you know the 22nd pick -- is more valuable than a next year's 'one' so I'm giving you more right there.' It was off the table. When I laid this plan out with (team owners) Terry and Kim (Pegula) the whole idea is not to touch next year's pick."

Ultimately, Beane was successful in keeping all nine of the Bills' 2019 draft picks, but still made a move up for a potential franchise quarterback. He did so by sending the 12th overall pick and two second-round selections to Tampa Bay for the No. 7 pick, which was used on Wyoming quarterback Josh Allen.

Beane said that Allen will join the Bills as the No. 3 quarterback behind AJ McCarron and Nathan Peterman at the start, but didn't rule out that pecking order changing.

"Everything's a competition here," he said. "He will come in as the No. 3. I think Nathan and AJ are going to be well ahead of him. Even Nathan, just being Year 2, it's a huge difference being in a pro system and all of what goes with it. Even though it's a new offensive coordinator here and they're only a few weeks ahead by the time Josh gets here, they're going to be further along than even three weeks ahead. So Josh has a lot of catching up to do from that standpoint, but if we wins the job, he wins the job. We're not going to hold him back if he's clearly the best guy for us."

Beane also objected to the idea of Allen being "raw."

"I hate that word," he said. "All these guys come in with different things. There's none of them, I promise you, that are flawless. I don't think that's a fair label. I think what happens is nationally a guy or two who are so-called 'gurus,' they label each of these guys, 'he's the best pure passer, he's the rawest guy, he's got the most upside, he's too smart for his own good. He's whatever.' A lot of these guys did not come across to us as what was nationally reported about them, so I don't think that's a fair label to give him, is raw."

Beane was asked what role the Pegulas played in Allen's evaluation.

"That's important from an ownership stake. They need to understand and believe in the guy. At the end of the day, it was my decision, you know, on who we were going to take, but that was with input from (coach) Sean (McDermott), (offensive coordinator) Brian Daboll, (assistant general manager) Joe Schoen, Terry and Kim as far as, do they feel like this guy fits the culture and what we're doing here in Buffalo? But the final decision rested on me, and I understand what goes with that."

While Beane is happy to have added Allen, he made it clear the Bills had other options they were considering at the position.

"We really liked Josh. He wasn't the only guy that we would have been happy to take, but we were really into Josh," the GM said. "We knew he was a fit here as a person, as a player. Obviously I've talked about playing in the weather conditions, and I know most of the time the weather conditions are going to be good, but December football, January football is very important, and that's what we want to play here.

"We were very into all of the guys, so I don't want to just say that Josh was our only guy. Josh had a lot of things that we liked, and we felt like at the end of the process, if we can get Josh Allen, we're going to have a really good fit here."

The Wyoming team Allen played on: "The guy never complained. It's no secret there's nobody on Wyoming that's going to play in the NFL or probably even be in an NFL camp. You look at what his team did when he was on the field, they played Iowa and Oregon, listen, he's not going to beat Iowa and Oregon with that team. His only other loss was at Boise State, which that's a reputable team. When he was hurt, they lost two games, including one to San Jose State, who I think had only won like one game. He was that team."

On drafting a wide receiver before the sixth round: "It was not a strong receiver class to begin with. There were a few guys early that went there, two of them in the first ... but it started dropping off after that.

"We had to trust the board. We put a lot of time into it. I've been a part of it, where you do overreact for need at the time and you let good football players go. It's weird how it just kept falling for us was defensively. I felt bad. Daboll would come in there and I was apologizing to him. ... It kept falling to defense for a while until we got Wyatt Teller. You've got to stick to your board. We're not done. We're continuing to look. We'll see what we can make happen between now and the first game in September."

The possibility of adding former Cowboys wide receiver Dez Bryant: "Dez is a very good player. Is he the same player he was five years ago? Probably not, but he can still play in this league and still help a team. I've never personally met Dez, so we would have to bring him in and visit with him and see if he was a fit. We were generally focused on what we were going to get in the draft before looking at that. So it's something we'll talk about, but that's probably as far as I could say right now.

"And I do think there could still be guys out there. You know, I mentioned a couple times (Jeremy) Maclin and (Eric) Decker last year came out there. What happens is, teams look at what they drafted and they say, 'yeah, you know what, I don't want to pay this guy $5 million or $6 million, I just drafted a guy that I want to get on the field anyhow.' "

A possible contract extension for wide receiver Kelvin Benjamin: "We really haven't focused on it, to be honest. I probably would wait at least until the summer, and see how it's going at camp ... see how he fits into Daboll's system. We've got a new wide receiver coach, new OC, so I just want to see that jell and then kind of decide what the best move is going forward with Kelvin."